Guam is in the western waters of the North Pacific Ocean. Geographically, it falls in Micronesia near Hawaii, but Guam is a United States territory.

The island is thought to be inhabited by humans since about 4000 BC when it was discovered by Southeast Asians, the distant ancestors of the local Chamorro people.

The island has three residential parts: 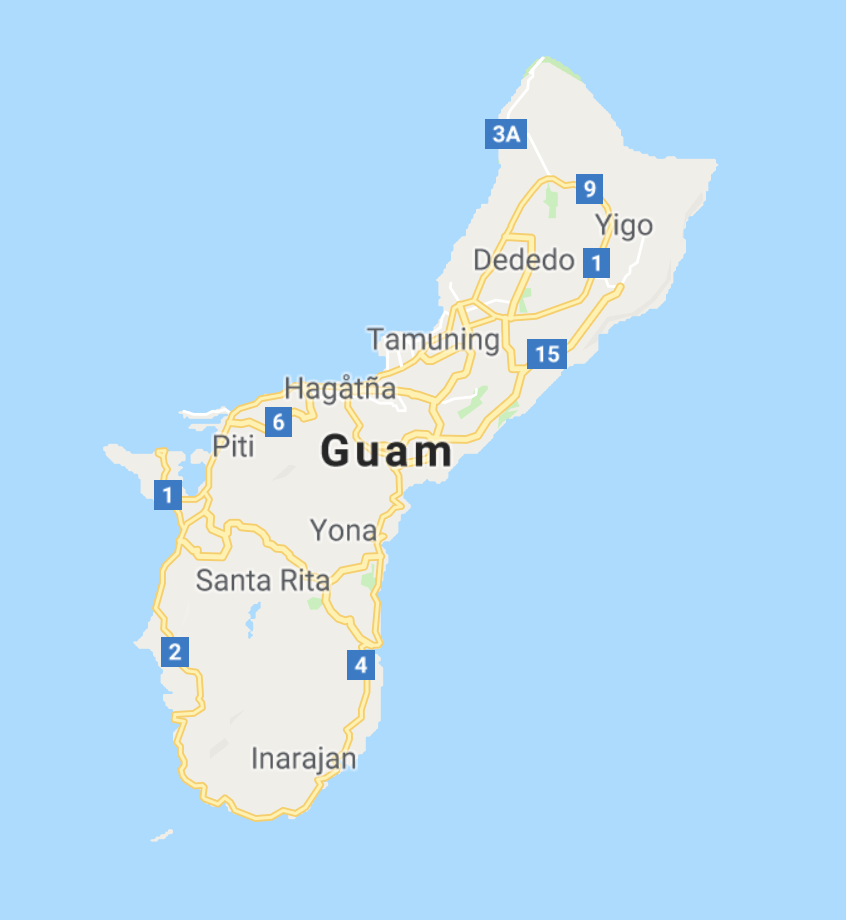 Southern Guam is the most scenic with rolling hills and greenery, whereas the central part has a bustling nightlife. Northern Guam is a residential area with the majority of the island’s population.

Things To Do in Guam

The first thing that pops into your mind when visiting any island is “the beach”. Right? Then, the Gun Beach in Guam is by far the best, even though it ‘s a little hard to access. 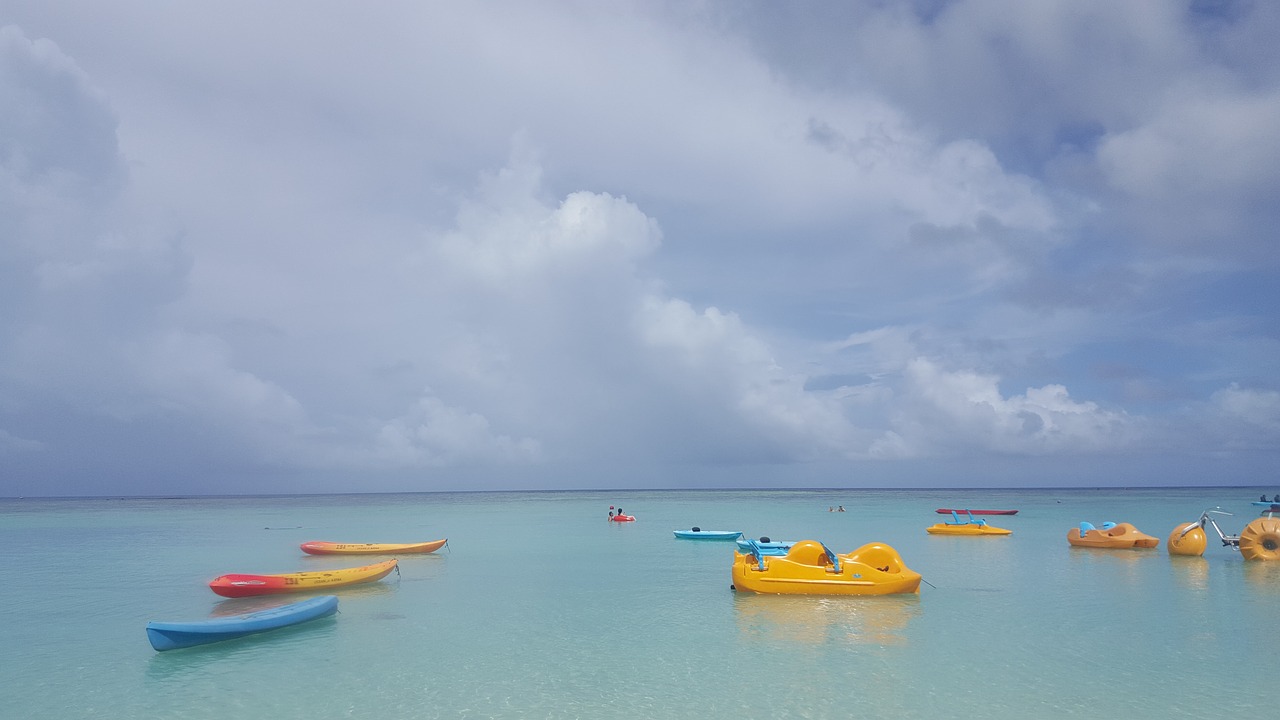 Tumon is the center of tourism on Guam. Attractions include beaches that are also wildlife reserves, a large aquarium, and various shows similar to the ones in Las Vegas.

Another water excitement in Guam is the Fish Eye Marine Observatory which is just a swim away from Piti Bomb Holes Preserve, which is a great place to Snorkle. 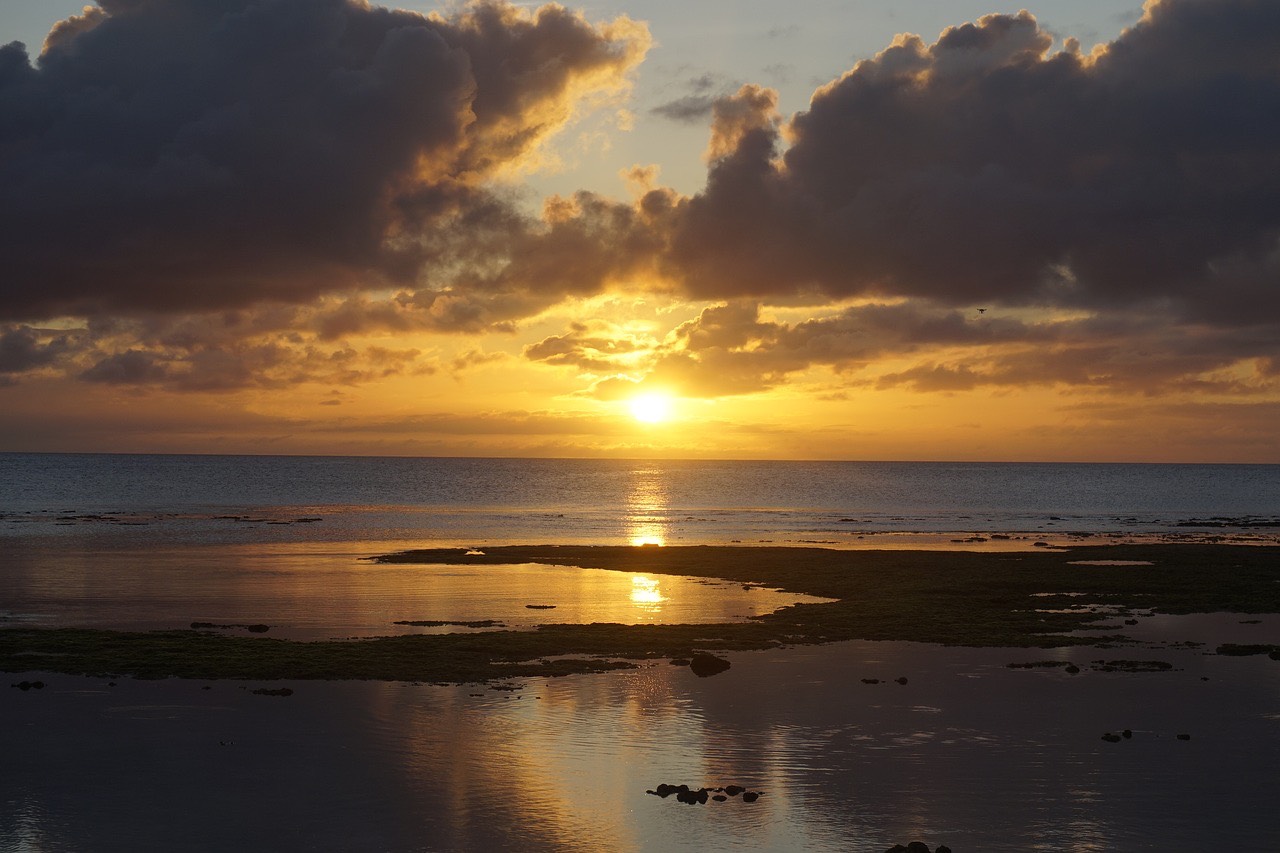 Night markets are a thing in Guam, and their motive is to attract tourists. The Mangilao Night market is affordable and exotic whereas the Chamorro Night Market is more expensive.

The Micronesian Diver’s Association has information on the many local dive sites as well as boat dives around the island. Highlights include:

Former battlefields, gun emplacements, trenches, and historic structures all serve as silent reminders of the bloody World War II battles that ensued on Guam. While the park is known for its historical resources, the warm climate, sandy beaches, and turquoise waters attract both visitors and locals.

The Chamorro people, also known as the Chamoro or Chamoru, are indigenous to Guam. They possess a culture that mixes Asian, Spanish, and American cultures, and in general, the people are gregarious and welcoming to visitors.

Observe common courtesies and tend to err on the modest side, especially with clothing. Other cultures found in Guam include those from the Philippines, Japan, China, and South Korea.

The Chamorro population is predominantly but not exclusively Catholic, with Protestantism also popular. On Guam, rosaries take the place of large formal gatherings to remember those who have passed away, and such congregations can occur for up to 20 years after someone has passed. 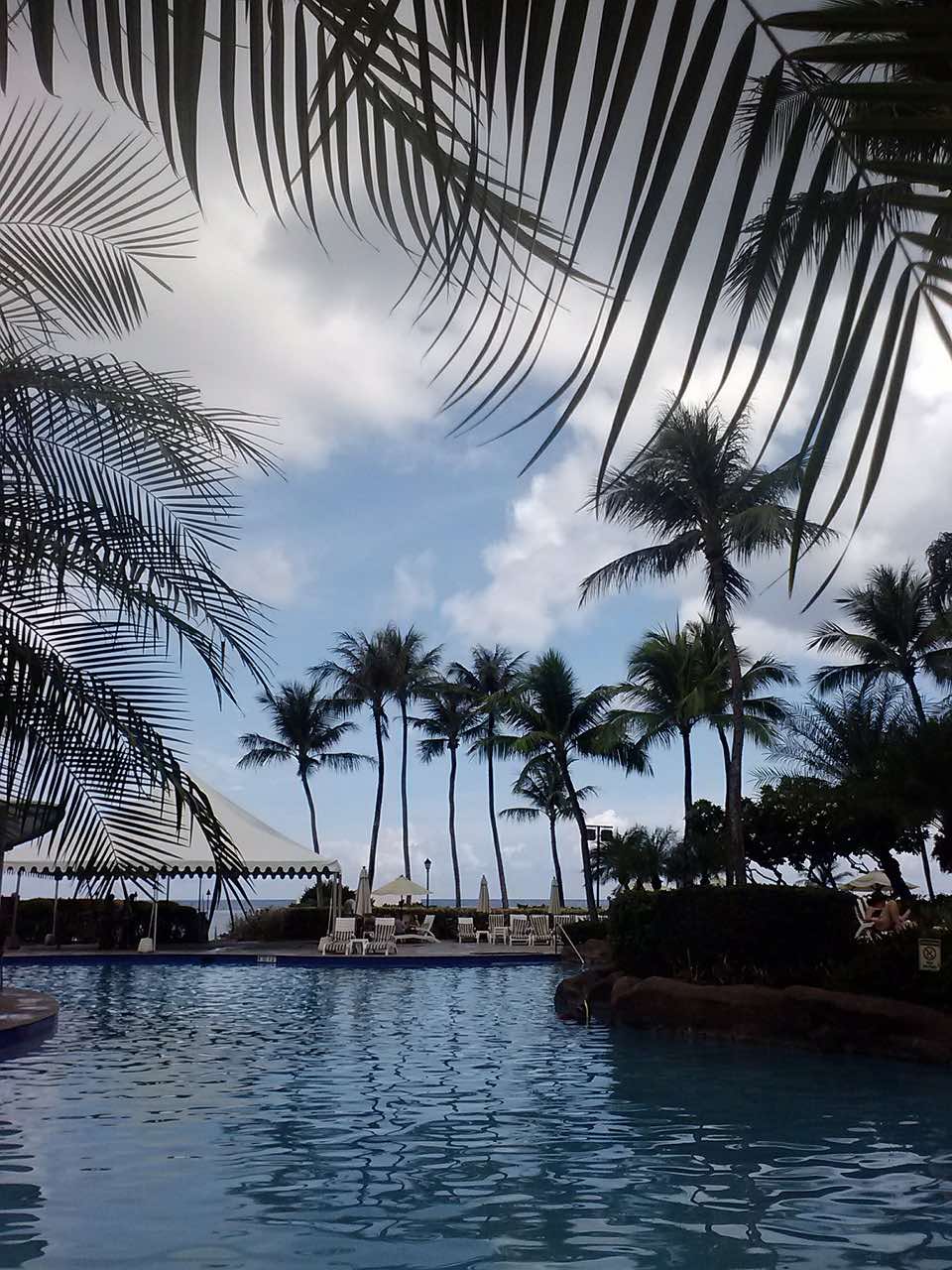 Guam enjoys a tropical marine climate: generally warm and humid, moderated by northeast trade winds. Hence whether you travel during summer or winter, there is seldom any difference.

The dry season runs from January to June, the rainy season from July to December. During the rains, squalls are common, though destructive typhoons are rare.

The summer lasts from January to June and the rainy season lasts from July to December. To enjoy Guam without interruptions, it is best to visit in the summer. 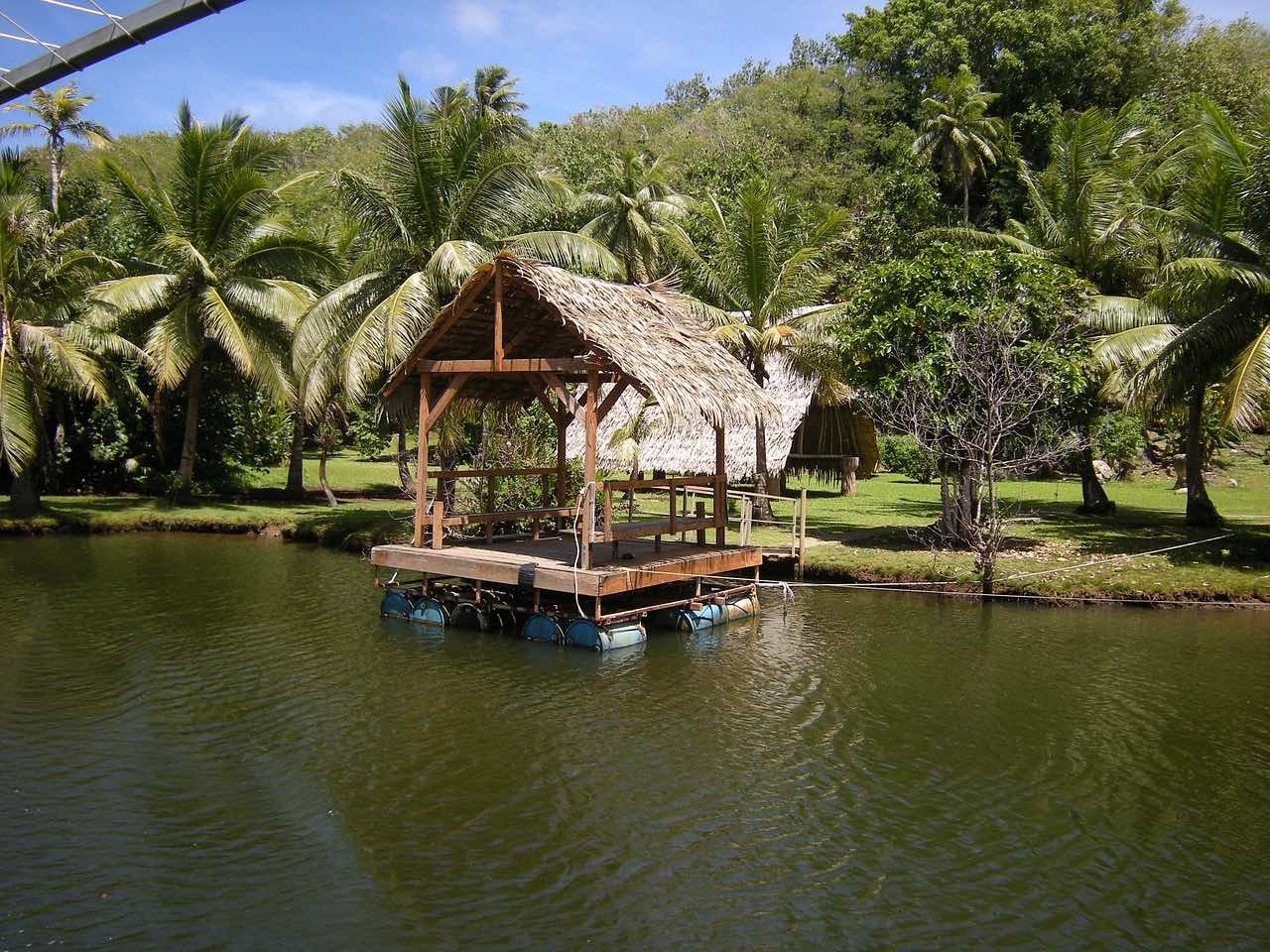 English and Chamorro are the official languages of Guam. Persons employed in the tourist industry will typically have a working knowledge of Japanese.

Despite its small population, Guam has a range of restaurants. Major hotels and restaurants serve continental meals and ethnic dishes.

Travelers who venture further will find Chamorro, Japanese, Korean, Thai, Vietnamese, Filipino, Chinese, Mexican, and European restaurants, each with its own distinct ambiance.

Furthermore, since you are on an island, fresh seafood is bountiful. Fresh fish, octopus, and crab are either grilled or baked with vegetables or fruit, sashimi, and in other ways unique to the Pacific.

Locals pride themselves in barbecuing and it is a frequent event in Guam. Families and friends often get together and for BBQs, so if you visit, ask about BBQs. It’s a good chance you’ll get invited!

Observe caution when engaged in water activities on Guam, as in any coastal area, as currents can be swift and unpredictable, depending on the season. During the rainy season (from about August until March), water can pool unevenly on road surfaces.

Pooling of rainwater can lead to flooding of roads in the southern half of Guam, which does not have sewer drainage built under the road surfaces. Furthermore, many roads are in disrepair and potholes are frequent, which can easily blow out tires.

Violent crime is fairly low, but property crime tends to be high, so safeguard valuables in vehicles. Rental cars have stickers and can be targeted by thieves. Guam is in a major earthquake zone, and these occur every few years. That said, there have been few casualties to date.

Walking is generally common in the central business districts of Hagåtña and Tumon. Walking elsewhere around the island is uncommon due to heat, dangerous vehicular traffic, and the lack of sidewalks.

Within villages, however, it is common to walk short distances between households, and to small villages stores, churches, mayoral offices, and other community meeting places.

Driving is fairly simple and similar to the mainland US. The main route on the island is Marine Corps Drive/Guam Route 1 (Better known as Marine Drive).

Traffic safety: Island-wide, the speed limit is 35mph. However, be careful and defensive while driving as it is common to see vehicles moving at far greater speeds, driving through red lights, tailgating, and cutting through traffic without signaling.

Note: Many of the older roads were paved using coral aggregate, causing them to be excessively slippery in rain. While these roads are slowly being replaced, they still exist – primarily in the southern part of the island – and can cause a vehicle to spin out even when driving under the speed limit; so take caution.

Buses are available, through both private companies and the governmentally operated Guam Regional Transit Authority (GRTA).

Bicycling is most common in the Tumon tourist area, and, to a lesser extent, the length of the Hagåtña-Tamuning beachfront sidewalk. Bicycles are available for rent through most hotels and a number of local businesses.

Safety Note: While bicycling is possible in other areas of the island, it is not advised due to potholes, erratic driving, stray dogs, rainy weather, and hilly regions (in the southern part of the island).

There are no ferry services from Guam or to Guam, but it can very well be a destination for cruise ships. That said, the sole way to get to the island is to take a flight.

The entry requirements for Guam are largely the same as those for the U.S, and nationals of all countries not needing a visa to enter the U.S. do not need a visa to enter Guam, although they may require an ESTA travel authorization.

Foreign citizens may enter Guam using one of three options:

If you are using the Guam-CNMI Visa Waiver Program, you do not need to apply for a travel authorization prior to going. Citizens of non-VWP countries must apply for a U.S. visa at any U.S. embassy.

Mainland Chinese (including Macau) citizens in possession of a machine-readable passport, completed Form I-736 (Guam-CNMI Visa Waiver Information form) and Form I-94 (Arrival-Departure Record) may enter the CNMI only visa-free for up to 45 days (travel to Guam still requires applying for a visa in advance).

As an American territory, the power used here is standard 110 V. The Type A and Type B sockets work here. American natives need no adapter or converter to make their appliances work, but Asian and European travelers would need both.