Spain is an amalgamation of tradition and modernity. The awe-inspiring landscape and medieval monuments coupled with an active nightlife and modern infrastructure will give you an unforgettable experience.

Spain is famous for its friendly inhabitants, relaxed lifestyle, its cuisine, vibrant nightlife, and world-famous folklore and festivities, and its history as the core of the vast Spanish Empire.

Things To Do In Spain

Spain has several interesting cities worthy of your visit.

Madrid is the capital city, rich in museums and architecture. Barcelona is another modern city with beautiful architecture and rich nightlife. Granada is a winter paradise. Valencia is a beach town.

Cordoba has a stunning mosque. Bilbao is a busy industrial city. Cadiz is an old town with historic charm. Seville has a beautiful cathedral. 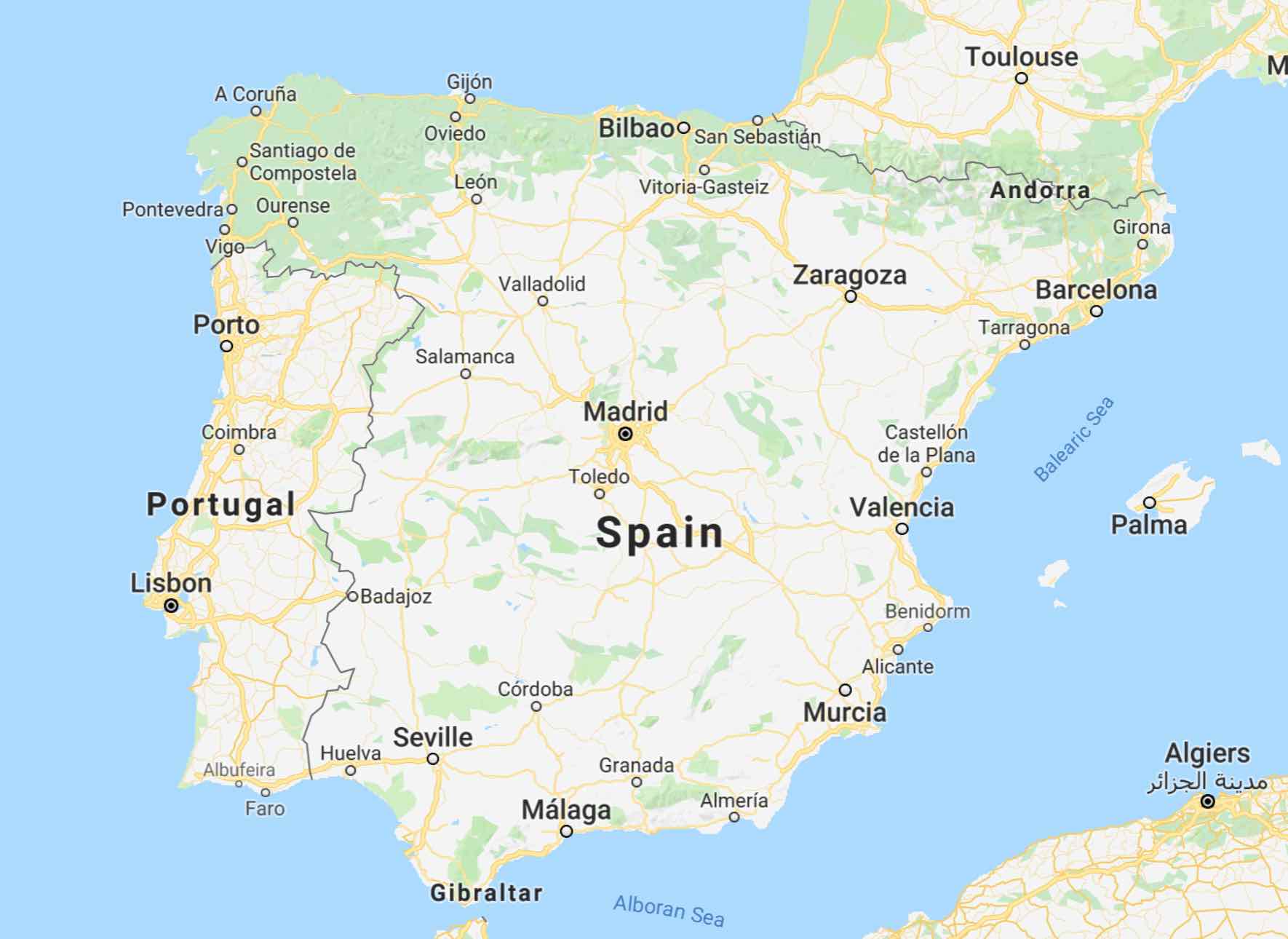 For a complete list of things to do in Madrid, please visit our Madrid Travel Guide.

Historically, Spain has been an important crossroads: between the Mediterranean and the Atlantic, between North Africa and Europe, and as Europe beginning colonizing the New World, between Europe and the Americas.

In the south of Spain, Andalusia holds many reminders of old Spain. Cadiz is regarded as one of the oldest continuously-inhabited cities in western Europe, with remnants of the Roman settlement that once stood here.

Nearby, Ronda is a beautiful town atop steep cliffs and noted for its gorge-spanning bridge and the oldest bullring in Spain.

Cordoba and Granada hold the most spectacular reminders of the nation’s Muslim past, with the red-and-white striped arches of the Mezquita in Cordoba and the stunning Alhambra palace perched on a hill above Granada.

Seville, the cultural center of Andalusia, has a dazzling collection of sights built when the city was the main port for goods from the Americas, the grandest of which is the city’s cathedral, the largest in the country.

Moving north across the plains of La Mancha into Central Spain, picturesque Toledo stands as perhaps the historical center of the nation, a beautiful medieval city sitting atop a hill that once served as the capital of Spain before Madrid was built.

North of Madrid and an easy day-trip from the capital city is El Escorial, once the center of the Spanish empire during the time of the Inquisition, and Segovia, noted for its spectacular Roman aqueduct which spans one of the city’s squares.

Further north in Castile-Leon is Salamanca, known for its famous university and abundance of historic architecture.

Galicia in northwestern Spain is home to Santiago de Compostela, the end point of the old Way of St. James (Camino de Santiago) pilgrimage route and the supposed burial place of St. James, with perhaps the most beautiful cathedral in all of Spain at the heart of its lovely old town.

Northeastern Spain has a couple of historical centers to note: Zaragoza, with Roman, Muslim, medieval and Renaissance buildings from throughout its two thousand years of history, and Barcelona with its pseudo-medieval Barri Gòtic neighborhood.

Apart from these cities, there are also natural gems that are worth a visit.

Gran Canaria is an island with a diverse climate. Costa Brava is known for its sandy beaches. La Rioja is famous for its wine. The Sierra Nevada will offer you hiking trails. Tenerife is a land of gorgeous vegetation and rich biodiversity. Ibiza is known for its crazy clubbing.

The most popular beaches in Spain are the ones along the Mediterranean coast and on the Canary Islands.

The mountains of Sierra Nevada in the south, the Central Cordillera and the northern Pyrenees are the best places.

Spain is popular for Canyoning (going in a bottom of a canyon, which is either dry or full of water). It combines elements from swimming, climbing, and jumping. Needless to say, it’s a fun thing for any adventure lover.

In the last century, Spain’s unique position in Europe brought forth some of the leading artists of the Modernist and Surrealist movements, most notably the famed Picasso and Salvador Dalí.

Spain’s two largest cities hold the lion’s share of Spain’s most famous artworks. Madrid’s Museum Triangle is home to the Museo del Prado, the largest art museum in Spain with many of the most famous works by El Greco, Velázquez, and Goya as well as some notable works by Italian, Flemish, Dutch and German masters.

Nearby sits the Reina Sofía, most notable for holding Picasso’s Guernica but also containing a number of works by Dalí and other Modernist, Surrealist and abstract painters. Lastly, Thyssen-Bornemisza museum is a baron’s collection of classical art.

Barcelona is renowned for its stunning collection of modern and contemporary art and architecture. This is where you will find the Picasso Museum, which covers the artist’s early career quite well, and the architectural wonders of Antoni Gaudi, with their twisting organic forms that are a delight to look at.

Outside of Madrid and Barcelona, the art museums quickly dwindle in size and importance, although there are a couple of worthy mentions that should not be overlooked.

Bilbao in the Basque Country of northern Spain is home to a spectacular Guggenheim Museum designed by Frank Gehry that has put the city on the map. A day trip from Barcelona is the town of Figueres, noted for the Salvador Dalí Museum, designed by the Surrealist himself.

Spain has a lot of local festivals that are worth going to.

Trains are the best way to travel long distances within the country. However, short distance travel can be a bit annoying. Luckily, the bus network is extensive. You can reach nearly all towns via a bus. If you can afford to spend a hefty amount on travel then journeying by car is a good option. Taxis are another means of transportation when traveling within a single city, but they are expensive.

Taxis in Spain are generally safe and easy to find, especially in major cities. Also, car hire is easy, but you need to be over 21. Roads are generally in good condition. Cars drive on the right side of the road.

Spanish is the lingua franca here, but English is taught in schools. You will be able to talk with the locals if you have a basic knowledge of Spanish.

The currency in use in Euro. The currency exchange is available in any bank, and at most travel agencies, major hotels, and airports. All major international credit cards are easily acceptable and ATMs are available throughout the country.

Accommodations can be costly. You can book a room at Paradores, a chain of hotels, which tend to be affordable. A single room will cost you around $60-$75. If you travel to offbeat locations, you can live in a casa rural. A casa rural is a house that you can rent; they tend to be located away from the main cities so that you can escape the hustle and bustle of the metropolis.

As for electricity, Spain uses type F sockets. You need to bring a travel adapter to fit the proper socket type. Check out the above-linked page to see the photos and other useful information.

The standard voltage is 230 V. Many of your devices may need a step-up transformer to match the electrical voltage.


Warning: Parameter 2 to posts_where_recent_post1() expected to be a reference, value given in /home/customer/www/artoftravel.tips/public_html/wp-includes/class-wp-hook.php on line 292


Warning: Parameter 2 to posts_where_recent_post() expected to be a reference, value given in /home/customer/www/artoftravel.tips/public_html/wp-includes/class-wp-hook.php on line 292