There are 13 traditional-cultural elements of India that have been inscribed on the UNESCO List of the Intangible Cultural Heritage of Humanity.

The Indian ICH list is an attempt to recognize the diversity of the Indian culture embedded in its rich and diverse social demographics.

The UNESCO’s Convention for safeguarding of Intangible Cultural Heritage (ICH) classifies cultures and traditions into 5 broad domains. These are:

The 13 traditional-cultural elements of India are:

UNESCO proclaimed the tradition of Vedic chant a Masterpiece of the Oral and Intangible Heritage of Humanity on November 7, 2008. 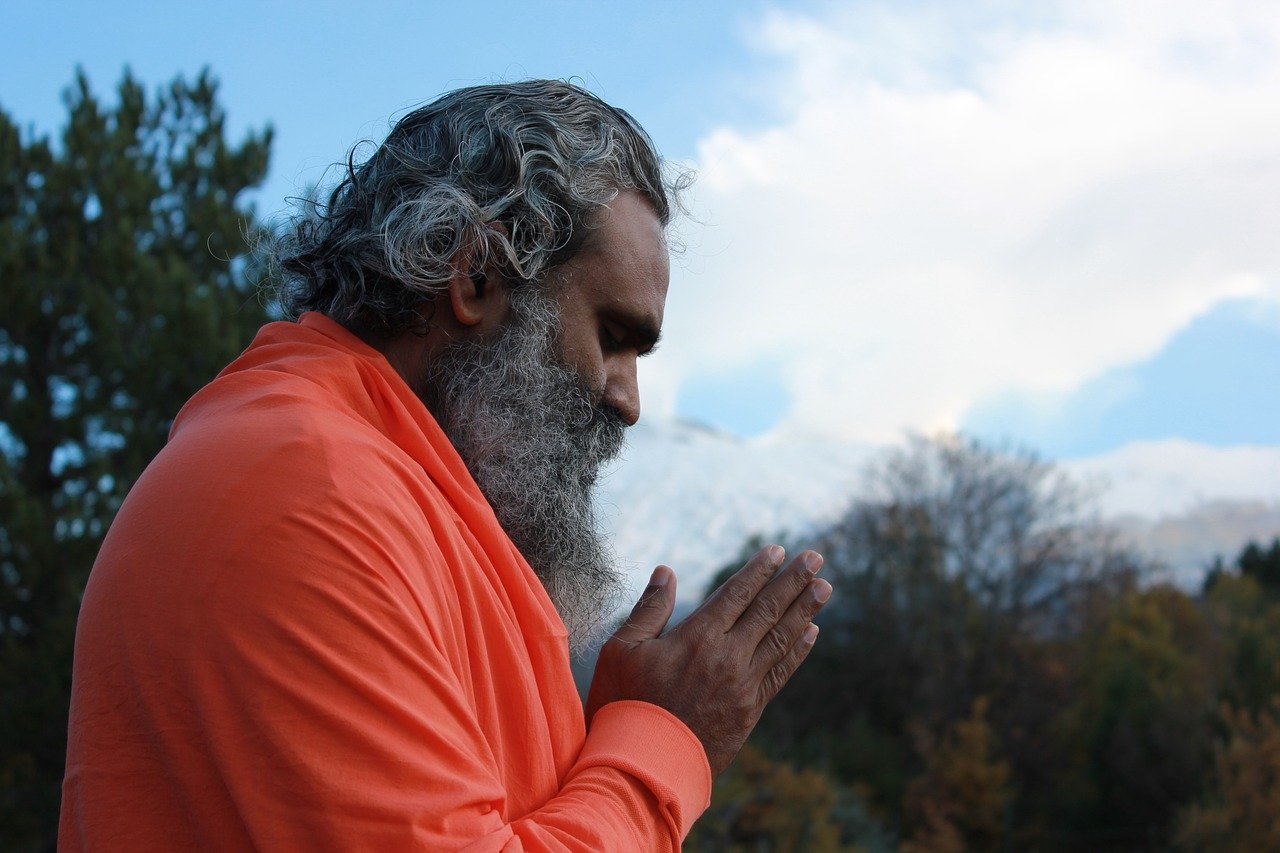 The four Vedas (Rig, Yajur, Sama and Atharva) are not books in the usual sense, though within the past hundred years each veda has appeared in several printed editions. They comprise rather tonally accented verses and hypnotic, abstruse melodies whose proper realizations demand oral instead of visual transmission.

Kutiyattam, is a traditional performing art form in the state of Kerala. It is a combination of ancient Sanskrit theatre with elements of koothu, an ancient performing art from the Sangam era.

It is officially recognized by UNESCO as a Masterpiece of the Oral and Intangible Heritage of Humanity. 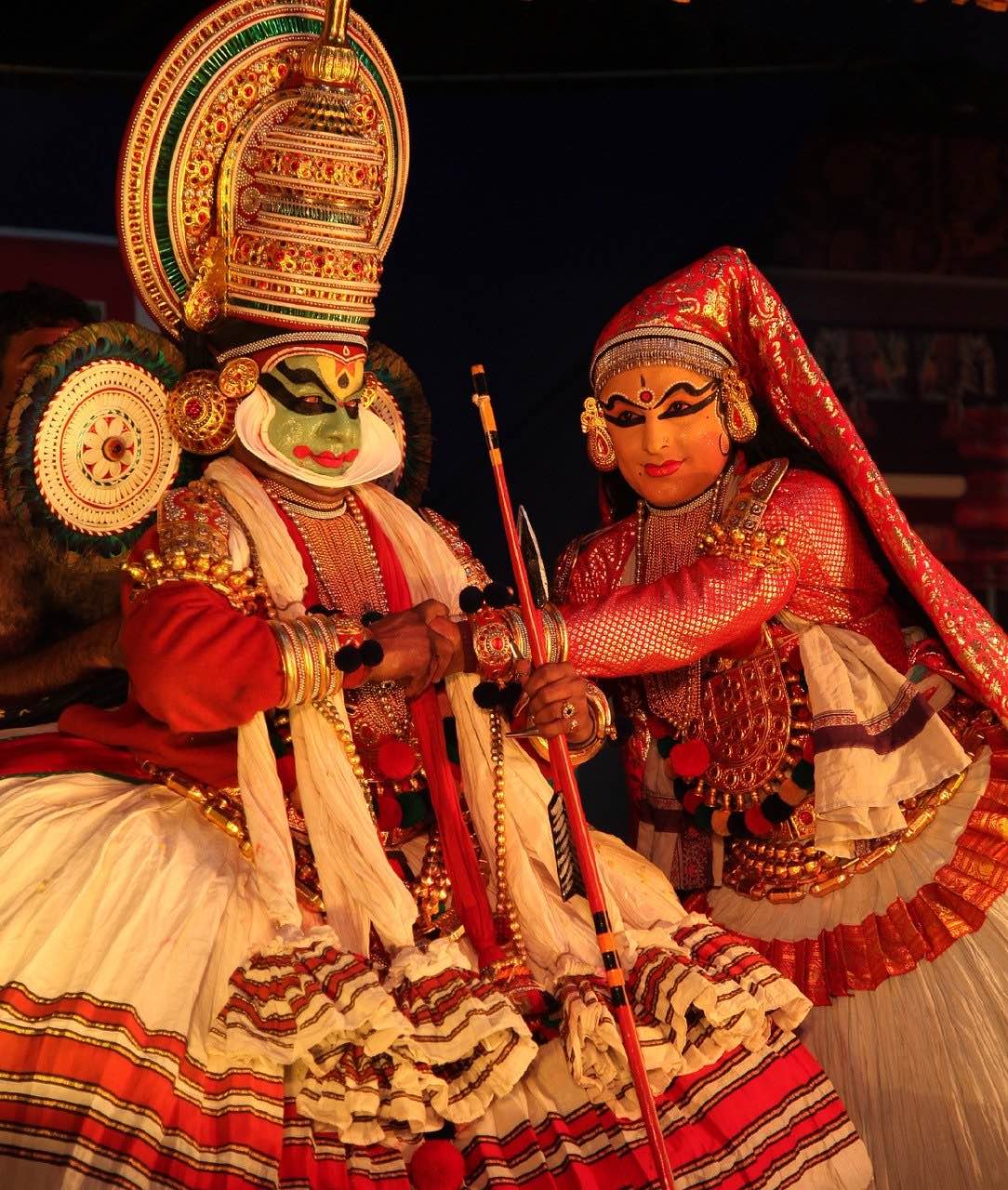 It is the only surviving art form that uses drama from ancient Sanskrit theatre. It has a documented history of a thousand years in Kerala, but its origins are unknown.

Ramman is a religious festival and ritual theatre of the Garhwal region in India. It is a festival of the Hindu community in the Saloor Dungra village of the Painkhanda Valley in the Chamoli district in Uttarakhand, India. 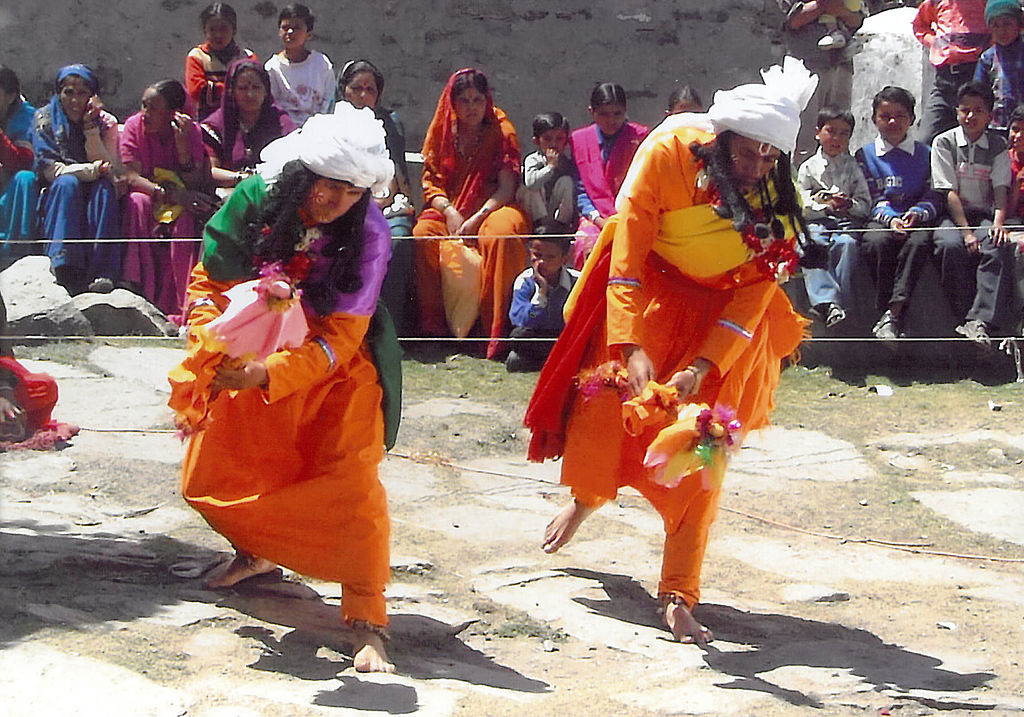 The festival and the eponymous art form are conducted as an offering to the village deity, Bhumiyal Devta, in the courtyard of the village temple. The Ramman is unique to the village and is neither replicated nor performed anywhere else in the Himalayan region.

Ramman combines the sacred and the social, the ritualistic with revelry and expresses the history, faith, lifestyle, fears and hopes of the Saloor Dungra villagers through a mesh of oral, literary, visual, kinetic and traditional craft forms.

It is an annual affair that children learn by watching. The various skills it involves in terms of dance, singing and drumming are passed down across hereditary communities orally.

Note: The onslaught of globalization and technology and lack of financial or artistic compensation have adversely impacted the ritual and traditional performances of the Ramman. Being peripheral to mainstream art forms, the awareness of the Ramman beyond its immediate borders is small and it stands the risk of becoming extinct in time.

Mudiyett or Mudiyettu is a traditional ritual theatre and folk dance drama from Kerala that enacts the mythological tale of a battle between the goddess Kali and the demon Darika. The ritual is a part of the Bhagavathi or Bhadrakali cult.

The dance is performed in Bhadrakali temples, the temples of the Mother Goddess, between February and May after the harvesting season.

Being a community based art form it is the community that has traditionally encouraged and trained the next generation to preserve the art form. There is no school or institution to give training in this art form and its survival depends almost exclusively on direct transmission through the Guru-Shishya Parampara (i.e. masters to disciples tradition).

In 2010, Mudiyettu was inscribed in the UNESCO’s Representative List of the Intangible Cultural Heritage of Humanity, becoming the second art form from Kerala after Koodiyattam.

Ramlila (literally ‘Rama’s lila or play’) is any dramatic folk reenactment of the life of Rama according to the ancient Hindu epic Ramayana or secondary literature based on it such as the Ramcharitmanas.

It particularly refers to the thousands of Hindu god Rama-related dramatic plays and dance events, that are staged during the annual autumn festival of Navratri in India.

After the enactment of the legendary war between Good and Evil, the Ramlila celebrations climax in the Dussehra night festivities where the giant grotesque effigies of Evil such as of demon Ravana are burnt, typically with fireworks.

Most Ramlilas in North India are based on the 16th century secondary work on Ramayana, Ramcharitmanas a verse form composition in the regional vernacular language by Tulsidas. These verses are used as dialogues in traditional adaptations.

Open-air productions are staged by local Ramlila committees, and funded entirely by the villagers or local neighborhoods in urban areas. The core team of performance artists train for the dance-drama, but the actual performance attracts impromptu participants from the audience and villagers.

This art form is a part of the Hindu culture, found for many gods and goddesses, but those of Rama, Durga (as Durga Puja) and Krishna (as Rasa lila) are the most popular and annual events in the Indian subcontinent.

Kalbelia or Kabeliya is a dance from Rajasthan, performed by the tribe of the same name. The dance is an integral part of their culture and performed by men and women.

The Kalbelia dance, performed as a celebration, is an integral part of Kalbelia culture. The dancers are women in flowing black skirts who dance and swirl, replicating the movements of a serpent.

The male participants play musical instruments, such as the pungi, a woodwind instrument traditionally played to capture snakes, the dufli, been, the khanjari – a percussion instrument, morchang, khuralio and the dholak to create the rhythm on which the dancers perform.

The dancers are tattooed in traditional designs and wear jewelry and garments richly embroidered with small mirrors and silver thread. As the performance progresses, the rhythm becomes faster and faster and so does the dance.

Kalbelia songs are based on stories taken from folklore and mythology and special dances are performed during Holi. The Kalbelia have a reputation for composing lyrics spontaneously and improvising songs during performances.

These songs and dances are part of an oral tradition that is handed down generations and for which there are neither texts nor training manuals. In 2010, the Kalbelia folk songs and dances of Rajasthan were declared a part of its Intangible Heritage List by the UNESCO.

Chhau dance, also spelled as Chau or Chhaau, is a semi classical Indian dance with martial, tribal and folk traditions, with origins in Eastern India. It is found in three styles named after the location where they are performed, i.e. the Purulia Chau of West Bengal, the Seraikella Chau of Jharkhand, and the Mayurbhanj Chau of Odisha. 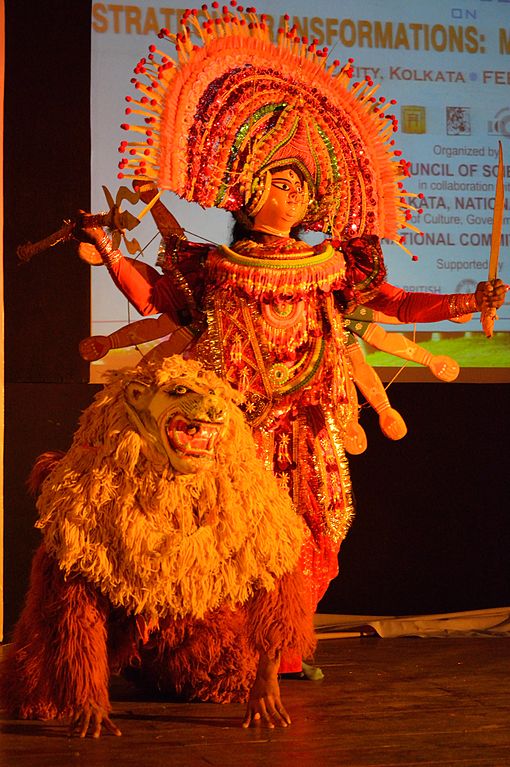 The dance ranges from celebrating martial arts, acrobatics and athletics performed in festive themes of a folk dance, to a structured dance with religious themes found in Shaivism, Shaktism, and Vaishnavism.

The stories enacted by Chhau dancers include those from the Hindu epics the Ramayana and the Mahabharata, the Puranas, and other Indian literature.

The dance is traditionally an all males troupe, regionally celebrated particularly during spring every year, and may be a syncretic dance form that emerged from a fusion of classical Hindu dances and the traditions of ancient regional tribes.

The recitation of sacred Buddhist texts in the Himalayan Ladakh region. These chants are a form of musical verse or incantation, in some ways analogous to Hindu, Christian or Jewish religious recitations. 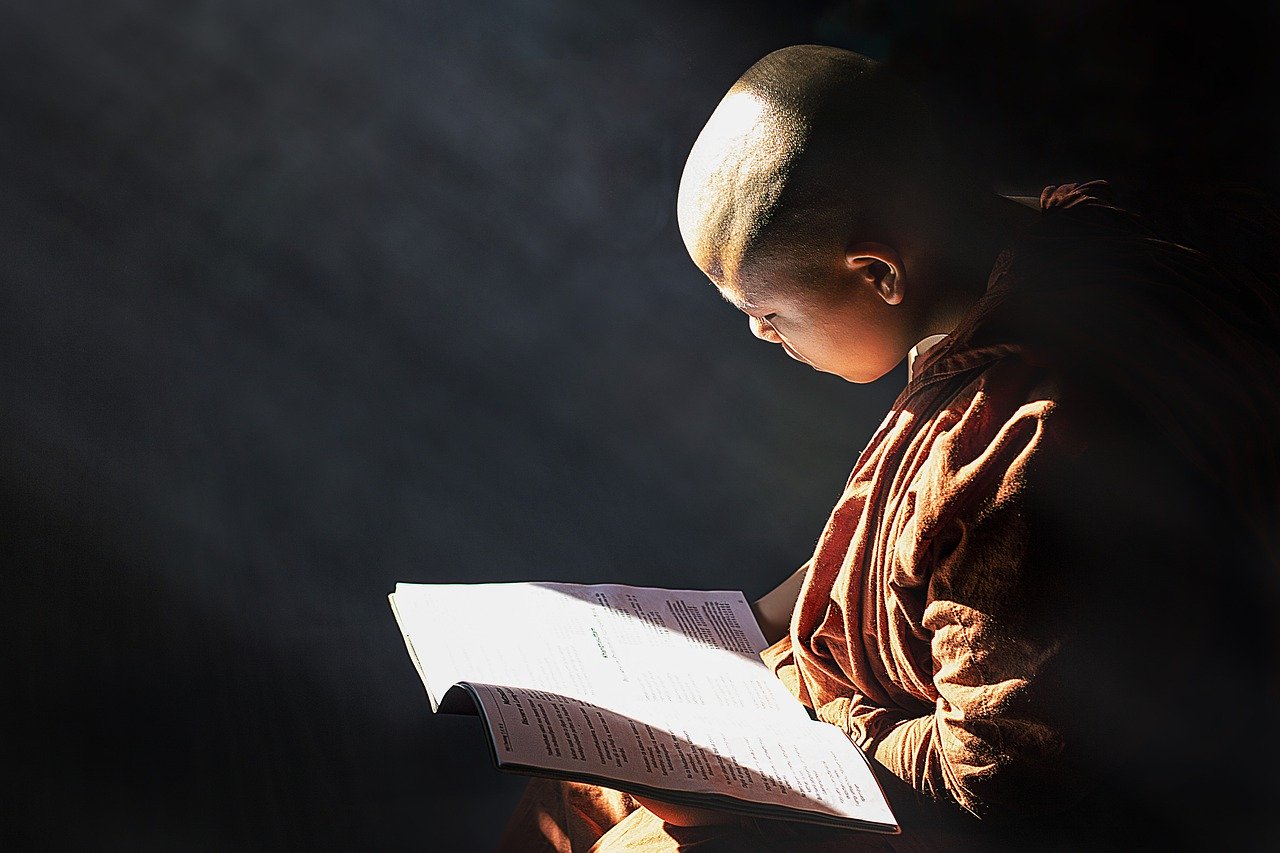 In Buddhism, chanting is the traditional means of preparing the mind for meditation, especially as part of formal practice. However it can also be done for ritualistic purposes.

In a more traditional setting, chanting is also used as an invocative ritual in order to set one’s mind on a deity, tantric ceremony, mandala, or particular concept one wishes to further in themselves.

Tibetan buddhist monks are noted for their skill at throat-singing, a specialized form of chanting in which, by amplifying the voice’s upper partials, the chanter can produce multiple distinct pitches simultaneously.

Manipuri Sankirtana is a form of performing art involving ritual singing, drumming and dancing performed in the temples and domestic spaces in Manipur State in India.

Through the performances which exhibit unparalleled religious devotion and energy, the performers narrate the many stories of Krishna often moving the spectators to tears.

The traditional brass and copper craft of utensil making among the Thatheras of Jandiala Guru Punjab has got the distinction of being inscribed on the Representative List of the Intangible Cultural Heritage of Humanity, UNESCO, in 2014.

The crafts colony was established during the reign of Maharaja Ranjit Singh (1883), the great 19th Century Sikh Monarch, who encouraged skilled metal crafters from Kashmir to settle in the heart of his kingdom in the Punjab. Jandiala Guru became an area of repute due to the skill of the Thatheras.

The craft of the Thatheras of Jandiala Guru constitutes the traditional techniques of manufacturing brass and copper utensils in Punjab. The Thatheras craft utensils are of both Utilitarian and ritualistic value made of copper, brass and kansa (an alloy of copper, zinc and tin).

The metals used are recommended by the ancient Indian school of medicine, Ayurveda. The crafting process carried out by a specific group of craftspeople, known as Thatheras, has a unique ethnic and historical identity with an oral tradition that underpin their skill. The very name of the community – ‘Thatheras’ is identical with the name of the element.

Obviously, yoga! Namaste world! 🙂 Yoga is a group of physical, mental, and spiritual practices or disciplines which originated in ancient India. Yoga is one of the six orthodox schools of Hindu philosophical traditions. 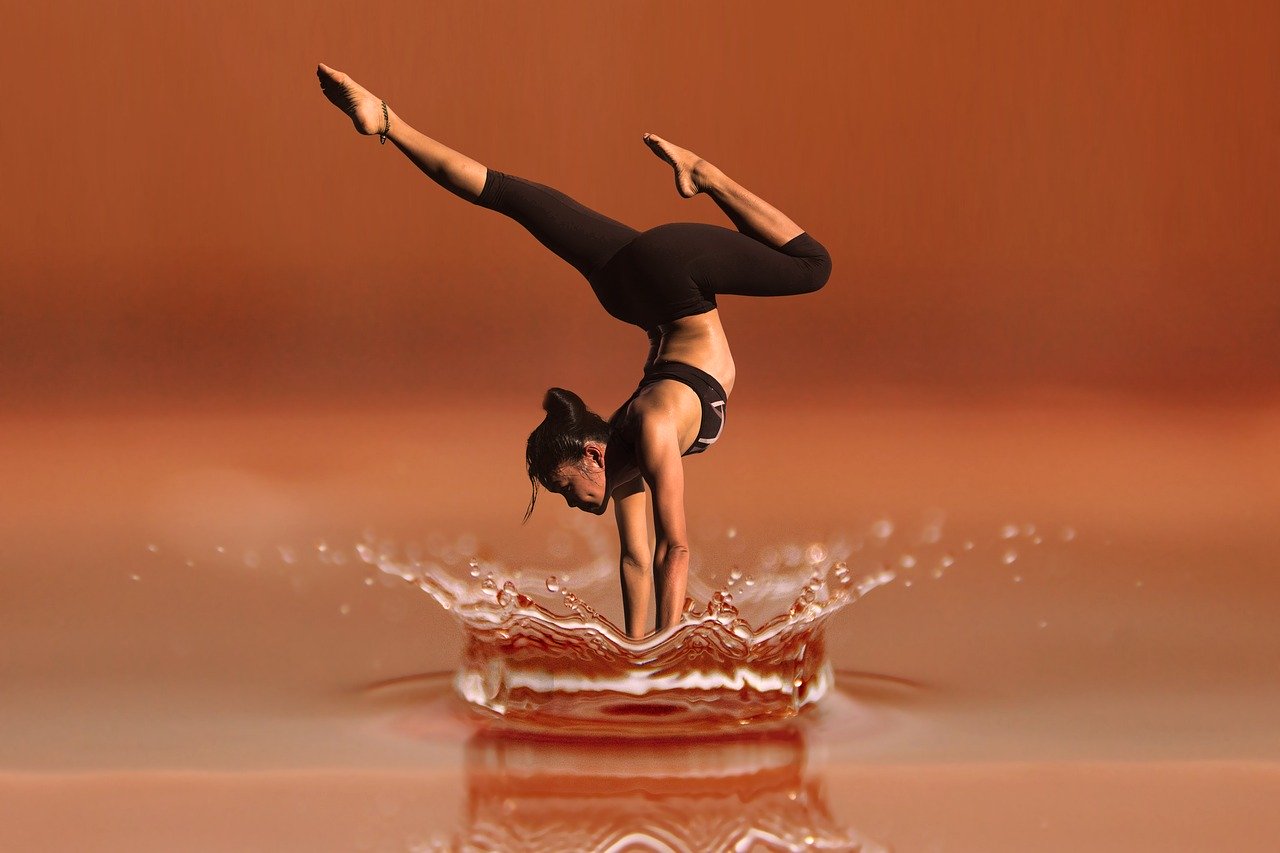 There is a broad variety of yoga schools, practices, and goals in Hinduism, Buddhism, and Jainism. The practice of yoga has been thought to date back to pre-Vedic Indian traditions; possibly in the Indus valley civilization around 3000 BC.

The Yoga Sutras of Patanjali, the most popular authoritative text on yoga, dates from the 2nd century BC. It has gained prominence in the west in the 20th century after being first introduced by Swami Vivekananda.

Nowruz (Persian: “new day”‘) has Iranian and Zoroastrian origins; however, it has been celebrated by diverse communities for over 7,000 years in Western Asia, Central Asia, the Caucasus, the Black Sea Basin, the Balkans, and South Asia. 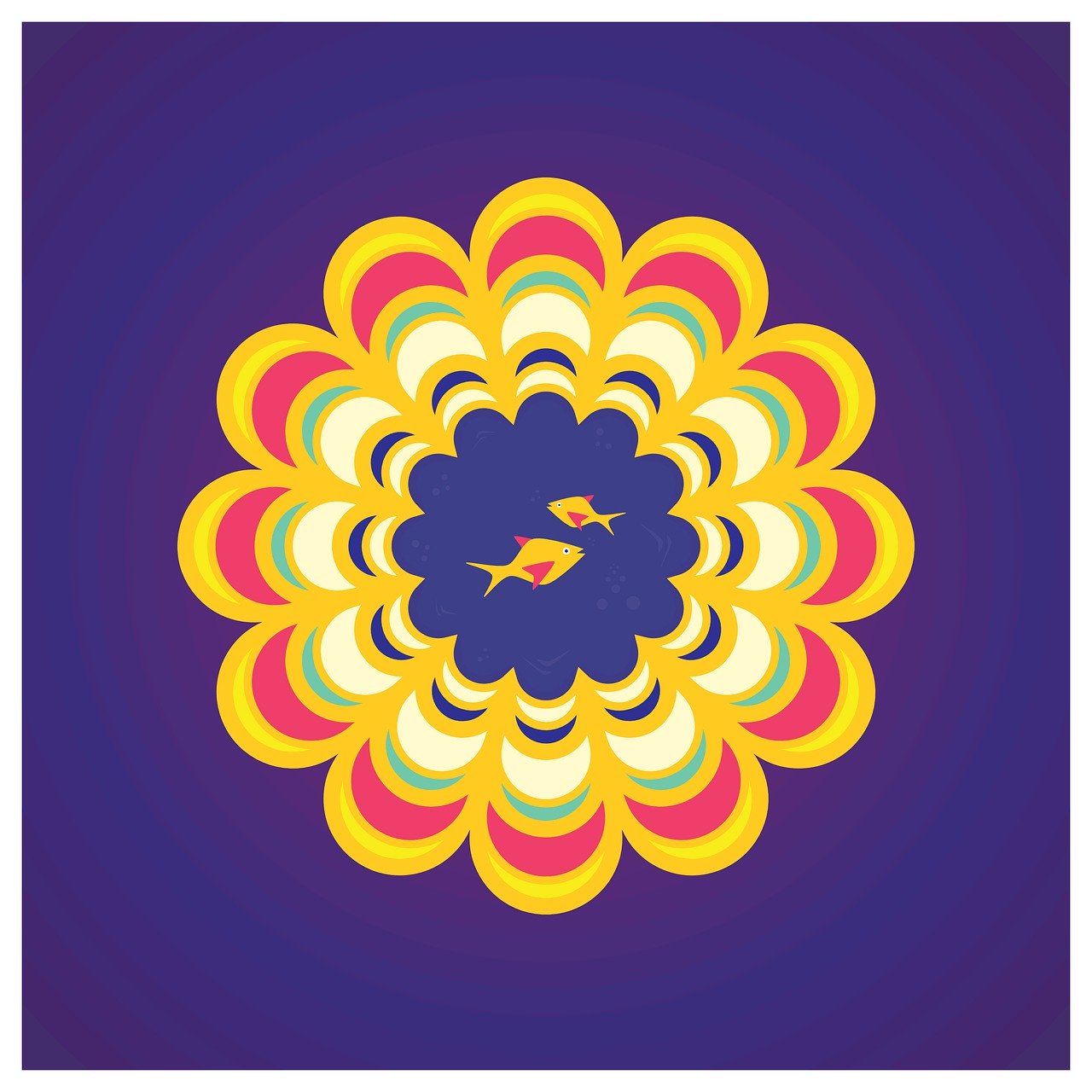 Tradition of Nowruz in Northern India dates back to the Mughal Empire; the festival was celebrated for 19 days with pomp and gaiety in the realm. However, it further goes back to the Parsi Zoroastrian community in Western India, who migrated to the Indian subcontinent from Persia during the Muslim conquest of Persia of 636–651 AD.

In the Princely State of Hyderabad, Nowruz was one of the four holidays where the Nizam would hold a public Darbar, along with the two official Islamic holidays and the sovereign’s birthday.

Kumbh Mela is a major pilgrimage and festival in Hinduism. It is celebrated in a cycle of approximately 12 years at four river-bank pilgrimage sites: the Prayagraj (where three rivers Ganges, Yamuna, and Sarasvati meet), Haridwar (river Ganges), Nashik (river Godavari), and Ujjain (river Shipra). 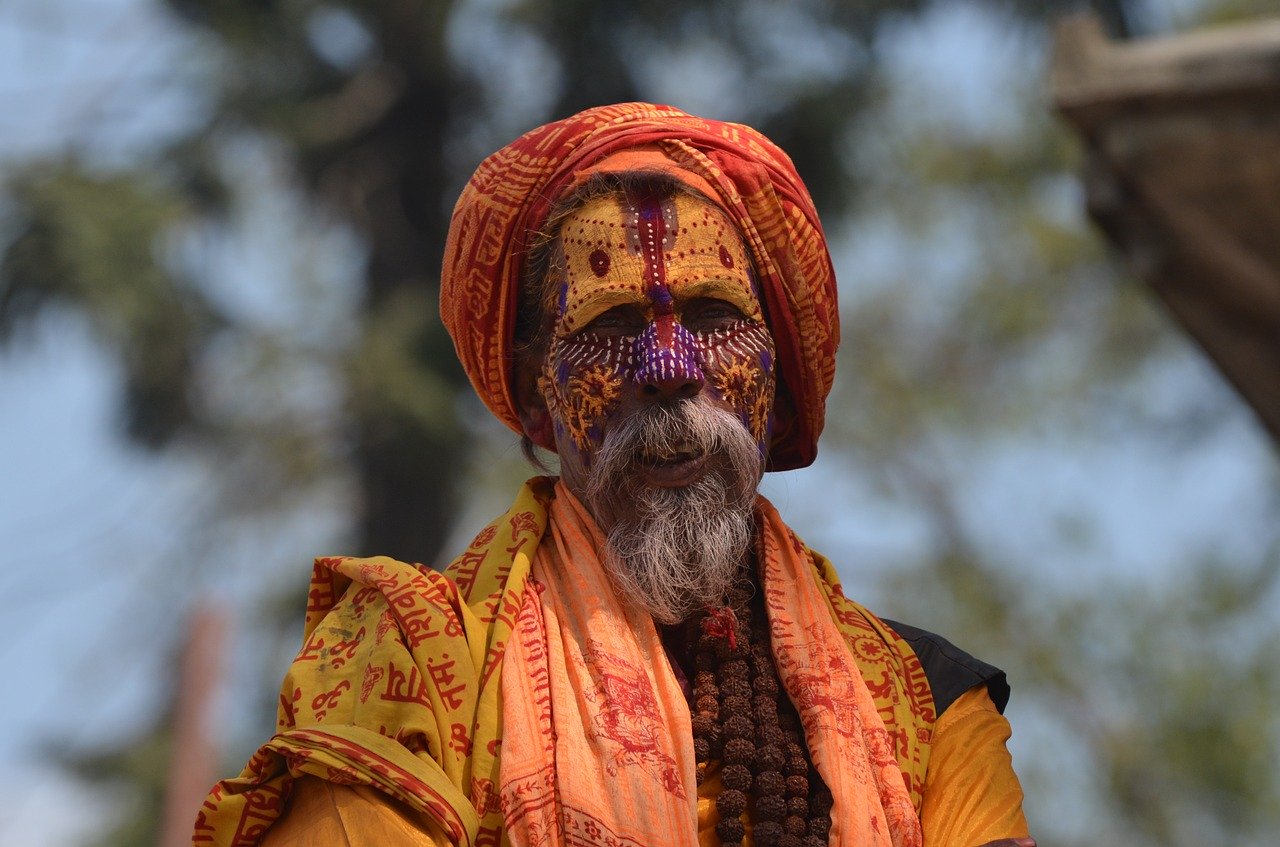 The festival is marked by a ritual dip in the waters, but it is also a celebration of community commerce with numerous fairs, education, religious discourses by saints, mass feedings of monks or the poor, and entertainment spectacle.

The seekers believe that bathing in these rivers is a means to atonement (penance) for past mistakes, and that it cleanses them of their sins.

The festival is traditionally credited to the 8th-century Hindu philosopher Adi Shankara, as a part of his efforts to start major Hindu gatherings for philosophical discussions and debates along with Hindu monasteries across the Indian subcontinent.

The purpose of such a list is to preserve intangible human elements that help demonstrate the diversity of cultural heritage and raise awareness about its importance.

Some of the criteria for inclusion in the representative list are if the inscription of the element will ensure visibility and awareness of it and if the element has been nominated after having “the widest possible participation” of the community, group or individuals concerned and with their free, prior and informed consent.