J&K, as it is called, is one of the most beautiful state in India. Emperor Jahangir once said that if there was a paradise on Earth, it would be Kashmir. After the partition of India in 1947, Kashmir’s beauty became tainted by terrorism.

In recent years, tourism has increased again (although in a limited way). The increase in tourism may not be much, but it encourages tourists to take a chance and witness the ethereal wonder.

For the purposes of practicality, we’ll divide the touristy spots into three regions.

Things To Do In Jammu

Jammu region has a Hindu majority, unlike the Jammu and Kashmir as a whole which has a Muslim majority.

The most common language in Jammu is Dogri.

The people in Jammu have cultural similarities with their Punjabi neighbors to the south and have been ruled by Punjabi Maharajas over the course of history, but the hilly terrain of the land in contrast of the plains of Punjab has also made the people distinct in many ways.

Jammu is also known as The City Of Temples. Below are some of the famous ones.

Katra is a small town in the foothills of the Trikuta Mountains famous for the Vaishno Devi Temple. It attracts millions of devotees every year. 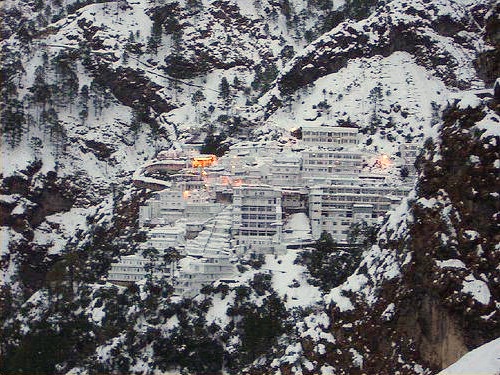 Vaishno Devi, also known as Mata Rani, Trikuta and Vaishnavi, is a manifestation of the Hindu Goddess Mata Adi Shakti also known as Chandi or Durga.

The words “maa” and “mata” are commonly used in India for “mother”, and thus are often used in connection with Vaishno Devi.

Things To Do In Ladakh

Things To Do In Kashmir

WARNING: Travel to Kashmir is strongly discouraged due to terrorist activity. Pakistan-occupied Kashmir (POK)  and Azad Kashmir are both extremely dangerous. If you are planning to travel, seek help from local Army unit and follow their advise and leads.

Warning aside, Kashmir does not just have gorgeous scenery, but it also offers adventure sports. Whether it is white water rafting at Pahalgam or paragliding in Astanmarg Harwan, every place has something to offer.

The top two tourist hubs in Kashmir are:

Gulmarg is popular for winter sports, as it has the highest slopes in Asia. The facilities are not up to European standards, but they still have the raw materials to engage an adventurer.

A ride on the cable car up Apharwat Peak is a must, and why not? It is the highest gondola in the world.

Surrounding the shores of Dal Lake is a colorful Tulip Garden planted by the Tourism Board of India. Designed in 2009, it is one of a kind.

Badaam Vaari is another popular garden in Kashmir, but it is no flower garden. This garden has grown almond trees since the 16th century.

To get an idea of the essence of Kashmir visit Sonamarg, Kokernag, or Pahalgam.

The Srinagar airport is the only one nearby and it only offers domestic flights. Delhi and Mumbai are the best cities to catch a flight to Srinagar. Another great option is to take a road trip.

The trip from Jammu to Srinagar is a once in a lifetime experience. The spellbinding scenery, the snowy adventures, and the delicious local dishes from dhabbas (roadside restaurants) all come together to make it an amazing experience.

Summers and winters are both good times to visit Kashmir. The temperature is mild during summer. However, in winters the roads are tricky to navigate. Landslides are a daily phenomenon during the winter. Thus, you must be prepared for delays in reaching your destination.