New Brunswick is one of the thirteen Provinces of Canada on the Atlantic coast; and the only province in the country with both English and French as official languages.

While the province covers a land area the size of Ireland, most of them along the coasts and in the Saint John River valley. The inland consists of sparsely populated forest.

Fun Fact: The province’s name comes from the English and French translation for the city of Braunschweig in Lower Saxony, northern Germany, the ancestral home of the Hanoverian King George III of the United Kingdom. 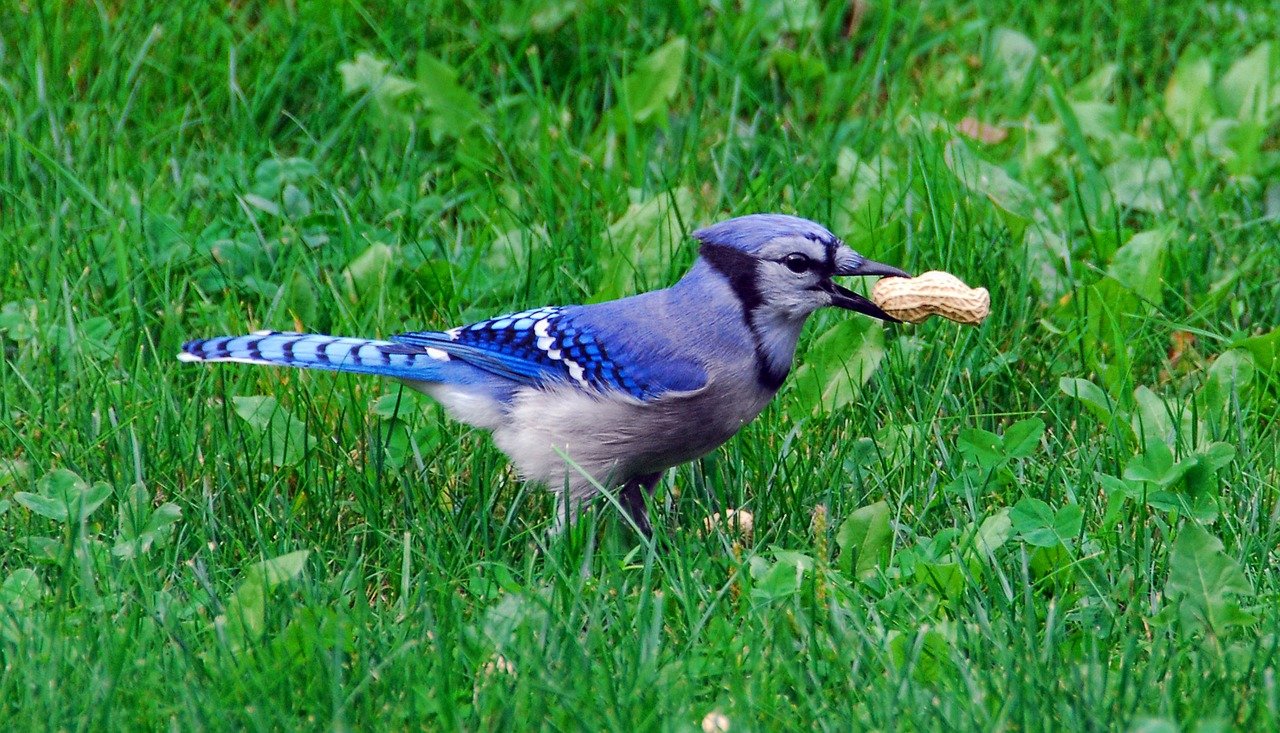 A Blue Jay in Summertime

The Mi’kmaq is the dominant First Nation (Indigenous people) in New Brunswick.

New Brunswick is part of historic Acadia, an early 17th-century French colony in North America. Governed by the British in the 19th century, Acadia was forcibly depopulated by the British and its inhabitants dispersed; most would eventually settle in Louisiana.

As such, there is a noticeable divide within New Brunswick. If one splits the province diagonally from Moncton in the southeast to Grand Falls in the northwest, the Acadian (northeast) and anglophone (Southwest) divide is almost exact. This divide does not result in a significant ill will; however, the divide definitely exists within older generations of the province.

Fun Fact: Southwestern New Brunswick is United Empire Loyalist country. Loyal British subjects who opposed the 1776 armed insurrection in the colonies to the south, which were to become the United States of America, settled in the southwest in 1784. Fredericton’s streets were laid out in the form of the Union Jack.

Things To Do In New Brunswick

Tourism is a good source of revenue for much of the province, and during busy periods of the summer, book ahead to ensure rooms are available. Due to the relatively limited range of options within the province when following the Trans-Canada Highway, a very busy weekend could result in the closest available rooms being hours away.

Outside of peak times, however, accommodations are quite plentiful.

Many of the star attractions close soon after Labor Day (the first Monday in September); travelers visiting in the fall will find their options limited, even though the weather remains amenable to travel well into October. 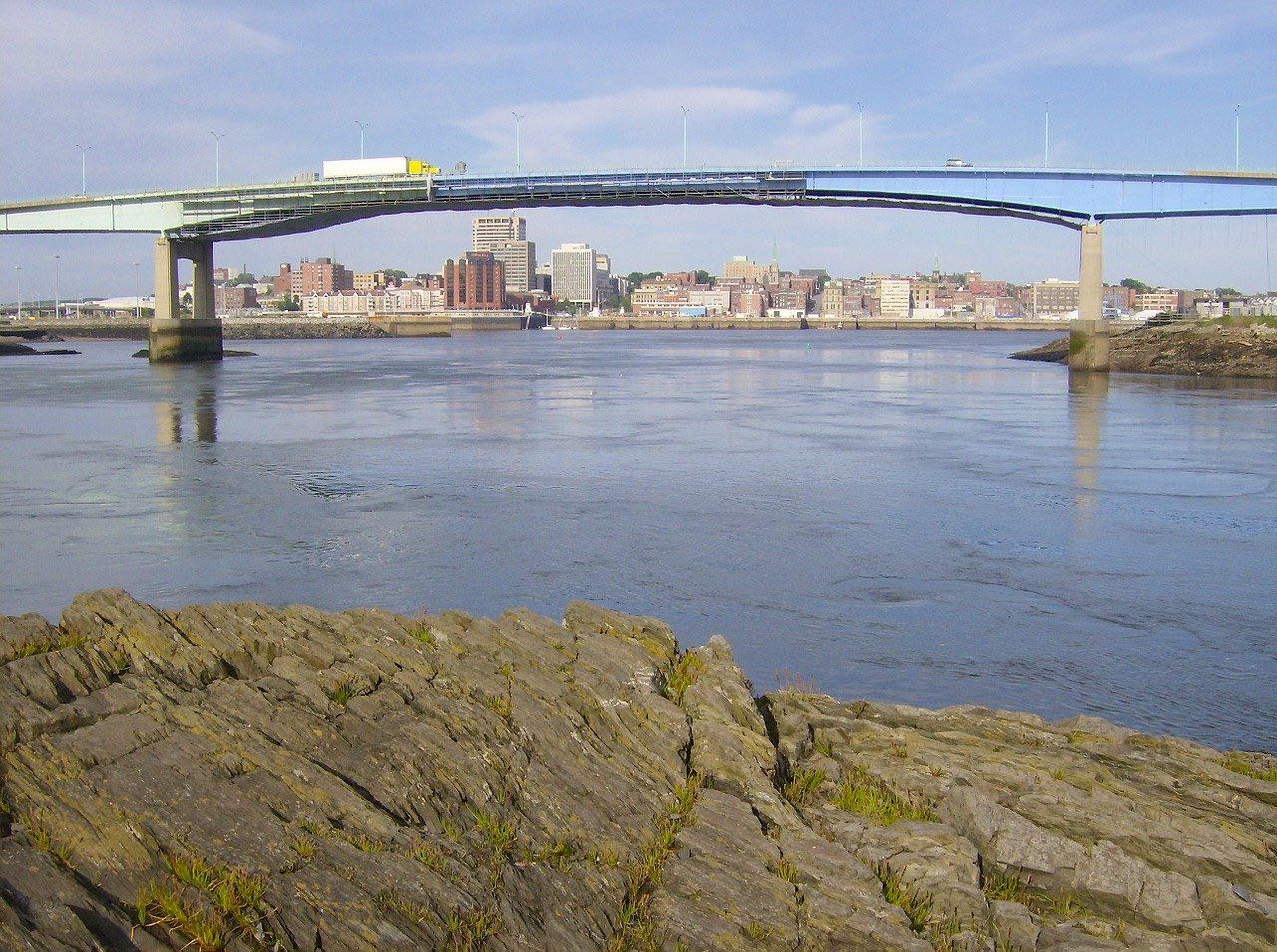 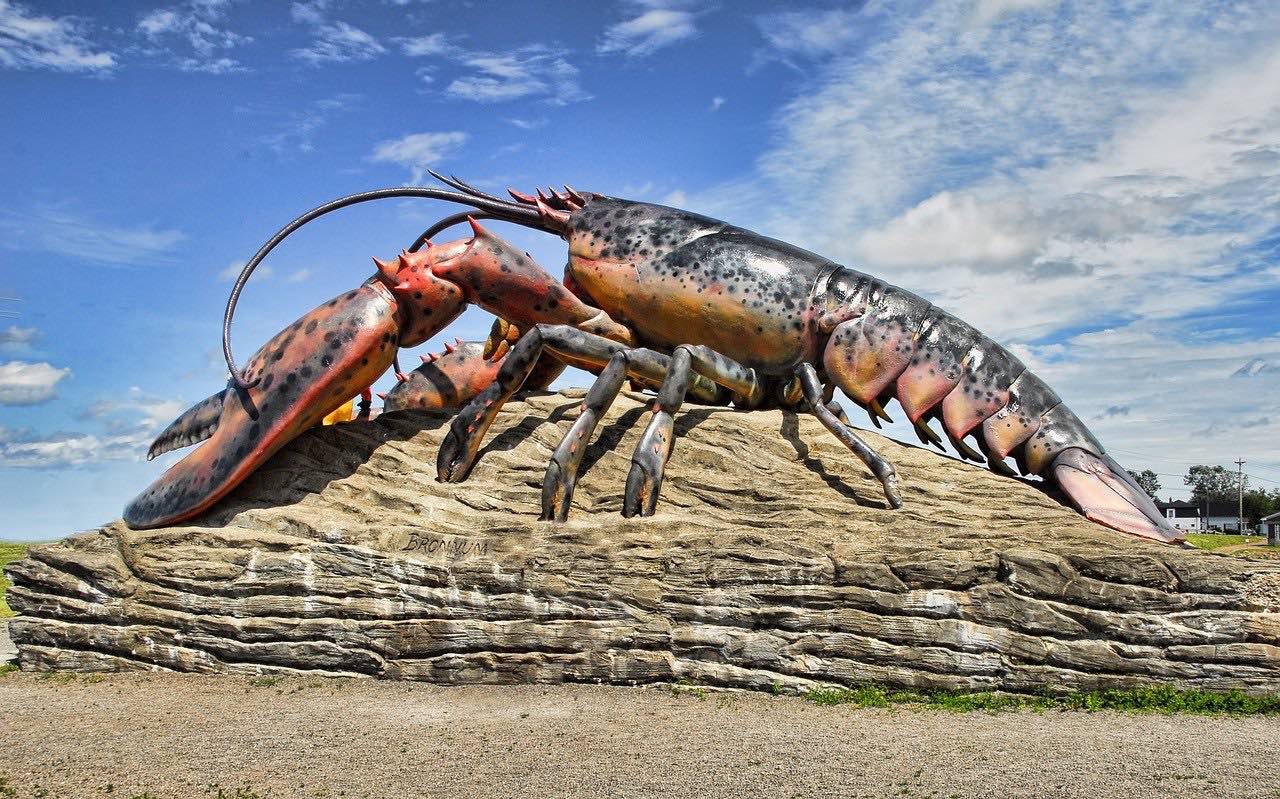 New Brunswick gets a lot of through-traffic, as it is often used as a gateway to Prince Edward Island, Nova Scotia, and Cape Breton, which are all reached via New Brunswick.

Parts of New Brunswick, however, such as the southern coast and the southeastern coast, offer lovely scenery, and some excellent beaches. 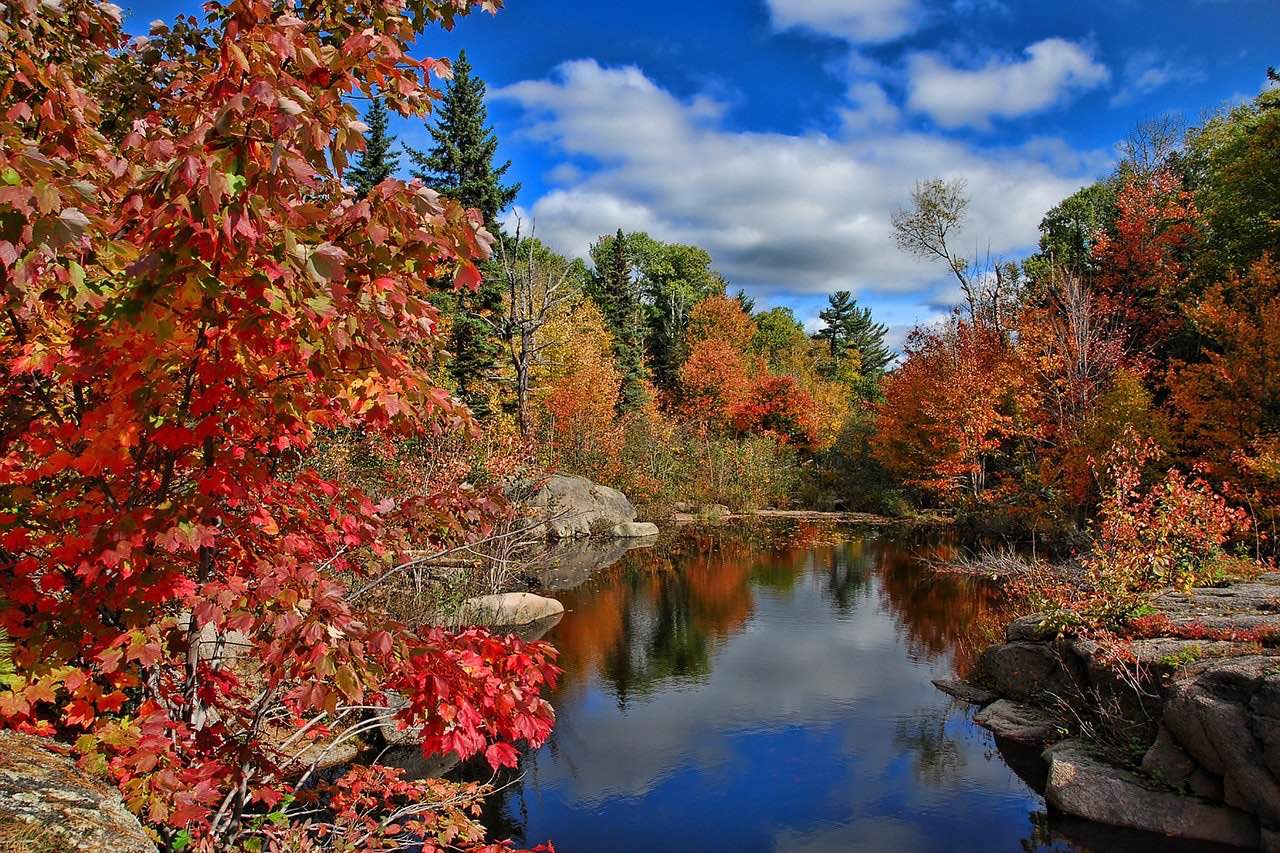 Fredericton, the province’s capital, is a small but graceful city that hosts the province’s Legislative Assembly, the Historic Garrison District, the Old Government House, and the surprisingly good Beaverbrook Gallery.

The Kings Landing Historical Settlement offers an excellent view of daily life in the Maritimes in the 19th century. The Village Historique Acadien in Bertrand (near Caraquet) is based on French-language Acadian history instead of British Loyalist heritage.

Le Pays de la Saguine is another reproduction of an Acadian village on the east coast of New Brunswick. 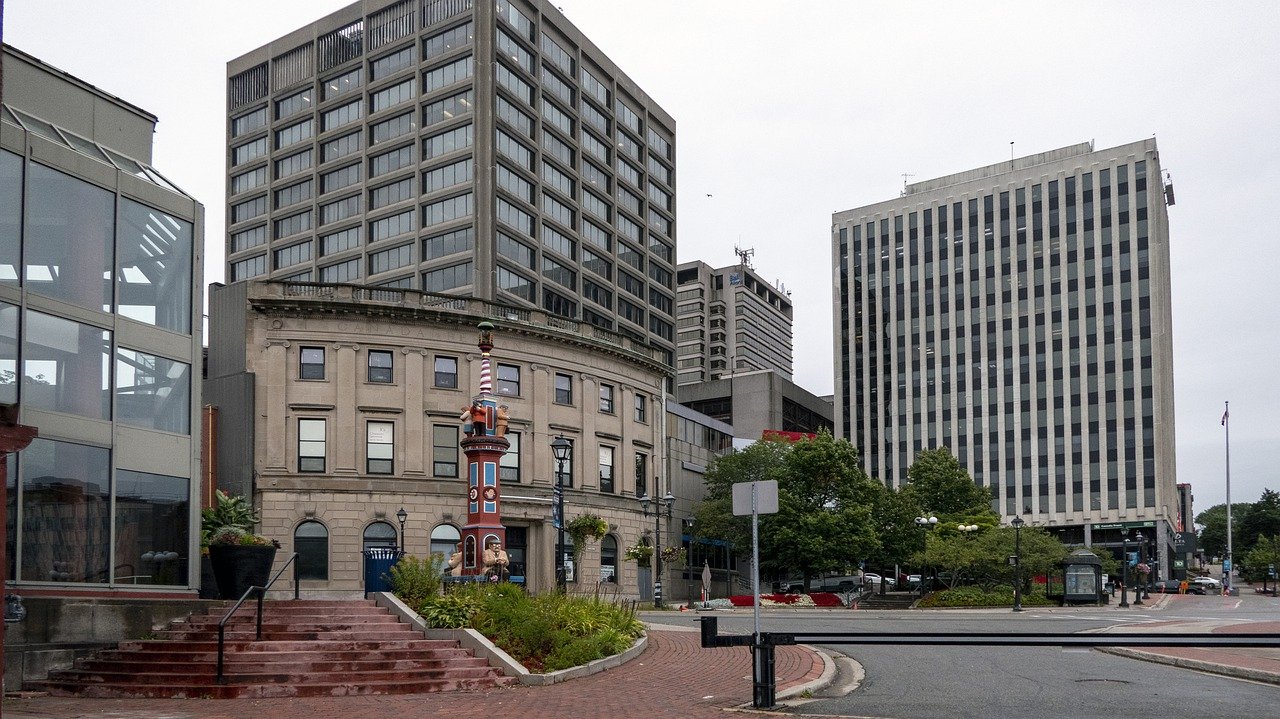 Saint John is the second-largest city in the Canadian province of New Brunswick. It is in the south of the province on the Bay of Fundy. 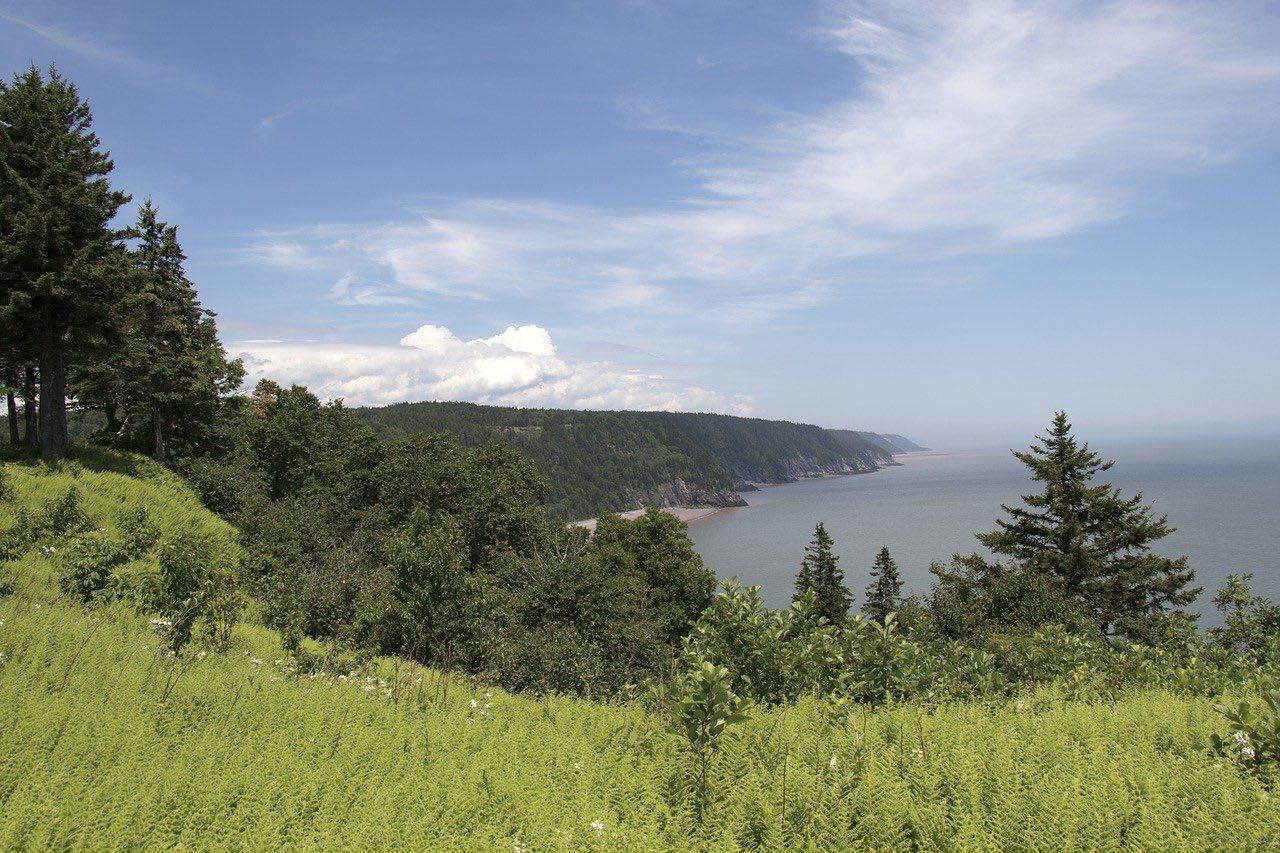 New Brunswick has some unusual attractions to offer, such as the Old Sow. With a diameter of 75 m (250 feet), off the south-western shore of Deer Island, Old Sow is the largest tidal whirlpool in the western hemisphere.

The Grand Falls and Gorge show the power of the Saint John River.

New Brunswick has several beautiful parks. Kouchibouguac National Park, on the shores of the Northumberland Strait, is home to much wildlife and glorious beaches.

Mount Carleton Provincial Park includes the highest mountain in the Maritimes and several other peaks with trails that are perfect for wilderness lovers.

Near the village of Alma, Fundy National Park is 207 km² of coast and inland forest. The park has several campgrounds which include wilderness and more comfortable ones. There are more than 20 waterfalls in the park.

The Reversing Falls is a one-of-a-kind adventure where the flow of the Saint John River reverses when the Bay of Fundy is at high tide.

Hopewell Rocks are a group of Flowerpot rocks east of Moncton.

A popular summer colony for wealthy Canadians and Americans, including Franklin D. Roosevelt.

A beautiful island made up of several small fishing communities.

Camping is available Roosevelt Campobello International Park was U.S president Franklin D. Roosevelt’s summer retreat from 1921 to 1936 on the southern portion of Campobello island was born.

The World Acadian Congress is held every 5 years (the next is planned for 2024) to strengthen the ties that unite Acadian communities while demonstrating the modernity and reality of Acadian identity. Congress is also an opportunity to welcome all those who are interested in and who love Acadia.

Family celebrations alone will attract tens of thousands of people throughout the event which is expected to receive around 100,000 participants. There will be shows, activities for young people, conferences, diverse cultural and artistic activities.

The World Pond Hockey Championships held annually in the village Plaster Rock are the pre-eminent pond hockey tournament in the world and draw teams and visitors from several countries.

A wooden covered bridge in Florenceville

More adventurous travelers can find more to see by following highway 11 up the east coast of the province, and then cutting across the province via the remote road connecting Miramichi to Plaster Rock. This road is used largely by logging trucks, and there is only one gas station, which is approximately halfway along the road.

Quebec City can be reached in a day’s drive from most points in Western New Brunswick; Boston is 8-9 hours by car, and New York City is 12-13 hours away.

Maine borders on New Brunswick’s east, and is within three hours drive from almost all parts of New Brunswick. While the major road connecting them is the Woodstock-to-Holton route 95, much more attractive coastal scenery can be found driving along the south coast to the St. Stephen/Calais border.

Prince Edward Island used to be a ferry ride away from New Brunswick, but the ferry connection with New Brunswick was closed in 1997, with the creation of the Confederation Bridge.

To protect transport trucks from the high winds of the Northumberland Strait, high concrete walls are in place which diminish the potentially excellent views the bridge could offer.

Nova Scotia is readily accessible from much of New Brunswick.

Much of New Brunswick’s climate is moderated by the extreme proximity of the ocean, resulting in mild summers, and winters which are mild relative to the temperatures seen in Ontario and the prairie provinces.

Snowfall is common during the winter months, however snow does not typically accumulate in large amounts until late December.

New Brunswick is the only province in Canada that is officially bilingual (English and French). Francophones speak a dialect known as Acadian French. Acadian French is distinct from Quebec French, since Acadia’s history is separate from that of Quebec.

Acadian French speakers are instantly recognizable by their charming and strongly trilled r. It is similar to the dialect spoken by Francophones in Acadiana, Louisiana.

Near Moncton and in other urban areas, you might hear a distinct English-French creole language known as chiaque (its name comes from the city of Shediac, right in the middle of the region where it’s spoken).

It’s frowned upon as “bad French” by Francophones and “bad English” by Anglophones, but it’s popular among young people. Some effort is being made to rehabilitate chiaque, with a nascent literature and support organizations.

Travel by car is the easiest way to see New Brunswick. The Trans-Canada Highway and four-lane highways cross much of the southern stretch of the province. Drivers accustomed to any major metropolitan traffic will find most intercity roads to be very lightly used, even in summer months.

The roads of New Brunswick are patrolled by the Royal Canadian Mounted Police (RCMP), and speed traps are sometimes in place. Speed limits have no official tolerance in them; however typically travel under 10 km/h above the speed limit will not attract attention.

RCMP officers are not always known for their sense of humour, however, where speeding (or anything else) is concerned, and tickets may be issued for any speed above the posted limits. If you are pulled over by the RCMP, typical North American rules for police interaction apply; keep your hands on the steering wheel while being approached by the police, and be respectful at all times.

As with much of Canada, winter roads are more dangerous, and travellers are advised to treat the roads with caution. Winter tires are recommended for long distance travel; however snow chains are only necessary on very rural roads and private roads.

When travelling during the winter, drivers should carry an emergency kit with a source of heat, blankets, and an amount of food to ensure that being caught in a storm is only an inconvenience, rather than a life-threatening issue.

In some winter storm conditions, roads such as the Trans-Canada link between New Brunswick and Nova Scotia can be closed due to whiteout conditions.

Maritime Bus serves many points on former Acadian Lines Bus Service routes; the primary hub is Moncton. Stops on some lines are frequent and often include very small villages.

Via Rail provides a somewhat limited service along the Eastern coast of New Brunswick, entering the province at Aulac, and then passing through Moncton, up to Bathurst, and then from Campbellton across the border into Quebec, eventually terminating in Montreal.

This service passes through the province once per day in each direction, so you should not miss your train unless you’re willing to extend your holiday.

New Brunswick offers a wide variety of restaurants ranging from seafood to Oriental to fast food to Acadian. One of the province’s specialties is fiddleheads (fern fronds, served as a vegetable), which are found in the Saint John River Valley area.

Poutine rapée, a boiled potato dumpling with a pork filling, is a dish served along the Acadian coast area.

Founded in 1867, Moosehead Beer is Canada’s oldest independent brewery and the local favorite. Brewed in Saint John, it is “exported” across the country.

The craft beer revolution has also come to New Brunswick: there are many microbreweries throughout the province, and especially in Moncton, Fredericton, and St. John.

There is also a winery on Magnetic Hill in Moncton that makes drinkable grape and rhubarb wines.