Nova Scotia is one of the least populated provinces of Canada. For visitors, Nova Scotia offers beaches, history, rugged wilderness parks, a mix of Celtic, Acadian French, and Indigenous cultures.

As a peninsula exposed to the Atlantic Ocean, Nova Scotia has a more maritime climate than mainland Canada, with mild winters and cool summers.

For a population of just under a million, Nova Scotia is remarkably diverse: Mi’kmaq, Scots descendants, black Nova Scotians, French Acadians, Annapolis Valley farmers, Cape Bretoners, and Haligonians all form distinct groups with their own unique quirks, culture, and language.

Fun Fact: The novel “Rockbound” is written entirely in the South Shore dialect of the fishermen of that region, a fusion of Shakespearean English, German, and unique local idioms.

Champlain named Nova Scotia “Acadie” and claimed it for France in 1604. French immigrants settled the area and became prosperous farmers and fishermen.

However, they were expelled by the British in the mid 18th century, with their lands, especially on the South Shore, repopulated with “foreign Protestants”, meaning mostly Dutch and Germans.

Fun Facts: The Louisiana “Cajun” is a slang adaptation of “Acadien” in the French. Longfellow’s poem “Evangeline” celebrates the victims of the expulsion, as does Zachary Richard’s drum and voice song “Reveille”. Because of the expulsion, French is far more commonly heard in New Brunswick.

Things To Do In Nova Scotia

Halifax is the capital of the province and economic and cultural hub of Eastern Canada. There’s history to explore, culture, beaches, and friendly laid-back East Coast hospitality.

Halifax is one of the oldest cities in North America and was a critical sea link during World Wars I and II. The infamous “Halifax explosion” caused by collision of two ships in Halifax Harbour in 1917 was the worst man-made explosion on Earth until Hiroshima in 1945.

During the Tall Ships Festival, Halifax hosts up to 30 historic and unique (and usually massive) maritime sailing vessels from around the world.

Halifax today is an education and high technology center, with over a dozen post-secondary institutions including Dalhousie University and substantial operations by major high-technology firms. Academics have an unusual influence in Nova Scotia, perhaps because of their concentration in the capital.

Citadel Hill in downtown Halifax is a fortification dating from the first half of the 19th century; it is called the ‘Warden of the North’.

Downtown Halifax is a compact historic city with some interesting sites.

The largest protected wilderness area in Atlantic Canada. The Tobeatic is a large natural area that spans five counties and more than 104,000 hectares of central southwestern Nova Scotia.

Nine major rivers flow from the Tobeatic and over 120 lakes are found within the wilderness area.

The wilderness area is available to the public for canoeing, birding, and other outdoor pursuits for the enjoyment of nature.

A unique destination off the end of ancient basalt formation (Digby Neck) jutting out into the world-famous Bay of Fundy.

This area is rich in marine life (Whale watching, Atlantic flyway for migrating birds, and has a resident seal colony).

The area has been long visited by naturalists who regularly spot rare and endangered plants. Rock hounds will be impressed with the many types of rock formations and can find quartz, agate jasper, amethyst, and even zeolite.

An area truly unspoiled, off the beaten track, and deeply steeped in maritime tradition. (Home of the famous Joshua Slocum, the first person to sail solo around the world in 1895 on the Spay a 37’ sloop.)

Brier Island offers many trails to explore both easy and challenging for hikers on short or extended visits. The island is accessible by two short ferry rides from the end of Digby Neck.

The Minas Basin (also referred to as the Fundy Shore) is a region in the northwest of Nova Scotia.

It is known for having some of the highest tides in the world and its granite cliffs and outcrops attract rockhounds and fossil hunters.

The most notable of these is the Joggins Fossil Centre, near Amherst, which is a UNESCO World Heritage Site. 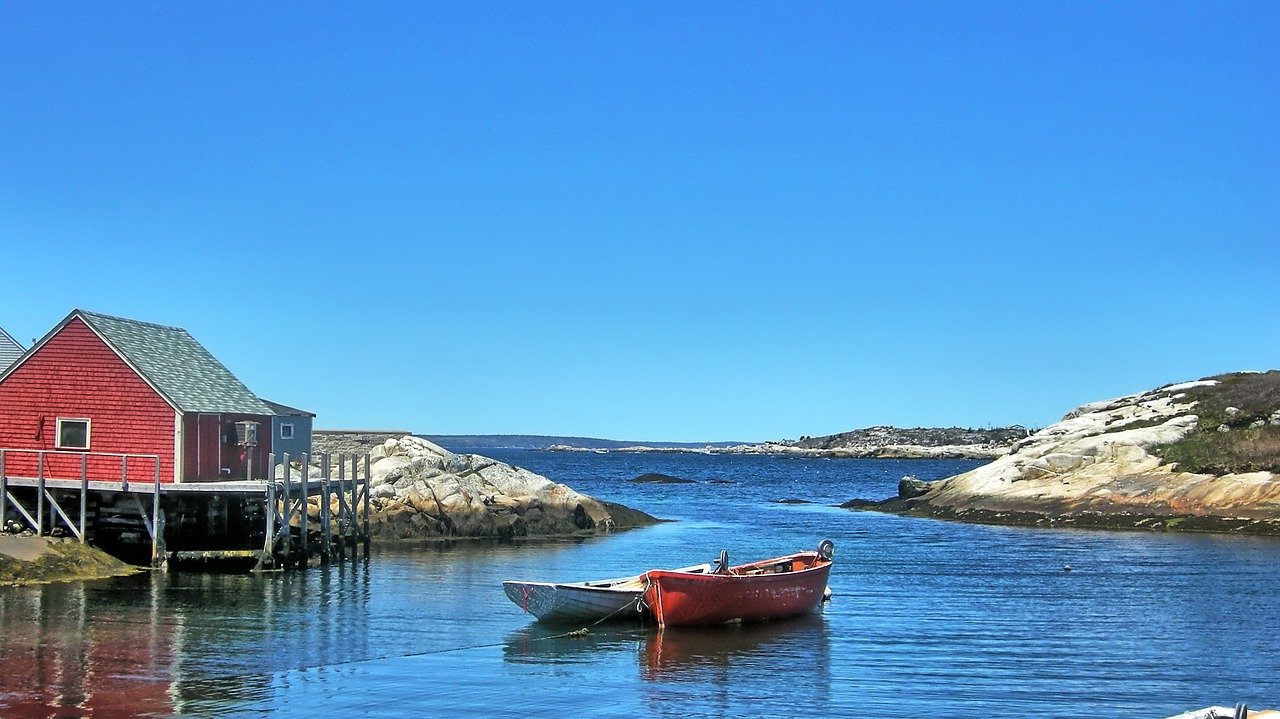 Peggy’s Cove is a hamlet and popular tourist spot in Nova Scotia. It is both bleak and picturesque with its historic and still-used lighthouse standing watch over the village and the granite rocks and cliffs.

Peggy’s Cove is a tiny fishing village (population 35) which attracts somewhere between half a million and a million tourists a year, all trying to snap a photo of its famous lighthouse.

Some claim that a fisherman named this tiny spot for his wife, who was fond of this location; another possibility is that the village is named for its location on St. Margaret’s Bay.

Located ~35 km SW of Halifax on road 333 is one of Canada’s more renowned landscape scenes. It is a lighthouse on rounded rocks.

There is a restaurant and tourist information, but otherwise, it is just big rocks with a dozen small houses and 60 people living there.

The Cape Breton Highlands provide a profoundly beautiful drive along the Cabot Trail any time of the year but it is most pristine in Autumn, once the leaves change.

For fossil collectors, there are many beaches along the shores of Cape Breton Island that have exposed coal seams and rocks containing fossilized ferns and other flora can be found in these areas.

Bras d’Or Lake (pronounced ‘bre-dor’) is an inland sea within the island of Cape Breton.

Whale-watching tours are popular in towns along the Atlantic coast.

Tidal Bore Rafting is a unique way to experience the highest tides in the world near Truro.

Victoria Park is a 400-hectare park in Truro with wooded trails, a swimming pool, picnic areas, waterfalls, a ball field, a playground, and an outdoor stage.

Hike a portion of Trans Canada Trail in Nova Scotia.

Unless you are a winter surfer or like to snowshoe, then it is probably best to visit Nova Scotia sometime between June and October when the weather is warm, the skies are blue and the water may be less frigid.

The main byways are along the coast, and a lot of small shops and restaurants are open around the coast during the summer months.

Note: Watch out for mosquitoes and horseflies in the summer, however, especially after a storm.

Robert L. Stanfield International Airport (YHZ IATA), at Halifax, is the main international airport in the province. Flights can also be made to Sydney, via JA Douglas McCurdy Sydney Airport (YQY IATA), from Halifax, or periodically from Boston, Toronto, or other Maritime cities.

Nova Scotia is part of the Trans-Canada Highway linking it with New Brunswick at Amherst. It is roughly a three hour drive from Moncton to Halifax and 3.5 hours from Charlottetown to Halifax.

Two bus companies — Greyhound Canada and Maritime Bus — provide inter-provincial bus service to Nova Scotia. They can be useful if your destination is along the Trans-Canada Highway or the Truro-Halifax corridor, but service does not extend far elsewhere. For more structured bus trips or transport, there is also Out Here Travel, a backpacker-focused hybrid bus transport and tour company which picks up passengers in the Toronto and other nearby locations – heading east primarily. Park Bis connects Halifax to Kejimikujik National Park.

Ferry service is available from Prince Edward Island to Pictou, Digby to Saint John, New Brunswick, and Newfoundland to North Sydney. A service to the US is available between Bar Harbor, Maine and Yarmouth.

Via Rail provides service connecting Halifax to Montreal three times a week. The trip takes 22 hours and also stops at Truro and Amherst.

Nova Scotia has a comprehensive road network, with three tiers of highways:

Provincial (100-series) highways Nova Scotia 102.svg — The fastest and most direct routes as they tend to by-pass the towns and villages, but not as scenic as the other highways. Some of them, such as the 102 and much of the 104, are expressway/motorway standard.

Trunk highways Nova Scotia 2.svg — Two lane highways with the occasional passing lane. These routes connect the towns and villages so are slower than the 100-series highways but more scenic.

Collector highways Nova Scotia Route 333.svg — Generally narrow, windy and variable quality (may be paved or gravel), but are best for taking you off the beaten path.

The Trans-Canada Highway (Highway 104 on mainland Nova Scotia and Highway 105 on Cape Breton) and Highway 102 form the backbone of the road network connecting most of the province’s main centers with New Brunswick and the ferries to Newfoundland. Highways 101 and 103 connect Yarmouth to Halifax via the Annapolis Valley (Hwy 101) and the South Shore (Hwy 103).

The provincial tourism department has created a number of scenic routes that cover specific geographic regions of the province, such as the Lighthouse Route along the South Shore or the Glooscap Trail that covers the Minas Basin region. The routes are generally well sign-posted and good to explore if you want to focus on a specific region in-depth.

If driving, be aware of road conditions in the winter, especially away from major areas.

Having so much of the province in a natural state, there are many opportunities to pick wild fruit and berries. There are wild strawberries in the fields and along roads, wild blueberries, raspberries, and cranberries (in coastal areas).

Blueberry Grunt is a blueberry baked with a sweet dumpling topping.

Dulse: most of this seaweed is harvested at very low tides in parts of Nova Scotia. Locally it is dried and used as a snack.

Garlic fingers: similar to a pizza in shape and size and made with the same type of dough. Instead of the traditional tomato sauce and toppings, garlic fingers consist of pizza dough topped with garlic butter, parsley, and cheese, cooked until the cheese is melted. Bacon bits are sometimes added. They are typically eaten as a side dish with pizza and often dipped in donair or marinara sauce. They are presented in thin strips (or “fingers”) as opposed to triangular slices.

Halifax donair: a pile of roasted, spiced beef (known as donair meat) with diced tomatoes and white onions covered in condensed milk sauce and wrapped in a pita. It is unique to the province and is available at almost every corner diner and pizzeria.

Lobster rolls are common throughout the province.

Digby Scallops: local seafood which is highly recommended by literature and locals.

Try the local beers. Nova Scotia is best known as the home of “Alexander Keith’s India Pale Ale”, known locally as “Keith’s” But there are many lesser known brews available as well. Not to be missed are the offerings of Propeller Brewery and Garrison Brewing as well as several microbreweries and brewpubs (such as the Rogue’s Roost).

In case of emergency, dial 911. Seat belts are mandatory for drivers and all passengers. Helmets are required by law for all motorcycle and bicycle riders.

Radar detectors are illegal and will be confiscated if found by the RCMP. If you are hiking in grassy areas you should be aware that Lyme Disease is present in Nova Scotia and carried by ticks.

Tie your pant legs or pull your socks over your pant legs and watch for ticks. In wilderness areas: there are no poisonous snakes in the province but coyotes are becoming bolder and a few people have been attacked.