Sikkim is a small state in East India in the Himalayan foothills bordering Tibet (in the north), Nepal (to the west), and Bhutan (to the east). West Bengal borders in the south.

The name has been coined from the words “Su him”, which mean “beautiful home”, reflecting the beauty of its snow-covered mountains and lush green valleys.

Nearly 40% of Sikkim’s land area is forested. It is renowned for wide rhododendron woods with 450 different kinds of orchids. The orchids blossom from March to May.

Things To Do In Sikkim

This beautiful little state has everything for you to do from listening to live music and chilling in one of the cafes in its capital city of Gangtok to trekking up mountains and adventure sports. You can immerse yourself in a spiritual clean in one of the hot water springs or go to a monastery to find you peace.

You can walk amidst flowery spring, snowy winter or dance in the rainy monsoon. Sikkim has it all with the peace you don’t find in most other states of the country. There are many adventure activities possible to do in Sikkim. 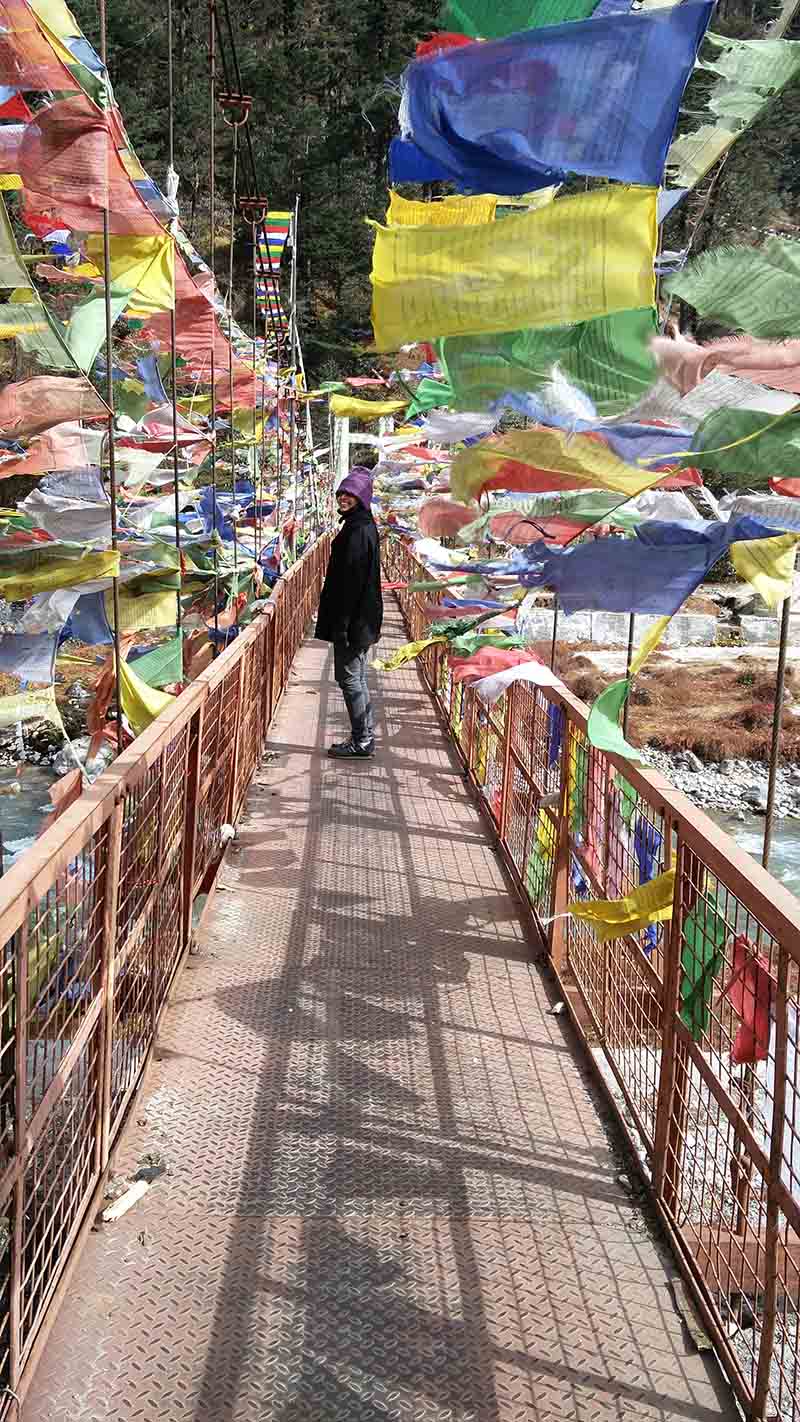 Photo: A suspension bridge in North Sikkim / The Art of Travel Partners

The capital city is a must visit when in Sikkim. From cafes serving hot coffee to live music and beer, you have those at MG Marg, from hot steaming momos to watching a football match you can get those at Paljor Stadium from monks at monasteries to sisters in churches, you have it all.

The city can cater to the hip, the oldies, the youngsters, the peace-loving yoga do-ers. Whichever category you fall into, you will find something to do here. 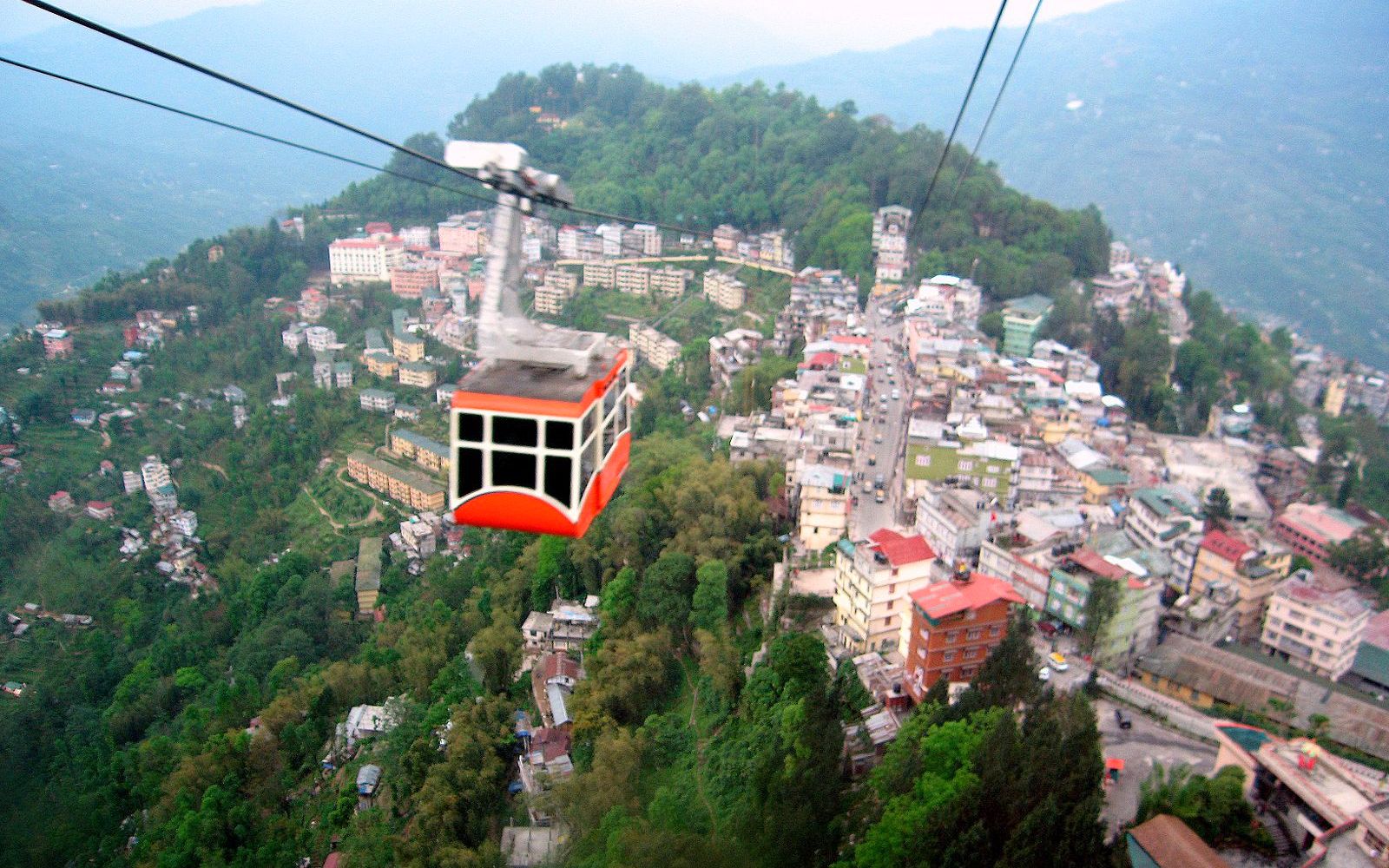 Photo: Cable car at Gangtok / The Art of Travel Partners

A visit to Yumthang Valleys it truly a colorful affair! Located at an elevation of 3,500m, this scenic valley is the home to several exotic, rare and wildflowers.

Best time would be post-March and during April where you get the flowers blooming and the picturesque snowcapped Himalayan background. 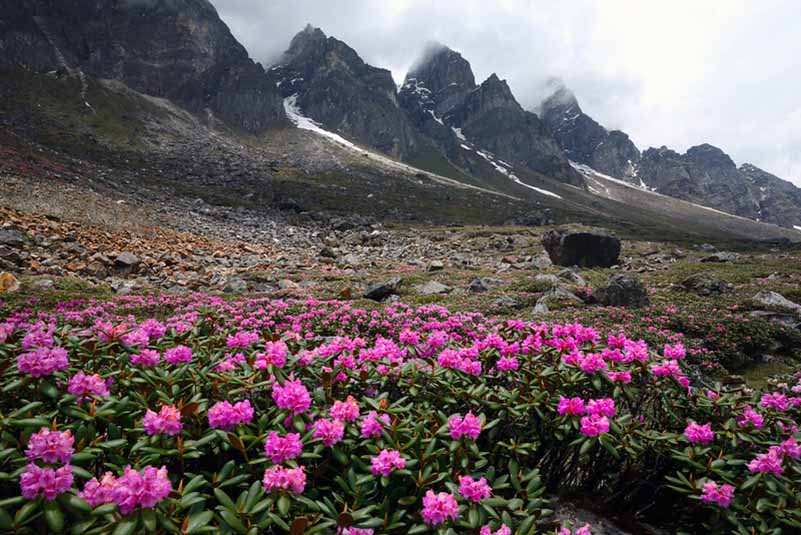 Photo: Colourful flowers with a Himalayan backdrop at Yumthang / CC0

It is a beautiful drive to get here form Gangtok, especially in the monsoons.

This institute is the most prominent place of research on Tibetan language and culture. It also has a library and a museum where some of the most historically valuable documents are preserved. Apart from that, the Namgyal Institute of Tibetology is also known for its traditional architecture.

Located 24 km from Gangtok in East Sikkim the main seat of the Karma Kagyu school of Tibetan Buddhism in Sikkim. Originally built by the 9th Karmapa Wangchuk Dorje in 1740, but fell into disrepair. The current structure dates from 1959. 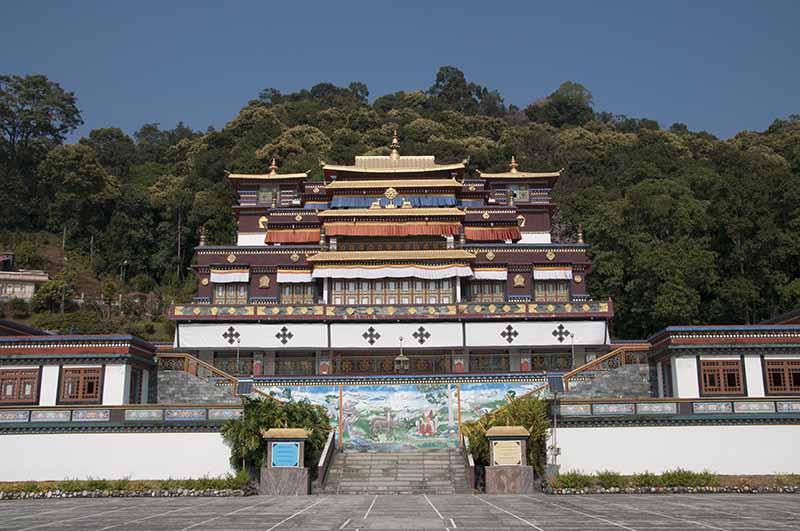 Photo: Rumtek Monastery during monsoon / The Art of Travel Partners

If you love forgotten, naively painted temples, little Resum Gompa is likely to be one of the highlights of your monastic wanderings in Sikkim.

Adding to the fun is the lack of any access road, forcing you to walk around 20 minutes through the forest, encountering occasional collapsing stupas and mani walls with sacred inscriptions. 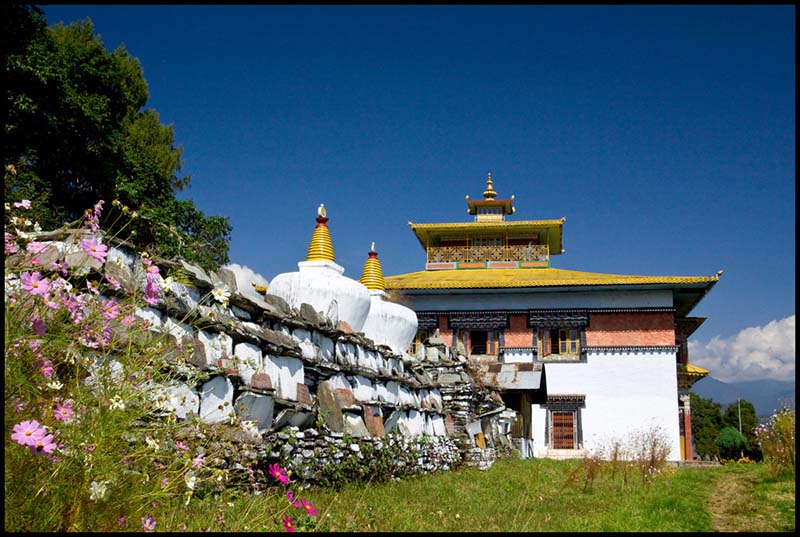 Architecture and religious importance are two of the best parts of the Phodong Monastery. This religious destination is one of the top most important monasteries in the entire Sikkim.

The Phodong Monastery was built almost 300 years ago, but over time it has been rebuilt again and again to survive the taste of time.

The legend says the Do-Drul Chorten was built by a lama in 1946 to drive away the evil spirits that roamed in the area before. It’s located on a mound and the climb is rather steep, but you should consider taking that challenge because the Do-Drul Chorten is surely an important place to be in Sikkim.

The Nathu La pass lies on the Indo-Chinese border and is only open for Indian tourists. People who wish to visit Nathu la should get special permission one day in advance. Closed on Monday & Tuesday. It closes in the winter and opens in May. 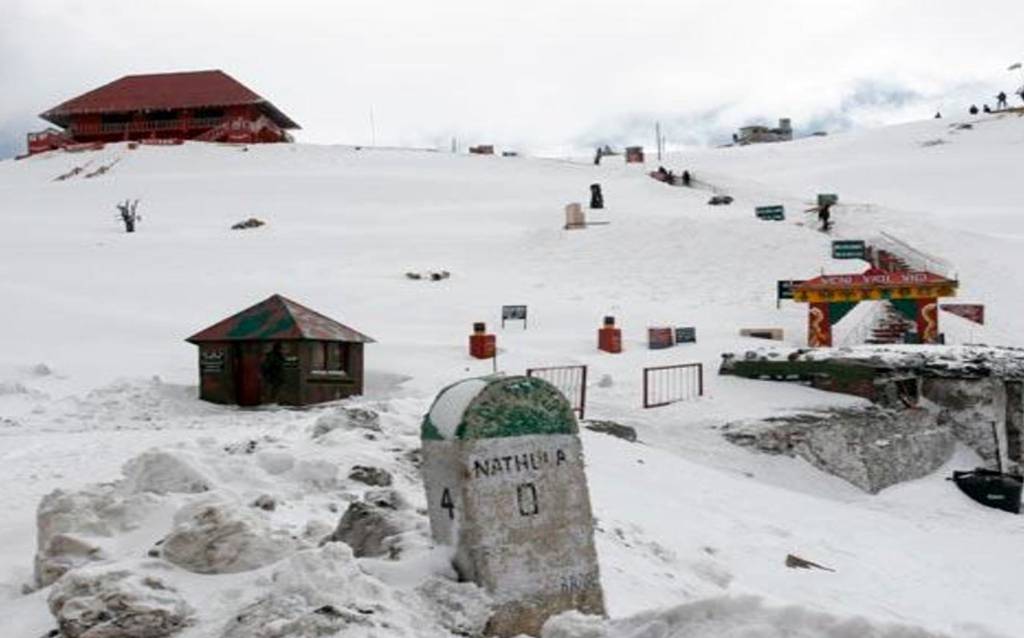 The Goecha La Trek is one of those things to do in Sikkim that will surely stay in your memory forever. The Goecha La Trek takes 10 days to be completed and it’s only moderately challenging. October to November is the best time.

Photo: View of the Himalayas / The Art of Travel Partners

The lake is also known as the Changu Lake and it’s made of glacier water. You can hire a car from Gangtok to reach the Tsomgo Lake, located at 12310 feet.

The lake is 35 km from the city and an early start will make your visit even more spectacular. The lake is surrounded by mountains and during the winter season, the surrounding areas stay covered in snow. The beauty of the entire scene is breathtaking.

For day trip visitors a night stay at Lachen is advised to allow altitude acclimatization. It is recommended that visitors do not run or speak loudly, rather sit by the lake enjoying its beauty and the surrounding mountains.

Tourists are generally asked to leave the place by 13:00-14:00, after which the wind speeds pick up and are enough to carry small stones. Foreigners aren’t allowed here due to security concerns. 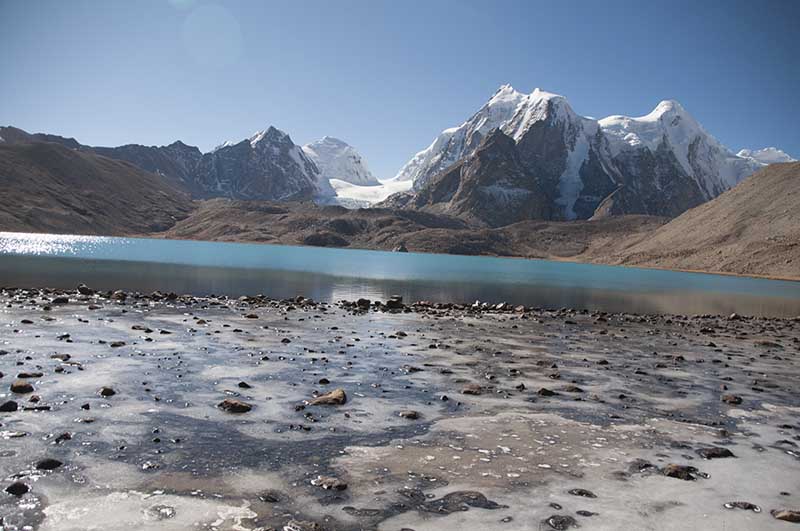 Photo: Gurudongmar Lake during the start of winter / The Art of Travel Partners

Eight kilometers from Nathu la pass is the original Harbhajan Singh Baba Temple from which the Indo-Bhutan border is approximately 6 km and the India-China border is around 5 km. A must visit place for all those who like to explore places!

Photo: The way to Baba Mandir during winters / CC0

Chungthang is in the northern part of Sikkim. It is located at the confluence of Lachen and Lachung Chu and is the starting point of the river Teesta. It is believed that Chungthang is blessed by a guru Rimpoche.

Kabi Lungtsok is a historic place, located on North Sikkim Highway, 17 km away from Gangtok. This is the same place where the historic treaty between Lepcha Chief Te-Kung-Tek and the Bhutia Chief Khey-Bum-Sar was signed ritually.

From Lhamo Lake, where it’s created, River Teesta flows through the entire state and it has become the lifeline of Sikkim. With exciting rapids spread all over the river’s course, there is plenty of opportunity for rafting in Teesta.

Kanchenjunga (8,586 m) is the third-highest mountain on earth. The mountain is venerated as the seat of the Gods.

There are many glaciers located in the Khangchendzonga National Park. Animals such as musk deer and snow leopard make their homes here.

Photo: The mighty Kanchenjunga range as seen from the national park / CC0

With a view to die for and housing a huge variety of wildlife, the Singalila National Park is a beautiful place to visit. The highest point of the park is located at 12000 feet and you can trek up to there to enjoy it even more. 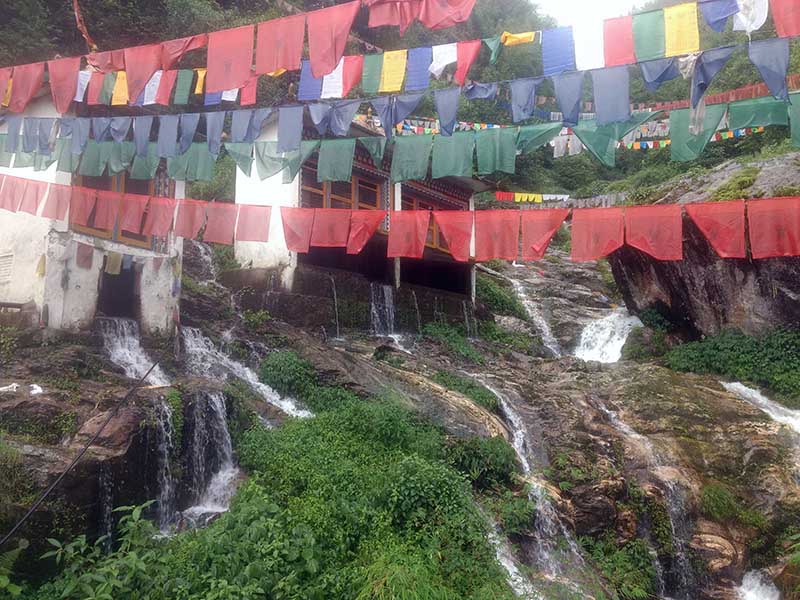 Photo: A monastery with its prayer flags near Gangtok / The Art of Travel Partners 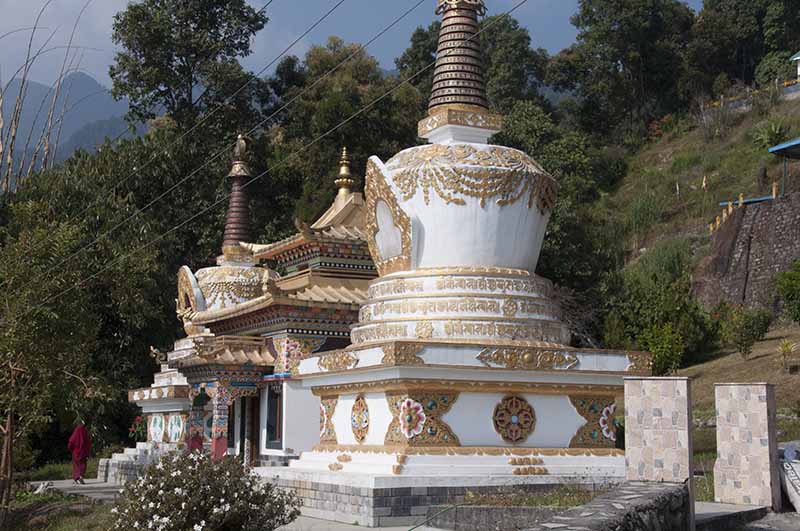 Photo: Chortens outside a monastery / The Art of Travel Partners

Trekking in the high mountains areas is permitted in groups only. The following agencies organize treks:

The agencies also apply for the necessary permits. The prices for treks in the high mountains areas range from US$40 to US$150 per person per day. 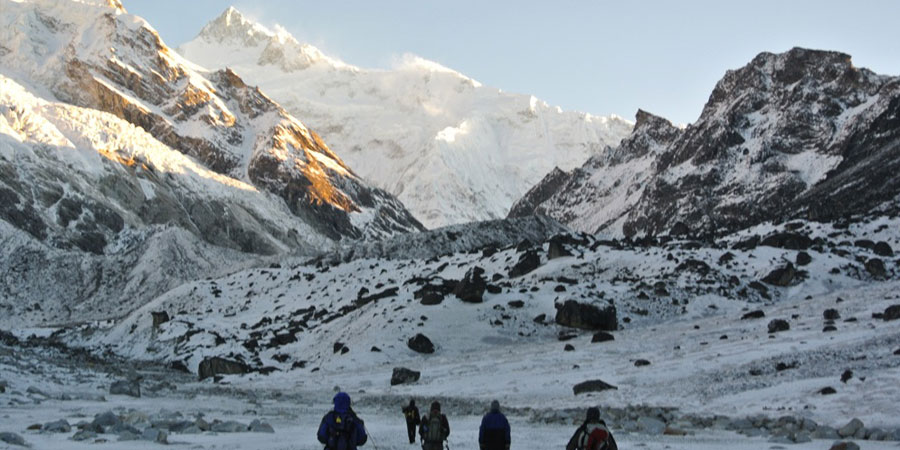 Photo: During the Sandakphu trek/ CC0

Some of the most interesting treks are:

Photo: View during a trek in Sikkim / CC0

The official language and lingua franca of Sikkim is Nepali. Many other languages such as Dzongkha and Tibetan are also spoken by smaller numbers.

However, Hindi is also widely spoken as a second language, and all educated people are able to speak English.

For a long time, Sikkim was a Buddhist kingdom, isolated in the Himalayas, populated by Lepchas and Bhutia, two tribes of Tibetan origin, and governed by the Namgyal Dynasty from Tibet.

Sikkim was declared a British protectorate in 1861. The British government encouraged the immigration of Nepalese workers, and today about 75% of the population is Nepalese.

Sikkim has a lot of Buddhist influence and they celebrate many of their festivals and events with a lot of enthusiasm. You can enjoy their local dance with music during their festivals like Pang Lhabsol, DrupkaTeshi, Saga Dawa,  Kagyat Dance, Losoong,  Dasain, Losar.

Most travel in Sikkim is done by bus or jeep on road. Trekking is also a popular option. You can now hire local taxis to go from one point to the other. You can also hire share taxis to make it cheaper for you. From the airport to Gangtok try Wizzride

Delicious momos stuffed with meat (also known as ‘Dumpling’). For vegetarians, veg momos are also available along with Thukpas (noodle soup). Phagshapa is a strip of pork fat stewed with radishes and dried chilies.

Photo: Thumba or Tongba with its special straw / CC0

The way to enter Sikkim from rest of India by its first airport which is situated at Pakyong by taking flight from West Bengal airport or by road using a bus or jeep, or by helicopter from West Bengal.

If not Bagdogra airport in West Bengal is the major airport from where you can take a cab to the city of Gangtok which will take around 4 hours. Buses also ply on this route.

As of May 2018, it is still necessary to obtain a Restricted Area Permit (also known as Inner Line Permit – ILP) for foreigners to travel in Sikkim.

The permit is a piece of paper containing your passport data and dates you are permitted to travel (typically, 15 days). When entering and exiting Sikkim, your passport will be stamped much in the same manner as when crossing national borders.

The permit can be obtained when crossing the Sikkim state border by road in Rangpo or Meili.

It is also available from Sikkim travel desk in Darjeeling located inside the Old Bellevue Hotel (opposite to Glenary’s restaurant in Chowrasta district), and from Sikkim Tourism Center in Siliguri located at the S.N.T. bus stand, in the vicinity of Siliguri Junction railway station.

The website of Ministry of Home Affairs states that permits can also be obtained at large international airports (Delhi, Mumbai, Chennai, Kolkata), but locating the relevant facilities has proven difficult for some travelers, due to the incompetence of personnel.

The permit is valid for 2 weeks from the border entry to Sikkim.

For the border regions, e.g. Tsomogo Lake in East Sikkim, most parts of North Sikkim and treks into high mountain regions, including Dzongri and Singalila Ridge a Protected Area Permit (PAP) is required.

Foreigners must visit these regions in groups of at least 2 persons accompanied by a representative of an officially acknowledged tour operator. The agency will also apply for the Protected Area Permits.

How Safe Is Sikkim

Sikkim is one of the safest states in India and can be traveled to safely without any concerns. Even during the night, it is safe for people to walk back to their hotels. Cab drivers are friendly and everybody is willing to help.