Ever thought that roaming around is tiring? For me, it wasn’t until I encountered altitude sickness that I began to agree. I was on my way to Gangtok from Darjeeling when the height of 6,700 ft. caught up to me.

I advise that you fill your tummy before you get in a car for Gangtok because if you aren’t full you are going to get super-sick. It is also going to take away the pleasure of watching the glorious scenes unfold before you if you feel ill.

After three and a half hours of journeying, I finally reached my destination. And whereas my Darjeeling’s home stay was a delight to stay in, in Gangtok I got a stinky room at that same price.

My whole day was all about sleep, sleep, and sleep. But even though my hotel room was stinky, it had a convenient location. It was just on the M. G. Marg. Since it is the market area, when the shopping fairy hits you, you can go and shop anytime.

That is what I did during my first day at Gangtok. Sleep and shopping. It was time to get some rest, as the next day I was heading out to see the North Sikkim, and it was going to be exciting!

On May 2nd, my guide Pravin and I set out for a long drive to North Sikkim. My first stop was at the Hill View Point, from here I saw the mighty peaks of K2 as well as Annapurna. It is a joy to see the highest peaks of the world laden with snow. 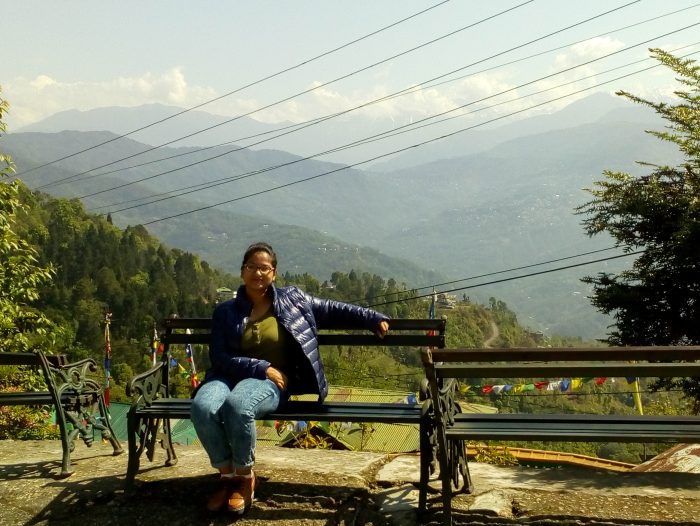 The Hill View Point was on my way to the Rumtek Monastery, which is one of the largest in Asia. It has the Dharma Chakra Center and is also home to the Golden Stupa. Vehicles do not go to the Monastery.

You need to walk half of a kilometer uphill before you see the face of the Monastery. Do not forget to bring identification with you because it is mandatory.

I was the first tourist to visit that day. Since it was off season and I was pretty early I had the monastery all to myself. You can see in the picture below the Hall of the Monastery. On the right-hand side, there is a signboard which reads – “Way to the Golden Stupa.” 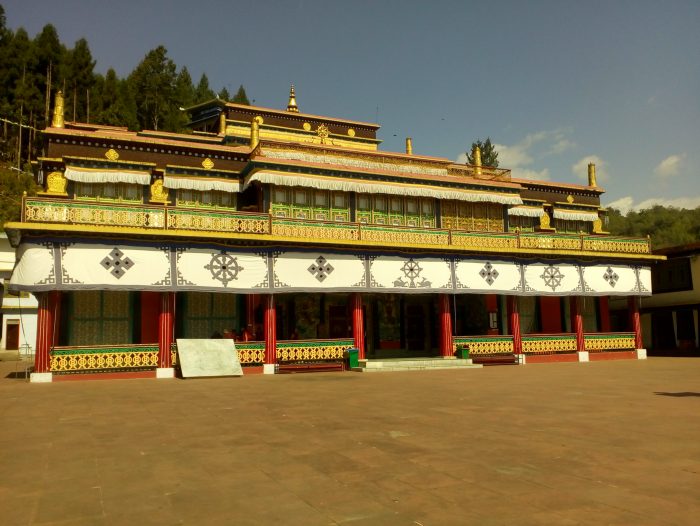 From here, I climbed and reached the Stupa. The Military Guards are at the doors of the Golden Stupa, and there will always be a monk inside. There is a signboard indicating No Cameras, but I sneaked in my cell phone.

Once you step into the room, you are going to think “What is this?” But then the monk comes in and switches on the light. That is when you see the glittering Golden Stupa. And by Golden I mean Golden, there are all kinds of riches in there. You can see it through the glass. Alas! You can’t touch it. 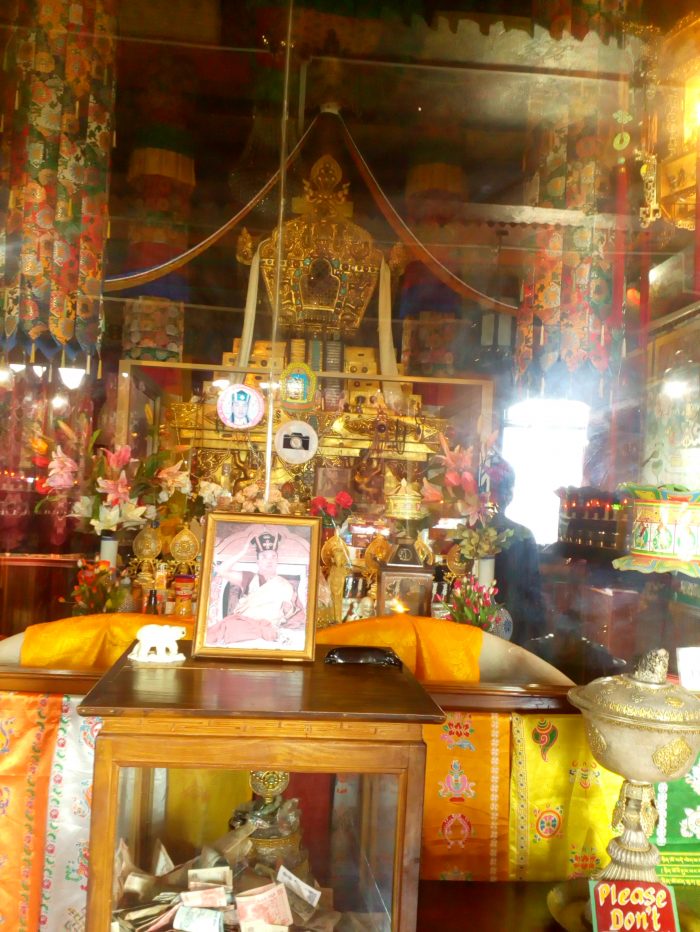 I took all kinds of risks to click a picture of the Golden Stupa. So, the picture is kind of blurry. After my daring stunt at the Stupa, I went to the Nalanda Institute, which is one of the first in the world.

One of the top tourist destination in Sikkim is the Ban Jhakri Water Falls. Unlike the Monastery, the Ban Jhakri waterfalls were overloaded with tourists. 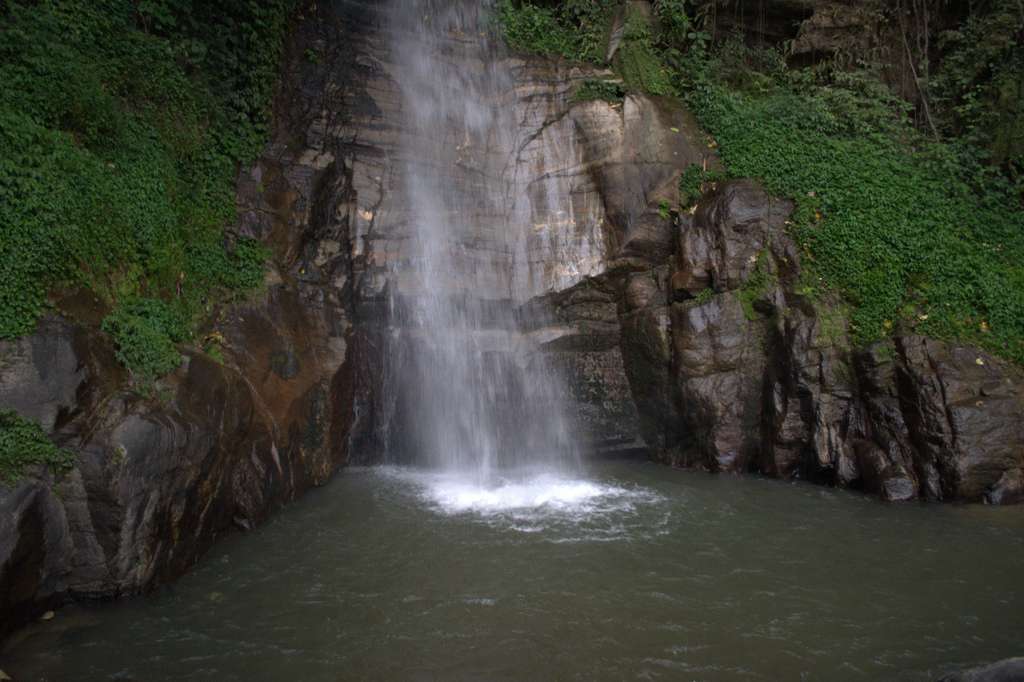 Many of them were hung on tight harnesses, trying to cross the rope bridges across the waterfalls. And even though, I can dare a photograph in a Military secured zone, I shun water. So, crossing the rope bridge was a no-go.

But I did something interesting. I wore the traditional Sikkimese dress and clicked pictures with my sister. And as you can see I totally look like a typical Sikkimese Woman in the pic, don’t I?

It was past lunch time at the falls, and I was super hungry. We set out to the Tashi View Point because my guide told us it is where we could eat lunch. Sadly, the only thing available there was pineapple.

The view of Kanchenjunga from the Tashi View mount is stunning. Luck wasn’t on our side though, the clouds shrouded the peaks and even the afternoon sun did nothing to blast it away. Yet, I viewed all the other peaks that were visible to my glassed eyes.

After seeing the best zoo in India, Padmaja Naidu Zoological Park, I wasn’t sure I would like the Sikkim Zoological Park. But mate! I was wrong. Where PNZP is man-made and skilfully organized, Sikkim Zoo is wild and untamed. 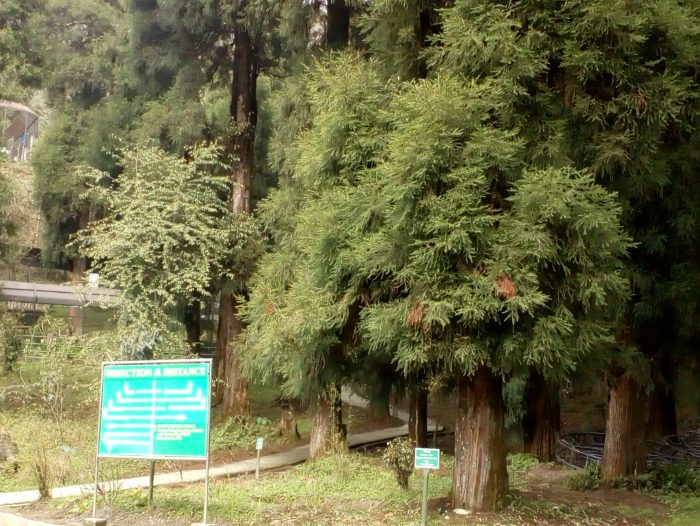 I loved the raw, untamed beauty of the park. You have to walk around in the woods to see the animals. It feels surreal. First on the list was the common leopard, then came the cute red Pandas followed by a leopard cub.

I was on my way strolling alongside my sister when I heard a deafening howl. We were on our way to see the Himalayan Wolf. But after following the directions, we reached a point where the road was blocked with a sign “Himalayan Wolf Under Treatment.”

That was when we heard the howl again. You can well imagine, walking through the woods on a snowy day and hearing the howl of an ailing wolf. It still gives me chills.

A long day of sight seeing was coming to an end and my guide wanted it to be special. So he took me to the yearly flower exhibition that takes place in Gangtok. I have very little knowledge about flowers. But what can I say? They are pretty. 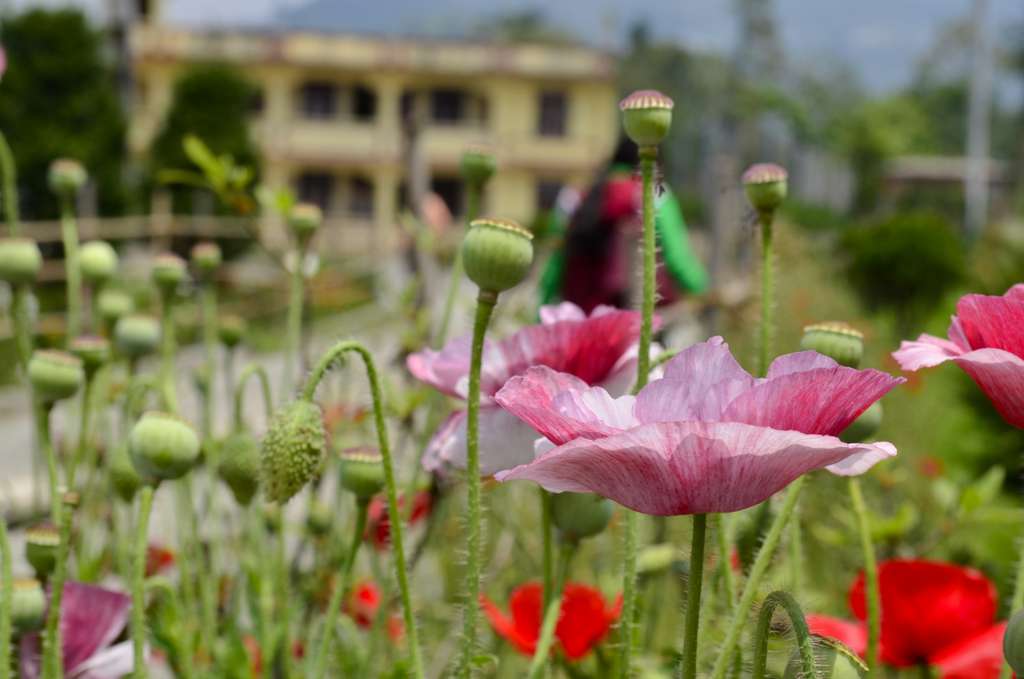 I have a long list of fears, and the top on the list is water, in the second place is heights. I even fear taking escalators. But it was a trip where I wanted to try new things. So, I took the chance and rode the ropeway.

The view of the mountains beside and the city below was astounding. You can see the picture of the city below. We rode until we reached Deorali, flying over the traffic and through the valley. And after riding 20 minutes on the ropeway, I thought “Heights can be beautiful.” 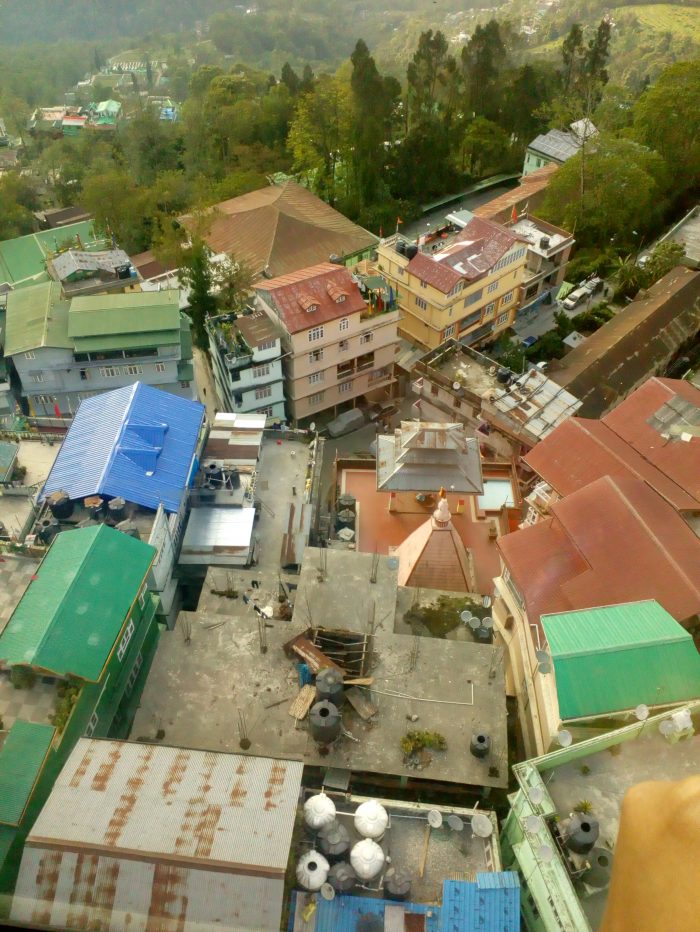 So, that is how my second day at Gangtok came to an end, with me fighting my fears. That is what traveling does friends; it frees you.