With year-round good weather (with the exception of hurricane season in the late summer and early fall) and hundreds of islands to explore, the Caribbean offers something for almost everyone.

Most of the islands in the Caribbean are strung between North and South America. They’ve long been known as a resort vacation destination for honeymooners and retirees and are a major area for cruise ships.

However, in recent years, the growing movement toward eco-tourism and backpacking has started to open up the Caribbean to more independent travel. 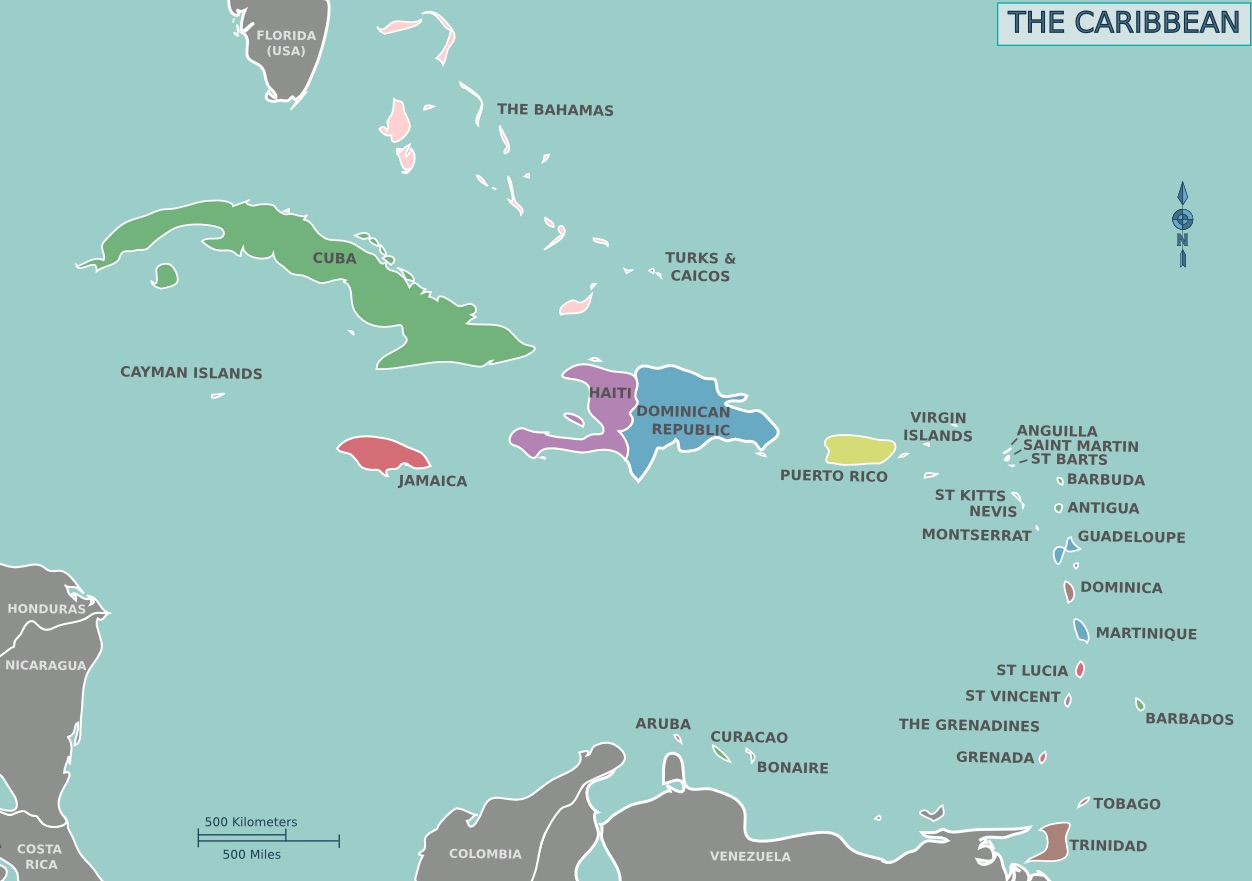 Photo by Cacahuate CC BY SA 4.0

For a detailed list of all Caribbean islands, please visit our Islands of the Caribbean page.

For a high-level mental picture, see the above photo and notice the following five biggest islands in the Caribbean:

Everything else is tiny islands and are better suited for a Cruise trip.

Similar to the list of the biggest islands above, the top 10 biggest cities in the Caribbean are:

Countries of the Caribbean

The islands in the Lesser Antilles are generally small islands. Many of them are dependencies of other countries while are some of them are sovereign countries. These are:

The ABC Islands are very popular with American tourists and are the dependencies of the Kingdom of the Netherlands. These are:

Further to the west and south, there are various less frequently visited islands that belong to countries in South and Central America but are often considered part of the Caribbean due to cultural reasons. Those islands belong to:

Things To Do In Caribbean

Photo: Life is really good / The Art of Travel Partners

The Caribbean islands are famous for the three S’s: Sun, Sea, and Sand. You will find plenty of all the S’s here.

There are all kinds of beaches from touristy ones with plane or shiploads of tourists to exclusive and expensive private islands, and of course, places popular with locals. Some famous beaches include the Seven Miles Beach in the Cayman Islands and the Arashi beach and Baby Beach in Aruba.

Traditionally beach-tourism to this part of the world has been about resorts, cruises, and package trips, but independent travel is certainly also possible.

While the indigenous heritage has all but disappeared, apart from the small remnant of the Carib people, who live in Dominica, the oldest colonial cities of the Americas can be found in the Caribbean.

Perhaps no surprise as this was where Columbus and other Europeans first set foot in the New World, and several islands are still dependencies of France, Netherlands or the UK.

Many of the world heritage sites in the Caribbean are colonial old towns, including ones in Havana, San Juan, Curaçao, and English Harbour.

Back then, the Caribbean islands also became a major destination for Africans that the colonizers forcibly brought in to work as slaves. Needless to say, slaves lived under inhumane conditions with hard work, violence, disease, and starvation making up their daily life.

Slavery is long gone, some former plantations have now been turned into memorials, for instance, the Slave Huts on Bonaire. Black and mixed people make up a majority of the population of the Caribbean today, and the local culture has African influences, including the voodoo religion of Haiti, the carnival and various styles of Caribbean music and dance.

Natural attractions (other than the aforementioned beaches) include rainforests, volcanoes and other geologically interesting features such as the Boiling Lake in Dominica. Other interesting mountains include the pitons in Saint Lucia (pictured on their national flag) as well as Pico Duarte in the Dominican Republic, which is the highest point in the Caribbean.

Just traveling around the Caribbean can be exciting too, whether you do it by boat, plane or road. On Saba, you can land and take off on the world’s shortest commercially used runway.

Some of the unique and cool places to check out on your Caribbean adventures:

We’ll keep adding to the above list as we continue to explore the Caribbean paradise. If you have a suggestion, please leave it in the comments below.

While Spanish influence is strong in many parts of the Caribbean, indigenous, African and non-Spanish European influences are strong or even dominant on some islands.

While most of the Caribbean is nominally Christian, indigenous and African rites have been blended with some tenets of Christianity to create new and unique belief systems, and there are also many adherents of the Yoruba religion — called Santeria and Vodun — that came to the Americas with enslaved Africans.

Some islands also have substantial Hindu or Muslim minorities or both, while small Jewish communities on several islands including Curaçao are among the oldest in the Americas. Jamaica is famously the wellspring of the Rasta religion.

The Caribbean is known worldwide for its African-influenced music, including charanga in Cuba; merengue in the Dominican Republic; and ska, reggae, and dancehall in Jamaica.

Whether you are on a cruise excursion or you are staying at a resort in one of these beautiful Caribbean islands, you must try:

English, Spanish, Dutch and French respectively are spoken on various islands, depending largely on its former colonial power.

However, the majority of the population might not speak the metropole-version of said language but rather a creole, which often incorporates a lot of words from other languages (usually African and/or Native American) and can sometimes differ so much in grammar and spelling as to be unintelligible to even native speakers of the European language the Creole is based on.

The well-educated upper class and those who work in the tourism industry will usually be able to speak a version of the national language closer to what European visitors are used to, and they will often be able to hold a conversation in one or several other European languages as well. However, the likeliness decreases the further you get away from big cities and major tourist hot spots.

As most of the Caribbean has a long history of both slavery and racial discrimination, and Creoles arose with that background and still sometimes have a stigma attached to them, you should be extremely cautious not to say anything negative about the Creole languages, their speakers, or their intellectual background.

Believe it or not, political tracts and works of literature have been written in various Caribbean creole languages for decades now, and to give just one example, the Jamaican Patois of Bob Marley is just as capable of expressing complex topics as are any American or British pop songwriters.

In general the climate of the Caribbean is tropical with little change in temperature over the course of the year, however, rainfall does vary by season and there is also a pronounced hurricane-season with a handful of major tropical storms passing through the region each year.

Two closely related sports that are popular in the Caribbean are baseball and cricket.