Jamaica is located in the Caribbean. It is the third most populous anglophone country in the Americas, after the United States and Canada.

Jamaica exports coffee, papaya, bauxite, gypsum, limestone, and sugar cane. The country used to have dense forests, but after the Spanish settlement, an enormous amount of trees were cut down. Then the British Empire rules it for 255 years!

Things To Do In Jamaica

Jamaica’s motto and nickname for the country is called “Out of Many, One People”. When you do get a chance to go, the country has a rich biodiversity that needs to be seen. 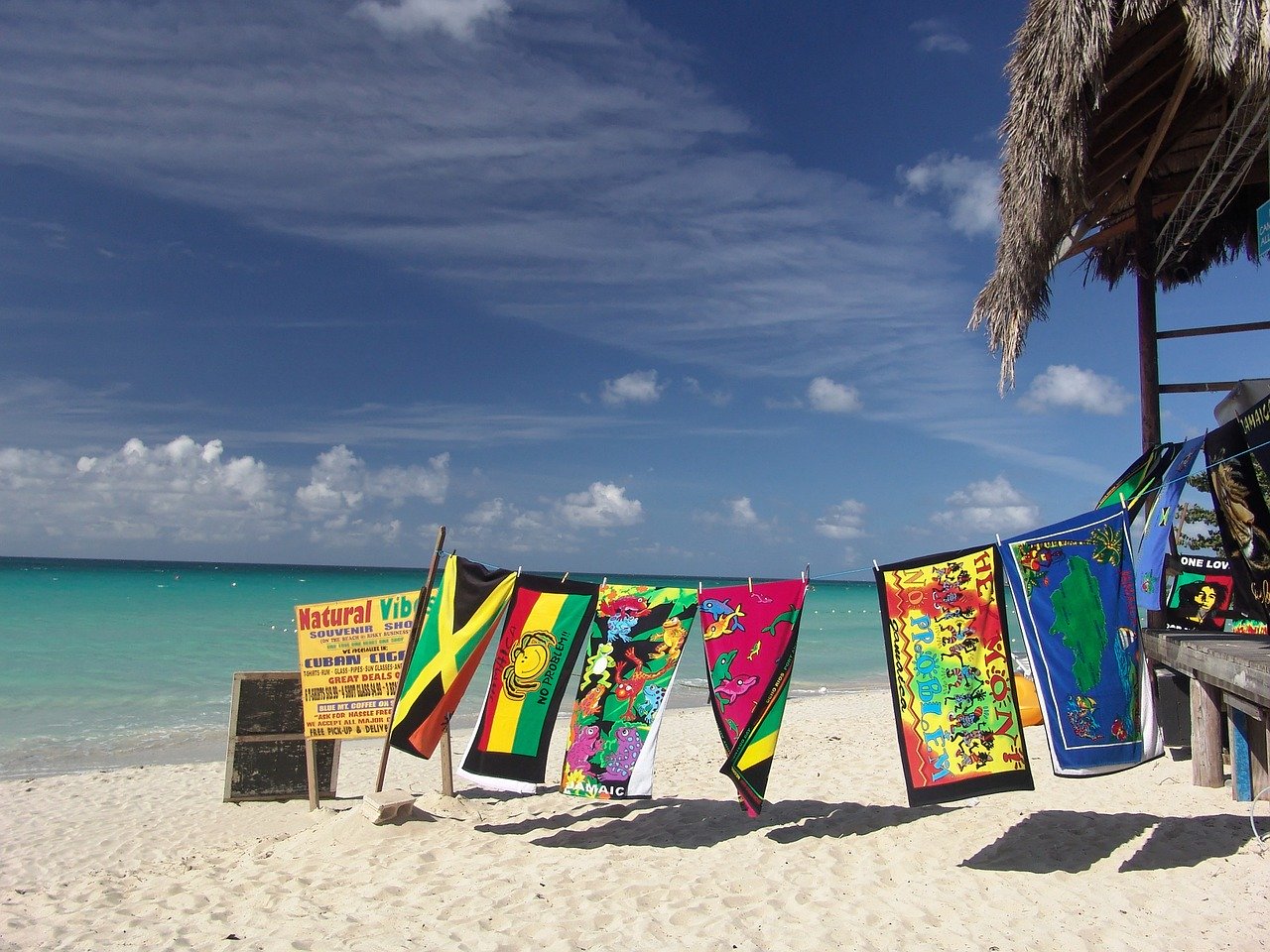 There are more than 50 beaches around Jamaica. 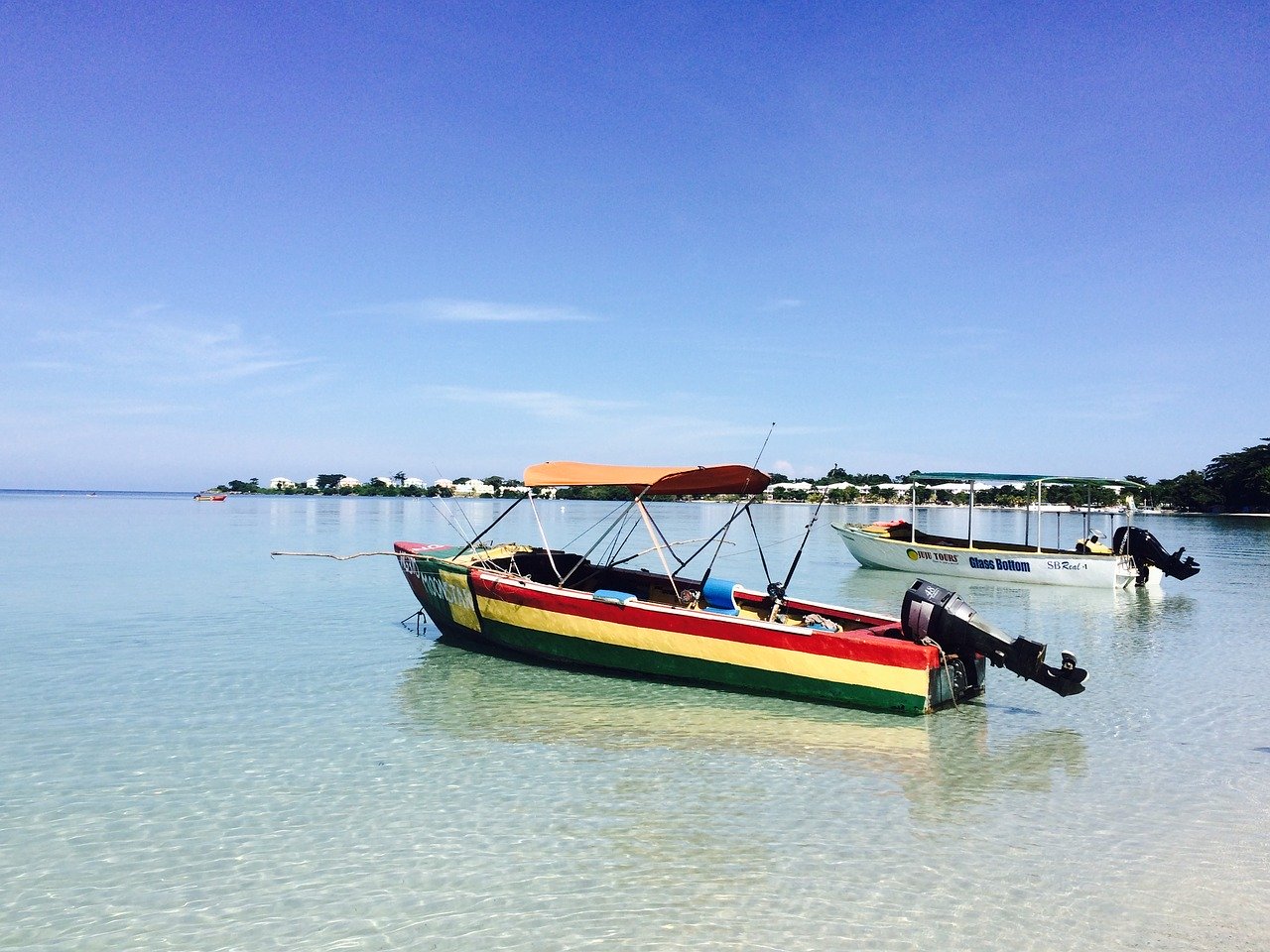 Spend a day at Negril 7-Mile Beach and finish off at Rick’s Cafe for a spectacular sunset and watch even more fantastic cliff diving (pictured below). 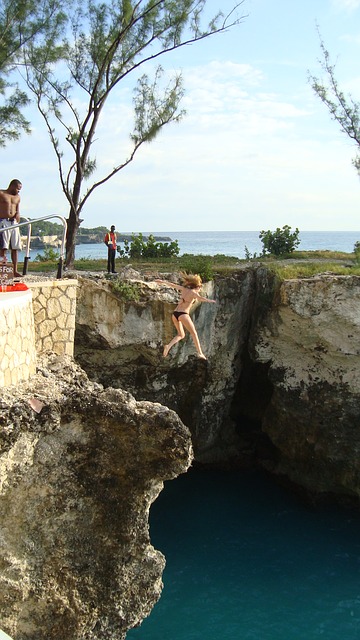 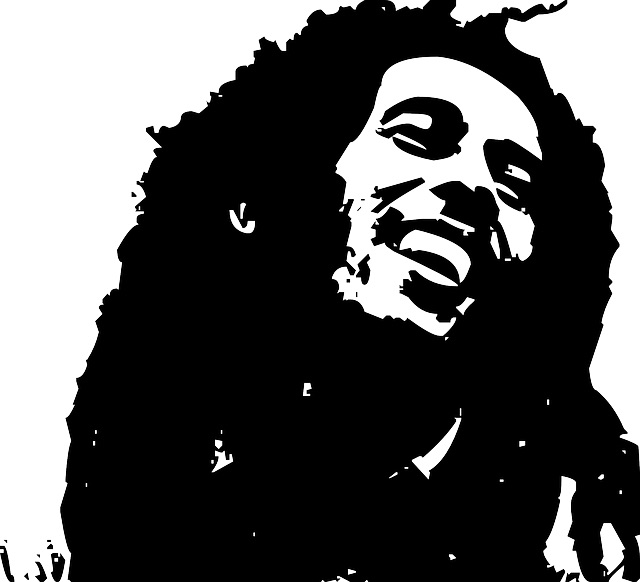 Nine Mile is where Bob Marley was born and now buried. The journey up into the mountains lets you experience the heart of the country

Bamboo rafts poled by guides along a placid river from a launch area with a picnic area & a bar. This is something not to be missed when in Jamaica.

Overall, the rafting takes about an hour and your guide will tell you about the local flora and fauna seen around the river and as well as Jamaican history.

Dunn’s River Falls is a must-see and do if visiting Jamaica. It is located in Ocho Rios. The 600 ft (180 m) cascading falls are gorgeous.

You can actually climb right up the falls. It’s an amazing experience! Give it a try if you’re up for a breathtaking challenge. 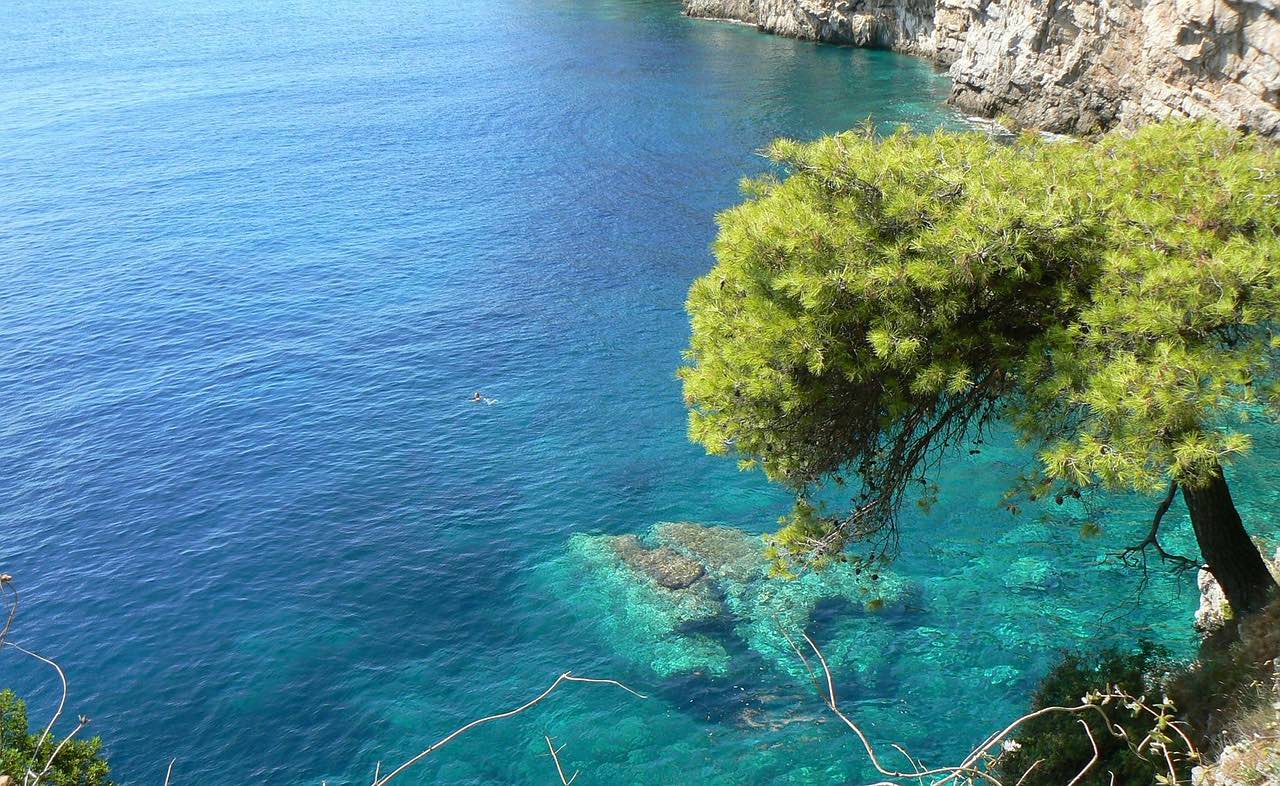 Located in Port Antonio, Blue Lagoon is a wildly popular travel destination for honeymooners as well as a family traveling with kids.

With glistening, turquoise blue waters surrounded by lush greenery, Blue Lagoon is a vision of beauty.

Mystic Mountain has a bob-sledding ride combined with options for ziplining, a water slide, and an aerial tram. The aerial tram is a slower method to learn about the rainforest canopy. 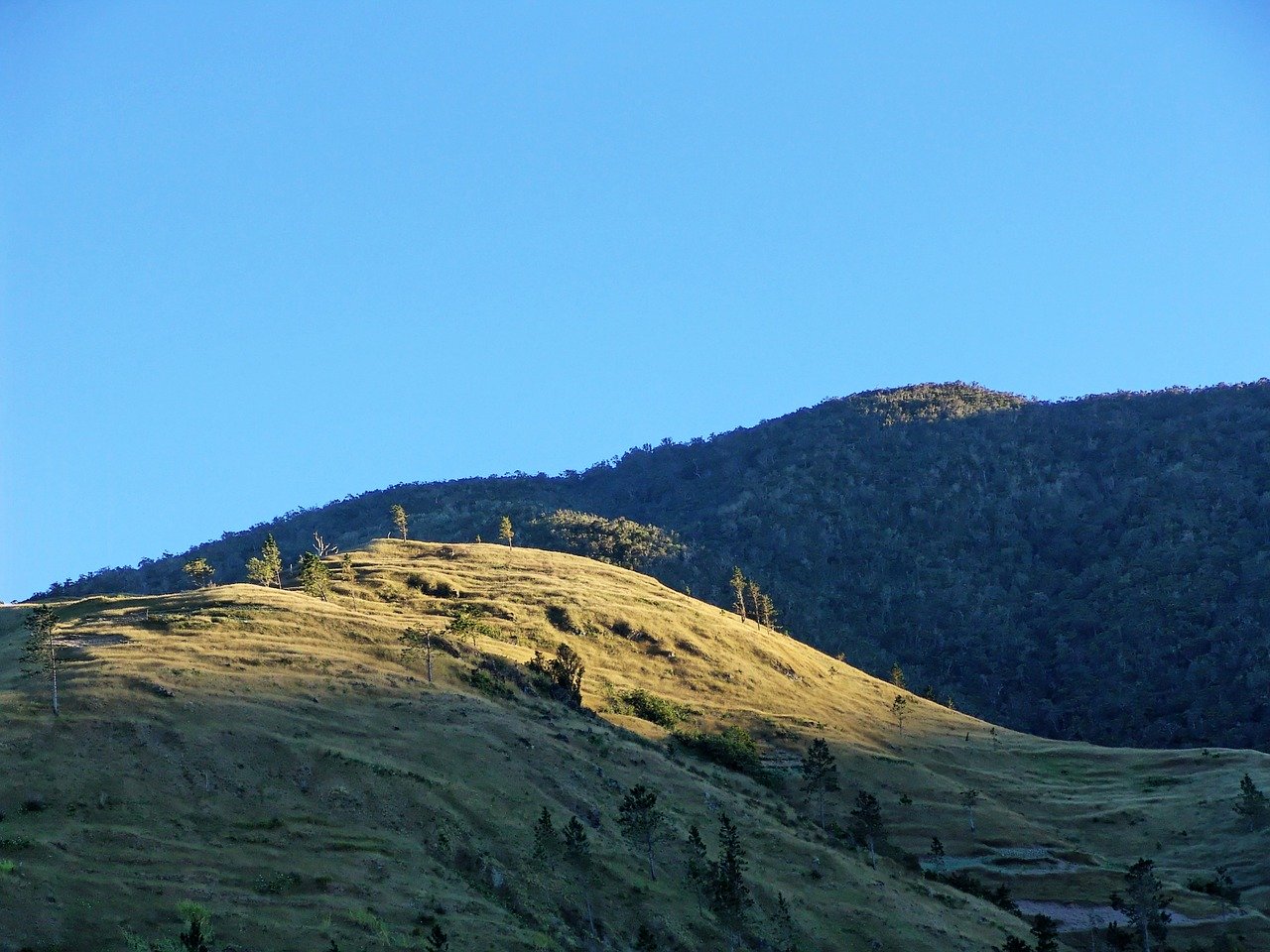 Going zip-lining in the Jamaican jungle is incredibly exhilarating. Most touring companies, as well as cruise liners, will have companies that they work with regularly. 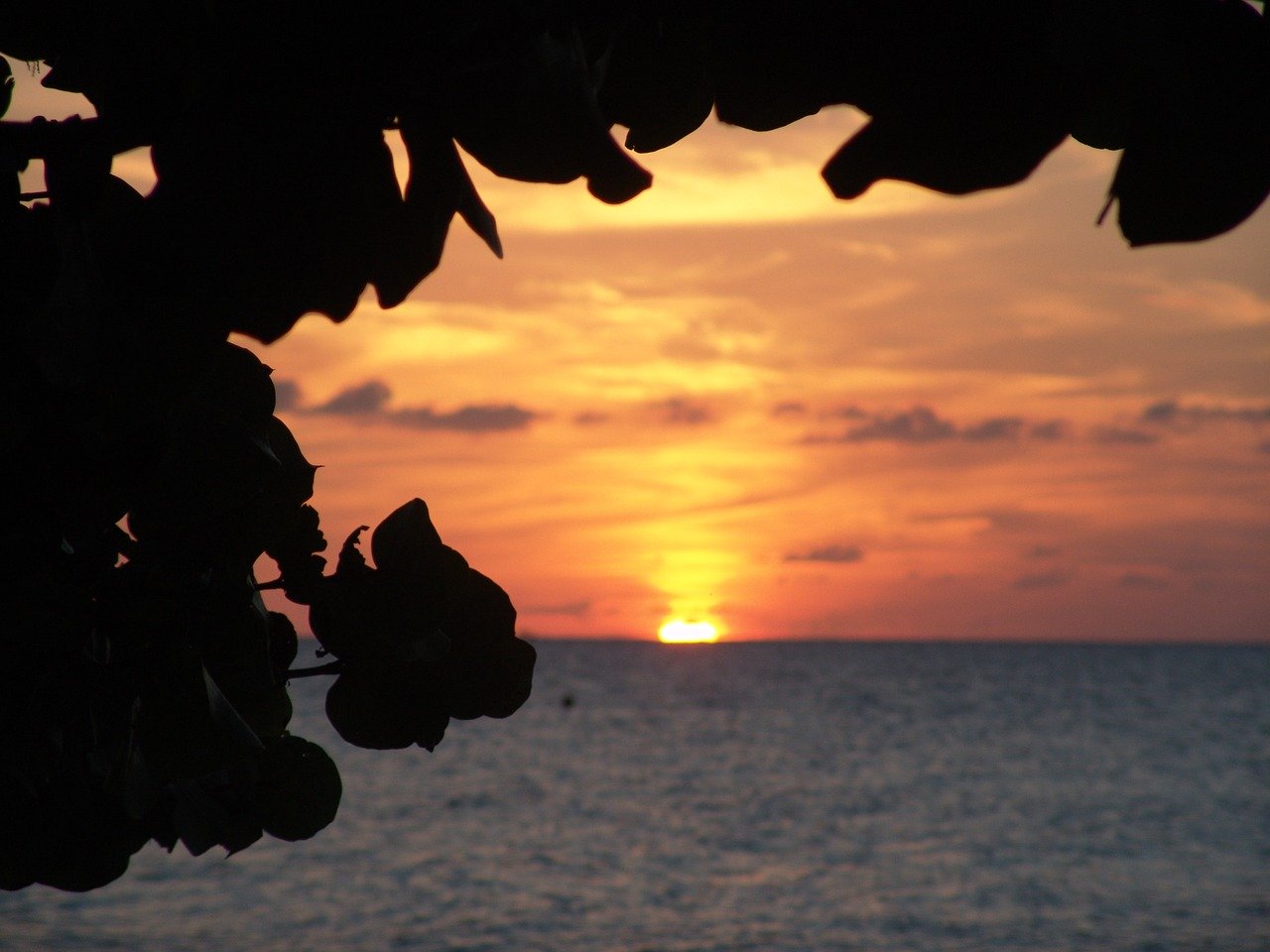 The Black River is one of the longest rivers in Jamaica. Its name refers to the darkness of the river bed caused by thick layers of decomposing vegetation. On this riverboat tour, you can watch over 100 species of birds and crocodiles. 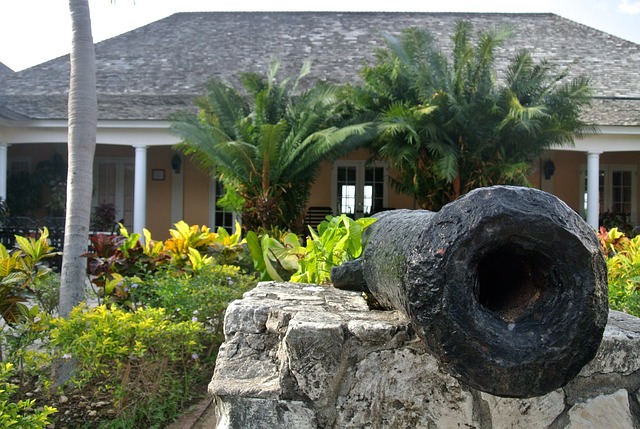 Jamaican food is a mixture of Caribbean dishes with local dishes. Although Jamaican food gets a reputation for being spicy, local trends lean towards more versatile food variety.

Some of the Caribbean dishes that you’ll see in other countries around the region are rice and peas (which is cooked with coconut milk) and patties (which are called empanadas in Spanish speaking countries).

The national dish is Ackee and saltfish, and must be tried by anyone visiting the island. It is made with the local fruit called Ackee, which looks like scrambled eggs, but has a unique taste of its own and dried codfish mixed with onions and tomatoes.

You probably won’t get a chance to try this food anywhere else, and if you really want to say that you did something uniquely Jamaican, then this is your chance.

Freshly picked and prepared ackee is 100 times better than tinned ackee, but must be harvested only when the ackee fruits have ripened and their pods opened naturally on the large evergreen tree on which they grow: unripe ackee contains a potent toxin which causes vomiting and hypoglycemia.

Don’t worry. locals are experts at preparing ackee and will know how to pick it safely.

Another local food is called bammy, which was actually invented by the Arawak (Taino) Indians.

It is a flat floury cassava pancake normally eaten during breakfast hours that kind of tastes like cornbread.

There is also hard-dough bread (locally called hard dough bread), which comes in both sliced and unsliced varieties. Try toasting it, for when it is toasted, it tastes better than most bread you’ll ever eat.

If you are looking for dishes with more meat in them, you can try the jerk flavored foods. The most popular is jerk chicken, although jerk pork and jerk conch are also common.

The jerk seasoning is a spice that is spread on the meat on the grill like barbecue sauce. Keep in mind that most Jamaicans eat their food well done, so expect the food to be a bit drier than you are accustomed to.

There are also curries such as curried chicken and curried goat which are very popular in Jamaica. The best-curried goat is made with male goats and if you see a menu with curried fish, try it.

Finally, there is the category of “ital” food, the domain of practicing Rastafarians, who abide by strict dietary guidelines. This type of food is prepared without the use of meat, oil or salt, but can still be tasty due to the creative use of other spices.

Ital food is not generally on the printed menus in the upmarket tourist restaurants and can only be found by going to specialty restaurants. You may have to ask around to find an establishment that serves Ital food as it is not very common.

You may even want to pick up a piece of sugar cane, slice off some pieces and suck on them.

Fruit and vegetables in Jamaica are plentiful, particularly between April and September when most local fruits are in season. The many mango varieties are a ‘must-have’ if you are visiting during the summer months.

If you have not tasted the fruit ripened on the tree, then you are missing out. Fruit picked green and exported to other countries does not compare.

Try drinking ‘coconut water’ straight out of the coconut. This is not the same as coconut milk. Coconut water is clear and refreshing, not to mention the fact that it has numerous health benefits.

If you want to drink some local soda, you can try Bigga Cola, Champagne cola, or grapefruit soda called “Ting”.

You can try the local lager called Red Stripe (which is exported to many countries in the west) and Dragon Stout. You can also try Ginger beer.

A local hard drink is a Jamaican rum, which is made from sugar cane. It normally tends to be overproof and drunk with cola or fruit juice.

Drink with caution! It’s not designed for someone who is drinking it for the first time. It can be up to 70% proof.

Trains are not an option you should choose in Jamaica. They are not efficient and have poor connectivity, whereas you can use buses, which are cheap and faster.

There are two types of taxis: local and tourist. But if you take a local taxi, it will be considerably cheaper.

Taxis are multiple and easy to find. They generally have meters, but you should still agree upon the price, before the ride. Car hire is also available in major towns, hotels, and airports and most offer unlimited mileage.

Drivers need to be over 25 years old, provide a valid driver’s license and a credit card. Cars drive on the left side of the road here. And roads are in reasonable condition. 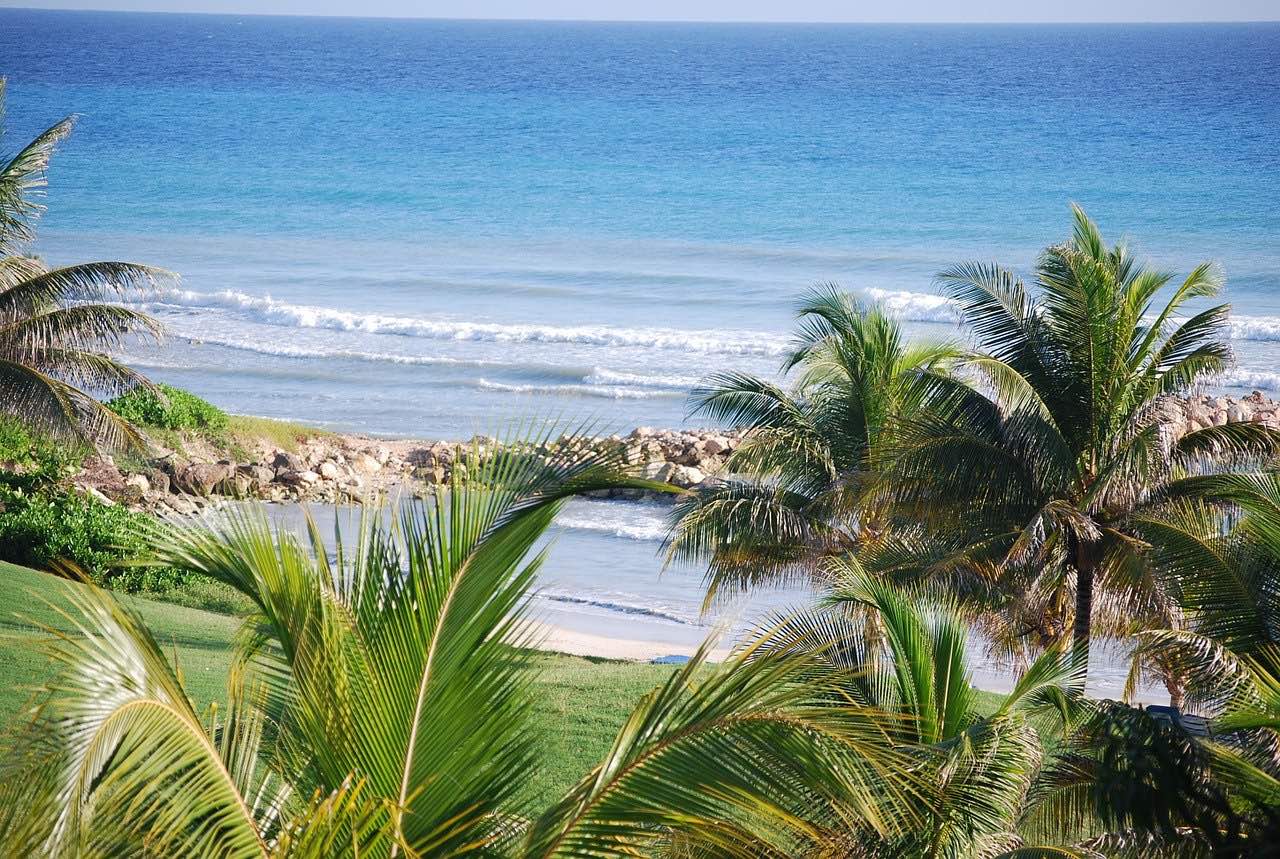 The majority of Jamaicans are descended at least partially from the many Africans who were enslaved and transported to the island.

Jamaica also has sizeable numbers of Whites and Coloreds, persons of Syrian/Lebanese descent, and a large population of Chinese and East Indians, many of whom have intermixed throughout the generations.

Mixed-race Jamaicans are the second-largest racial group after Black Jamaicans.

Christianity is the majority religion on the island, and the Rasta community, which Jamaica is known for internationally, has also featured prominently in its history.

As in other Caribbean areas, West African religion and folk beliefs (locally called Obeah among other terms) are sometimes practiced by some while being completely taboo for others.

There are also communities of Muslims and Hindus, together with a small but quite ancient Jewish community.

Jamaicans speak English or English Creole, known as Patois. Sometimes, they have an accent which is hard to understand. Foreigners will have a bit of trouble knowing what they are saying.

Most places and resorts accept the US Dollar. However, local shops and street vendors may not. That is why you need to make sure that you exchange some amount of money.

Exchange facilities are available at airports, hotels, cruise ports, and commercial banks. Hold onto receipts when changing money as the black market exchange is illegal.

All major credit cards are acceptable and ATMs are available widely.

The climate in Jamaica is tropical, with hot and humid weather, although higher inland regions are more temperate. Some regions on the south coast are relatively dry rain-shadow areas.

Jamaica lies in the hurricane belt of the Atlantic Ocean; as a result, the island sometimes experiences significant storm damage.

In Jamaica, they use electric sockets of types A and B, as in the USA. The standard voltage is 110 V.