Tamil Nadu is one of the most traditional states in Southern India and is well known for its numerous mega-temples, it’s strict adherence to its traditions, and language and of course the mouth-watering dosai!

It is surrounded by Kerala to the West, Andhra Pradesh and Karnataka to the North, and Indian Ocean to the East. The southernmost tip of India, Kanyakumari, is in Tamil Nadu.

Things To Do In Tamil Nadu

Tamil Nadu is the historical home of the famous Chera, Chola, Pandya, and Pallava kingdoms which thrived in the ancient and medieval era. You can go temple hopping and be amazed at their grandeur, colors, and mega-construction.

Alternatively, you can go to the coastal areas, relax by the beach. Or, go to one of the most beautiful hill-stations in the entire country.

If temples and beaches are not your thing, can go shopping for the traditional Sarees. Kanchipuram Sarees are especially famous and people from all over the South make it here in times of weddings and special occasion.

You may want to check out Tanjore paintings at Thanjavur, made with real gold and jewels.

The terraced city of Kodaikanal

The capital city has a wide range of choices ranging from relaxing at the longest beach in the country, Marena; to shopping in the equally long lanes of TNagar, Pondy Bazar, or Purshawakam.

Indulge in some street food, on the lanes 0f the city while walking past some amazing monuments built during the British Era, like their central Railway Station or the Portuguese Santhome Church.

For a complete list of Things to Do in Chennai, please visit our Chennai Travel Guide.

Tamil Nadu is home to numerous temples. Few of the most famous ones are located at: 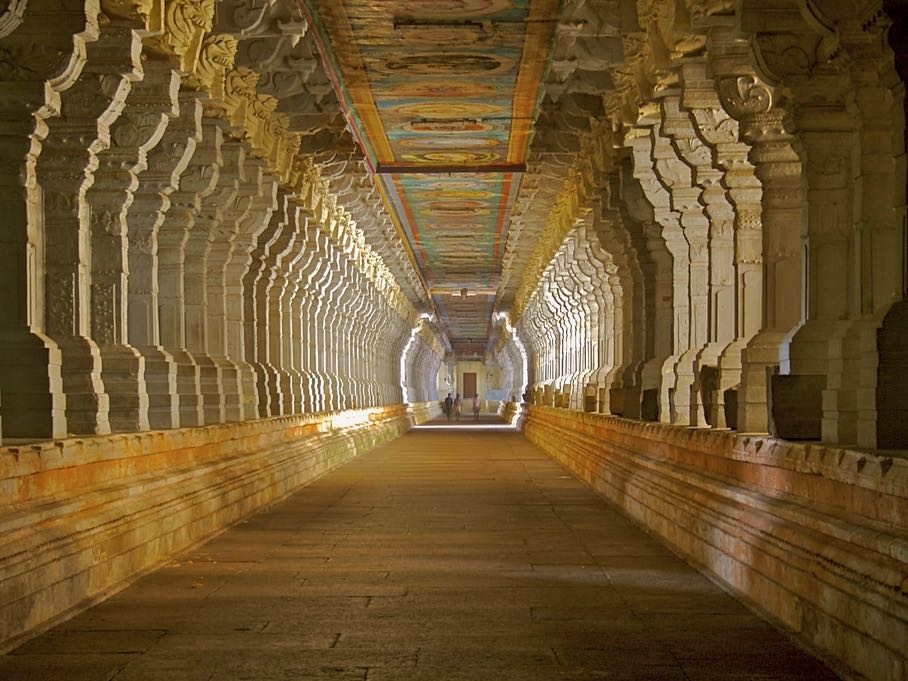 Colonnaded hall at the temple complex 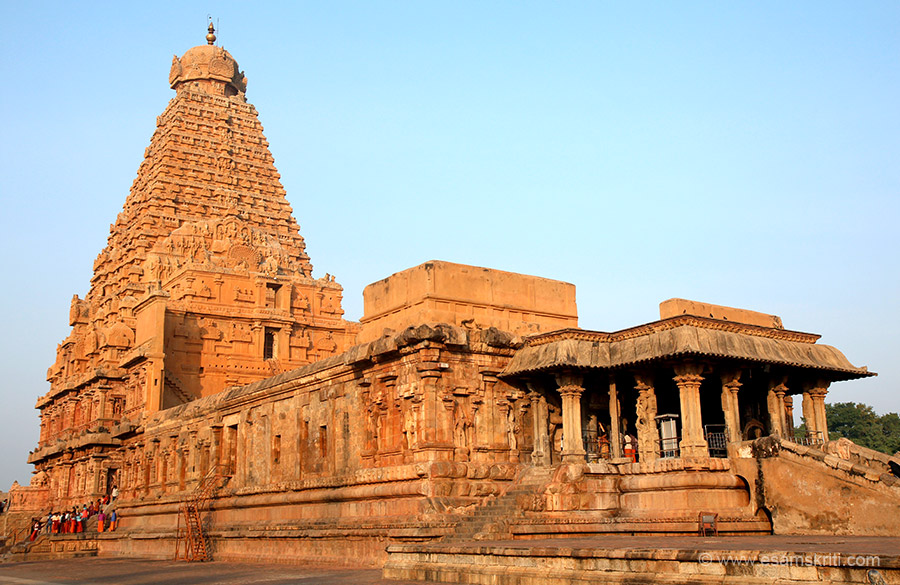 Sometimes referred to as the “Niagara Falls of India,” it is known for bathing areas, oil massages and boat rides, all while admiring the thundering falls. Since the force of the water is mighty you are only allowed to stand on a bridge to view the falls for few minutes and not allowed to venture into the actual falls. 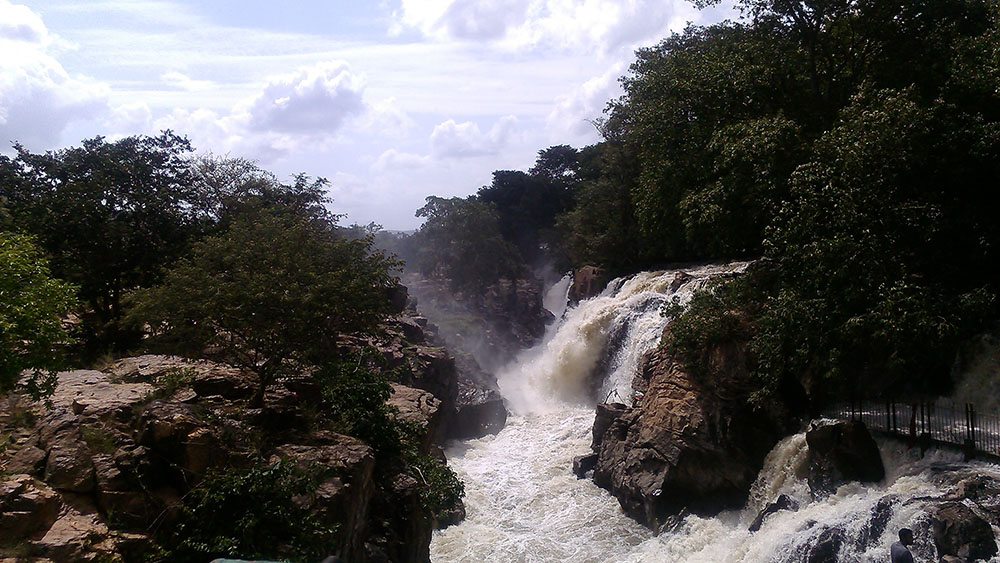 The Hogenikkal falls in full flow

Mahabalipuram is a town on a strip of land between the Bay of Bengal and the Great Salt Lake. It’s known for its temples and monuments built by the Pallava dynasty in the 7th and 8th centuries located right next to the sea. The seafront Shore Temple comprises 3 ornate granite shrines.

Krishna’s Butter Ball is a massive boulder balanced on a small hill near the Ganesha Ratha stone temple. 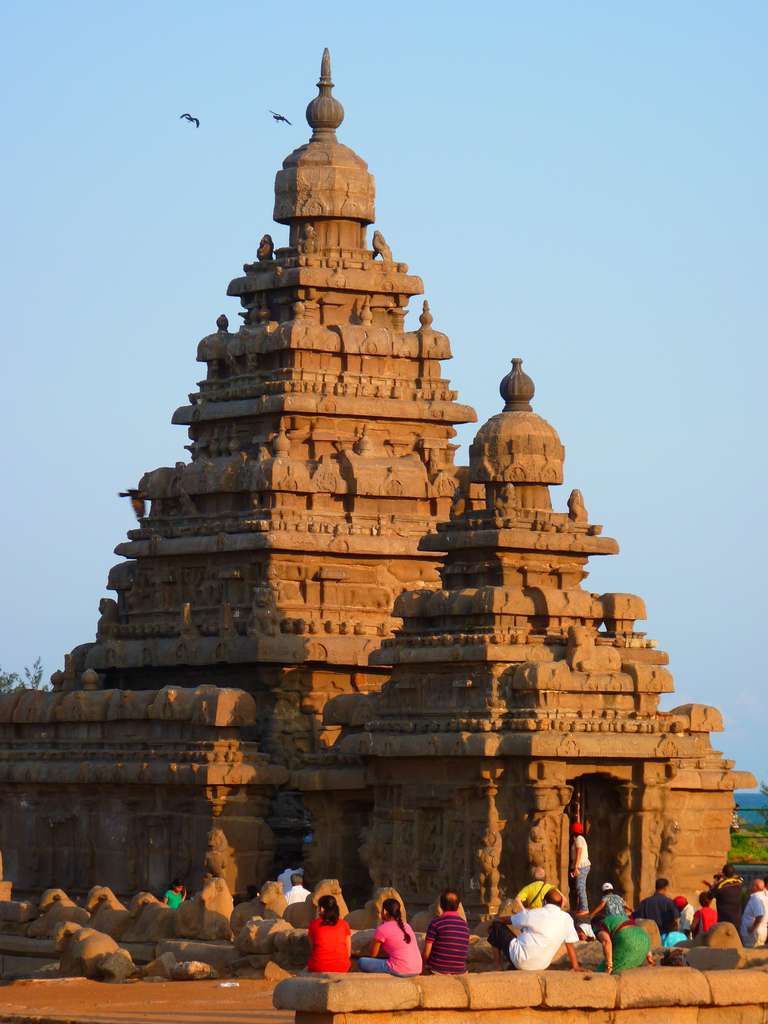 The temple by the shore at Mahabalipuram

Ooty is a hill station in the Nilgiri Hills, in the Indian state of Tamil Nadu. Located between Mysore and Coimbatore, the region is connected by the Nilgiri ghat roads and Nilgiri Mountain Railway. Ideal getaway during the hot summer months, it still retains a lot of its green cover but is slowly succumbing to tourist footfall

For a complete list of Things to do in Ooty, please read Ooty Travel Guide. 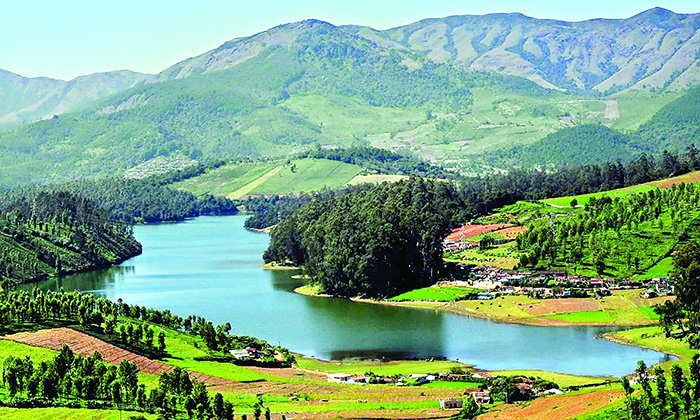 Situated 7,200 feet above sea level amongst the picturesque Western Ghats of India and located in the Palani Hill Rang, Kodaikanal is known as one of Tamil Nadu’s finest hill stations.

For a complete list of Things to do in Kodaikanal, please read Kodaikanal Travel Guide.

The major industry is ecotourism with resorts amid high trees and plantations. It has a lake surrounded by gardens and trees. Other major attractions include Killiyur waterfalls, Lady’s seat from where you can view the whole plains below and few temples, because it is in the state of temples, after all.

Tamil Nadu is home to numerous National Parks. Here is a list of the famous ones:

Turtles at Gulf of Mannar 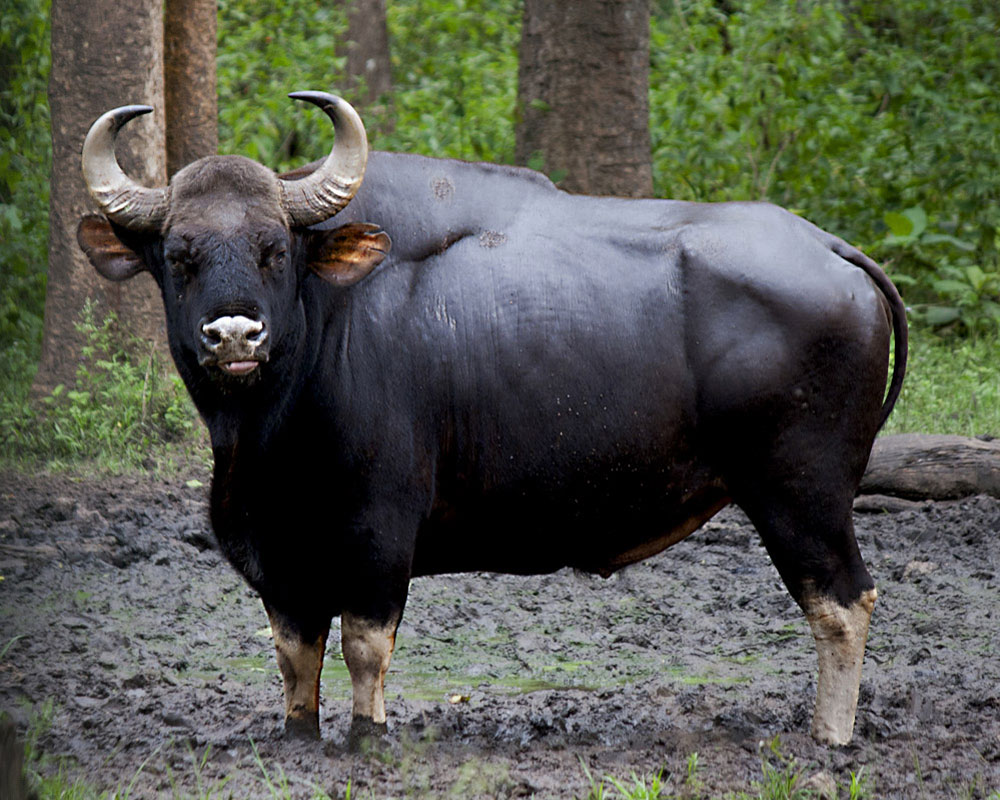 Bison can be spotted in Kodaikanal

Located in the capital city of Chennai, this is stated as the longest beach in the world which stretches a span of 13km. Best visited during the early morning to see the sunrise or late evenings after the temperature lowers. You can sit by the water until late night while enjoying some street food or ice cream.

From one end of the road, you get to see the sunrise and then go the other end to see the sunset in the evening. Beyond you can see the Arabain Sea, the Bay of Bengal and the Indian Ocean all merge as one from the lighthouse.

The wide coast of Kanyakumari

At a distance of 13 Kms from Chennai (located in Besant Nagar), The Elliot’s Beach is a well-known destination for people who seek relief from the crowded metropolitan life of the Chennai. The Adyar River drains into the sea here.

Popularly known as ‘Bessie’ among locals, this is an extremely calm and tranquil place. The Beach has become a popular hangout for the young generation. Elliot’s Beach is also a favorite haunt of foreigners where they can peacefully take their sun bath.

Go for a long drive on ECR from Chennai to Pondicherry, experiencing the local architecture of South India at Dakshin Chitra, adventure at amusements parks and watch a humongous collection of crocodiles at one place at Crocodile Bank or Dolphins and Seals jump at Dolphin City 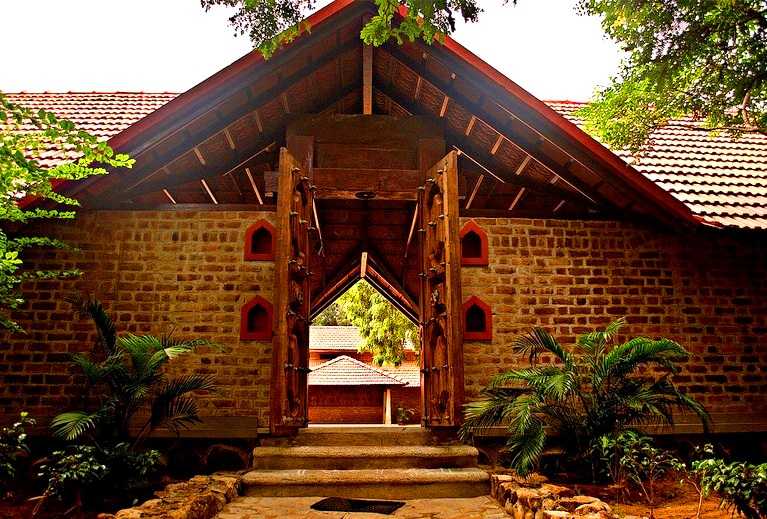 One of the houses on display at Dakshin Chitra Museum 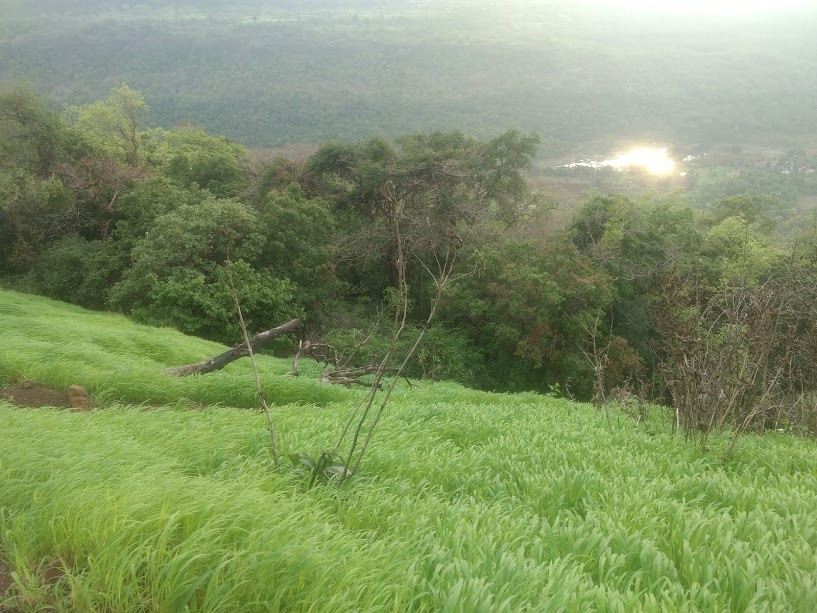 Trekking trail in the Western Ghats

Summers are incredibly hot in Tamil Nadu and unless you can tolerate high temperatures with humidity so it is best avoided during the months of April to July. Best time to visit are the winter where the temperature isn’t very high and you can walk around without much of a hassle.

During monsoon, the many cities usually get water clogged and traveling by road can be tough sometimes. 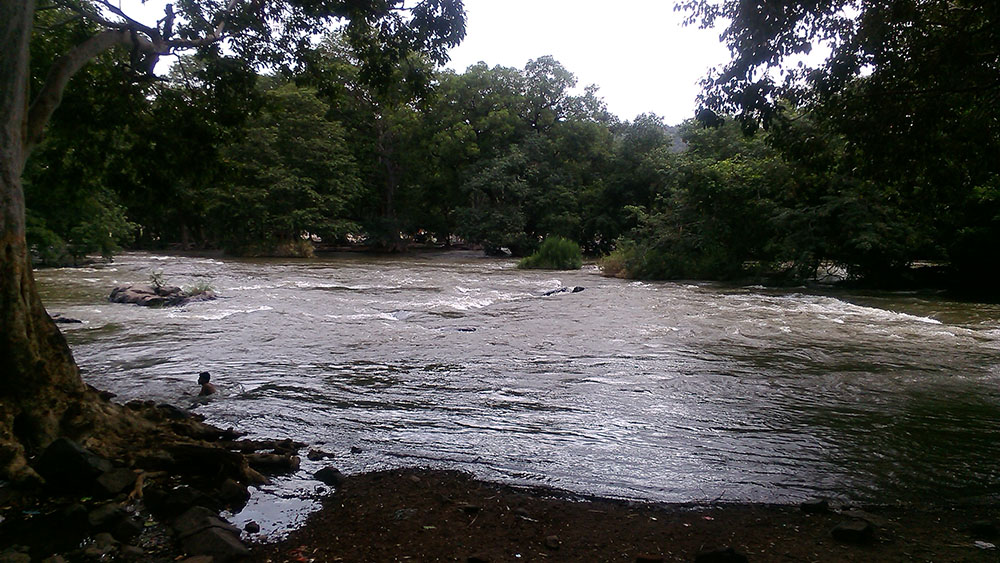 The state is very proud of its heritage and language. They can get offended if you try and talk with them in Hindi (major language in India) and it’s best to stick to English if you do not know Tamil.

Best visited during December and January as numerous fests related to dance and music take place during this time. It becomes the cultural hub for traditional art forms.

Here is a list of major festivals they celebrate and what is worth seeing. 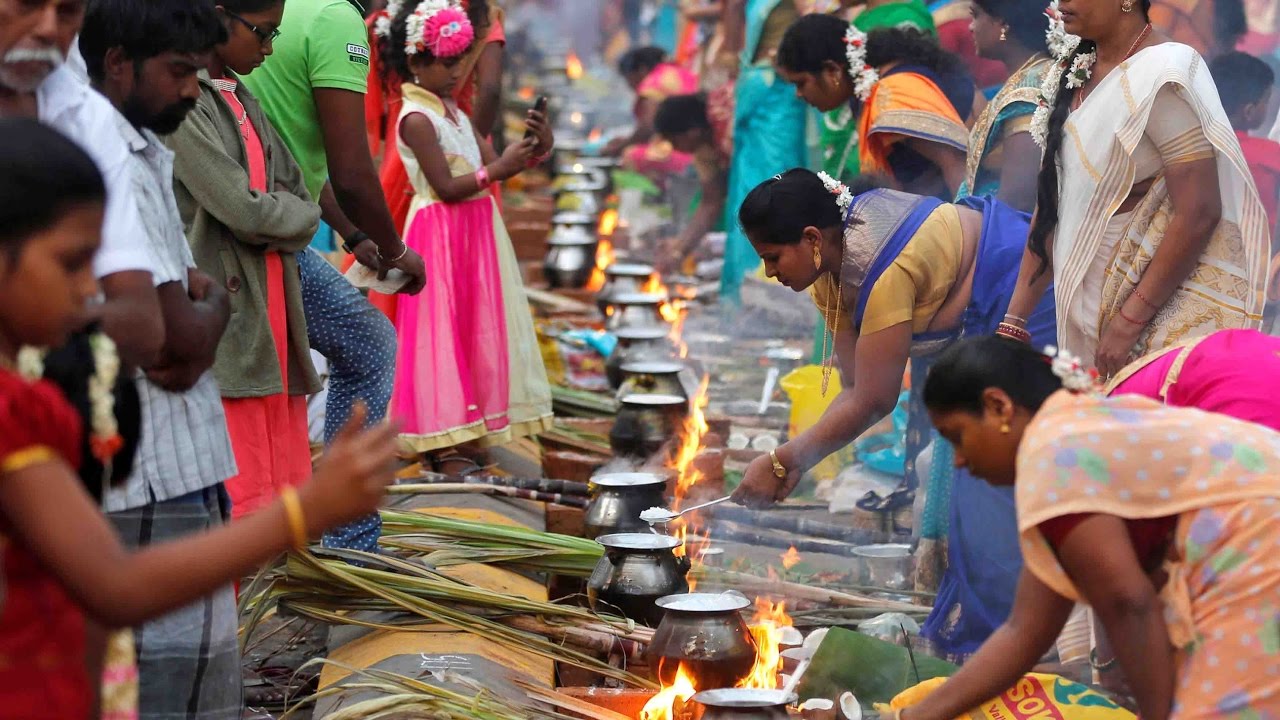 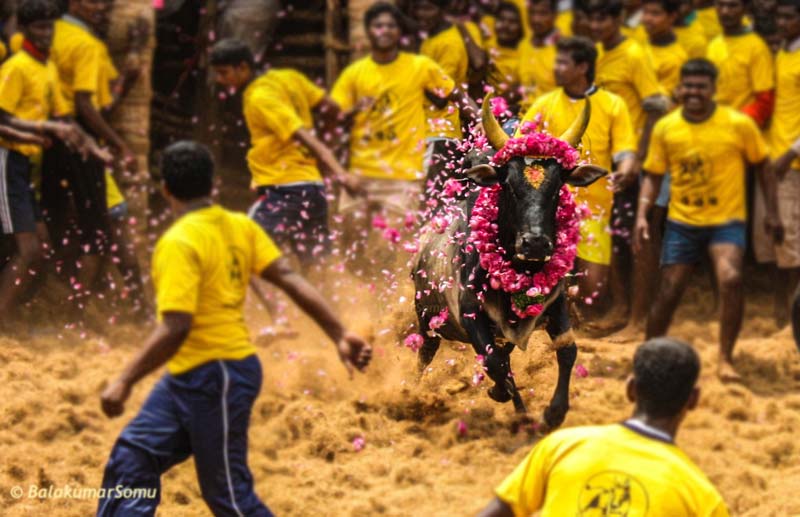 Jalikattu, a traditional event where Bulls are released into a sea of people. 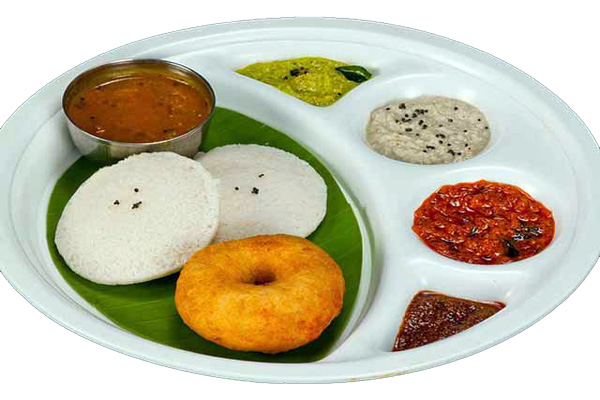 A typical breakfast of 2 Idlis and a Vada

If you were to fly in and around the state, Chennai, Coimbatore, Madurai, and Tiruchirapalli have international airports while there are 7 more domestic airports within the state. So, it is easy to fly from one part to the other.

The government bus service called the TNSTC provides buses of all types to help reach all the corners of the state. Depending on your destination the buses vary from Airconditioned Volvo/Scania buses from one city to the other to local buses running within the city.

You can also move from one part of the state to another by train. Though not as many in frequency as the buses they are also an ideal way of traveling, especially for a night journey. You can book your ticket from IRCTC.

Tamil Nadu has a wide range of accommodation to provide to its visitors, be it the class-conscious tourist or the budget-backpacker. The house owners require the services of helpers to attend to the needs of the tourists. Apart from this, the Tamil Nadu Tourism Development Corporation (TTDC) has 36 Hotels in Tamil Nadu that are hygienic and suits the budget to middle category tourists.

A number of 5-star hotels and resorts are also available if you want to splurge, or resorts by the beach to spend a weekend in the midst of nature.

How Safe Is Tamil Nadu

Generally, Tamil Nadu is one among the safest provinces in India. They respect tourist as long as you don’t hurt their sentiments.

Beware of pickpockets and thieves in buses and trains. If you travel via train, think twice before eating anything offered by other passengers. Also, when traveling with someone from the opposite gender, it would be advisable to avoid too much of physical intimacy, as it may invite unwanted attention and comments in this conservative state.