Recently I had an opportunity to visit Delhi on an assignment with my colleague. Being a travel freak, it has been a long time since I last explored a new place, and Punjab was a new place for me.

My eyes glittered on this news that I will be traveling soon, and seeing the weekend approaching near, my friends and I thought of going on a road trip to Amritsar.

Amritsar, a holy city in Punjab, is the land of Golden Temple and people with golden hearts. It lies 280 miles (450 km) north-west of New Delhi, the capital of India. Being close to India-Pakistan border is just a 45 minutes drive from Wagah Border, with Lahore city on the other side.

Our trip was in the month of January, which is still very cold in Punjab. We heard road trip to Punjab is picturesque view so all of us were excited to experience it.

We rented a cab and left for Amritsar early morning at 5:30 am from Connaught Place so that we could avoid the heavy traffic during Delhi morning rush.

We crossed the borders of Delhi enjoying the thick layer of fog that we can hardly see anyone outside the window and reached 70-mile Dhabha (situated near Samalkha) which is around 75 km from Connaught Place. 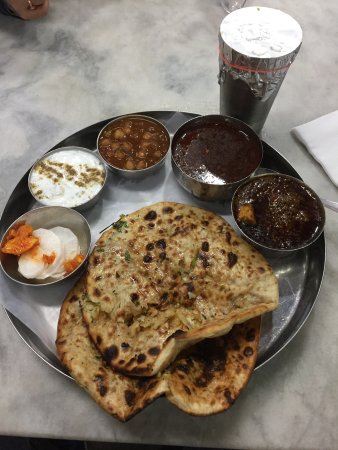 Paratha with chole, salads, curd, pickles and a Glass of Lassi

The road from Delhi to Punjab (NH-3) is very smooth, thus it took us approximately 2 hours to reach Samalkha Since we left early, all of us were hungry, so we stopped at this Dhabha to have some breakfast and enjoy the fog.

This famous dhaba serves authentic Punjabi style food like Chola Bhature, Lassi, Paratha makhan maarke (Paratha with butter on it). It was worth the early morning drive and satisfied our foodgasm.

After having scrumptious breakfast we relaxed there for some time and continued for Amritsar. We still had 7:30 hours long journey left before we could dive ourselves into the holiest city of the Sikhs.

Read: 5 Free Things to Do When Traveling

We didn’t want to miss the Flag Ceremony at Wagah Border so we drove non-stop crossing Panipat, Kurukshetra, Ambala, Ludhiana, and Jalandhar on the way.

Every day the Flag lowering ceremony commences at 4:30 pm in winter and 5:30 pm in summer which is witnessed by thousands of people. During this ceremony, soldiers of both the countries march towards the Wagah gate in a very energetic and passionate way to lower down the flags with full respect. 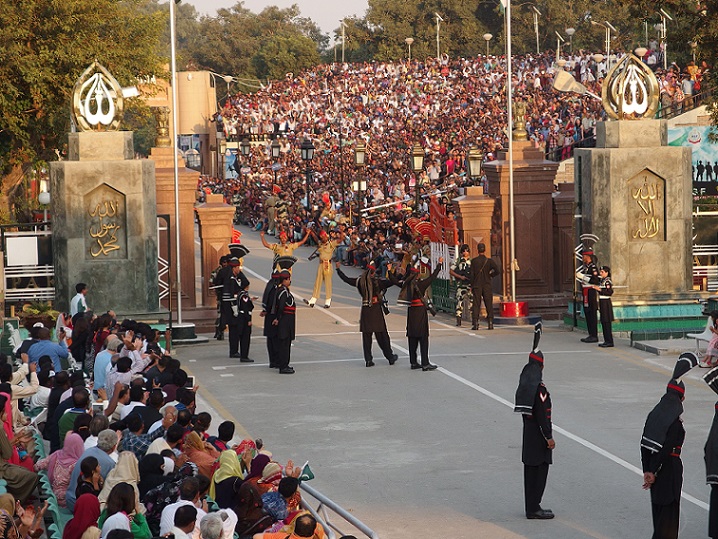 Photo: Top side is India, the bottom side is Pakistan/ CC Guilhem Vellut

With the sound of the trumpet, the 45 minutes ceremony comes to an end and soldiers march back to their flags. We were lucky enough to grab a clear view of the ceremony. The atmosphere was electrified and patriotism filled the air during the ceremony and we were deeply moved by it.

After the ceremony, we left for Amritsar which is 21 miles away from Wagah border. We reached Golden Temple by 6:30 in the evening.

Photo: As seen from the Indian side/ CC Samir

Photo: as seen from Pakistan side / CC Guilhem Vellut

Once we reached Golden Temple, we were starving to our death. Local people suggested to us about Kesar da Dhaba which is located in the market outside Golden Temple. We got our dinner packed and checked in an OYO room nearby the Golden Temple.

Since it was an impromptu trip we did not make any bookings. However, we did not face any difficulties in searching for a night stay. The place has many hotels, OYO rooms for tourists.

After having the delicious authentic Punjabi food, we went to Golden Temple to attend the Hukamnama (prayers).

Pro Tip: If you are short on budget, know that you can spend the whole night in Golden Temple itself.

The insides of the gurudwara is the epitome of peace with the religious patrons of Sikhism singing Gurbani and meditating inside the Guru’s abode.

Pro Tip: Golden Temple is a very peaceful place. People are advised to keep their cellphones on vibrate/silent mode. In case the call is urgent, then please take the call outside the temple.

People are advised to dress appropriately and cover their heads when entering Gurudwara. You may carry handkerchiefs or dupatta to cover your head. In case you are not carrying one, you need not worry as you will find provisions for head gear inside Golden Temple.

We sat at the side of holy water watching the temple and enjoying the peace. It was almost 1:30 am (late after midnight) that we realized we should take some rest. We went to our OYO room and slept.

We woke up early in the morning, to watch the sunrise over Golden Temple. The majestic view when the rays fall on the walls of the temple is indeed worth it. After having tea, served at Golden Temple we left for Jallianwala Bagh. 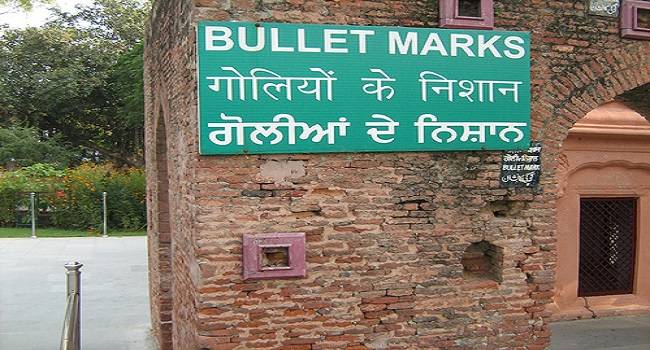 Bullet Marks appearing on a wall in Jallianwala Bagh

On our way to Jallianwala Bagh, we had delicious mouth-watering Parathas at Bhai Kulwant Sigh Kulche. We four friends competed on who can finish the arm length glass full of Lassi first. After breakfast, we headed to Jallianwala Bagh.

It is located at a walking distance to Temple. Jallianwala Bagh holds within itself the cries of 1,000s of Sikhs who were trapped and killed on the holy day of Sikhs (13th April 1919) by the British Empire (then ruling India). People can still see the wall with bullet holes in it. 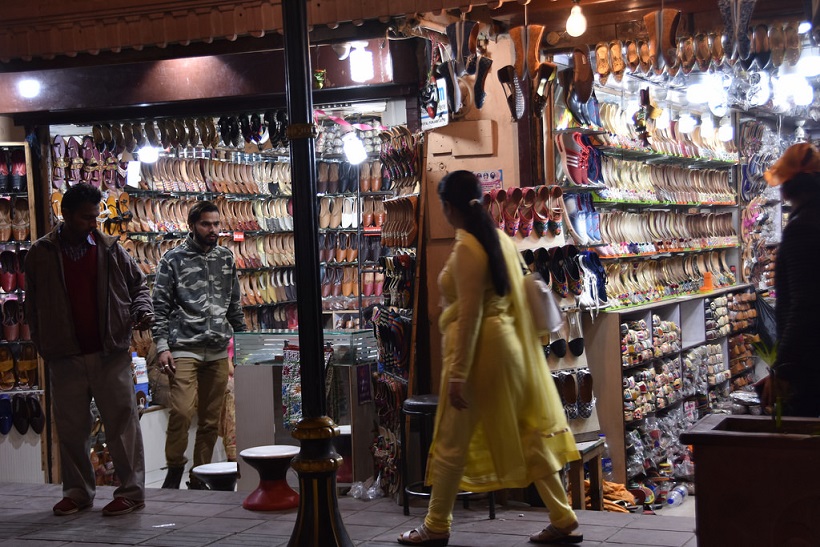 We still had time before we leave for Delhi, so we planned to go on a shopping spree in the local markets of Amritsar. Whats better than giving oneself a typical localite look. We bought Patialas (for Females) and Pathani (for Male) complimented by Juti (footwear).

After giving our stomach a delightful treat of Chole Bhature from a restaurant at Lawrence road, we left for Delhi around 3 pm.

On our way, we halted at Kesar da Dhaba for dinner and to enjoy the last bit of Punjab for dinner. We reached Delhi by 1 am in the night, after several halts due to the traffic and ended our 2-day trip to Amritsar. 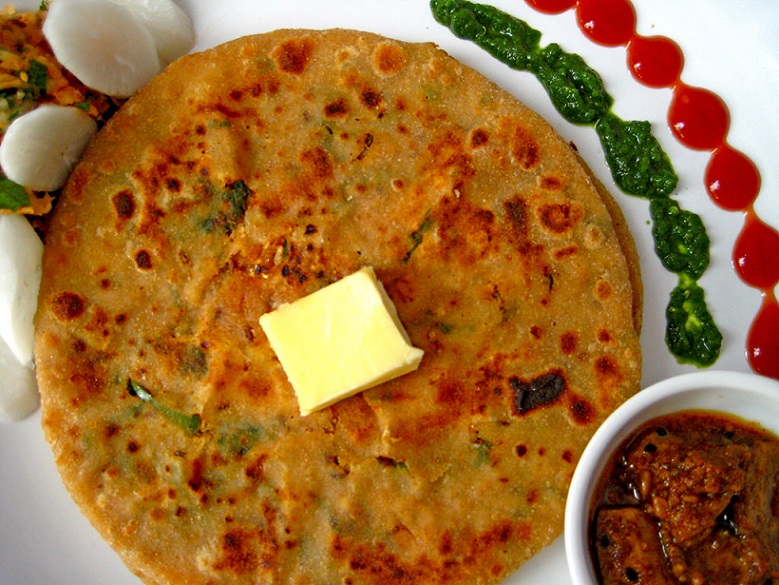 Last taste of Punjab. Mooli paratha with butter on top and chutney, salad, achaar on the side./ CC Soniya Goyal

Read Next: 5 Tips For First-Time Visitors To India

This blog post is written by Vishakha, a finance girl by profession and a traveler by heart. You may also get in touch with her through her personal blog at https://vishakhajalan.wordpress.com/