Madhya Pradesh is a state in the northern plains of India. The name Madhya Pradesh or “M.P.” for short means “the central region”, due to its geographical position.

It is one of the few states of India that is completely surrounded by other states. Therefore, ahem, no ocean or sandy beaches. But, Madhya Pradesh has a rich feast for those who seek prehistoric paintings, religious erotica, ancient forts, and tribal culture.

To its north is Uttar Pradesh, to its west lie Rajasthan and Gujarat, to its south is Maharashtra, and to its east is Chhattisgarh.

Unfortunately, Madhya Pradesh has been rather neglected as a travel destination and one reason for that could be its undeveloped and underdeveloped tourist infrastructure. 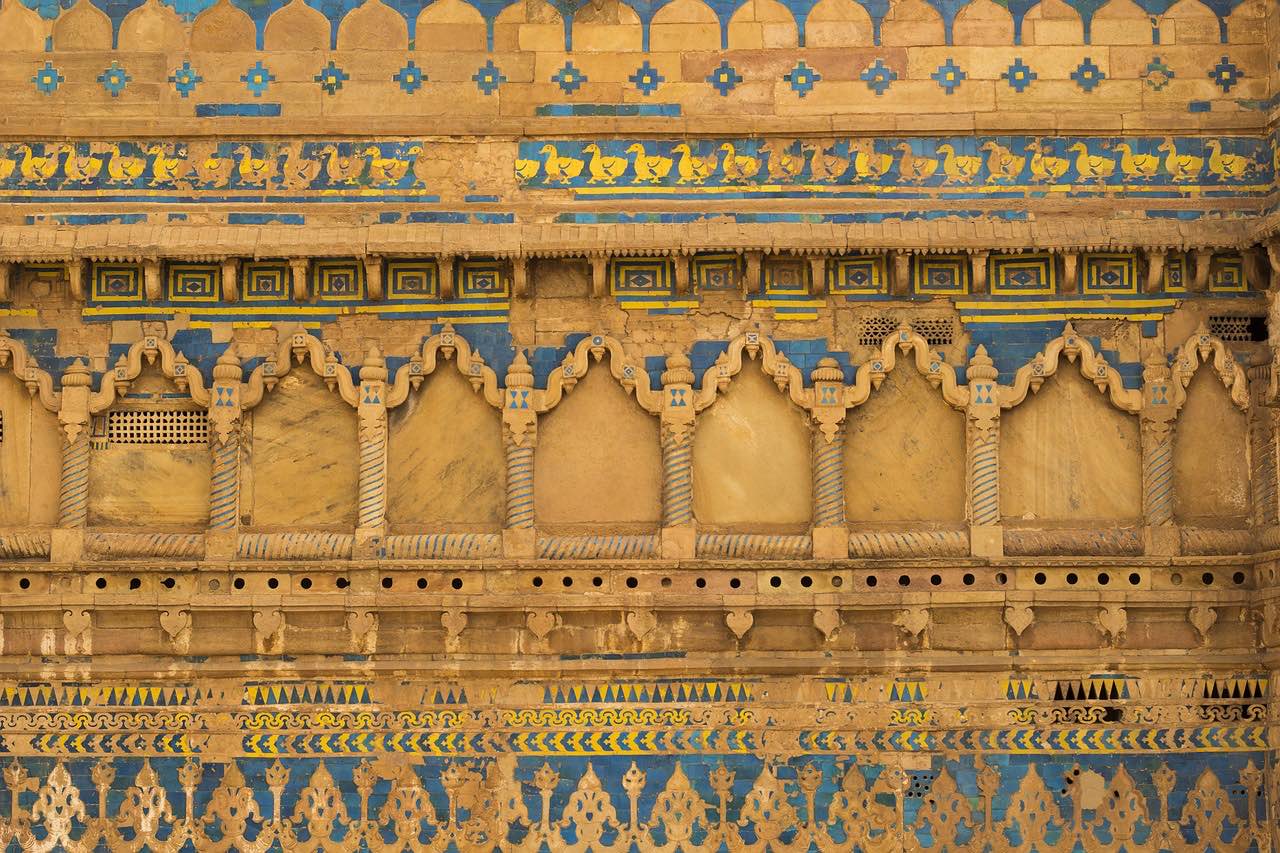 Photo: Walls of Gwalior Fort / The Art of Travel Partners

Madhya Pradesh has many large tribes. Several tribal groups inhabit the Vindhya mountain range areas of the state. Moreover, the state is also well known for its handicrafts.

Madhya Pradesh has 9 other major cities in addition to its capital city Bhopal. These notable cities are:

Things To Do In Madhya Pradesh

Fun Facts: In the ancient times Vairisimha II was the king and the capital was Ujjain. When King Bhoj became king, he moved the capital to Dhar. During the independence war, the Dhar Fort played an important part in the fight for freedom and produced many freedom fighters. 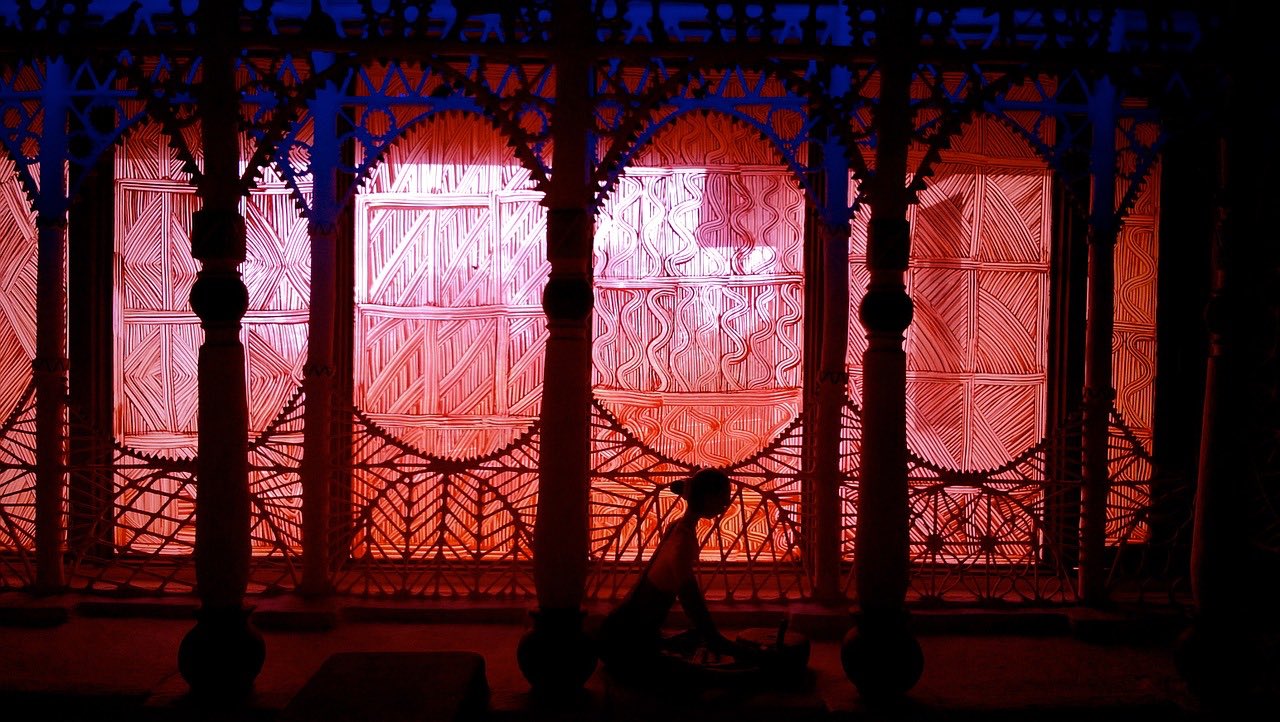 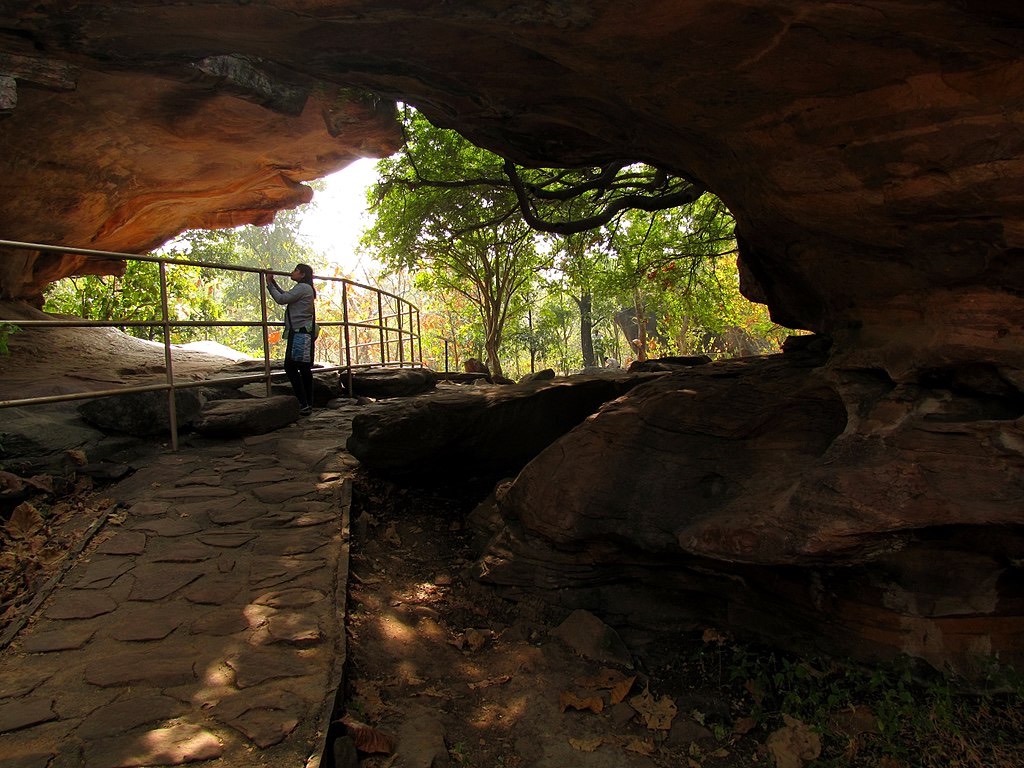 Photo by solarisgirl CC BY SA 2.0

The Bhimbetka rock shelters are an archaeological site in central India that spans the prehistoric Paleolithic and Mesolithic periods, as well as the historic period. It exhibits the earliest traces of human life on the Indian subcontinent and evidence of Stone Age starting at the site in Acheulian times.

It is located about 45 km (28 mi) southeast of Bhopal. It is a UNESCO world heritage site that consists of seven hills and over 750 rock shelters distributed over 10 km (6.2 mi).

The rock shelters and caves provide evidence of a “rare glimpse” into human settlement and cultural evolution from hunter-gatherers, to agriculture, and expressions of spirituality.

Some of the Bhimbetka rock shelters feature prehistoric cave paintings and the earliest are about 30,000 years old. These cave paintings show themes such as animals, early evidence of dance and hunting.

The Bhimbetka site has the oldest known rock art in the Indian subcontinent, as well as is one of the largest prehistoric complexes.

Orchha is a small town in Madhya Pradesh near the banks of Betwa river. The medieval city of Orchha seems to have frozen in time, its palaces and temples still retaining their original grandeur. The word Orchha means ‘hidden’. 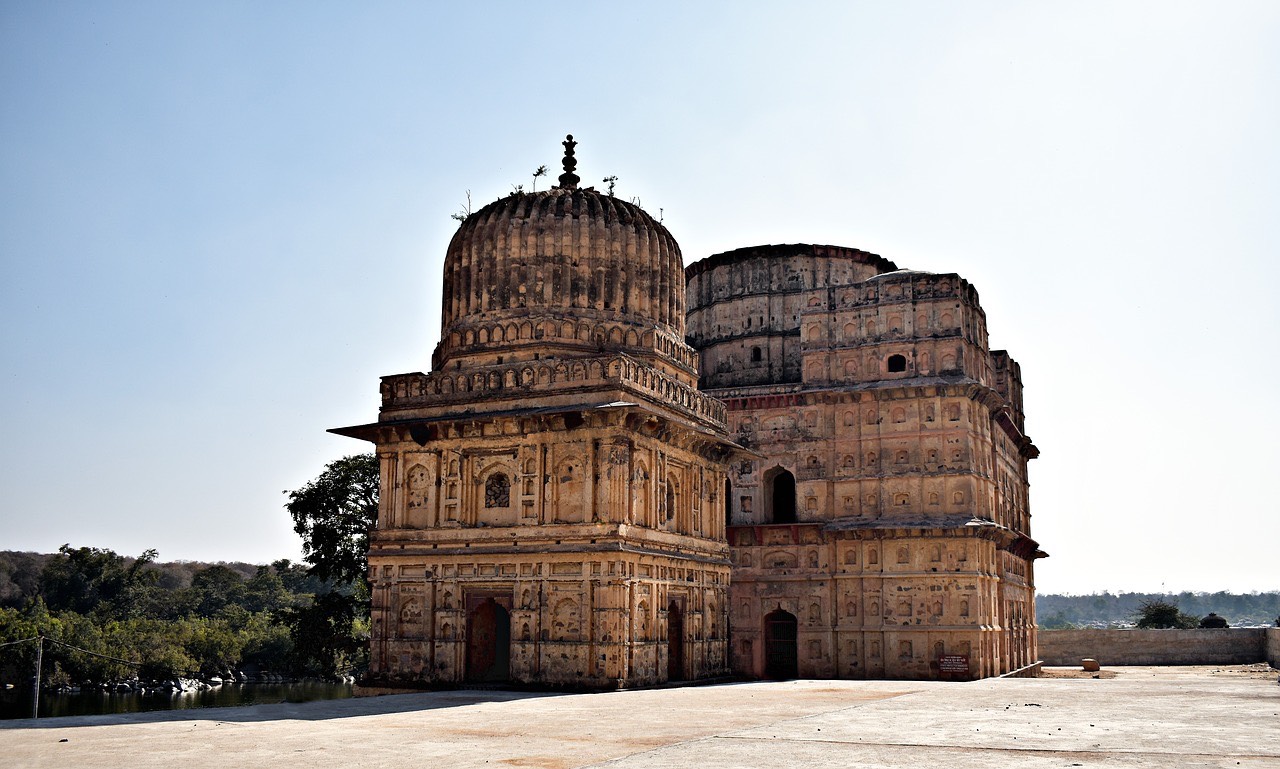 Photo: Orchha, frozen in time / The Art of Travel Partners

There are 14 Chhatris or Memorials to the rulers of Orchha, grouped along the Kanchan Ghat of the river Betwa on the south end of town. You can climb up to the roof for views of the river.

The fort complex is a great place to visit in Orchha. It consists of: 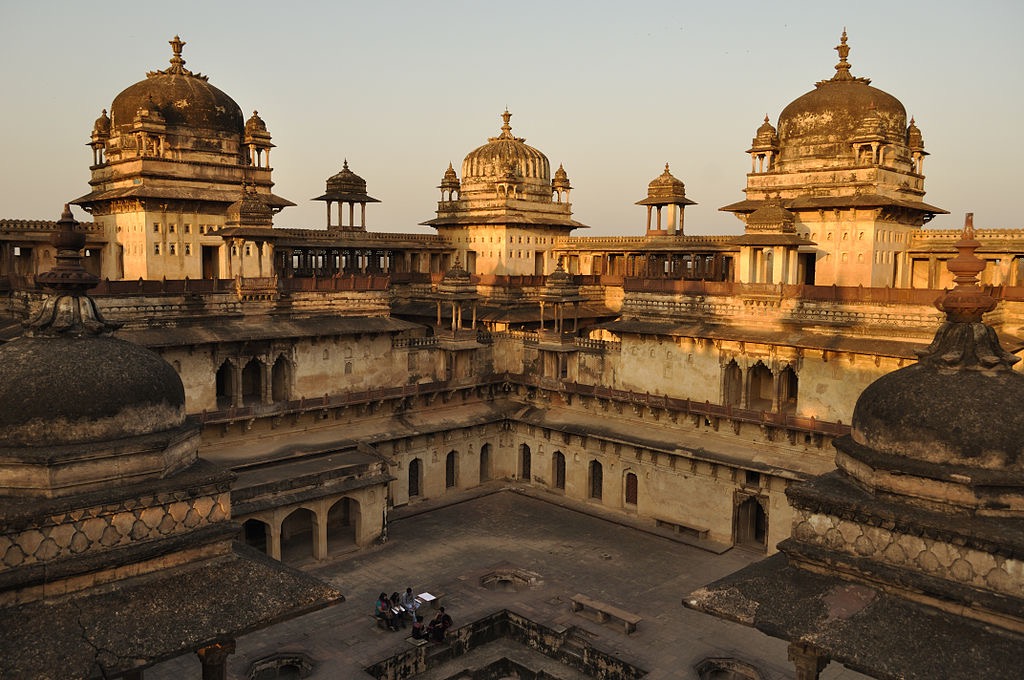 Built upon a massive stone platform and reached by a steep flight of steps, the temple was specially constructed to enshrine the image of Rama that remained in the Ram Raja Temple. 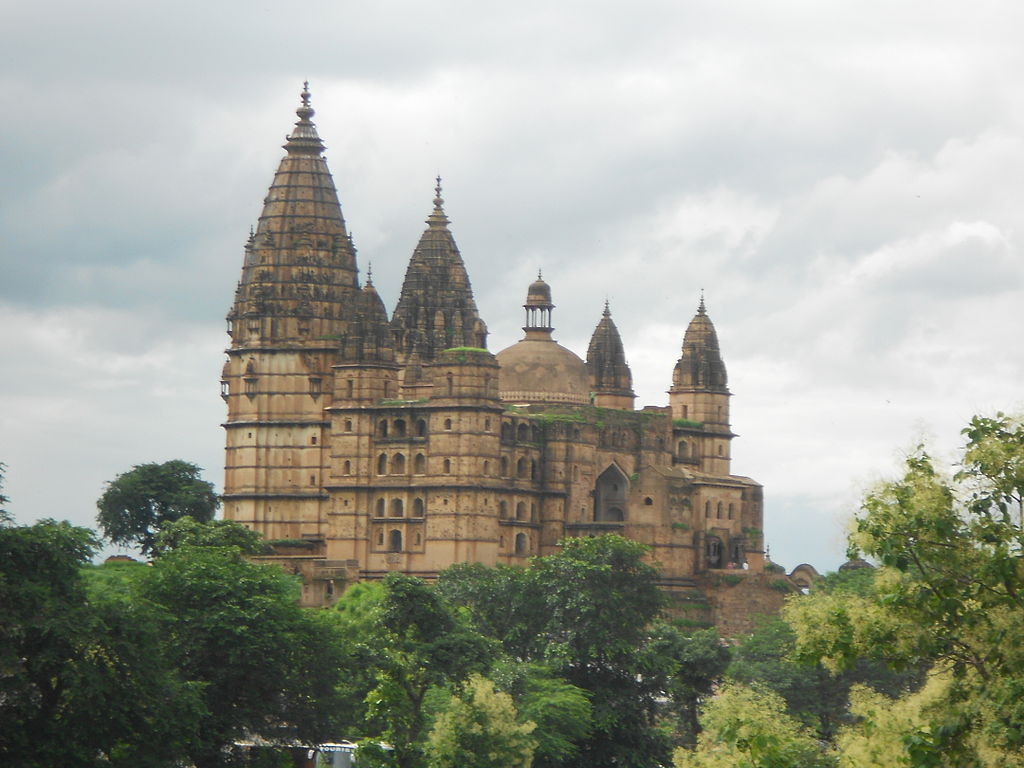 Lotus emblems and other symbols of religious significance provide the delicate exterior ornamentation. Within, the sanctum is chastely plain with high, vaulted walls emphasizing its deep sanctity. Find the hidden stairs to the roof for a view of the entire area.

How to get to Orchha

You can take a train to Jhansi from Agra or Delhi or Gwalior. Afterward, hire a car or auto-rickshaw to Orchha which is just 15 km away. Also, please note that you can cover Orchha while traveling between Jhansi from Khajuraho, as a detour.

For a detailed list of things to do, please read Khajuraho Travel Guide.

Hindi is the main language used. English knowledge can sometimes be found in the cities. Do not expect anyone to speak English outside the main cities.

As elsewhere in Central India, you can have the delicacies of regional cuisines from all over India in Madhya Pradesh. Besides, local Central Indian cuisine (Malwi food) is delicious: local Poha, and Daal Baflae of certain places such as Ujjain, Indore, and Ratlam are delicious.

The street food of Indore is renowned, with shops that have been active for generations, famous for Butta Kees and even Sabudana Khichdi available around the clock.

Bhopal is known for meat and fish dishes, such as rogan josh, korma, keema, biryani, pilaf, and kebabs. There is a street named “Chatori Gali” in old Bhopal where one can find traditional Muslim non-veg fare such as Paya soup, Bun Kabab, Nalli-Nihari and other local specialties.

Gwalior is famous for chaat named as Bedmi (dal stuffed suji puri with aloo ki teekhi sabji), a favorite morning breakfast of gwaliorites, and also a famous sweet named Gajak (from Morena), famous in the winter season, made up of Sesame and Jaggery, said to be very good for health also.

Dal bafla is a common meal in the region, consisting of a steamed and grilled wheat cake dunked in rich ghee which is eaten with daal and ladoos. The culinary specialty of the Malwa region of central Madhya Pradesh is poha (flattened rice); usually eaten at breakfast with jalebi.

By plane
Raja Bhoj Airport. Raja Bhoj Airport’s new terminal comprises two separate sections for domestic and international flights. The terminal is equipped with all the latest facilities and boasts of a passenger lounge having a seating capacity for 750 people. Apart from that separate entry and exit points have been made for national and international flights. A 1,500-capacity car park is outside the airport. Air India and Jet Airways operate services linking Bhopal with New Delhi, Ahmedabad, Hyderabad, Indore,Chennai, Kolkata/Calcutta and Mumbai.

By train
Bhopal is very well connected by rail and is a major hub and exchange railway station for the Central and Western Railway networks. Bhopal has two main railway stations – Bhopal Railway Station in old Bhopal or Habibgunj Railway Station in New Bhopal. Shatabdi express running between Delhi and Bhopal provides an excellent and convenient means to get here. Apart from this, regular multiple trains connect Bhopal to all the major metros in India.

By car –
Bhopal and Indore is well connected to the major metros in India through many national highways.

Bhopal has a decent public transportation system comprising of buses, mini-buses, three-wheeled autos and the odd-looking tempos that are a major pollution concern for this growing city.

Photo: A common sighting in India / The Art of Travel Partners

It is also fairly easy to book a taxi for a full day to get in and around the city for reasonable rates. Usually, any hotel you choose to stay in will help you get transportation according to your needs. If it’s your first visit to Bhopal, the safest thing to do is book a taxi rather than try the colorful public transportation system in Bhopal.

Recently, a private firm has plied a number of full-sized buses called Star-bus in the city streets which are quite safe and fun to travel in. These have started to gain popularity and are increasing in number.

You can also travel between the cities and various attraction sites by buses or renting a private car.