Things To Do In Khajuraho

These sculptures representing the Indo-Aryan architecture, congeal in stone a lyrical paean to love and passion and reflect the Chandela dynasty’s passion and immense appreciation for the forbidden art, paradoxically, in the land of Kama Sutra. 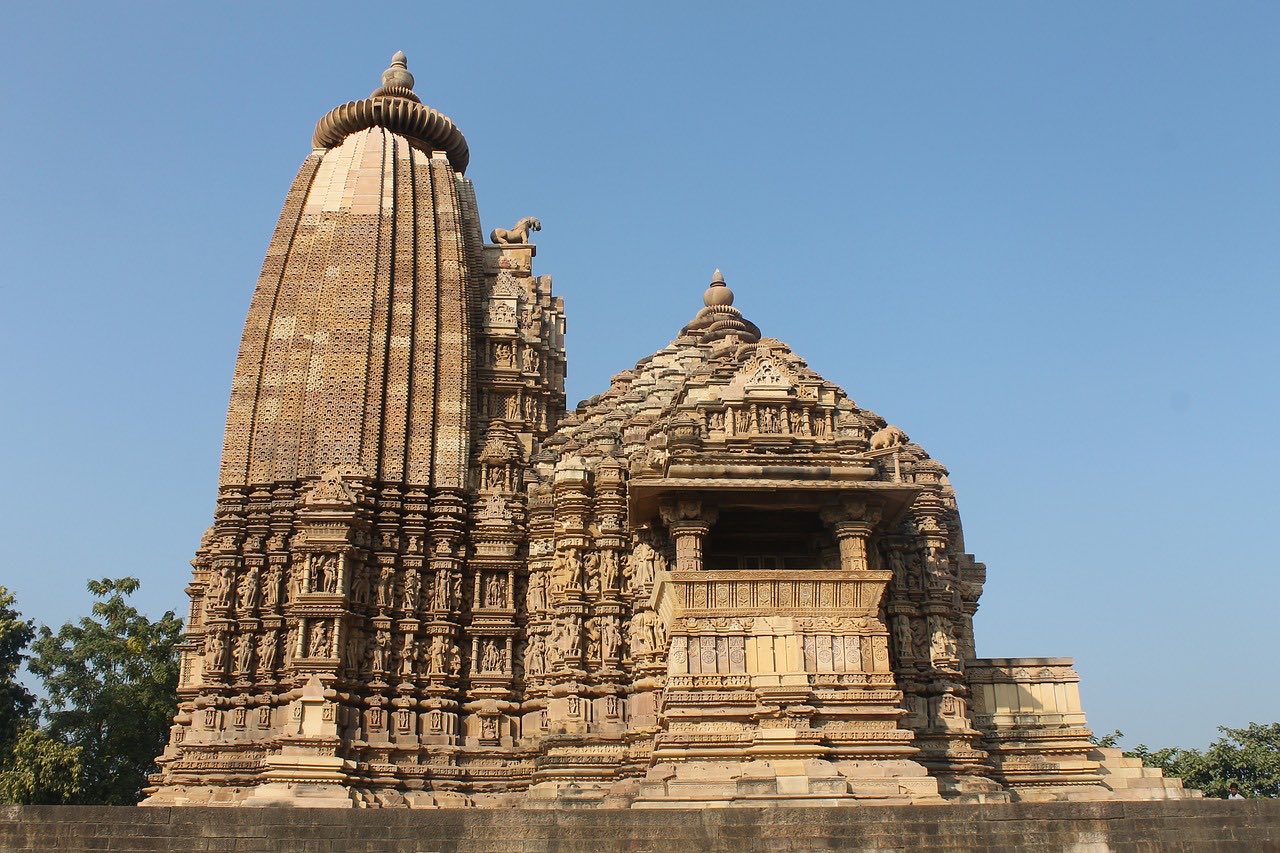 The temples of Khajuraho were built between 950 to 1050 A.D. during the Chandela dynasty of Central India.

After the decline of the Chandela dynasty in 13th century, the temples were left under the cover of dense date palm trees for many years, which gave the city of Khajuraho its name, Khajur in Hindi means “date”. In the ancient times, it was known as Vatsa.

In 1838, a British army engineer, Captain T.S. Burt rediscovered them. By that time only 22 of the original 85 temples had survived.

In every temple, there is the depiction of royalty, armies, wrestling, kinship, war, courtship, marriage, lovemaking, music and dancing, spiritual teachings, union, meditation, bliss, gods, goddesses, plants, animals and an abundance of all human forms. 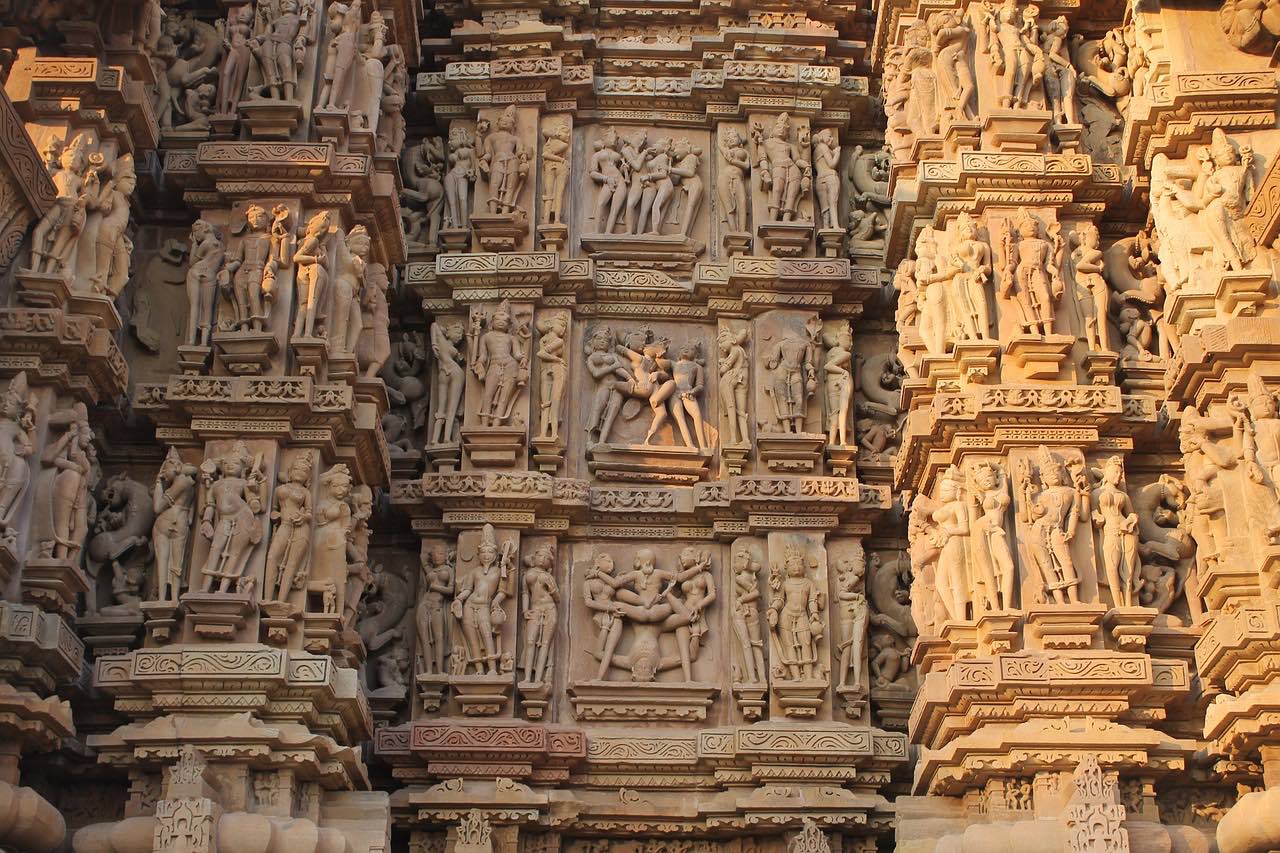 Photo: Kama Sutra, the art of passion and lovemaking / The Art of Travel Partners

All the temples are open from sunrise to sunset. These are the richest and largest of all temple groups.

Note: There is a small entry fee to enter the Western Group of temples. If you have a ticket from Taj Mahal, you can use it to enter here again.

Photo: Temples of Khajuraho / The Art of Travel Partners

The Annual Dance Festival of Khajuraho happens in the first week of February. Light and Sound Show at Western group of temples. After visiting the temple complex is over, the sound and light show, narrated by the Bollywood icon Amitabh Bachhan, is held every evening.

It is a small museum located exactly opposite to Shiv Sagar and nearby to Hotel Lakeside. The museum is a must place to visit as it features a varied selection of unique carvings from the area. Note, that photography is strictly prohibited in the museum.

Iron, brass and stone sculptures depicting Kama Sutra poses are a specialty of Khajuraho and are available at the handicraft stores in the town.

Khajuraho’s climate is quite extreme, with wide variation in day and night temperatures along with minimal rainfall. Summers are hot at 45°C and winters are extremely pleasant at 27°C. Rainfall of 14 cms is observed annually. As summer is too hot, winter is a good time to visit Khajuraho. During month of March, the annual Dance Festival takes place. So from September to March is the best time to visit Khajuraho.

Though Hindi is spoken widely here, communicating in English should not be a problem for the tourists. Dutch, French, German and some other foreign languages are also spoken by tourist guides and at the restaurants/hotels.

By train – A train station was finally opened in Khajuraho in 2008, linking it to Jhansi (Uttar Pradesh) (175km) on the Delhi-Chennai/Bangalore/ Trivandrum mainline. NOTE: You can not buy train tickets at the Khajuraho train station! You must go to the BUS station, about 1km walk out of town, to buy train tickets (much cheaper than buying tickets through your hotel).

The other options to reach Khajuraho are through Jhansi. It takes around 6 hours to reach Jhansi from Delhi by train, and another 3-4 hour (plus connecting time) to go to Khajuraho. Get the Dakshin Express from Delhi (22:50 hrs) and reach Jhansi by 05:00 hrs, connecting to the Jhansi-Khajuraho Link Passenger(Train No:51821) which now runs along with Jhansi-Allahabad Passenger(Train No:51821) starts from Jhansi at 7:10 AM and reaches Khajuraho at 12:05 PM. Another option is the Bhopal Shatabdi train from Delhi (6.00) to Jhansi. Train from Khajuraho to Jhansi departs from Khajuraho at 12:25 PM and will reach Jansi by 5:30 PM. Both the trains have stoppage at Orcha.

An alternative station is Satna (Madhya Pradesh) (117km) on the Allahabad-Mumbai mainline. Another option is Mahoba station on the Varanasi- Jhansi Route. Alight at Mahoba and catch the 11 AM Passenger(Train No:229A) to Khajuraho.

By taxi/bus – Satna and Jhansi both are connected to Khajuraho by regular bus service. It takes around 3 hours to reach Khajuraho from Satna or Jhansi by taxi, and 5-6 hours by bus. There are daily bus services with Satna, Jhansi, Harpalpur, Chhatarpur, Mahoba, Sagar, Jabalpur, Bhopal, Indore, Gwalior, Panna, Agra, Allahabad, and Varanasi.

From Jhansi railway station catch a rickshaw to Jhansi bus station which is 5 km away. It is very difficult to get a bus to Khajuraho from Jhansi after 5 PM. So try to reach Jhansi by afternoon if you want to catch a bus to Khajuraho from Jhansi. Khajuraho to Bandhavgarh (225km, 5hrs), Satna (117km, 4hrs), Harpalpur (94km), Jhansi (172km)and Mahoba (61km). Khajuraho is located 600km (11hrs journey) south-east of Delhi. There are bus services from Agra (12 hrs), Gwalior (9hrs) and Jhansi.

Taxis are recommended because the condition of buses and roads are not good, and the ride is grueling. If you are traveling in your own car and if you are a novice driver, then the chances of meeting with an accident are significantly high.

Khajuraho is one of the cities nicely connected by private and public buses. Private tour service operators can arrange Non AC or deluxe AC buses for passengers from the main bus stations within the city.

A good way to get around and see the temples, as well as the village life in Kharujaho, is by bicycle, which you can easily rent in the bike shops near the main temple complex. Cycle rickshaw is also another cheap alternative to travel around.

Taxis and auto-rickshaws can be used to travel to and from the airport.

Always listen to the travel alerts and frequent warnings, as some areas in Khajuraho are considered extremely unsafe for foreign travelers.

Beware of the fake school teachers, principals, and students who are too much interested in your dollars as donation, which hardly goes to the school itself. If you really want to donate someone, just check their authenticity or else your charity will go in vain.

Put a sticky note with your passport having a local telephone number of your close family member or travel consultant.

For women, if traveling alone then try to get accommodate near other women travelers.