Lithuania is located in the northern-eastern region in Europe. The Baltic Sea washes it making it one of the three Baltic States. It borders Latvia, Belarus, Poland, and Kaliningrad Oblast of Russia.

Despite its small size, Lithuania has a lot to offer to its visitors, so don’t miss a chance to see this fabulous country! The capital city of Lithuania is Vilnius and the official language is Lithuanian.

Lithuania attracts many tourists from neighboring countries, as well as from all over the world. You won’t regret it!

Things To Do In Lithuania

Lithuania is one of the smallest countries in Europe. However, it doesn’t mean you won’t find interesting places to see there.

Major cities include Vilnius, the capital of the country, Kaunas, a former capital and a main competitor of Vilnius for the name of the major tourist destination, and Klaipeda, a seaport with a beautiful old town area and historical heritage.

Kedainiai is a city with beautiful examples of Renaissance architecture, and Palanga is the summer capital of the state, with numerous resorts and sandy beaches.

Vilnius Old Town is not only on the World Heritage Sites list but is also the largest old town in Eastern Europe.

Also, don’t forget to visit Trakai, a small town within 17 miles of Vilnius, with marvelous sceneries, an ancient castle, unique architecture, and cuisine.

Vilnius is the capital and the biggest city of Lithuania, which dates back to the 13th century. There are a lot of interesting spots in the city, which you should put on your itinerary. The most recognizable site of Vilnius, which you will probably see on all the postcards and posters, is Gediminas Castle.

It was built around 1230. Nowadays, its main tower is a symbol of both Vilnius and Lithuania.

The Bastion of Vilnius defensive wall is a very picturesque place in the Old Town. It keeps plenty of secrets in its rocks and the ambivalent atmosphere will keep you intrigued for a long time. 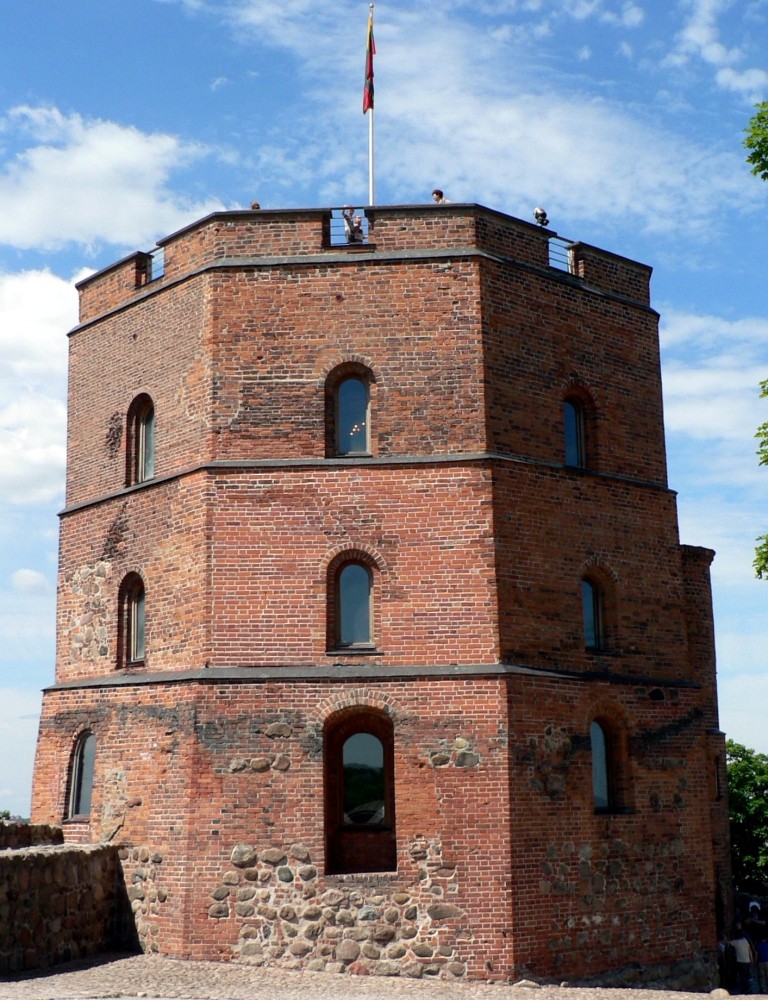 Vilnius Cathedral is also one of the most important sites in Vilnius. It keeps a lot of secrets in its catacombs and attracts numerous visitors by its magnificent architecture.

The Gate of Dawn is one of the greatest highlights of the city. It is a miraculous and highly religious place, which attracts visitors from all over the world. Another highly visited church in Vilnius is St. Anne’s Church.

It will most totally leave a huge impression on you, as well as it did on Napoleon Bonaparte. The legend says French Emperor wanted to take this church to Paris in the palm of his own hand.

Another place you must visit in the Old Town is the famous Vilnius University, which is not only the oldest university in the country, but also one of the oldest in Europe. It’s got both interesting history and marvelous appearance, as well as high quality of education.

If you want to combine a dinner and a great panoramic view, visit Vilnius TV Tower, the highest building in Lithuania. The National Museum of Lithuania is one of the oldest and most important museums in the country. It contains thousands of different exhibits and hosts 250 thousand visitors annually.

And if you want to spend some quality time in the open air, don’t miss the Park of Europe. If you visit this place, you will find out that European art can be extremely original. 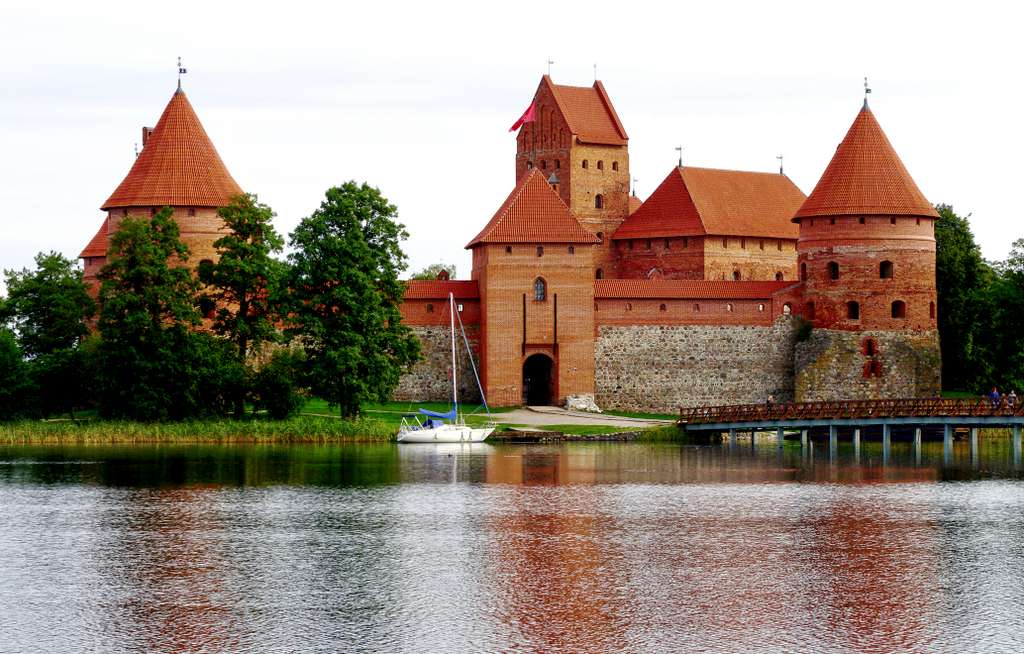 Trakai is a fascinating city in the lake region of Lithuania, just in an hour ride by bus from Vilnius. Due to its proximity to the capital, it is a very popular tourist destination.

Trakai was built and preserved by people of different nationalities, such as Lithuanians, Russians, Jews, Poles, Tatars, and, most importantly, Karaims, the original ethnos of the area.

Their traditional dish, Kibinai, is one of the most popular attractions of the town. It is a local specialty, cooked with meat, mushrooms, vegetables, chocolate, cheese, and many other fillings.

Kaunas is the second-largest city in Lithuania and the biggest competitor of Vilnius for the name of the main tourist destination in the country. Its Castle is the oldest stone castle in Lithuania, which dates back to the 14th century.

At present, it hosts one of the branches of the Kaunas City Museum and numerous cultural events annually. Some time ago, the castle served as a prison, and the legend says it is still haunted by prisoners’ spirits, which have not found their peace.

Also, the Santaka Park, situated next to Kaunas Castle, where you can see many interesting places, is often called the heart of Kaunas. 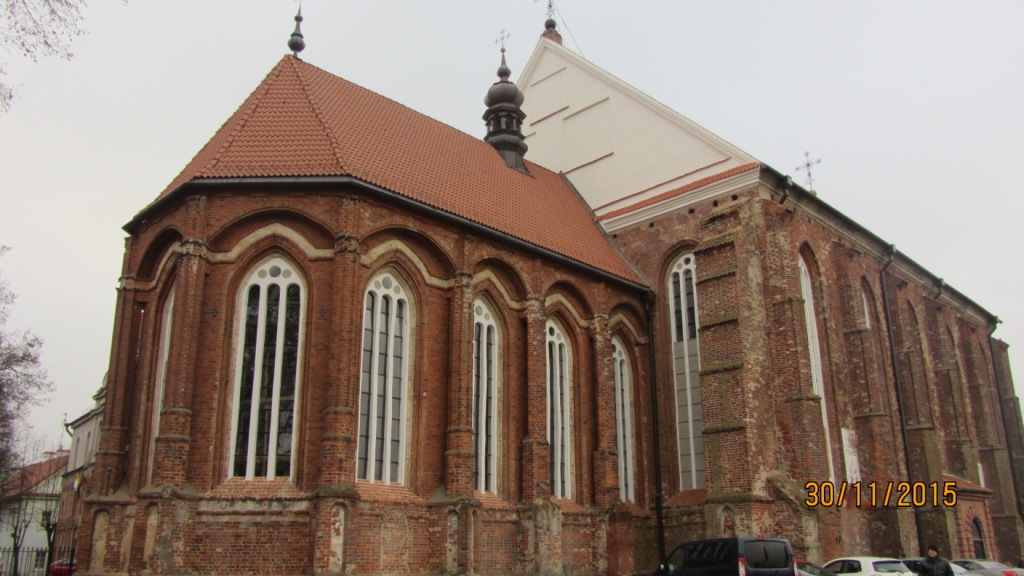 The city is rich in cathedrals and basilicas. For example, Kaunas Parochial Archcathedral Basilica of St. Peter and Paul is the only church in the Gothic style of basilica design and the biggest building of Gothic sacral type in Lithuania.

The Chapel of the Blessed Sacrament is particularly unique. It looks like a small church in the church and decorates the Cathedral with its wooden interior. And monumental Christ’s Resurrection Basilica is the biggest basilica-type church in the Baltic area.

Its tower is 70 meters high and visitors can go to the observation deck on the church roof and enjoy the panoramic view of the city.

You can reach Christ’s Resurrection Basilica from the New Town by funicular, uncommon now, but still very curious kind of transportation. It’s been operating since 1935, and Kaunas is the only city in Lithuania, which still has a funicular in use. It will take you to the panoramic viewpoint, where you can admire the outstanding beauty of the city.

Two main streets, which you can’t miss by any means, are Kaunas Laisvės avenue and Vilnius Street. A walk through the two of these streets is obligatory. Here, you will find plenty of cafes, restaurants and souvenir shops with unique amber jewelry.

It is, in fact, one of the most popular souvenirs, which you can bring from Lithuania. And it’s not that expensive too. For example, I got myself a cute silver ring with a small piece of amber for just 10 Euro, and it is a great memory from the trip to the Baltics.

MEGA shopping and leisure center is also a popular destination for shopping enthusiasts. But it is not only popular by shopping opportunities, but also by its marine aquarium, which is 10 meters high, 4 meters wide and 11 meters long, with a volume of 170 thousand liters.

It is one of the most spectacular sights of Lithuania. The aquarium contains 800 different tropical fish and six sharks.

Klaipeda is the oldest city in Lithuania and a popular Baltic Sea resort. Although its Old Town was highly destroyed during the Second World War, it is still worth a visit.

Don’t miss the gallery of modern Lithuania sculpture art in the open air. The Sculpture Park offers a snick into Klaipeda’s history of the 19th and the beginning of the 20th century. So, have a relaxing weekend in the shadow of trees and enjoy the art!

However, Klaipeda offers a lot for sculpture lovers even outside of the Sculpture Park. For example, you shouldn’t miss the Black Ghost Monument, situated near the castle remains.

The legend says, in 1595, one of Klaipeda Castle guards saw a ghost, who warned the guard that the city’s supplies of grain and timber will run out soon.

On the dock of the Danes River you will also spot a bronze sculpture of a girl, tiptoeing and sending a kiss to another sculpture of “Boy with a dog”. Isn’t it sweet? 🙂

Another object of attraction in Klaipeda’s Old Town is the granite sculpture “The cat with the face of a gentleman”. The legend says that “Old Town Cat” has a secret magical powers: it can leave its place, walk around and return, whenever it wants, just as a usual cat.

In fact, the sculpture disappeared twice, stolen by hooligans, but was rebuilt every time. Another cute animal sculpture is situated near the entrance to the jazz club “Kurpiai”.

There is a belief, if you whisper your biggest dream into a mouse’s ear and rub its nose, your wish will definitely come true!

The words on the bottom of the sculpture say: “Turn your thoughts into words – words will become a miracle”.

The official language is Lithuanian. The majority of the population can understand and speak Russian as well.

However, due to the difficult historical relations between the two countries, the Russian language is not so much in favor here.

The good news is that most young people nowadays know English (much better than a generation ago).

Taxis are easy to find in the cities. Also, the car hire is available from local and international firms. Cars drive on the right side of the road. Roads are generally in good condition.

Lithuania is rich in arts and culture. There was a vast amount of literature written in Latin here during the medieval age. There are also museums all around the country, which hold a variety of popular artwork.

There are various ethnic groups in the country. Lithuanians are the majority group. Poles are the largest minority.

Various religious places of worship around the country add to the beauty of the landscape. The architecture of the buildings in this country is simply mesmerizing. The main religion followed is Roman Catholicism, but all religions are present in the country.

Euro is the currency of Lithuania. The currency exchange is available at banks and bureaus de change. All major international credit cards are easily acceptable and ATMs are available widely in the cities.

In Lithuania, they use electric sockets of types C and F, as almost everywhere in Europe. The standard voltage is 230V.