Colombia is a large country in South America. It shares borders with Panama, Venezuela, Brazil, Ecuador, and Peru. The capital of the country is Bogota.

The country inhabits a large part of Amazon Rainforest. Therefore, it has a lot of biological diversity (actually, second most in the world).

Many tribes once lived here, including the Muisca, the Quimbaya, and the Tairona. Things changed when it became a Spanish Colony. Colombia declared its independence from Spain in 1810. 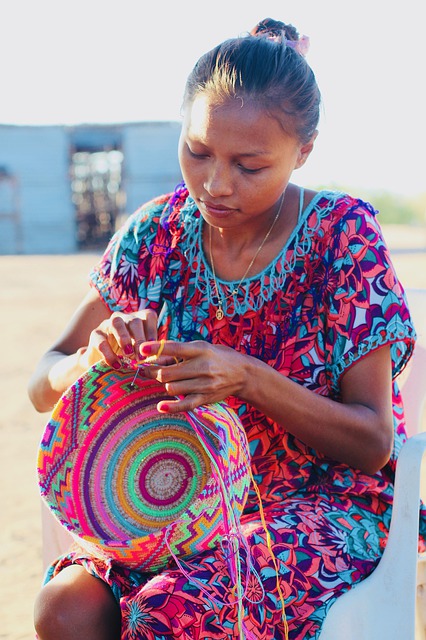 Tourism plays a significant part in Colombia’s economy. The country has many tourist attractions, some of which are on the UNESCO World Heritage Sites list.

Among major destinations for travelers, for example, are Bogota, Medellin, Cali, and Cartegena and its historic surroundings, Santa Marta, San Andres, Providencia y Santa Catalina, and others.

Note: Click on a “city hyperlink” to read the detailed travel guide for that particular city and the nearby attractions.

Things To Do In Colombia

Colombia has a very rich and diverse geography, including the Amazon, the Caribbean, and the Pacific coasts, the deserts of La Guajira, and the Andes Mountains. The coffee region is also a very popular tourist spot, particularly the city of Armenia and its surroundings.

Let’s start with a potential base city first: a city you’ll land into and then explore the surrounding areas. The following are the top cities you can fly into. 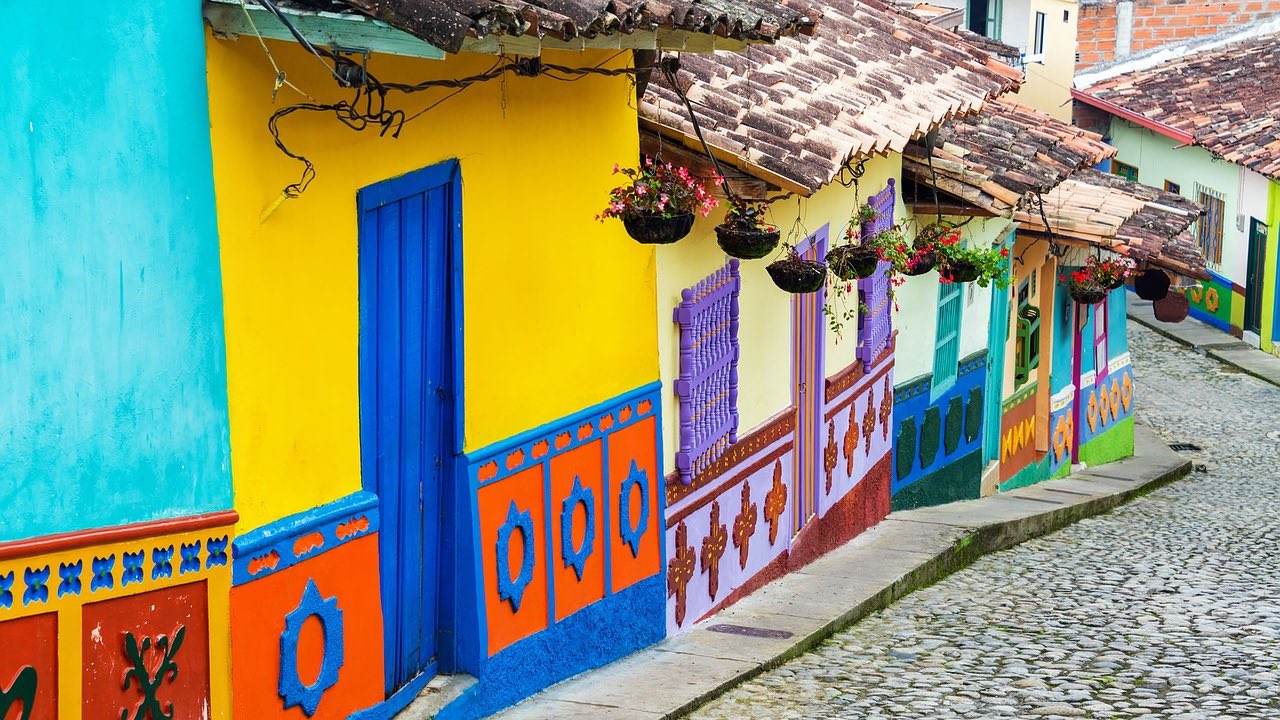 Bogota — the capital, a cosmopolitan city 3 km (two miles) high, with some eight million people sprawling outwards from Andean mountains, where you’ll find excellent museums, world-class dining, and most everything one wants from a big city. 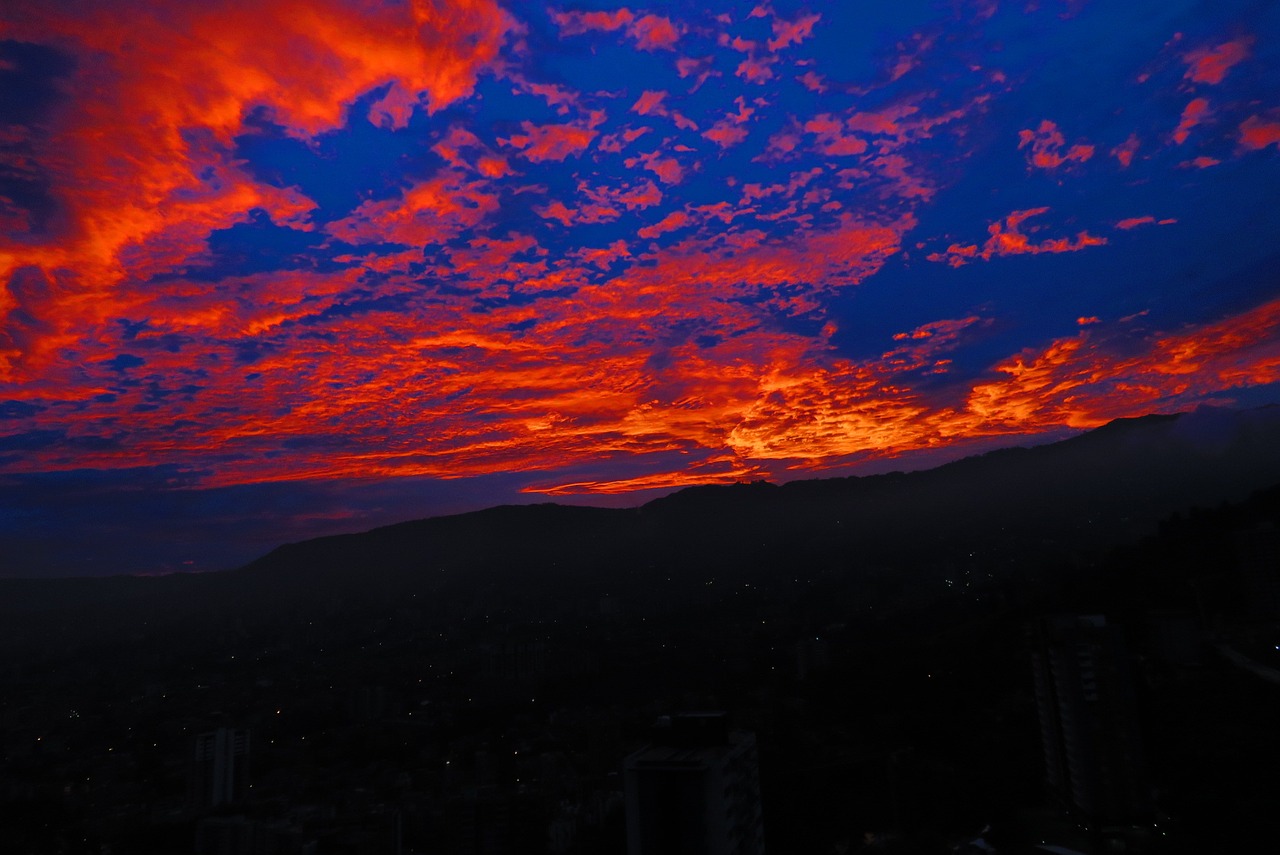 Medellin – the best weather year around

Medellin — the City of Eternal Spring and capital of the Antioquia department is famous for having a large textile industry, which produces top quality clothing that is sent all over the world. It’s also the birthplace of master painter Fernando Botero, so it houses the great majority of his works. 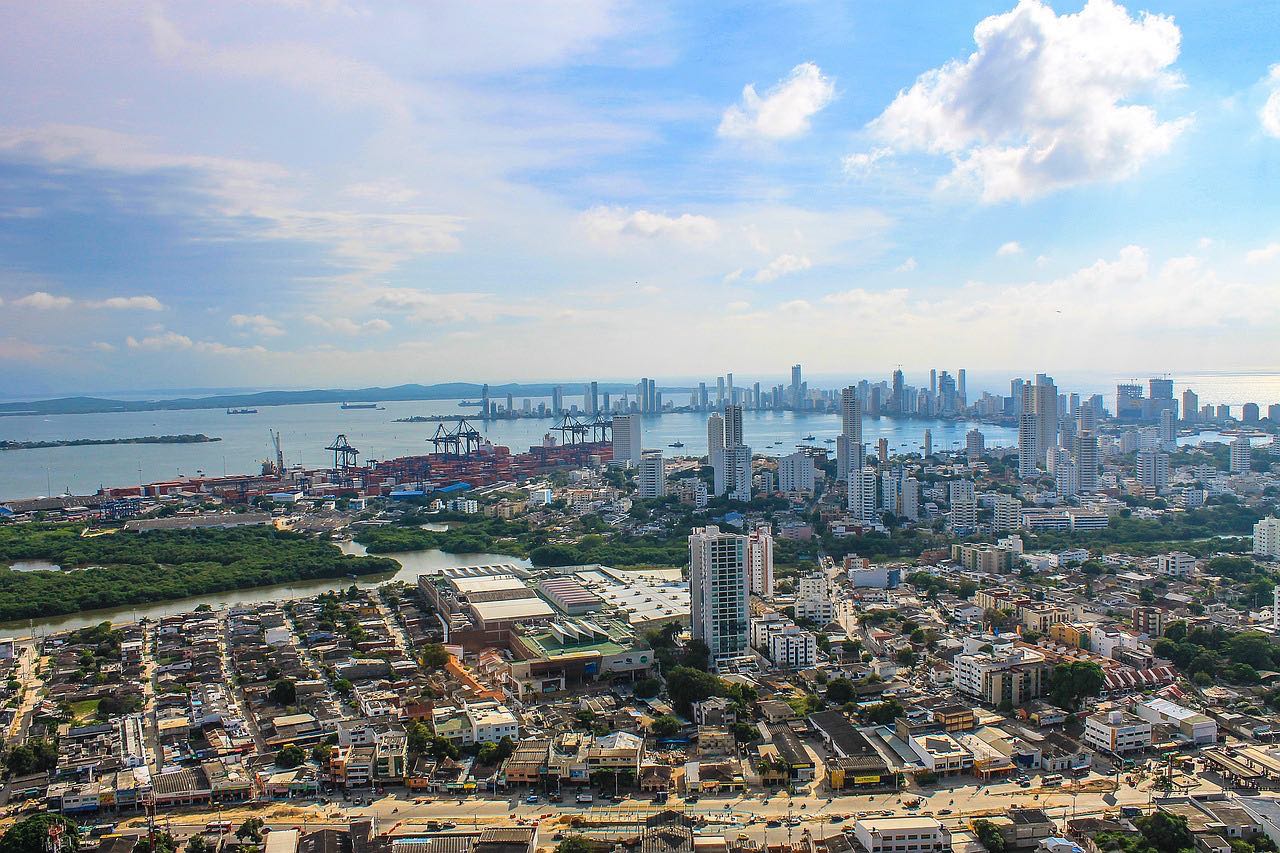 Cartagena – the port and the city

Cartagena — the Heroic City, Capital of the Bolívar department, is Colombia’s one of the most popular tourist city (along with the cruise ship vacationers). The colonial architecture and the skyscrapers can be seen together in this city that offers a unique experience of festivals, historic attractions, restaurants, and hotels. 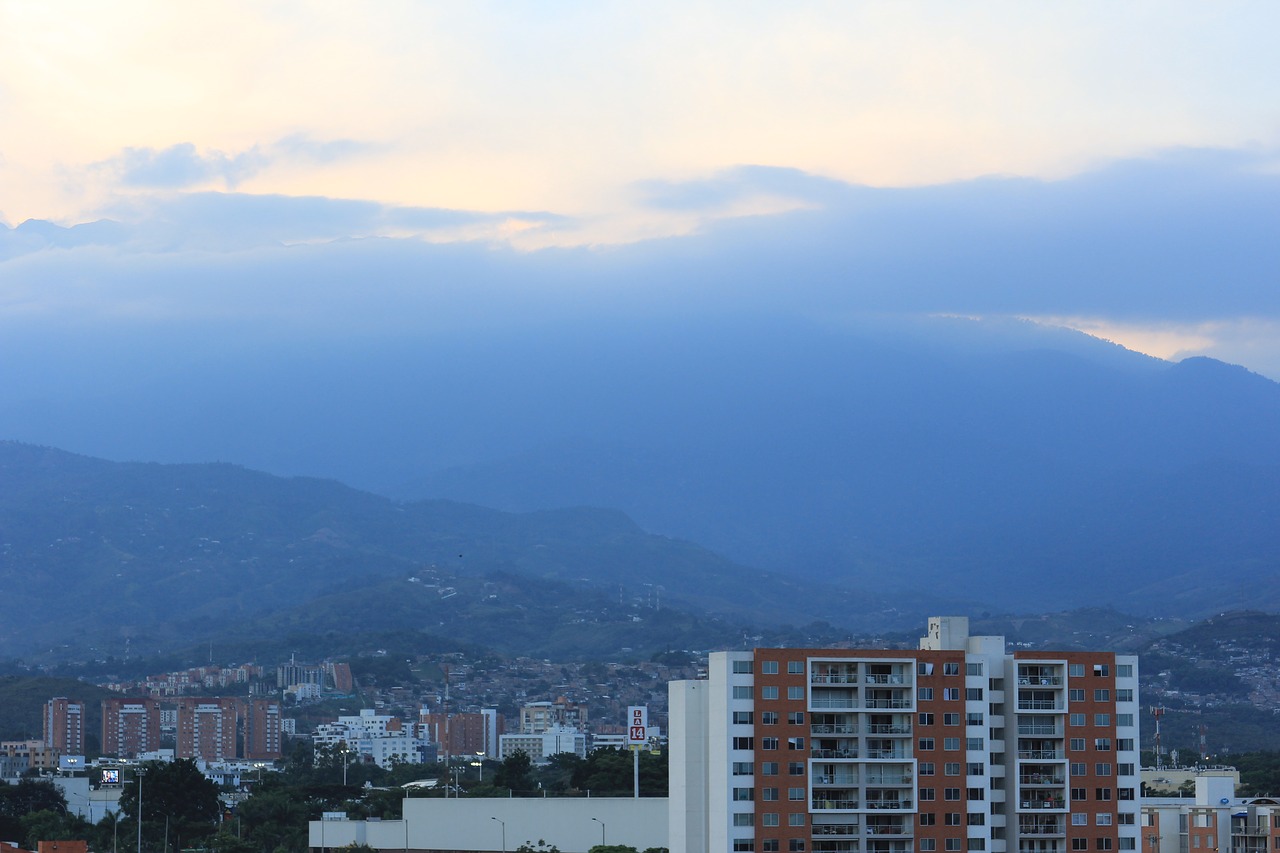 Cali – the salsa and sugarcane capital

Cali — Colombia’s third largest city, renowned as the salsa capital of Latin America and also for the sugarcane. 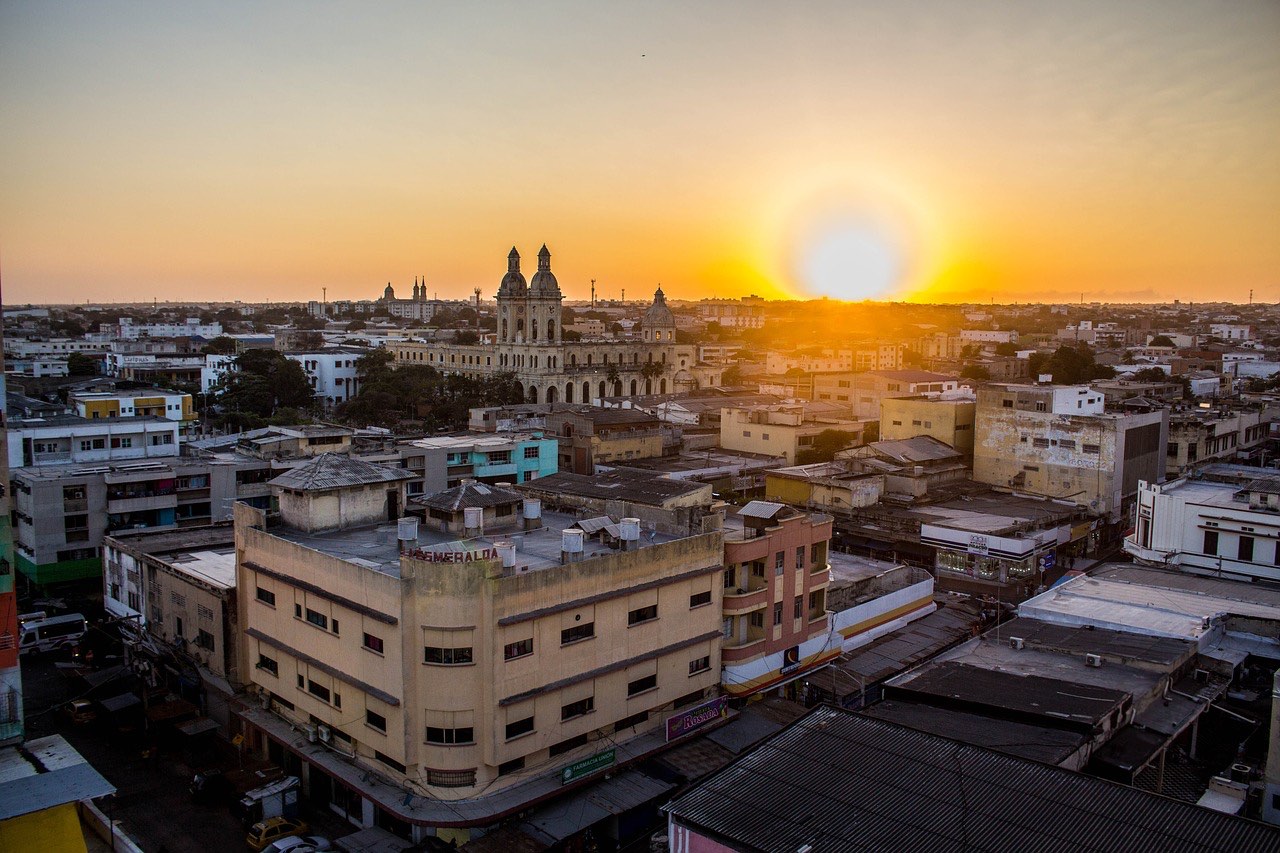 A golden sunset in Barranquilla

Barranquilla — the Gold Port and fourth largest city in the nation isn’t necessarily that exciting most of the year, but its carnival is the second biggest in the world after Rio de Janeiro’s, and is an amazing cultural experience and one heck of a party! 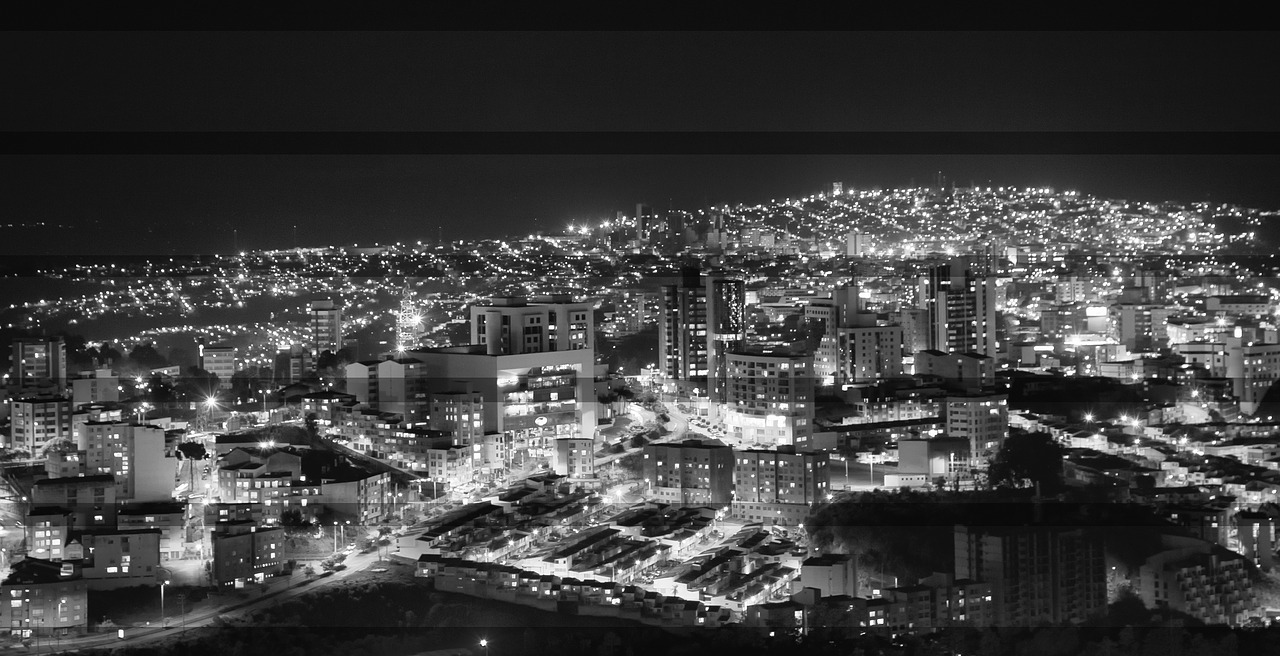 The Coffee Triangle of Colombia is made of Manizales, Pereira, Armenia, and Ibague. Among them, Manizales and Pereira is undoubtedly the center of the Zona Cafetera (coffee plantation experience) and offers the opportunity to visit “Los Nevados National Park” and “Nevado del Ruiz”

As you can see in the map below, you can fly to any of these towns from Bogota, Medellin, or Cali. 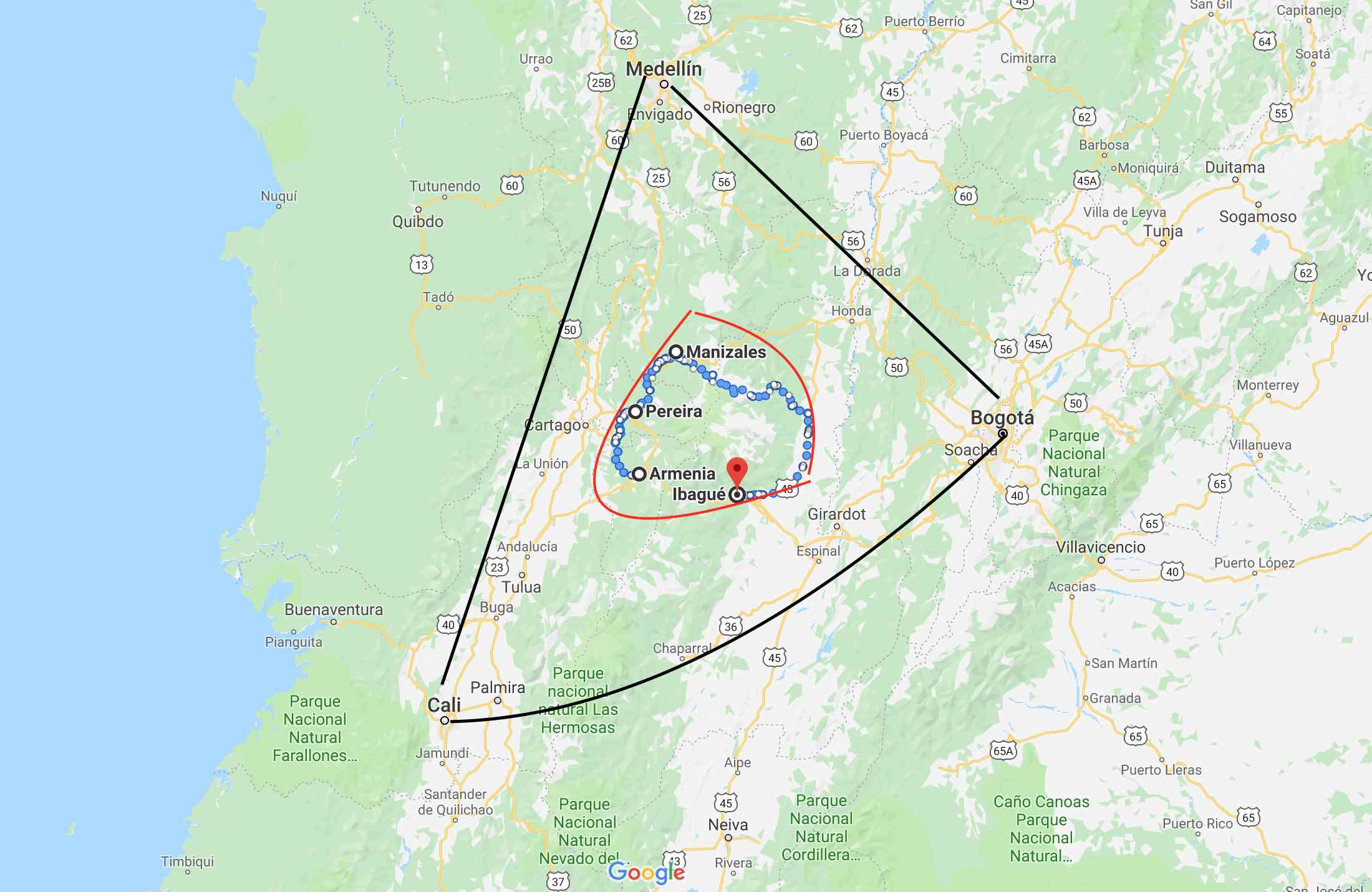 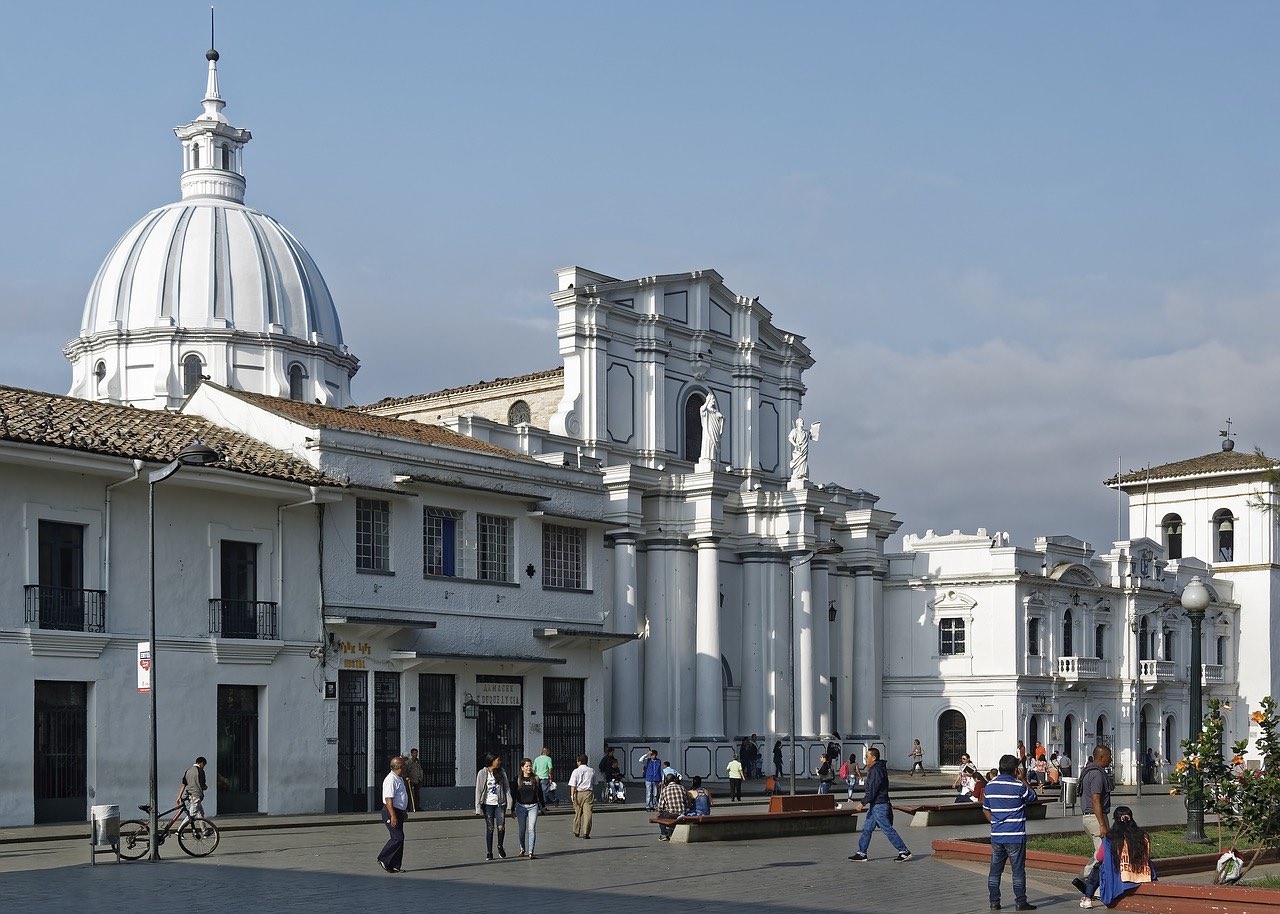 Popayan — this beautiful, white-washed city is Colombia’s religious center. Home to the second largest Easter festival in the world (after Seville, Spain), this town has contributed more Colombian presidents than any other.

Popayan is bordered by the Purace National Park and gateway to the archeological sites of San Agustín and Tierra Dentro in nearby Huilla. 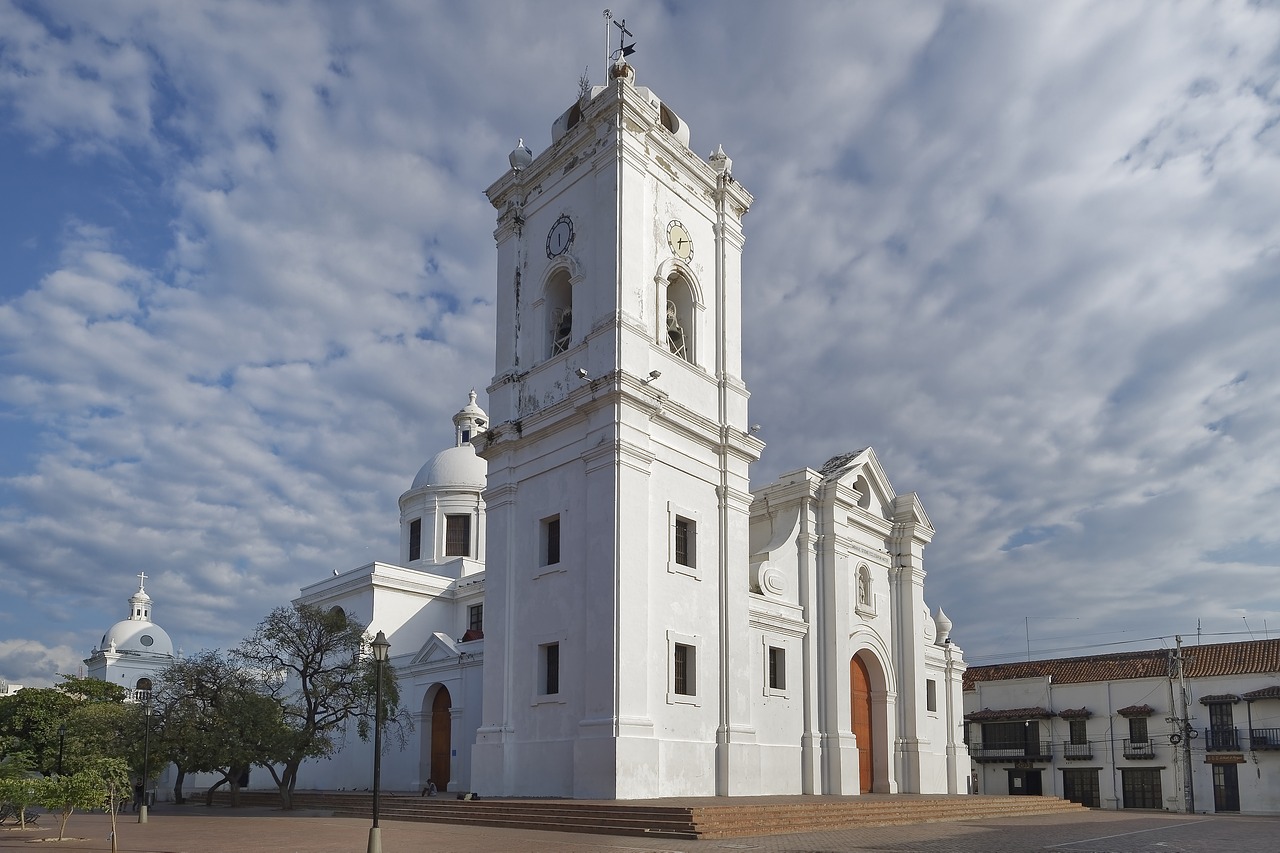 Santa Marta — a popular base for adventure tourism in the beautiful areas surrounding, and unique in the sense that it offers you beautiful beaches one day, and the next one a walk to the foothill of a snowy mountain, the Sierra Nevada de Santa Marta, the highest in the country.

Besides the cities, salsa, sugarcane, and coffee, the following attractions are well worth a visit.

Catedral de Sal — A colossal church built underground in a former salt mine, with passages lined with exquisite sculptures, and a radiant cross rising over the altar of the cavernous nave. It’s accessible as a day trip from Bogota. 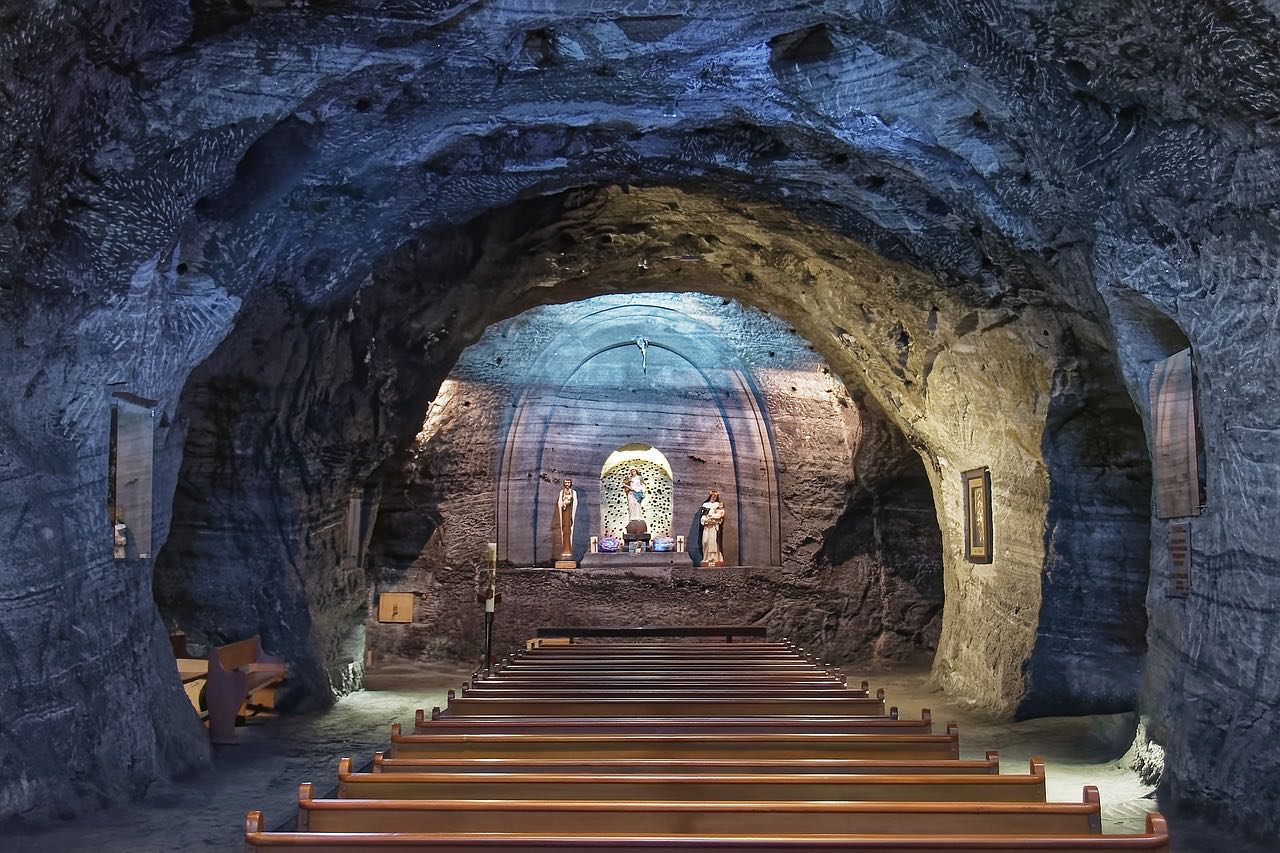 Ciudad Perdida de Teyuni — A pre-Columbian city located in the Colombian jungle close to Santa Marta. Built between the eighth and the fourteenth century by the Tayrona Indians. Nowadays only stone circular shaped terraces covered by jungle remain.

Corales del Rosario — a scenic archipelago and a short boat journey from Cartagena.

Isla Gorgona — This former prison island in the Pacific Ocean is now a nature reserve open for visitors. There is abundant wildlife like monkeys, snakes, whales and sea turtles. It offers excellent diving conditions.

Tayrona National Park — Some of the loveliest coastline in all of South America. 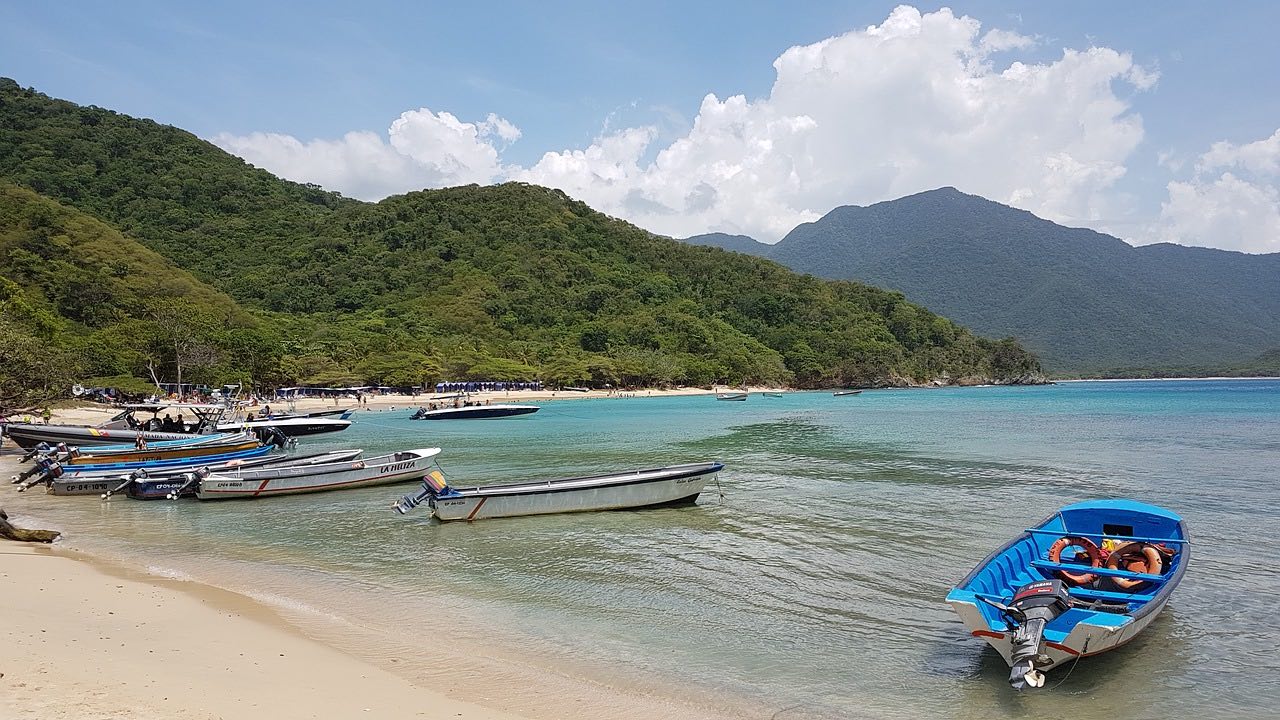 A popular time to visit Colombia includes festivals, such as the Cali’s Fair, the Barranquilla’s Carnival, the Bogota Summer Festival, the Flower Festival and Christmas holidays.

You’ll have to bring a fair amount of different clothes if you plan to travel extensively. Cities in the center like Bogotá and those to the north in Boyacá can potentially reach temperatures below 0°C, so bring a coat.

Some mountains are also covered in snow year-long.

Cities along the Caribbean coast like Cartagena, Barranquilla, and Santa Marta are hot and humid, while some cities at mid-altitude in the Andes like Medellín (the City of Eternal Spring), Manizales, and other cities in the Coffee Triangle region always have beautiful temperate weather.

Catholicism is the most popular religion. 90% of the population is Catholic. The country’s culture shows influences from Latin America, Native America, and Spain.

The official language used here is Spanish. There are 68 other recognized languages spoken regularly. People working in the tourism industry can speak some English but most locals (including uber and taxi drivers can barely understand and speak English).

You may want to learn a few Spanish words, numbers, and common questions to be able to converse with the bus, uber, taxi, and street vendors.

The official currency is Colombian Peso (Cop$). As you can see, the sign is the same as the USD $. Exchange rates fluctuate. Current rates are available from XE.com.

The currency exchange is available at the airports, in banks, bureaus de change, and some hotels. Other exchange facilities may charge additional commissions.

There are also plentiful ATMs throughout the main cities.

There are plenty of taxis in big cities and they are reasonably cheap. However, as a tourist, you may be sometimes overcharged. You can also hire a car, although you need to be over 25 (in some cases – over 21) to do that.

Roads are generally in reasonable condition and cars drive on the right side of the road here. However, city driving may be chaotic and dangerous.

In Colombia, they use electric sockets of types A and B, so you don’t need to bring an adapter if you are coming from the USA. Also, the standard voltage is 110V.