The Andalusia region is the southern part of Spain. It has a heritage back to the Roman Empire and has an influence of both the European culture and Moorish culture.

To the south in the Province of Cadiz at the very tip of Spain lies the British overseas territory of Gibraltar where it is separate from North Africa by just a few miles. 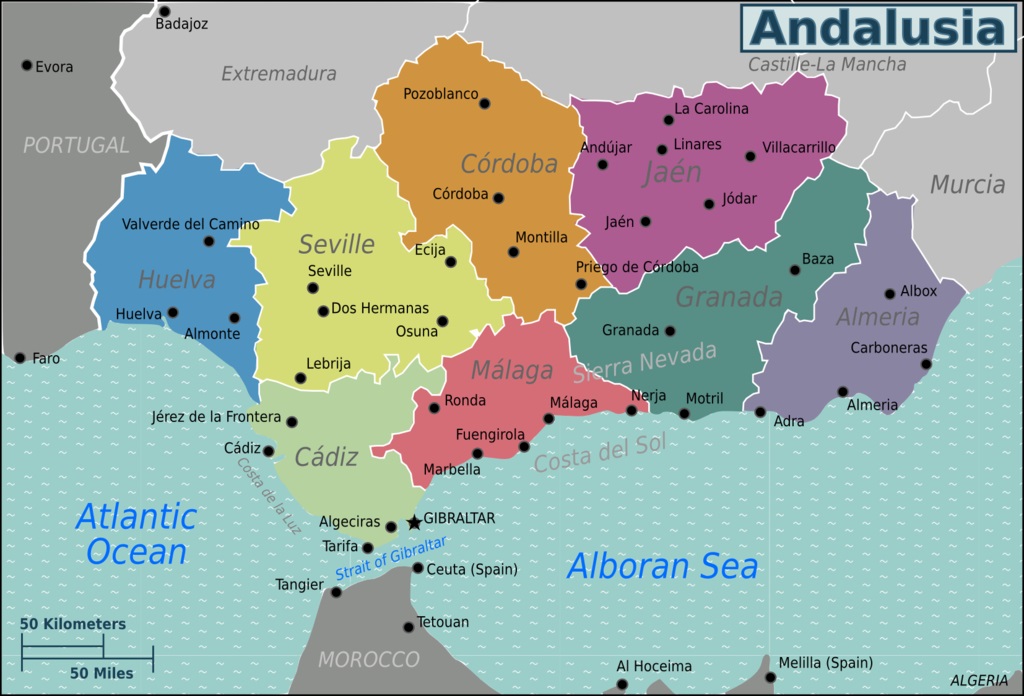 Andalusia has a rich Moorish heritage, including many fantastic examples of Moorish architecture which were built during the eight centuries when Andalusia was the center of the Arab population in the Iberian peninsular. The Moorish rule effectively ended in 1492 AD when the Christians recaptured Granada.

Nowadays, the region is a very popular tourist destination with a lot of British and German package holidayers coming to stay in the concrete resorts on the Costa del Sol. But if you stay away from the concrete resorts you will find lots of culture, amazing scenery and great food. 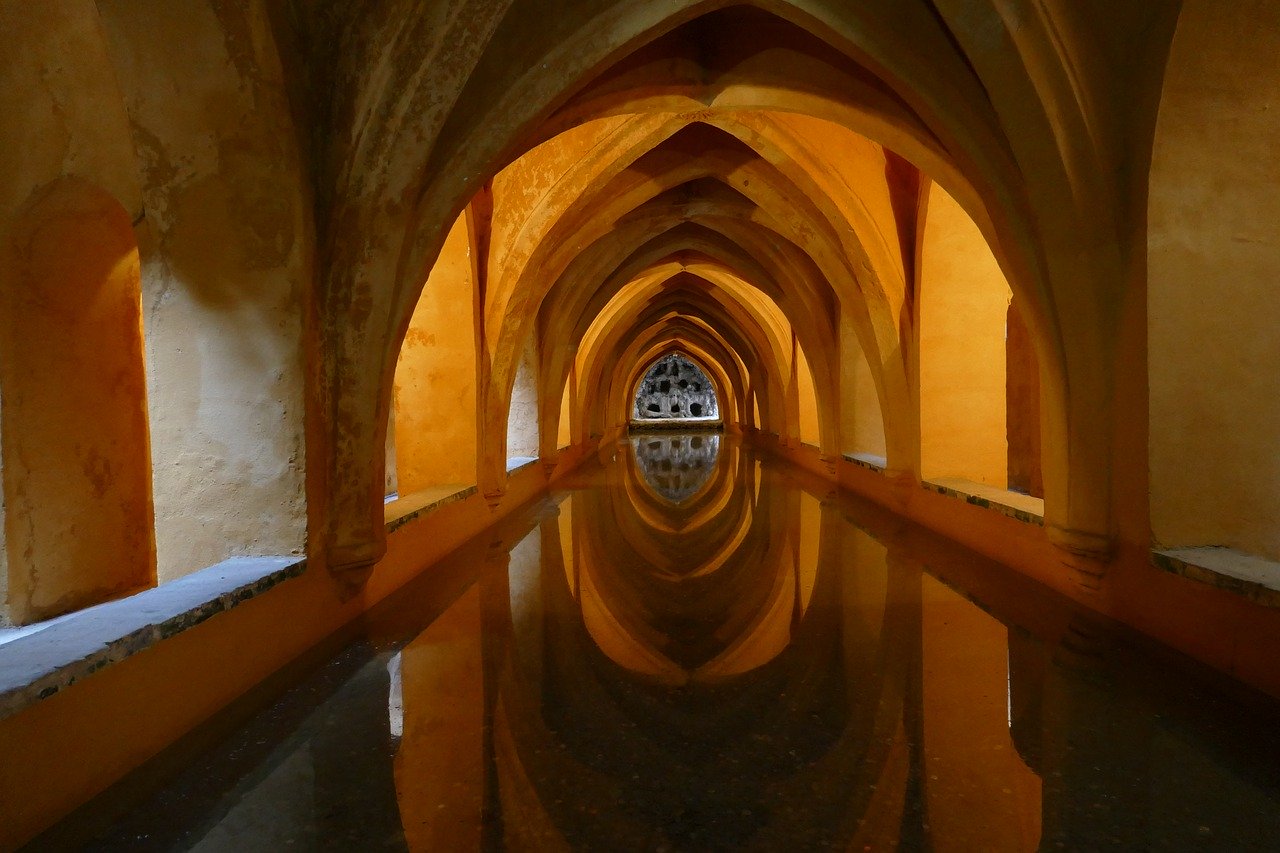 Andalusia is divided into eight provinces, each having the same name as its respective provincial capital city. Several of these regions have been shown in dozens of movies and TV series, such as,

If you are visiting Spain, most likely your Andulasia tour will begin on on the cities below. All of them are beautiful and worthy of exploration.

Things To Do In Andalusia

Moorish architecture in Granada, including the Alhambra.

Lake Negratin is situated at the foothills of Mount Jabalcon. As one of Europe’s largest lakes, it really is worth seeing not least for the most magnificent lunar-landscape that surrounds it.

The rock formations and the colors it produces during different times of the day can be likened to those of the Grand Canyon.

There is a manmade beach where you can laze the day away, a number of restaurants dotted around the lake and on a nice day you can swim or take out a pedalo boat, which might lead you to pink flamingos and various other wildlife.

Seron is nestled on the lower slopes of the Sierra de los Filabres and is a picturesque town that cascades down the hillside. Dominated by its Castle, which sits at the very top, Seron is famous for its ham and provides a more traditional experience of Andalusian life.

It is a beautiful location to start your exploration of the Filabres, or visit at the right time of year and you might find yourself submerged in a vibrant fiesta.

Las Menas, an old mining village abandoned thirty years ago, makes an interesting stop in the Sierra de los Filabres. You can investigate old ruins crumbling amidst the most breathtaking countryside, stop for coffee and cake at the hotel and even camp for the night.

Ronda is a beautiful town with an impressive bridge along the deep gorge.

Ubeda is a Renaissance monumental town of many hills included in UNESCO’s World Heritage List.

An old spa village above a gorge.

The sunny beaches and beautiful villages along Spain’s southern coast. Plenty of long clean beaches for you to enjoy and relax.

The Sierra Nevada is the highest mountains in the Iberian Peninsula, excelling for skiing, hiking, rock climbing, and horse riding.

Horse riding and Spain go hand-in-hand and with such spectacular mountain ranges at your disposal as the Sierra Nevada and Alpujarra Hills; you have a feast of beautiful Andalusian trekking land to indulge in astride your faithful friend.

There are several stables situated in these areas and all offer the option to ride for an hour, a day, or even as long as 7 nights.

A mountainous district south of the Sierra Nevada.

Flamenco is the all-Andlusian art with a history stretching back over 3,000 years. The Museo del Baile Flamenco (Flamenco Dance Museum) is the ideal place to learn more about this phenomenon. Shows are offered on Friday and Saturday nights at 19:30, too.

Celebrated on 28 February annually. It commemorates the February 28, 1980 referendum on the Statute of Autonomy of Andalusia, in which Andalusians achieved recognition for an autonomous region within the state of Spain.

Andalusía has a Mediterranean climate with hot, arid summers and mild, relatively wet winters. Temperatures often surpass 35°C in the summer and average 10.5°C in January and February, the coolest months.

Spring warms up gradually, and days in which it is possible to comfortably sunbathe can show up as early as May.

Autumn experiences warm temperatures in September, that can possibly extend into October.

The region is overall quite sunny, amongst the sunniest in Europe after regions of Italy, Greece and Portugal.

Like most of the rest of Spain, Andalusia’s main language is Spanish.

You have two choices: either use the Bus services around Andalusia that are provided by Alsina Graells and DAMAS, or, use a private rental car or guided tour services.

When in Granada, it is advisable to avoid women who are offering plants (usually heather). They will offer you a plant for free, and then when you accept it will read your palm and then demand money.

If you refuse to give it to them, they may start screaming at you and it is a situation that you will generally want to avoid having to occur.

Aside from this, the area is generally very safe, but one should still take the usual precautions, especially in Malaga, Seville, and other bigger towns.