Nagaland, the tribal-state famous for its Hornbill festival is one of the lesser-visited states of the seven sisters. Bordered by Assam, Arunachal Pradesh, Manipur, and Burma, this quaint state, with its diverse history and culture has retained its untouched beauty and grandeur.

The state is often recognized as a conglomeration of as many as 23 tribal sects, each with a dynamic and vibrant lifestyle that defines one of India’s finest sub-cultures

Things To Do In Nagaland

Adorned by the mighty Himalayas and many small hills and greenery, lush vegetations and colorful cultures, this state boast of its pleasant climate, natural beauty and much more. 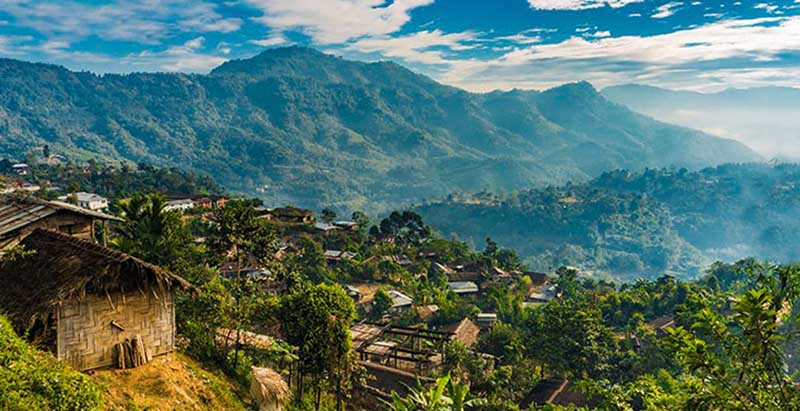 A village in Nagaland with its tribal houses / CC0

The capital of the state can be accessed by road from Dimapur. Walking is the best way to feel the pulse of the capital. Since Kohima is on a hill ridge, you almost always travel up or down so better be ready for some exercise.

Visit the Kohima Zoo, Museum and War Cemetry to get to know the place better. Shop at Naga Bazaar which is in the heart of the city. You can also find many women knitting shawls in their verandahs. Just ask them to teach you and they will be most helpful in doing so. 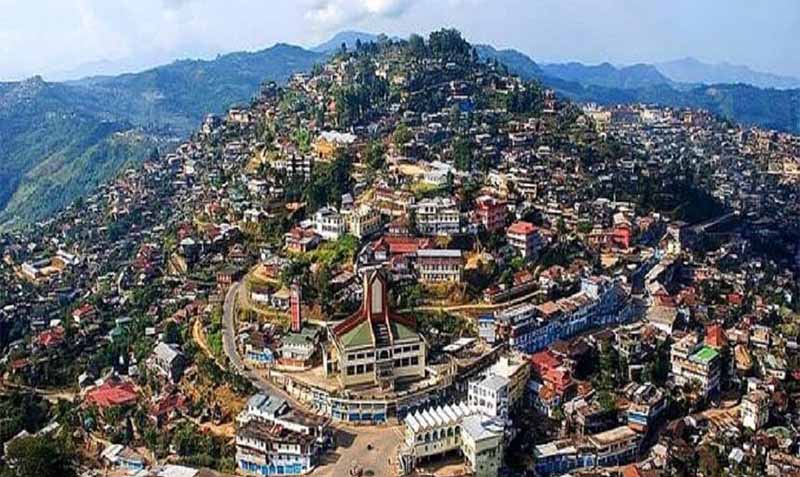 Tuensang is home to four major tribes namely Yimchunger, Chang, Sangtam and Khiamniungan. Tuensang Village which is one of the oldest villages in the state and the ancestral domain is still intact.

Chigmei village is also one of the biggest villages of Chang tribe, from where you can see the enchanting Mount Saramati. Nature is a major thing that you will see here, purely virgin forest. Going hunting and fishing with the locals can be great fun.

Standing on a magnificent hilltop, this tourist village is the epitome of traditional Naga life. Located around 41km from Kohima, the village has dedicated huts for the tourists with all the luxury and basic comforts of life.

From the traditional rice beer to bamboo-baked dishes, enjoy the best of Naga cuisine while you’re in Touphema. The best time to visit this heritage village is from October to May and during the Angami Sekrenyi, a traditional festival celebrated in February. 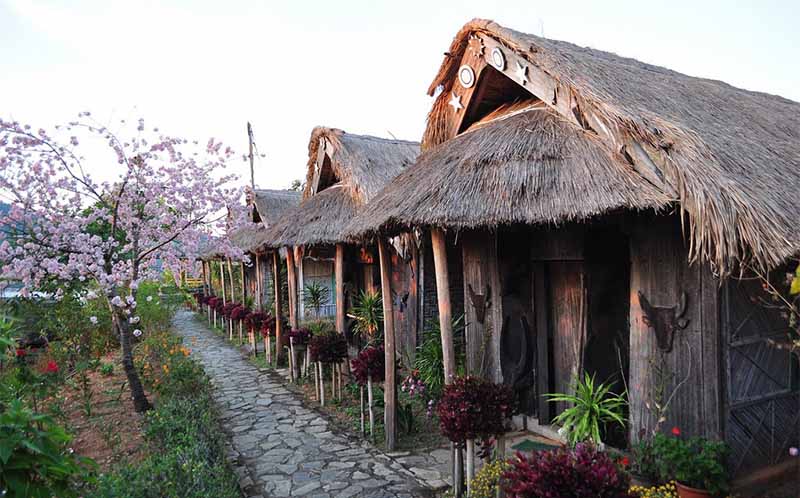 Have a glimpse of Nagaland’s bygone history by visiting the ancient Kachari Ruins in Dimapur. A reminiscent of the 10th century Kachari Civilization, this heritage site tells the glorious tales of the state and its diverse history 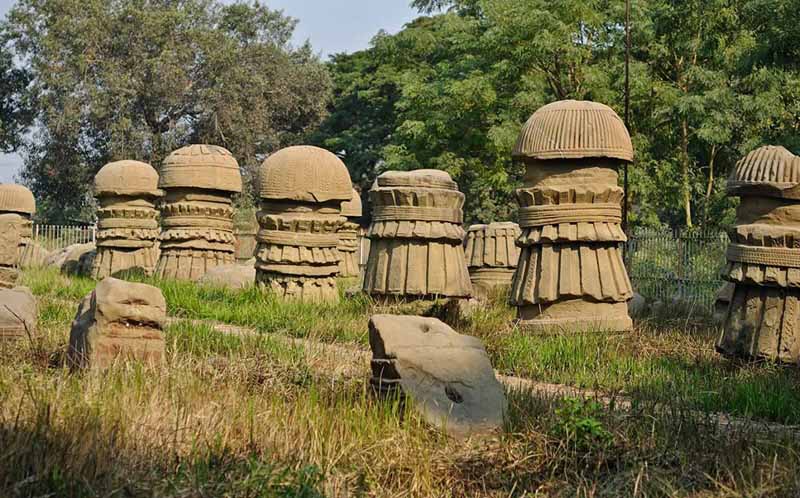 The venue ground of the famed Hornbill Festival, Kisama or the Naga Heritage Village is a testimonial hamlet of the Naga traditions and cultures. On a visit to this rustic hamlet, one can witness as well as experience the values that bind the Nagamese people.

The geographical position is an intriguing factor for travelers reaching this village. In Longwa, international borders pass through the village chief’s house. Half of his house is in the Indian territory and the other half in Burmese and the village itself lies in two countries!

Photo: Half the house is in India and the other in Myanmar! / CC0

Filled with craftsman, this village in Nagaland is known for its indigenous wood carving, intricate bamboo and cane works. You can visit this appealing hamlet in Dimapur, to witness the traditional art, culture, and craftsmanship of the Nagamese. 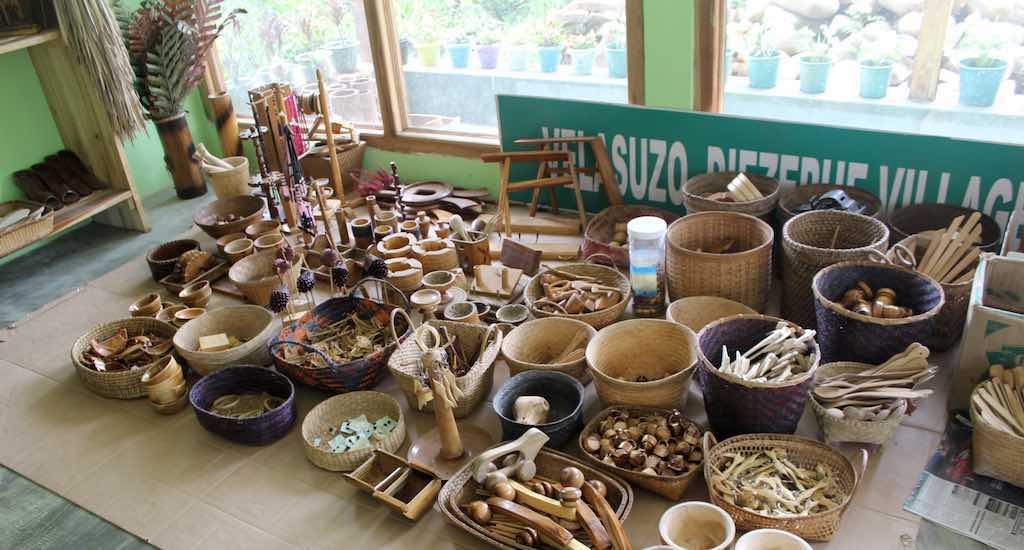 Nagaland is called the Switzerland of the east and there is a reason for it. The scenery you see from this state is mind-blowing and the mountain ranges with its streams and waterfalls twisting here and there are the most picturesque you can find.

The highest point of Nagaland, Japfu Peak is undoubtedly the best spot to witness the beauty of the Dzukou Valley. A trek to this peak is all about fun, adventure and the misty magic of Nagaland.

Amur Falcons at the Doyang Reservoir

Nagaland is also known as the falcon capital of the world, owing to the migration of the Amur Falcons near the Doyang Reservoir every autumn. Almost 1 million falcons can be spotted here for about a month during this time. This is an exceptional sight to behold for birdwatchers.

For the nature lovers, they can indulge in a lively and delightful bird-watching tour in Khonoma hamlet. Jotted on a small hill, Khonoma is also credited as the first ‘Green Village in India’. 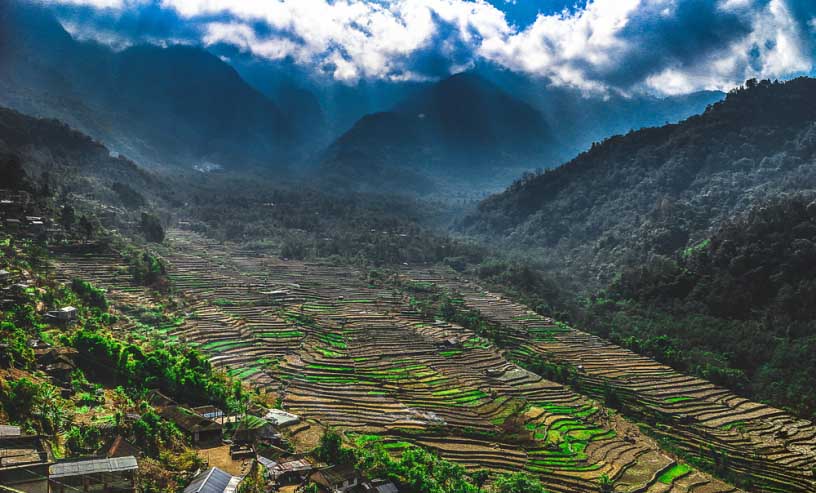 One of the mystique places in Nagaland, Mount Tiyi is also known as the ‘Mountain of Life’. According to the legends, the mountain has an orchard that can only be explored by the most humble and pure souls.

A scenic and captivating stream, Dzulekie is undoubtedly the best picnic spot in Nagaland. Flowing through lush and verdant forests and pictorial hills, this stream seems to make its way underneath the ground! 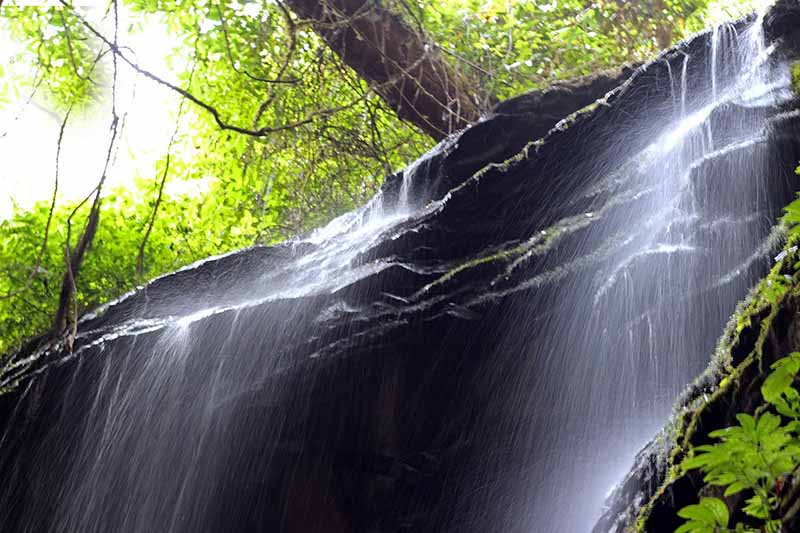 Photo: Water falling near Kohima from the Dzulekie stream / CC0

One of the only remaining virgin forests in India, the Satoi Range is an ideal spot for trekking and camping in Nagaland. Located in the Zunheboto district, the mountain range is home to the Blyth’s Tragopan, a rare bird species, which is a treat to spot.

Sights of rare rhododendrons during the month of April and May make it one of the choicest destinations in the state. 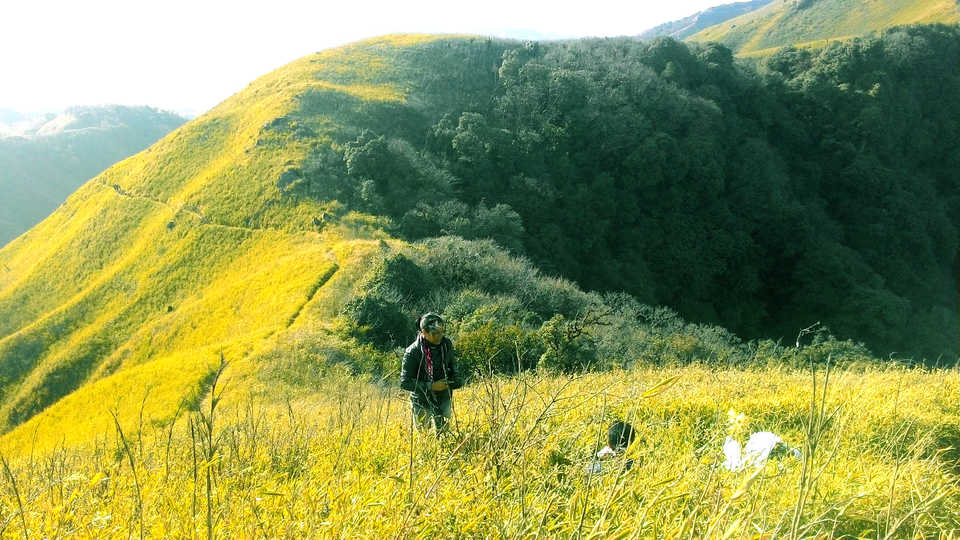 Photo: Trekking should be in your to-do list when in Nagaland / CC0

The best time to explore it is from November to February.

Photo: An elephant roaming in the Sanctuary / CC0

Well, the cascade is named such due to its three different branches that create a magical spell on the visitors. A trek to the base of this waterfall is also one of the best things to do in Nagaland.

Perched at a height of 2,462m above the sea level, this magical valley is one of the most beautiful locations in the state. While in Nagaland, go trek to this pictorial valley. Adore its pristine beauty and also witness some of the rare and exotic species of lilies. 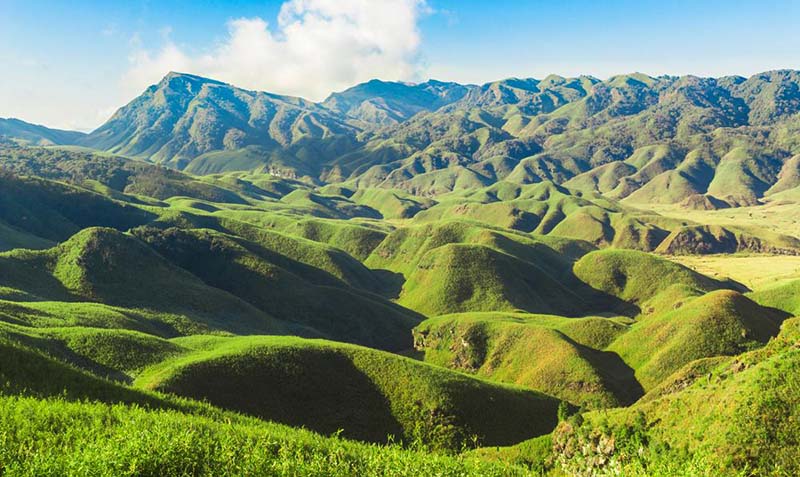 December is the most crowded season due to the Hornbill Festival and it is a good time to visit weather wise as well.  Winters could be the ideal season to visit but the temperatures throughout the year are reasonable and you can go there anytime.

Nagaland has an ancient history of tribes whose count sums to be as much as 66 including the sub-tribes. Out of these, 16 are considered as major tribes. With a difference in language, all tribes have a similar leafy dress code, eating habits and traditional laws.

Tribe traditions and loyalties play an important role in Naga society. They have a strong warrior background.

Their costumes aptly display the ancestral lineage. The design of shawl denotes the social status of the wearer. The attire worn by the males includes a conical red headgear decorated with Hornbill’s black and white feathers and wild boar’s canine teeth. You cannot overlook the necklaces, the bangles and the tattoos which are reminiscent of the old age wars and sacrifices.

The ordinary metals such as iron, brass, and tin are used to make exquisite jewelry in the form of armlets, neckbands, bangles and much more. Beads are also used to make beautiful necklaces.

The Nagas have carried their traditional art of weaving by knitting unique colors and designs producing shawls, shoulder bags, table mats, etc which reflect the integrity and soul of their ancient dynamics.

All the tribes have distinct cuisines which use meat, fish and fermented products extensively. The locally grown herbs, ghost peppers, ginger, and garlic are used a lot in almost all the dishes.

Smoked meat is produced by keeping the meat above the fire or hanging on the wall of the kitchen for 2 weeks or longer, which could last for the whole year ahead. Anishiis fermented yam leaves made into patties and smoked over the fire or sun-dried.

Smoked pork cooked with fermented soya bean is the dish of state cherished along with rice and chutney called Tathu. The other common dishes are snails cooked with pork and silkworm larvae, Naga curry made with crushed potato and tomato.

Another popular dish is a soupy dish which is had with cold rice made mostly when one feels under the weather or a migraine, called by different name by the different Naga tribes. 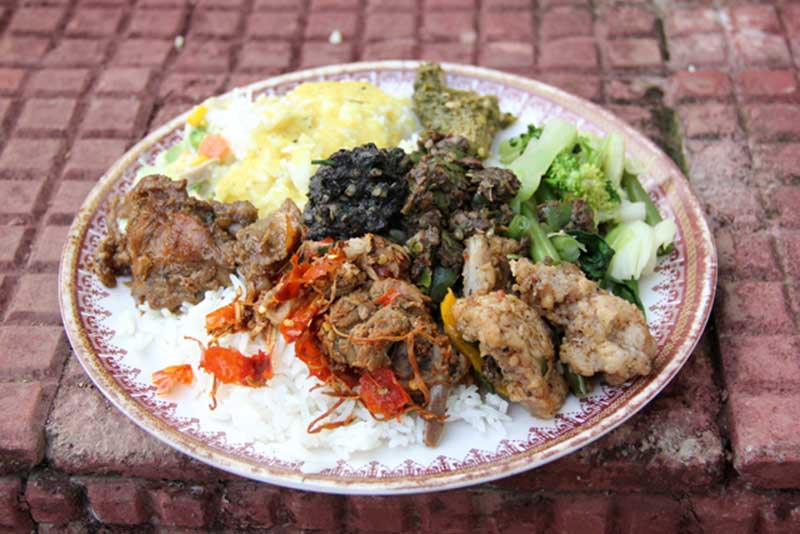 The best way is to fly into Dimapur or take the fast train from Guwahati which leaves every morning. You can then connect to a share taxi in front of the Dimapur railway station and reach Kohima by lunchtime.

Direct buses also run daily between Guwahati and Kohima. The road is the only way to travel within the state and taxis are the best bet.

Foreign nationals no longer need a Restricted Area Permit. If flying in, you should register with police at the airport, but even this is not strictly required.

There are many homestays and hotels now as tourism has developed in the state. Depending on your budget you can check in on online sights like Make my trip or Yatra to get the best deal.