Manitoba is a province in the Prairies of Canada. It is well known for its agriculture, culture and history. Visitors come for the fishing and other outdoor activities, although there are several historical sites worth visiting.

It has a widely varied landscape, from arctic tundra and the Hudson Bay coastline in the north, to dense boreal forest and prairie farmland in the central and southern regions.

Note: The province has 1.3 million inhabitants, half of them in Winnipeg, the capital. One-tenth of the population belongs to the First Nations (Indigenous) peoples.

Indigenous peoples have inhabited what is now Manitoba for thousands of years. In the early 17th century, European fur traders began arriving in the area and establishing settlements along the Nelson, Assiniboine, and Red rivers, and on the Hudson Bay shoreline.

Great Britain secured control of the region in 1673, and created a territory named Rupert’s Land which was placed under the control of the Hudson’s Bay Company. Rupert’s Land, which covered all of present-day Manitoba, developed significant settlements of Indigenous and Métis people in the Red River Colony.

The resolution of the rebellion and further negotiations led to Manitoba becoming the fifth province to join Canadian Confederation. 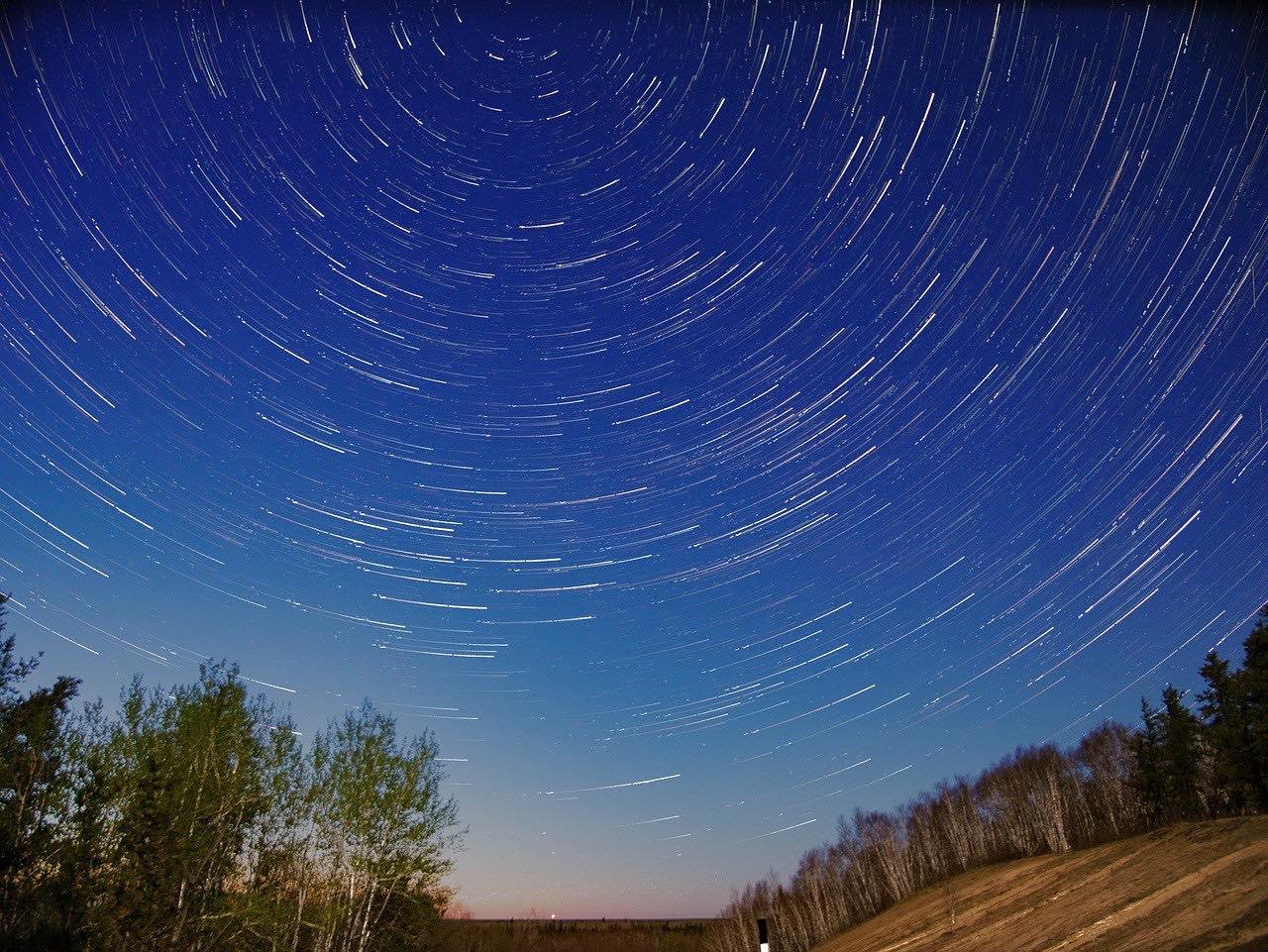 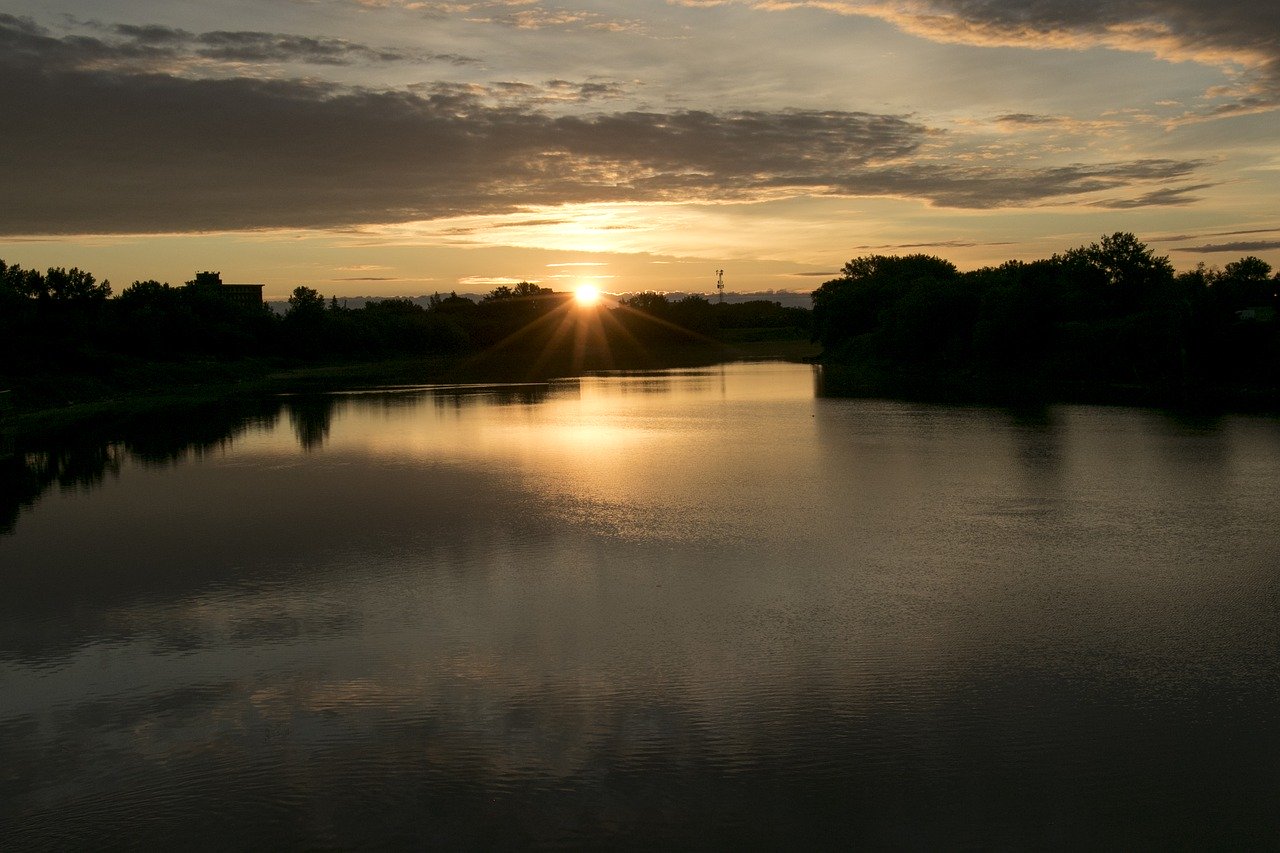 A Beautiful Sunset in Manitoba

The 12-m-high dunes and vast area of warm sand beach.

A beautiful 13-m-high waterfalls accessible from the parking lot.

There are three different ecosystems converge in the area: grasslands, upland boreal and eastern deciduous forests.

There are many historical sites and ruins found in Manitoba from the fur trade era of Canada.

Learn about the life in the past by visiting the Lower Fort Garry Historic site found in the Interlake region that shows how life was like in the 1800s.

The Forks National Historic Site is a place where people have been meeting for around 6000 years. The Forks is the confluence of the Red and Assiniboine Rivers, Winnipeg’s founding place.

There are many different activities to do at the Forks like shopping at the Forks Market, the Johnson Terminal. 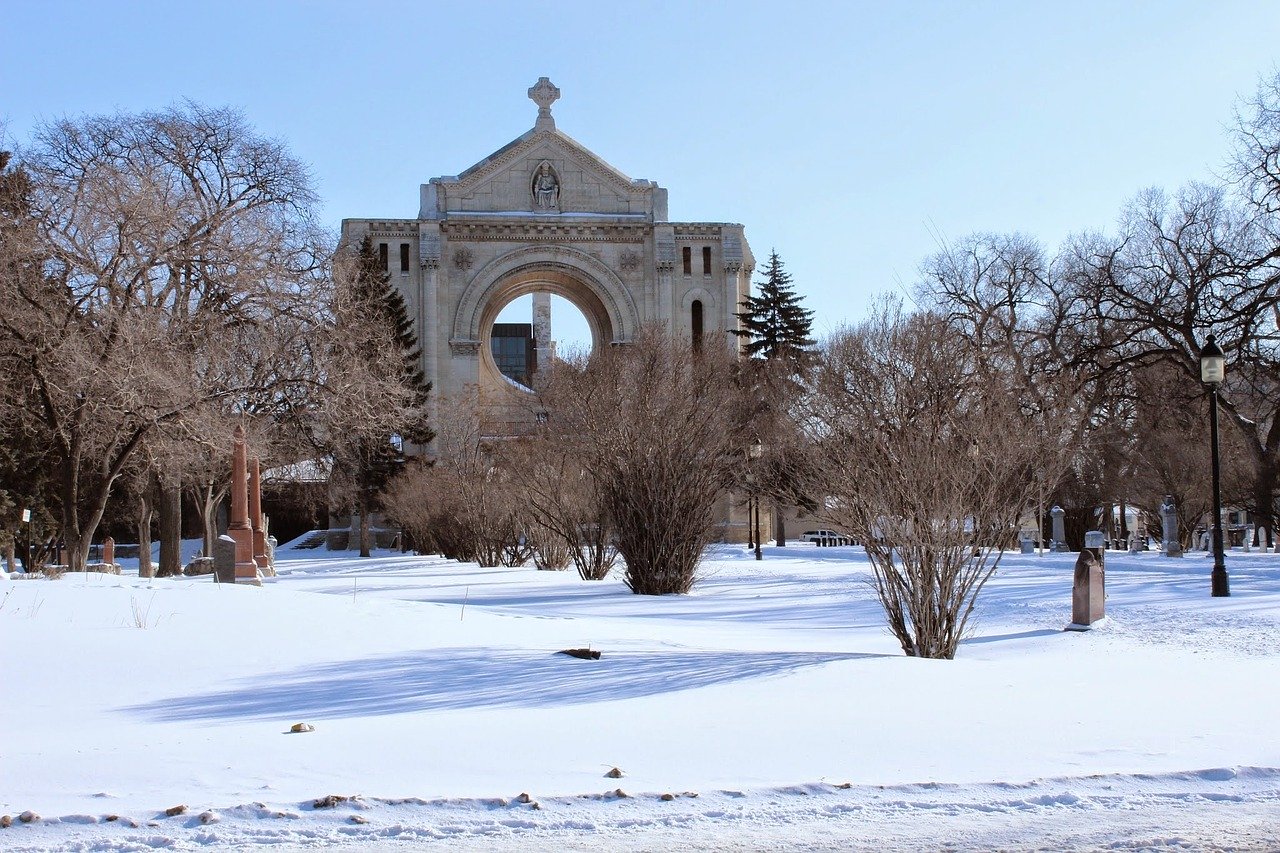 Another place to visit is the remains of the St. Boniface Cathedral in Winnipeg which was burned down now another church is placed inside the cathedral ruins.

Skating on river paths is a popular activity during winter. The Forks is a beautiful place in the heart of the city that includes things like parks, gardens, sculptures, shops, and restaurants. The site is a model for urban renewal and waterfront development.

Winnipeg has the spectacular Canadian Museum for Human Rights, which opened in 2014 as the first museum focused on human rights.

The city is also home to the Manitoba Museum, the Winnipeg Art Gallery, and many other cultural institutions. Smaller cities in the province typically gave smaller, regional museums and galleries.

The International Peace Garden found on the Canada-US border near Bossivain in Western region is a beautiful place that celebrates the peace between Canada and US.

Oak Hammock Marsh found in the Interlake region is a nature reserve where you can see many different type of birds including the Canada goose and the Snowy Owl.

Riding Mountain National Park is an excellent area to see large wild mammals and many species of birds in their natural habitat. 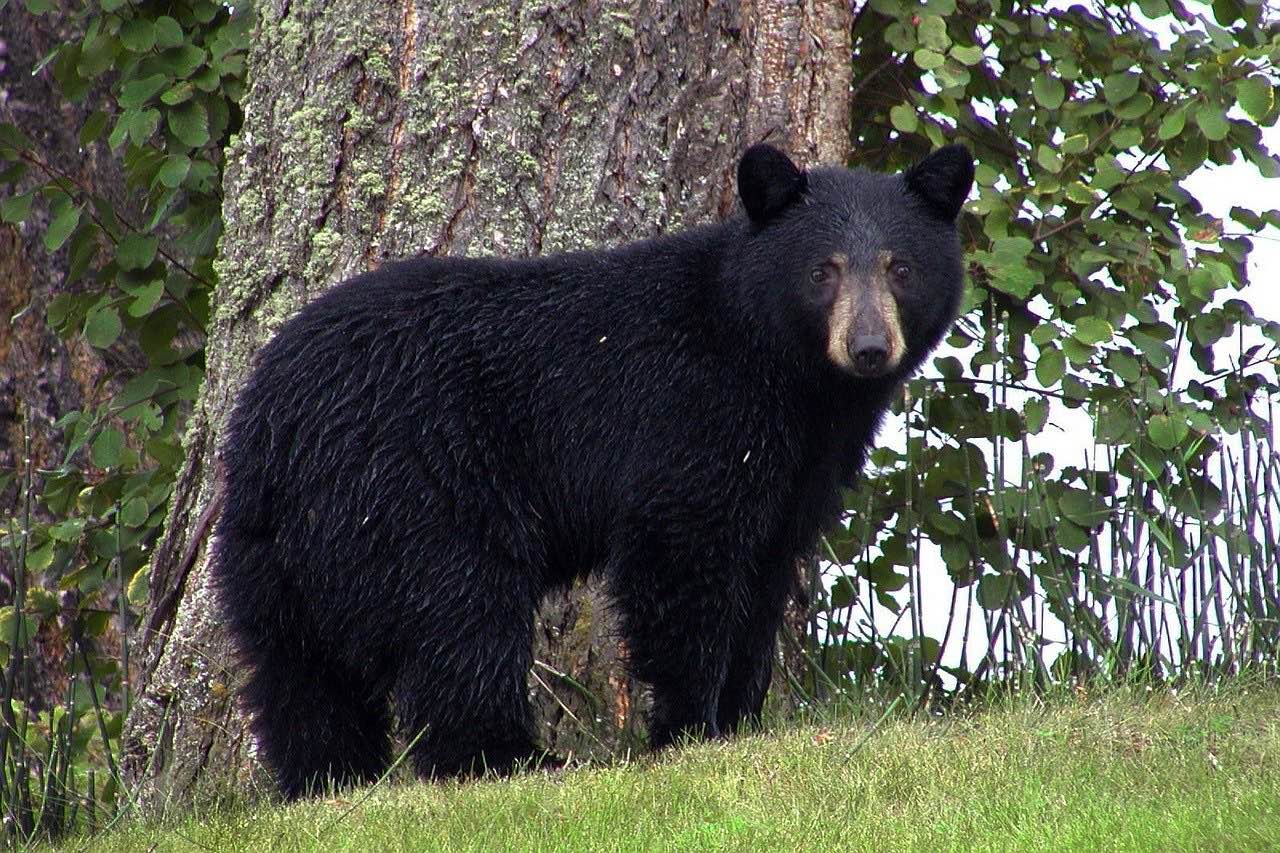 Churchill is known for its Polar Bears and Riding Mountain National Park and adjacent Prairie Mountain area for its abundant population of Black Bears that vary in color from blond, cinnamon and chocolate to black.

During the summer time there are many fishing areas found in Manitoba like in Lockport found in the Interlake region is an example where you can see many fishermen around the Red River. During the winter time you can experience ice fishing where people can rent huts to go ice fishing in.

There are many festivals in different regions of Manitoba.

Some of the best known festivals celebrated in this region is the Folklorama festival found all over Winnipeg.

The Winnipeg Fringe Festival is a popular festival that takes place in Winnipeg’s Exchange District.

Another popular festival in Winnipeg is the Festival du Voyageur during February at Fort Gibraltar.

The Corn and Apple festival found in Morden found in the Pembina Valley region which sells some of its delicious Morden sweet corn and apple cider.

There are also many inland beaches found throughout the province. Some of the well known beaches are Grand Beach and Winnipeg Beach in the Interlake region that are along Lake Winnipeg. Lake Winnipeg is the world’s 11th-largest lake.

During the winter time there are many activities available like tobogganing on some of the toboggan slide like the one found in Kildonan Park in Winnipeg.

Skating on the river paths including skating on world’s longest skating trail on the Assiniboine and Red Rivers, and other skating trails in Winnipeg.

Snowmobiling throughout the province is a fun way to get around.

Note: Always check the weather report prior to going out in winter. Temperatures can reach as low as -40 degrees from late December to early March, presenting significant dangers for anyone who is unprepared.

Manitoba has an extreme continental climate. Because of the generally flat landscape, it is exposed to cold Arctic high-pressure air masses from the northwest during January and February.

In the summer, air masses sometimes come out of the Southern United States, as warm humid air is drawn northward from the Gulf of Mexico. Temperatures exceed 30 °C (86 °F) frequently in the summer, and the combination of heat and humidity can bring the humidex value to the mid-40s.

Within Canada, Manitoba has the clearest skies year round, and ranked second for clearest skies in the summer and for the sunniest province in the winter and spring.

Southern Manitoba (including the city of Winnipeg), falls into the humid continental climate zone. This area is cold and windy in the winter and often has blizzards because of the open landscape.

Summers are warm with a moderate length. This region is the most humid area in the prairie provinces, with moderate precipitation. Southwestern Manitoba is drier and more prone to droughts than other parts of southern Manitoba.

This area is cold and windy in the winter and has frequent blizzards due to the openness of the Canadian Prairie landscape. Summers are generally warm to hot, with low to moderate humidity.

Southern parts of the province just north of Tornado Alley, experience tornadoes, with 16 confirmed touchdowns in 2016.

The province’s northern sections (including the city of Thompson) fall in the subarctic climate zone. This region features long and extremely cold winters and brief, warm summers with little precipitation. Overnight temperatures as low as −40 °C (−40 °F) occur on several days each winter.

English is the predominant language. French is also spoken in Winnipeg and other parts of the province but is slowly disappearing. 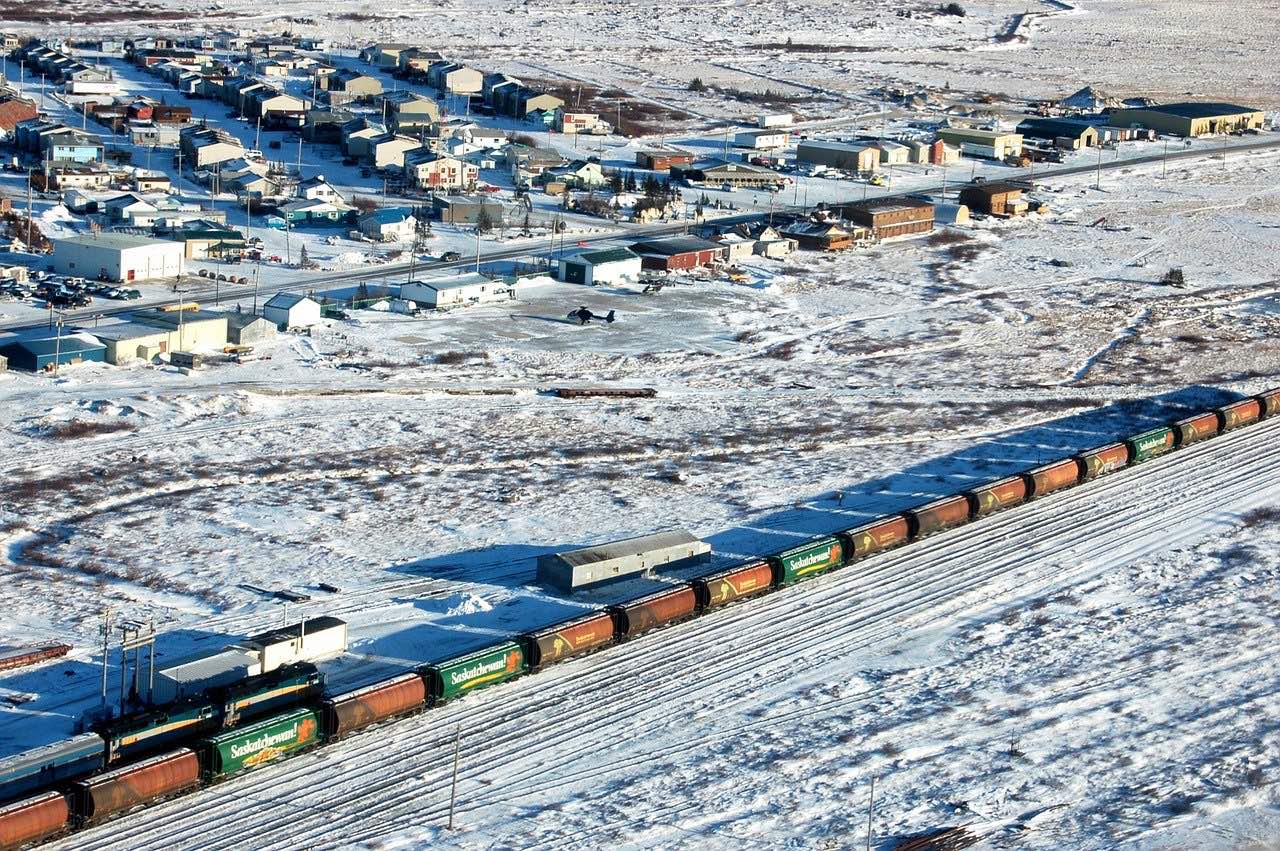 Like most of Canada’s provinces, Manitoba is large, so a car or any other road vehicle is probably the most convenient way to get around Winnipeg and all areas in the province.

Enjoy the fine grain products such as the different varieties of bread offered in the different communities and restaurants. Manitoba also is known for producing the best pork products in the world, including back bacon. A popular dish in Manitoba are perogies.

The drinking age is 18 – younger than most other provinces in Canada. Manitoba is also the home of Crown Royal in Gimli.

The tap water in most communities is quite delicious, as far as water goes, though in some locales, where wells are used to supply the municipal water system, there is a pronounced mineral taste.

The provincial capital of Winnipeg has an aftertaste to its water, though it does not settle-out solids like, say the water in Regina, Saskatchewan.

Did you know? Manitoba is known as one of the wettest provinces, and has in excess of 100,000 lakes.

Winters in Manitoba are harsh, and the relative lack of moderating effects by oceans and its relative flatness makes most of the province exposed to weather extremes. Parts of Manitoba near lakes are prone to lake effect snow. Summers are another story, with the possibility of high humidity when the warm air from the Gulf of Mexico in the south blows through the province.

There have been some cases of West Nile Virus in the province it is recommended that you do the following things: