The old city center of Vienna is a UNESCO World Heritage Site, so what less can you expect from the capital itself. It is the most populated as well as the cultural and administrative capital of Austria.

Things To Do In Vienna

Vienna has a rich history as the capital city of the monarchy, and thus, there is an abundance of historical buildings and museums. Most of these, including Stephansdom (St. Stephen’s Cathedral) and the three most well-known museums, Kunsthistorisches Museum (Museum of Fine Arts), Naturhistorisches Museum (Museum of Natural History) and Albertina, are located in the Innere Stadt.

The Ring Road (German: Ringstraße) is a circular road surrounding the Innere Stadt district of Vienna and is one of its main sights. Its architecture is typical of the eclectic, historicist style called Ringstraßenstil (Ring Road Style) of the 1860s to 1890s.

Built-in the style of the Renaissance according to plans by Heinrich von Ferstel, the MAK- Austrian Museum of Applied Arts/Contemporary Art is the first museum building on the Ringstraße.

The Schloss Schönbrunn palace, a part of the UNESCO World Heritage List, is located in the Outer West area.

One thing you should not miss when you visit Vienna during the carnival season is to attend one of the many glamorous balls in the city, some of them in wonderful elegant locations like the Vienna Hofburg or the City Hall (Rathaus).

The most widely known and elegant balls are the Opera Ball in the State Opera or the ball of the Wiener Philharmoniker. Many professional guilds have their own ball, e.g. the Kaffeesiederball by the Vienna Coffee house owners.

A different twist is the famous Life Ball, an AIDS/HIV benefit which features celebrities and other attendees wearing outrageous costumes. The ball calendar can be found on the pages of the Vienna City Council.

There are also a lot of other open-air-film festivals in summer, e.g. at Karlsplatz, the Vienna Turf Krieau, the Prater, the Arena, the rooftop of City Library on Urban-Loritz-Platz and Schloss Neugebäude.

In the summer, there is also the ImPulsTanz Festival for contemporary dance & performance. They are also good if you are interested in dance workshops.

The canal tours are worth it once you have explored the city on your own. Expect to see a lot of trees and industrial buildings.

Vienna is considered by many to be the spiritual home of European classical music, with many great composers such as Joseph Haydn, Wolfgang Amadeus Mozart, Ludwig van Beethoven, Franz Schubert and Johann Strauss II spending a significant part of their careers in Vienna.

From May to December you can attend concerts of the Vienna Hofburg Orchestra which take place in the Festival Hall and the Redoutensäle of Vienna’s Hofburg Imperial Palace. The orchestra’s program is composed of Viennese waltz and operetta melodies by Johann Strauss, Franz Lehár and Emmerich Kálmán along with opera arias and duets by Wolfgang Amadeus Mozart.

Each year on the evenings of December 31 and January 1 the Vienna Hofburg Orchestra performs traditional Viennese New Year’s Eve and New Year’s Concerts in the Hofburg’s festival halls. These concerts however, along with those that are from similar ensembles, are quite expensive for what they offer, and are intended for the entertainment of tourists.

For a more serious program, other concerts at the Musikverein and the Staatsoper can be attended for as little as €3-4 (standing room). They feature some of the best musicians in the world, including of course, the Vienna Philharmonic Orchestra. With concerts starting at almost the price of a cup of coffee, Vienna boasts a frequent and outstanding roster that is financially accessible to all.

Much of the music scene in Vienna is absent during the summer months, with the exception of the ensembles that cater to tourists. The solution would be to travel to Salzburg, where the Vienna Philharmonic resides during the summer.

For those who wish to watch opera, the Vienna State Opera is the most famous opera house in the city. 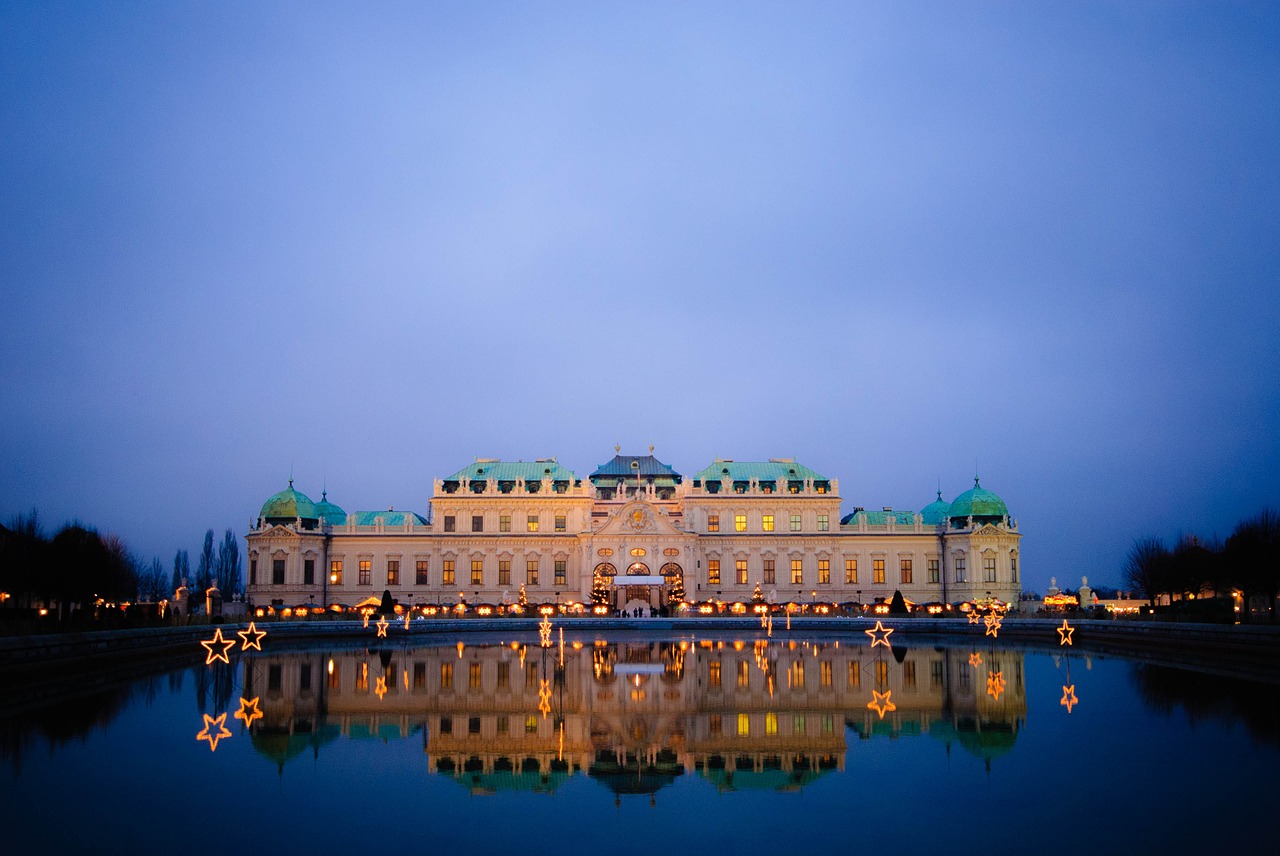 Traditional Vienna is but one of the many façades of this city; the historic center, a UNESCO world heritage site, is sometimes begrudgingly compared to an open-air museum.

But Vienna is also a dynamic young city, famous for its (electronic) music scene with independent labels, cult-status underground record stores, a vibrant Monday through Sunday club scene, multitudes of street performers, and a government that seems overly obsessed with complicated paperwork. However, people are willing to go out of their way or bend the rules a little if they feel they can do someone a favor.

The Viennese have a singular fascination with death, hence the popularity of the Zentralfriedhof (Central Cemetery), where there are more graves than living residents in Vienna, as a strolling location and of Schrammelmusik – highly sentimental music with lyrics pertaining to death. Old-fashioned Sterbevereine (funeral insurance societies-literally translated “death clubs”) provide members with the opportunity to save up for a nice funeral throughout the course of their lives.

This service does not exist solely to save their children the hassle and expense – it is considered absolutely mandatory to provide for an adequate burial. Vienna even has the “Bestattungsmuseum”, a museum devoted to coffins and mortuary science. The country’s morbid obsession may be correlated with its higher suicide rate when compared with the rest of Europe.

Here too, the socialist Vienna has its hand, the city also offers a socialized undertaking service, with hearses branded in the same department of public works logo as the subway cars, and a link to the transit-planner on their website.

Ever since the Polish king Sobieski gave Vienna the coffee acquired from his victory over the invading Turks, the Kaffeehauskultur is an integral part of the Viennese lifestyle.

Vienna is also famous for its coffee culture. “Let’s have a coffee” is a very commonly heard phrase, because despite incursions by Starbucks and Italian-style espresso bars, the Kaffeehauskultur is still the traditional way to drink a cup of coffee, read the newspaper, meet friends, or fall in love.

Most Viennese speak a range and mix of Viennese German and Standard German (“Hochdeutsch”) as their mother tongue, unlike in most other parts of Austria where the local dialect is still more prevalent.

The Viennese German is counted amongst the Austria-Bavarian dialects. It used to be specifically split by districts. It also had many Yiddish influences (“Hawara”, “Beisl”). However, nowadays, basically, everyone speaks Standard German as well, though the Austrian variety of German does differ in accent and somewhat in vocabulary (e.g. plastic bag is “Plastiksackerl”, not “Plastiktüte”) from Standard German as used in Germany. These differences are small enough that knowing Standard German is enough to get by.

Should someone be so proud as to continue speaking in dialect and you don’t understand, just ask the person to speak “Hochdeutsch” (standard German, literally “high German”) and he/she generally will. Standard German is the sole official language and thus the main recognized written language.

People in jobs dealing with foreign visitors are usually fluent in English, though English is not as universally spoken as in northern European countries, and signs (including descriptive signs in museums) don’t as often include English translations as in some other European countries, so those who don’t speak German may find a traveler’s phrase book or bilingual dictionary useful in some situations.

Apart from German and Austro-Bavarian, there are sizeable minorities in Vienna, such as Serbian, Croatian, Turkish and Romanian, who use their own languages amongst themselves and might be helpful if you speak any of their languages and come across a person of that origin.

The traditional Viennese fast food is sausage in all shapes and sizes. You can buy hot sausages and hot dogs at snack bars called “Würstlstand” all over the town. The famous Wiener Würstel is known as “Frankfurter” in Vienna, but many inhabitants prefer Bosna (with onions and curry), Burenwurst, and Käsekrainer or “Eitrige” (with melted cheese inside).

A würstlstand will typically give a choice of sausages served as a “hot dog” (not a North American hot dog, it just means any kind of sausage served in a bun) or “mit brot” (“with bread,” i.e. cut into bite-size chunks and served with a small disposable fork, with a roll on the side). You typically get a choice of mustard or ketchup and (rarely) other condiments, which the server will put on for you.

Roast chestnuts (“Maroni”) are a common snack during the colder months, and are sold from street stalls all over the city, especially near train and U-Bahn stations, and at Christmas markets.

In addition to this, the local snack culture also includes more ex-Yugoslavian and Turkish varieties of fast food, such as the Döner Kebap, sandwiches of Greek and Turkish origin with roasted meat, lettuce, tomatoes, onions, and yogurt and/or hot sauce.

Places that sell kebap often sell take-away slices of pizza too. Good kebaps can be bought at the Naschmarkt. The lower end of the Naschmarkt (further away from Karlsplatz or city center) is cheaper than the upper end (closer to Karlsplatz), and the right lane (facing away from the city center) is reserved for mostly sit-down eateries. Another good place to find snacks (especially while going out) is Schwedenplatz.

By far the cheapest way to get a fast food meal in Austria (and probably the only meal available for just over €1) is buying an Austrian sandwich (sliced brown bread + ham/cheese + gherkin) from a supermarket. Supermarkets with a deli counter (Feinkostabteilung) will prepare sandwiches to take away at no extra charge. You only pay for the ingredients.

There is usually a large selection of meat products, cheese, and bread rolls available here, too. You point at the combination you want, can also mention the max total you can pay, and then pay at the cash register. One of the favorites is the “Leberkäsesemmel”, which is lightly spiced, very finely ground meat baked in a pan, sliced, and served on a roll.

If you know a bit of German, you’ll note that “Leberkäse” literally translates to “liver cheese,” but it contains no cheese and the Viennese version contains no liver. Freshness and quality at the grocery stores are normally better than at a sandwich stand on the street.

Another great way to eat on a budget is at one of Vienna’s hundreds of bakeries. They sell anything from cinnamon rolls to pizza for a good price. It’s also a great breakfast-on-the-run alternative because they also have coffee/espresso to go. However, most places do have a couple of tables and chairs where you can enjoy your food.

The Vienna International Airport deals with European as well as intercontinental airlines. But there is no direct flight to and fro Africa or Northern England. Buses and Trains run from the airport like S- Bahn(train), Vienna Airport Lines Bus, etc.

Another airport near Vienna is the largest Slovak Airport- Bratislava Milan Rastislav Stefanik Airport. Slovak Lines and Blaguss run from the airport to Vienna via Erdberg.

Winter temperatures reach below the freezing point and drizzle is a daily phenomenon. So avoid the months from November to February. But during March, Spring sets and the temperature gets comfortable and high.

It is off-season and probably a suitable time for those looking for a tourist-free trip. Then comes summer, with sunny days in July and August, inviting visitors from around the world.

Appliances working on a voltage of 230 V, will work fine in Vienna. But others need a converter. The sockets are of Type F. Type F is two round pins one. So you need a plug C or a plug E adapter to adjust with the socket.