Thimphu the capital of Bhutan is a city like no other. One of the first thing to strike you will be the fact that there are no traffic signals and a human cop stands at all junctions manning the traffic in perfect order.

Lined with monasteries, dzongs and dzongs, all set in the beautiful valley of the Raidak river, there are quite a lot of things to do in Thimphu.

Photo: A traffic cop at his Kiosk / CCo

The capital city has a lot to take in. The splendid Trashi Chhoe Dzong gives a monastic view to the place and it is also a place which is a host of many colorful Tsechu festivals.

You can even take a stroll by the weekend markets which allow you to taste some of the finest dried fishes along with pork and other seafood items too. 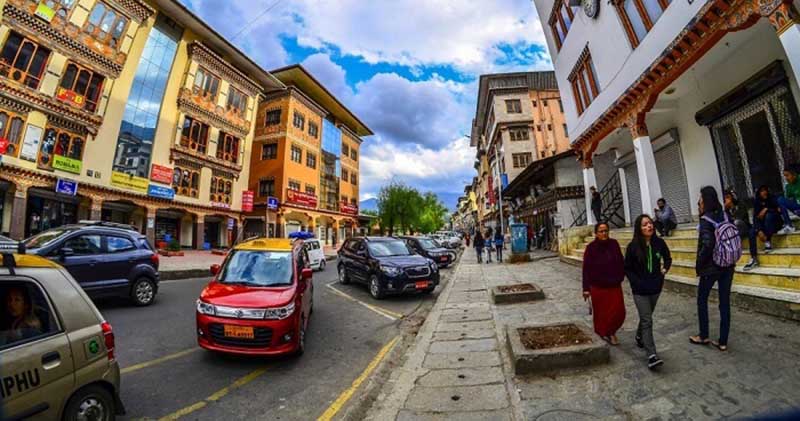 Things To Do In Thimphu

Tashichho Dzong is a remarkable architectural structure which currently is the house of the throne room and seat of the government. More commonly known as the Thimphu Dzong, it is also called the ‘fortress of glorious religion’.

The impressive structure with whitewashed walls, golden, red and black wood and lush gardens on a backdrop of blue sky and flourishing green valleys, emanates a look of splendor. 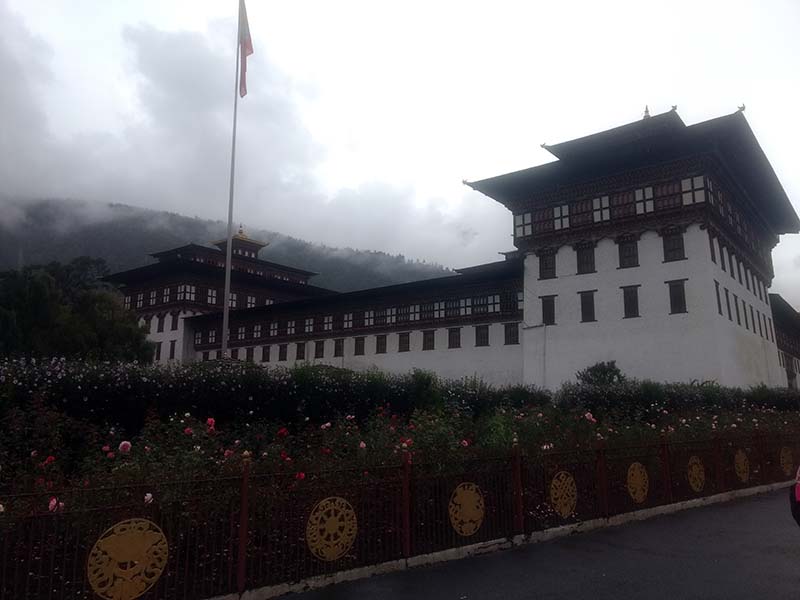 Sitting royally atop a great meditation hall, this Buddha statue exudes peace and tranquillity. It is considered as one of the best places to visit in Bhutan.

Photo: The statue of Buddha sitting royally on top of the peak/CCo

If you want to see a glimpse of Bhutanese traditional lifestyle, their values, and heritage, the Folk Heritage Museum is the ideal place for you. The museum was established in 2001 and is set in a 3 storied timber and rammed earth building which still holds its authenticity.

The museum artifacts transform seasonally. Every time you visit, you will get to see something unique and new.

Called Deh-sho, Bhutanese paper is made from the local trees of Daphne and dhekap trees. The Jungshi factory is reputably the best place that manufactures this type of paper, made using an age-old method instead of the modern way.

Visitors to the paper factory are given a demonstration of the papermaking process, and they are also invited to try their hand at some of the unique instruments.

Photo: Different types of paper at the Factory/CCo

Weaving is one of the oldest Bhutanese crafts, and the Academy, housed in a beautiful contemporary building, attempts to preserve this heritage and also work for the empowerment of Bhutanese women by training them in this much-valued craftsmanship.

The exhibitions here show the various elaborate clothes made for the royal family by workers here. The place is another hidden gem and one of the top things to do in Thimphu. 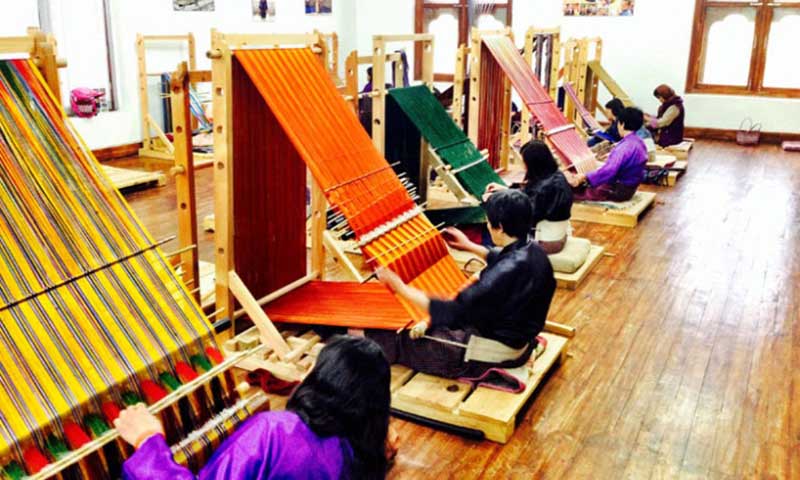 Photo: Display at the Textile Museum/CCo

The National Library of Bhutan, known as NLB, was established back in 1967 and is one of the largest collection of literature on Tibetan Buddhism anywhere in the world.

It has as many as 6100 books and manuscripts in Tibetan and Bhutanese and holds over 9000 printing blocks used to create religious texts. The pretty two-story building is definitely a must visit for the bookworms.

The clock tower, located in the heart of the city of Thimphu, features four different clocks on the four sides of the rectangular column. The walls are carved with beautiful hand carved dragons and some beautiful floral designs, all relating to Bhutan’s reputation as the Land of the Thunder Dragon and its many floral valleys.

Most open-air concerts in the city are held here at the Clock Tower Square so try attending one if you happen to be there at the right time.

Photo: A concert taking place at the clock tower/CCo

Perched on top of a ridge above Thimphu, Changangkha Lhakhang is the oldest temple in Thimphu. The temple was built in the 12th century and houses the central statue of Chenrizig, a manifestation of Avolokitesawara with eleven heads and thousand arms.

It offers a stunning view of the surrounding Thimphu valley from the top. The structure is a fine example of Bhutanese faith, tradition, and architecture. There are a number of black and golden colored prayer wheels in the temple. 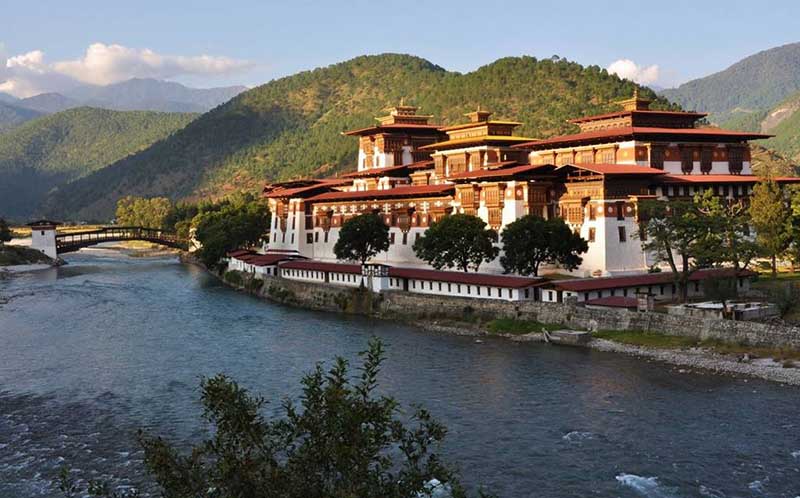 Thimphu, located in the green country is filled with flowing streams, rivers and mountains you can climb.

Dochula Pass is a scenic spot located more than ten thousand feet above sea level while going from Punakha to Thimphu. The place offers a panoramic view of the surrounding snow laden mountains and the breathtaking view of the colorful flags fluttering in the wind and 108 Chortens.

Set around kilometers away from the city center, the Tango Buddhist Institute is a place of serenity. Founded in the 13th century by the much revered Lama Gyalwa Lhanampa, the three-story monastery houses a number of remarkable statues.

The temple can be reached through a half-day hike through the scenic mountains and alpine woods, which is one of the most exhilarating things to do in Thimphu! 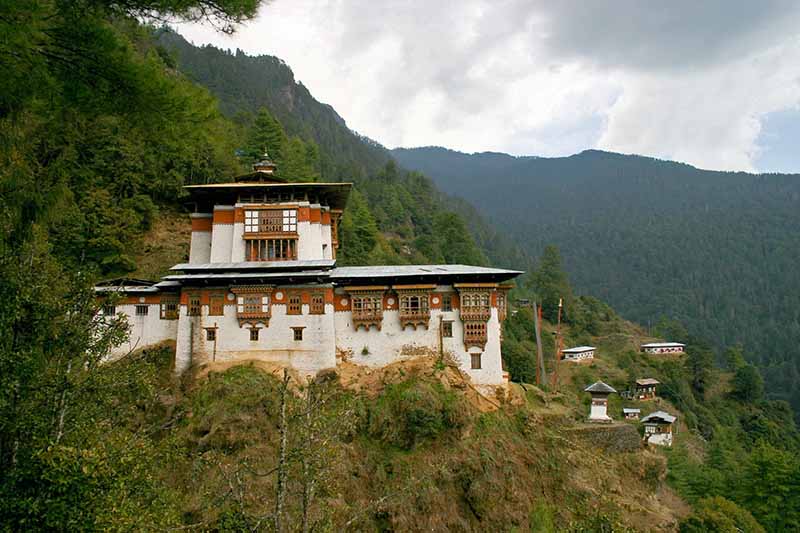 With stalls on both the sides of the Wang Chhu river, the Weekend Market hails vendors from all over the region who start arriving here on Thursday or Friday and remain till Sunday night which is why it has been popularly named as Weekend Market. There is a wide variety of fatty pork, dried fish, and homemade soft cheese.

Not only can this but also during the winter months, shoppers even pick up a leg of Yak. Seasonal fruits like Jackfruit, curly fem fronds called nakey or bananas are available as well. Also, look out for the cereals like tsampa, red rice and ground roasted barley in the cereal segment. 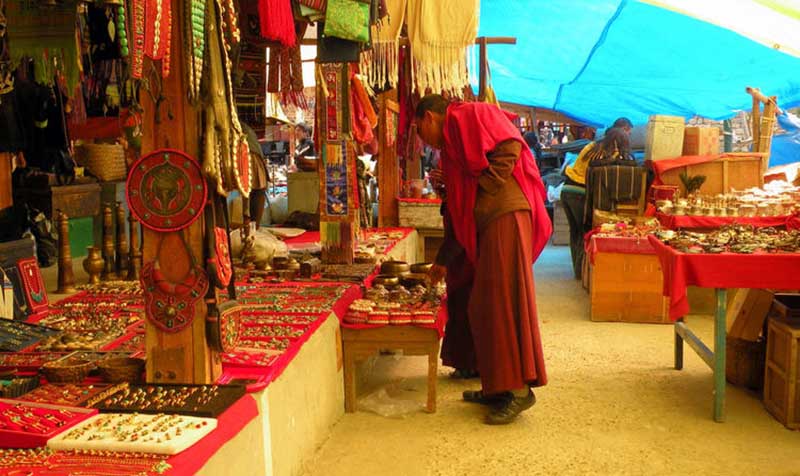 SinceThimphu is a city surrounded by mountains there are numerous small hikes and treks you can do from the city as the base. You can also go rafting in the rivers organized by local organizations.

Some of the good hikes you can take from the city are: 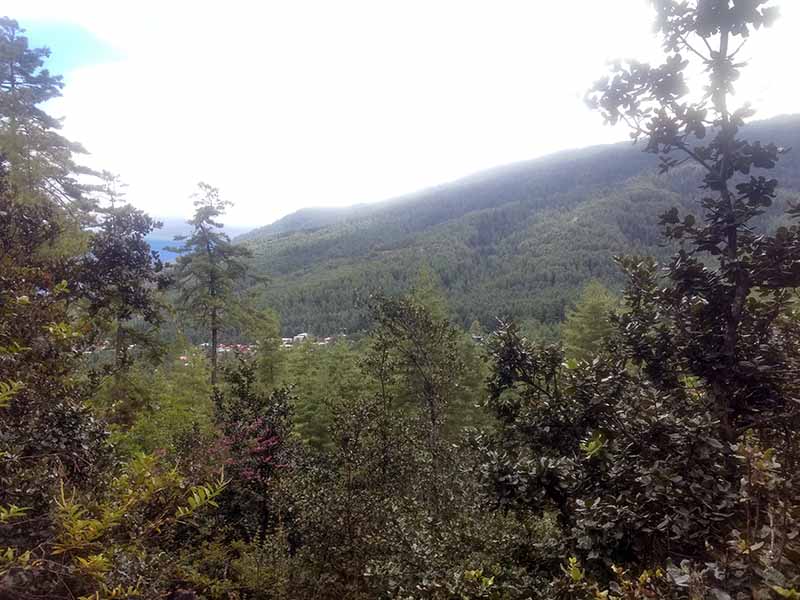 Photo: Greenery everywhere during the Motithang trek / The Art of Travel Partners

This city is a mix of the old and the new and hence has both a nightlife with party and music along with traditional nightlife. It is more commercial compared to other parts of Bhutan but still retains its traditional and cultural charm in the face of modernization.

Some of the happening places to visit are

September to November(4 to 20 degree): The month of September marks the beginning of autumn in Thimphu and is considered one of the best times to visit the city. Visitors are greeted with clear skies and pleasant weather. This is also a great time to enjoy adventure activities such as trekking.

December to February (-10 to 9 degree): Winters in Thimphu are a good time to visit the city as most tourists have left by this time. Days are sunny, though evenings and nights can be very cold. Do remember to carry thick woolens along during this time. This is great weather for adventure activities like white-water rafting and bird watching, too.

March to May(7 – 18 degree): Spring in Thimphu is another great time to visit the city. This time of the year is perfect to enjoy nature since flowers are in full bloom. Bird watchers will also be able to spot the abundant bird life in the region.

June to August(15-28 degree): The beginning of summer in Bhutan brings with it heavy rains. The mountains are cloaked in clouds and look absolutely surreal! Since this is the wettest time of the year in Bhutan, make sure you carry an umbrella along.

You’ll eat ema datshi not only every day when you’re in Bhutan, but likely for just about every meal when you’re in Bhutan. The chilies, which can be either fresh green chilies or dry red chilies, are sliced lengthwise and cooked with datshi, which is local Bhutanese cheese, and plenty of butter for good measure.

Shakam paa is a wonderful Bhutanese food of dried beef cooked with dried chilies and sometimes slices of radish.

For phaksha paa, slices of pork are stir-fried with whole red dry chilies and sometimes some mountain vegetables as well. The result is another staple Bhutanese dish that goes great with rice and mixed in with some datshi dishes.

Taxi is the main means of transport for tourist. You have shared cabs, taxis for private people and the bus organized by your tour operator. If you happen to be an Indian who can enter the country without Visa and tour operator you can even use the local bus to move from one city to the other.

Generally, your stay will be organized by tour operators when you book the tour. If not you can always check out online options like booking.com and other sites like Make my trip to give you a good offer. Airbnb can also be tried. There are a few luxury hotels too in the city if you are in the mood to splurge.

How Safe is Thimphu

Thimphu is a very safe city and, though crime rates are rising, they are still at very low levels. Barking dogs are an annoyance at night and you should bring earplugs if you want to get an uninterrupted night’s sleep.