Two Volcanic ranges linked by the isthmus of Taravao give birth to the exotic islands of Tahiti in the French Polynesia. It is the biggest of the 118 islands in South Pacific.

Papeete is the capital, and the administrative center. Once sleepy, today its harbor is busy with cargo freighters, copra ships, luxury liners and ocean-going yachts.

There are cafes, shops overflowing with French fashions, shell jewelry and handicrafts and a wide variety of restaurants serving Tahitian, French, and Asian cuisine. Not an attractive city, there are many small shops selling black pearls, small goods, souvenirs.

The marche draws many shoppers for local produce (including fish) or souvenirs. Popular cafe with wi-fi on second floor. Don’t expect many stores to be open after 18:00. What is open are the food trucks by the harbor, some restaurants and bars, and lei vendors. Convenience stores a outside the city center at service stations are open.

Faa’a has the international airport built on the lagoon. Apart from the airlines check-in counters, there is an information counter, a snack bar, a restaurant and vehicle rental offices and shops.

Nearby, in a special Tahitian-style house, artisans sell flower leis and shell necklaces. A fairly large, often grungy area. Home to a large mall, the Center Commercial (i.e., the mall) south of the airport on the main highway and anchored by a Carrefour.

Things To Do In Tahiti 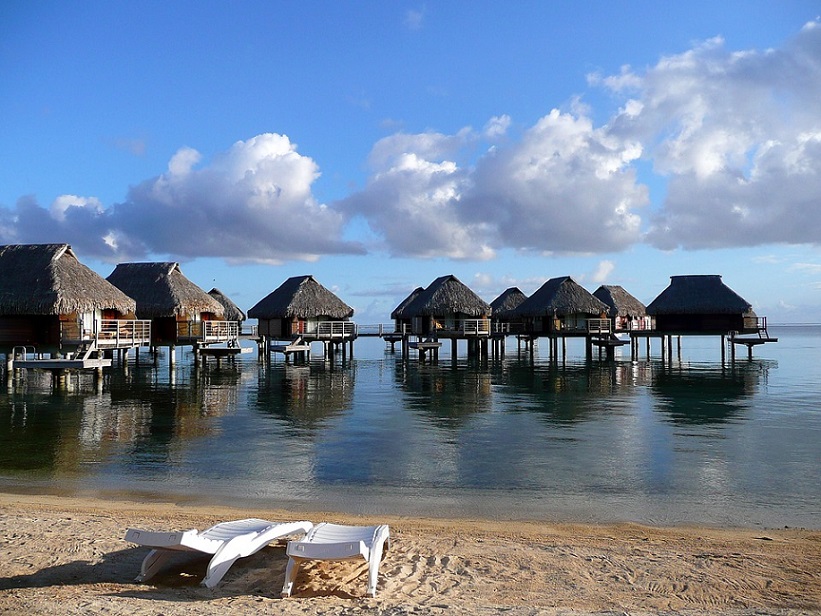 There are many things to do in Tahiti and a lot to see and take pictures of. Should you embark on a circle island trip (of around 70 miles/112 kilometres), some of the must see things would include:

When you walk into this huge market place in Papeete, called La Marche, you’ll see many prospective mementos you can take home.

The Pareu is a multi-purpose clothing, which is shorts, shawl, and a dress, all in one. It can also be spread out as a picnic cloth or a beach towel. Created with traditional designs and bright tropical colors, they are inexpensive and make the perfect souvenir. This is especially good for getting to know Tahitians as every Tahitian knows how to tie one.

But, before you wrap yourself in Pareu try on the scented Monoi oil.

“Monoi” is the local tahitian oil, strongly scented and worth a good price. It is used to get tanned and moisturize your skin.

As a bonus, La Marche marketplace is a great place to get lunch as well.

Le Marche is also the place where you’ll find jeweler as well as many calendars, postcards, cups… Ripe fruits, scented soaps, vanilla beans, dance costumes, woven hats and bags and shell necklaces up to your ears are what you’ll find in the market. It is centrally located and you can’t miss it.

Located on the North side of Tahiti Nui. An area where a blowhole in the shore has formed on the road and whose waves crash inside the rock cliff.

Three beautiful waterfalls inside the island of Tahiti Nui. The path is presently closed by a rockfall, check with the tourist office on updates or chance going if you are close by. The pedestrian bridge is chained shut.

Tomb of King Pomare the Fifth

Even though Tahiti had a monarchy, there is little or no remains regarding it – but Tomb of King Pomare the Fifth is an evidence of when Tahiti used to be a monarchy.

The Pointe Venus Lighthouse is a famous sight with the black sandy beach with exciting fishing opportunity. It has clear blue water and is also popular with young Tahitians.

At Papeari, on the west coast, the botanical garden made by Harrison Smith lies alongside the Gauguin Museum in the magical setting of the Motu Ovini.

It is interesting to visit the Museum of Tahiti and the Islands which has a rich collection of very old pieces and reconstructed historical scenes. The Black pearl museum as well as the Gauguin museum are fun to see if you want to get out of the heat.

A square with small restaurants (see “Eat”) but also the place to be for the July celebrations with dance and traditional music, the Heiva I Tahiti.

Surfing, scuba diving, snorkeling (most resorts will provide you with the equipment for free), canyoning, stingray and shark feedings, water sports, and kite-surfing.

Use reputable dive company for diving, those with the far out websites are reportedly a bit low on ethics and safety, not well prepared and do not go far past the marina.

On land you also have the possibility of for example hiking, 4WD safari and golf.

You can admire the wonderful layout of this golf course set in the magnificent Atimoana complex which was a sugar cane farmland rum in the 19th century.

You can also take a direct flight to spectacular Easter Island – Tahiti is the only place in the world apart from Santiago de Chile where you can do this.

How To Get To Tahiti

Once you are in the city, getting around is inexpensive by bus or rented taxi.

Holders of a passport from the EU, and most countries of North or South America don’t need to apply for a visa for a stay of up to one month.

French Nationals only require a National Identity Card. However, the Delphine passport is necessary in case of transit via the USA.

Except for nationals of the European Union and aliens holding a 10-year residence card for metropolitan France, all foreigners entering French Polynesia must have a return ticket.

Do not forget to pack cotton clothes because in the tropical weather you never know. November to April is the summer season when the heat gets intense to bear. But the hotel rooms provide air-conditioning as well as ceiling fans.

Tahiti has one of the lowest crime rates within France and its territories. However, petty crime, such as pickpocketing and purse snatching occurs.

As an overseas territory of France, defense and law enforcement are provided by the French Forces (Army, Navy, Air Force) and Gendarmerie.

Be sure to bring jelly-type sandals for walking amidst coral in the water and along the beaches or either old sneakers so you don’t cut your feet on the coral or don’t step on a stonefish.

Encounters with sharks in the lagoon will be most likely when scuba diving or even snorkeling but they are totally inoffensive. So are stingrays. However, be aware of moray eels which hide deep in the corals and whose bite can cause serious injury.

No vaccines are required.

The Type A (Two flat pins ) and Type B ( three flat pins) sockets work in French Polynesia. And plug A works with both of them, so buy an adapter accordingly. Appliances with a voltage of more than 110 V need a transformer to work here.