Kandy, located in the heart of Sri Lanka, is one of those places that leave lasting imprints on the mind and soul of every traveler. The city is made up of mild chants of hymns, soothing charm, and nature’s magical vibes.

Kandy is a bustling city built around a lake in central Sri Lanka. It is listed as a world heritage site by UNESCO and is considered one of the most sacred places of worship in the Buddhist World. It is a mix of beautiful, chaos, loud and peaceful all depending on where you go.

The best way to explore this city is to hire a Tuk Tuk or a taxi and ask him to take you to all the tourist spots of the day which you can cover in a day.

Things To Do In Kandy

Kandy is home to some incredible tea fields and factories so make sure to visit at least one. Some of them are theEmbilmeegama Tea Factory which was founded in 1940. Unique rooms, vast tea estates in the boutique premises, comprise of Ashburnham Estate.

The whole process from picking to packaging takes 24 hours with the majority (apart from picking) all done by large machines.

The temple regarded as one of the most ancient (dating back to 2nd century BC) and prized possessions of Sri Lanka boasts of prehistoric paintings, carvings, and peace. A popular place for spiritual seekers and Buddhists, the cave temple is certainly one of the most sought after place in Kandy.

It also happens to be the Largest Rock Cave Temple in Sri Lanka tucked at a 600 feet high rock with exceptional nature views around it.

One of the major attractions here, this place is unique as it is where they have a relic of the tooth of Buddha. Since ancient times, the relic has played an important role in local politics because it is believed that whoever holds the relic holds the governance of the country.

The temple was built in the 16th century and has had continuous additions throughout the years. 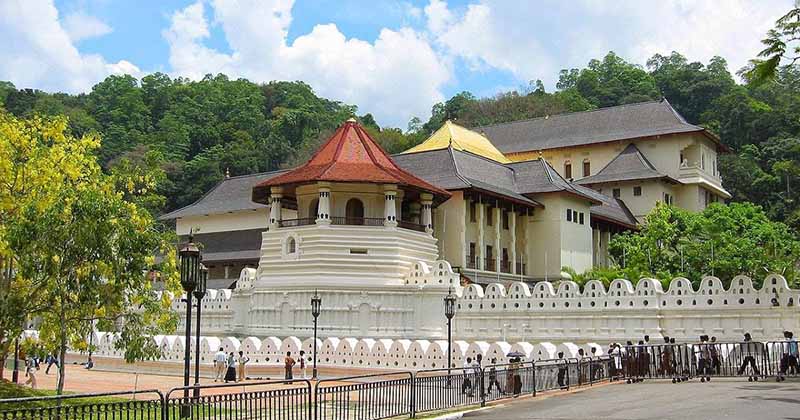 This iconic massive Buddha overlooking Kandy is well worth a visit. A ten-minute tuk-tuk ride from the city center will bring you to this is the ideal place to take panoramic pictures of the historic city. The 80ft Buddha Statue can be seen from almost everywhere in the city.

For a better viewing experience take the twenty-minute climb up the stairs to the Buddha statue. It is really worth it the effort!

13 km to the south of Kandy lies Nilambe Buddhist Meditation Centre – a peaceful sojourn offering daily meditation classes to the seekers and nature enthusiasts. The meditation center is the perfect place for everyone looking to make the best of a memorable holiday in the island nation.

It has a lot of greenery and many buddhist monks around. Nowhere can you get as much comfort as Nilambe Meditation Center. Walk through the sprawling tea estates and boost yourself up. 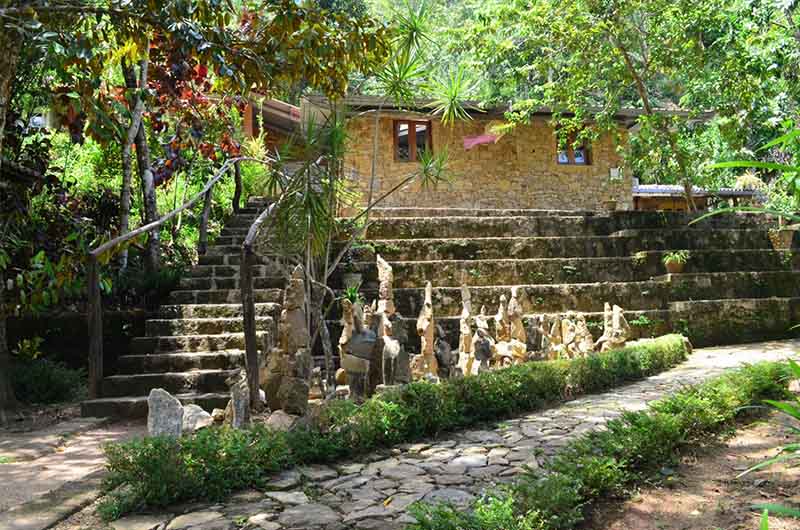 Photo: Calm yourself down with some meditation at Nilambe/ CCo

Kandy is a very cultural city so spend an afternoon visiting one of the many museums it has to offer. The 2 most popular are the World Buddhist Museum and the Ceylon Tea Museum.

The World Buddhist Museum is the only museum which demonstrates the expansion of Buddhism all around the world. Your ticket to the Temple of the Tooth will allow free entry into the Buddhist Museum. 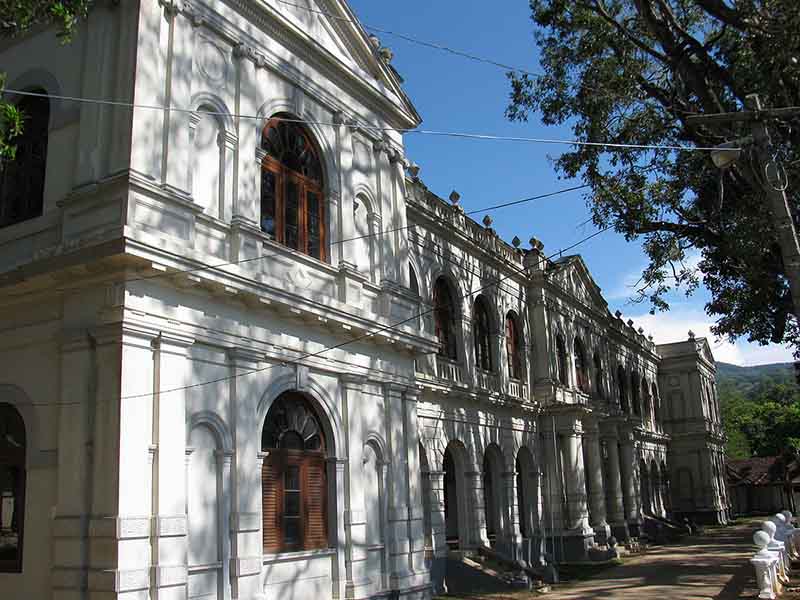 Photo: Visit the museum at the Temple of Tooth/ CCo

Kandy feels like a city developed around a lake so nature feels like an integral part of life here.

Kandy lake, built in 1807 is a man-made lake located in the center of town. It is impossible to miss! There are many walks you can take, such as up to the Royal Palace Park, the Udawattakelle sanctuary. Or you can simply stroll around the lake watching the locals and everyday activities of Kandy.

The Botanical Gardens are Sri Lanka’s largest and most impressive gardens with a staggering 2 million visitors a year.

They’re very well maintained, spacious and boast a huge variety of plants, flowers, bamboo forests, bats, monkeys & birds. The Botanical Gardens are known for its collection of orchids so don’t miss out on them. If you’re feeling lazy, golf buggies can be rented to explore the gardens instead of by foot.

Udawattakele is a 257 acres forest reserve on a hill-ridge in the city. It is famous for its extensive fauna and adventurous bike rides. The reserve also contains a great variety of plant species, especially lianas, shrubs, and small trees. There are several giant lianas.

Many small and medium-sized mammals that inhabit Sri Lanka can be seen here. Udawatta Kele was designated as a forest reserve in 1856, and it became a sanctuary in 1938.

These forest are also of religious importance as there are three Buddhist meditation hermitages and three rock shelter dwellings for Buddhist monk hermits.

With ample shopping options, Kandy City Center and Central Market offer a world of exciting opportunities for travelers. Exploring the local marketplace is certainly one of the best things to do in Kandy. The city center mall distinguished for its ultra-modern features, and unique architecture caters to a major chunk of visitors planning a visit to Kandy.

Apart from well-laid restaurants, supermarkets, and entertainment area the center also has plenty of showrooms featuring designer wears, handicraft stores, and accessories shops. You can also find other popular shopping options in the city located in the close proximity of the Kandy Lake. 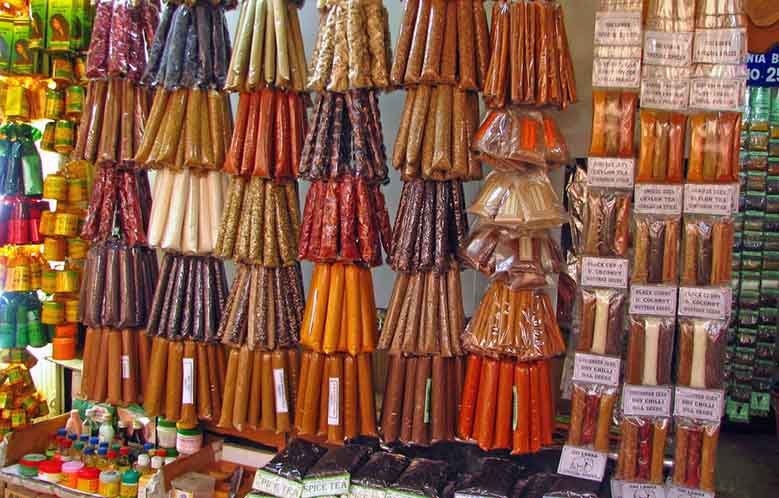 Photo: Shop for spices when in the country/ CCo

This is an ancient Buddhist temple situated in Udunuwara located on Daulagala road. It can be considered as the most magnificent architectural edifice created during the Gampola era. It is a beautiful temple definitely worth a visit.

The history of the temple dates back to the 14th century. According to historical reports this temple was built by King Bhuvanekabahu IV. The king entrusted the construction of this temple to his Chief Minister, who successfully finished the works of this temple.

Photo: The 14th- century temple is a must visit/ CCo

Gadaladeniya RajamahaViharaya is an ancient monastery located 16km from the city. According to an inscription there this temple was built by King Buwanekabahu IV in the year 1344.

The main shrine room has a seated Buddha Statue under a Makara Thorana and four standing Buddha images. The makara thorana is decorated on both faces with gods such as Brahma, Suyama, Santhusuta, Natha and Maithree, and two attendants. 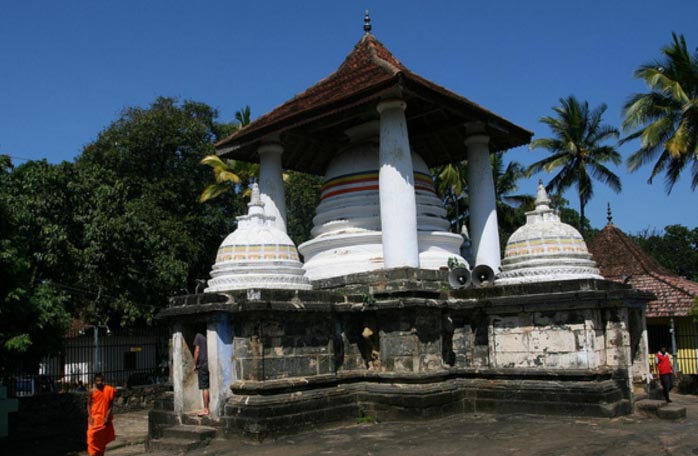 St. Paul’s Church built in the 1940s is located in the main city on sacred grounds west of the Temple of the Tooth. St. With its simple and spacious interior, has been maintained for over 150 years as a fitting memorial to the colonial and multicultural, multi-religious heritage.

It was consecrated in 1853 and was meant to be a symbol of British power. As it was first used by British officials and the British Garrison, it has been called the Garrison Church. 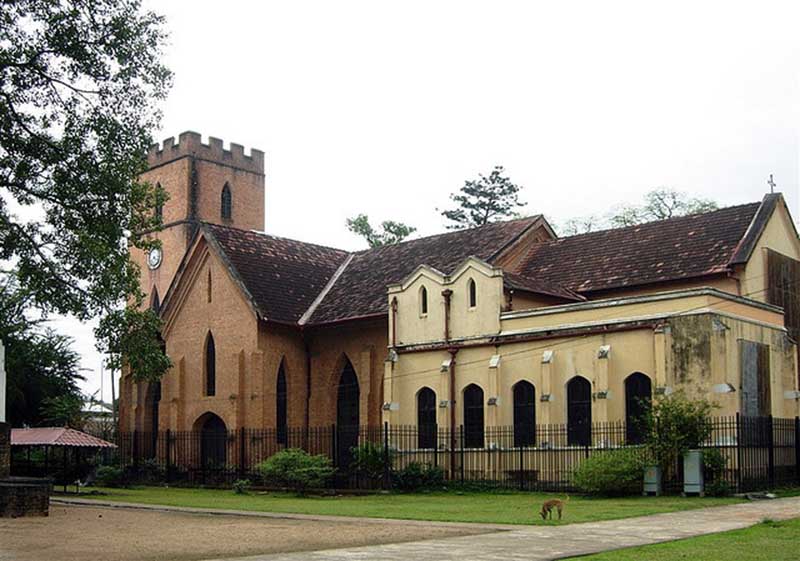 Some of the nice places to eat here are

A very touristic thing to do in Kandy but also very interesting is to see their traditional dancing. Every day from 5-6pm people will gather in a giant hall for the one-hour performance.

The Kandyan Dance is traditionally performed to percussion only, the most common drum is the ‘Geta Beraya’. Overall the production is colorful & interesting, although it can get a bit repetitive. 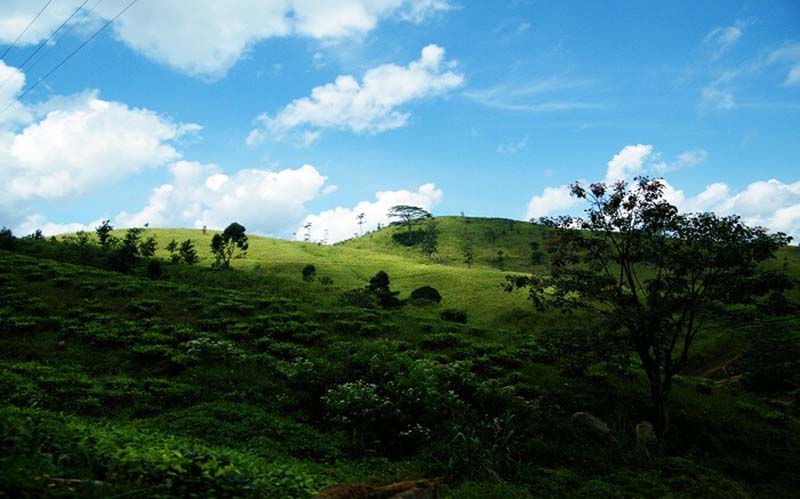 Photo: Go on a trek in the forests / CCo

Kandy has quite a constant tropical weather, but it has 2 monsoon seasons. The dry season in Kandy goes from December to April.From October to November Kandy experiences 2 monsoon seasons, which bring rain to the area.

Since this is the second biggest city in the country, you will find many offers for guesthouses, hotels, homestays and a few hostels. Airbnb also is a good option in the city.

Kandy is a very safe place and more relaxed than the east and north of Sri Lanka. Women, however, should be cautious (especially at night) and kindly deny help when approached by someone. When seeking advice, address your question to local women, which generally are happy to help.