For any visitor to Boston, the Freedom Trail presents the opportunity for an enjoyable and highly informative insight into Boston’s rich history, dating back to the days of the Revolutionary War.

The Freedom Trail is a 2.5-mile red-brick paved walking trail that makes its way to Boston’s most historic sites. During the tour, you will witness a unique collection of churches, museums, meeting houses, burial grounds, a historic ship and as well as several other historical locations. 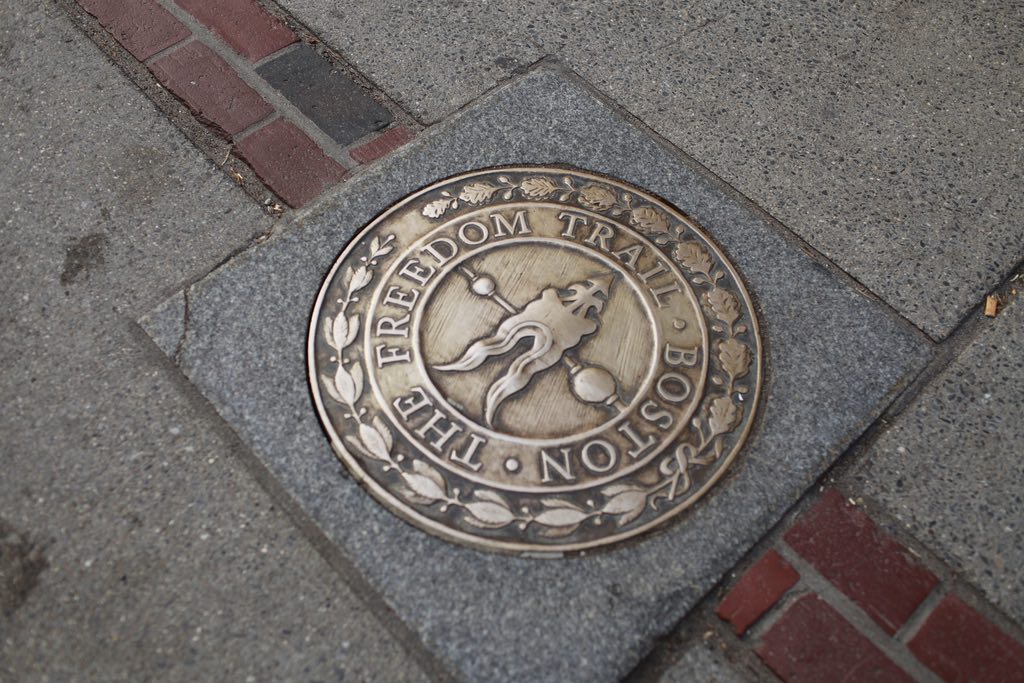 The 17 sites on the Freedom Trail tell the story of the American Revolution as it unfolded in Boston during the 1700s. The walk is worth the time as it provides a comprehensive and rich history of the city of Boston. Most people walk on their own, however, you also have the option of a guided tour for a small fee.

Guided tours of the Freedom Trail depart from the Boston Common (located directly across the street from the Public Garden) daily at 11 am, Noon, 3:30 pm, and 4:30 pm. For more information, see the next section.

On the day of the tour, rangers will distribute free stickers 30 minutes before tour time. Tours usually fill up quickly during summer months.

We recommend walking on your own and exploring the city and each freedom trail stops at your own pace. 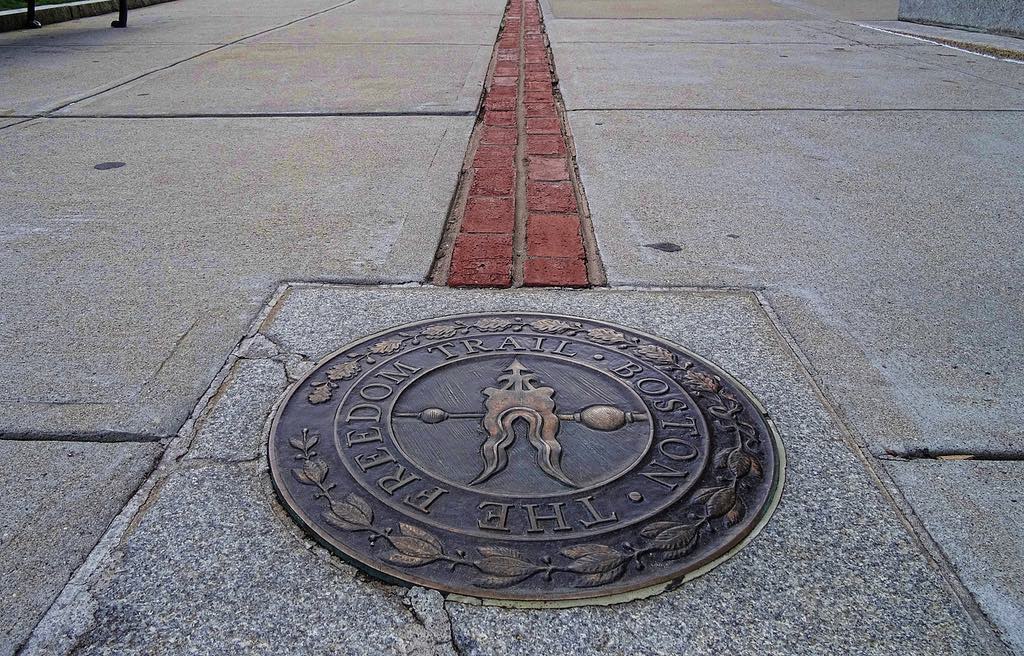 There are 17 stops on the 2.5 miles long Freedom Trail. We’ll start at the trailhead near the Boston Commons Park. This section is for those who want to do a self-guided walk.

Founded in 1634, this is one of the oldest public parks in the United States. Over the years, many large gatherings have been held here, from British encampments in the revolutionary period to anti-war protests in the 1960s. A nice spot for walking around and people-watching at all times of the year.

The Frog Pond in the center of the Common has wading in the summer and ice skating in the winter. (Nearest T station: Park Street or Boylston.)

Founded as an Anglican congregation in 1686. The bell in the bell tower was originally hung in 1772, cracked in 1814, and was recast by Paul Revere in 1816. By the way, the bell is still in use today. Address: 64 Beacon St, Boston. (Nearest T station: Park Street or Government Center.)

Predating King’s Chapel, this cemetery was founded in 1630, and is the oldest in Boston. Notable figures buried here include John Winthrop and William Dawes. (Nearest T station: Park Street or Government Center.)

Both the Boston Latin School and Benjamin Franklin statue stands out in front of Old City Hall. No further words needed to say who is Benjamin Franklin. His face is on the dollar bill that you are carrying right now.

Formerly the home of Anne Hutchinson expelled from town in 1638 for heresy. For part of the 19th century, the Old Corner Bookstore became a meeting-place for such authors as Ralph Waldo Emerson, Nathaniel Hawthorne, and Charles Dickens. Today it houses a Chipotle. Timing: 10:45 AM-10 PM daily.

An important meeting place for centuries. Currently a museum. In 1773, a group of colonists attacked a tea ship after a meeting here, in what became known as the Boston Tea Party. There is a modest fee to enter. Address: 310 Washington St, Boston. Timing: 9:30 AM-5 PM (Apr-Oct), 10 AM-4 PM (Nov-Mar). (Nearest T station: Downtown Crossing or State.)

The former seat of government in Boston, and the oldest surviving building. In 1776 the Declaration of Independence was first read to Bostonians from the balcony. It is still read every 4th of July to a crowd of thousands by the current commissioner of police. There is a modest fee to enter. Address: 206 Washington St, Boston. Timing: 9 AM-5 PM. (Nearest T station: State or Government Center.)

Marked by an array of stones set in the ground directly in front of the Old State House. The actual site of the Massacre (Mar 5, 1770) is perhaps 800 feet east, down State Street, towards Long Wharf. What the city doesn’t want, is hundreds of tourists running out into the middle of the street at all hours, so this location became a nice compromise. Timing: 24 hours daily. 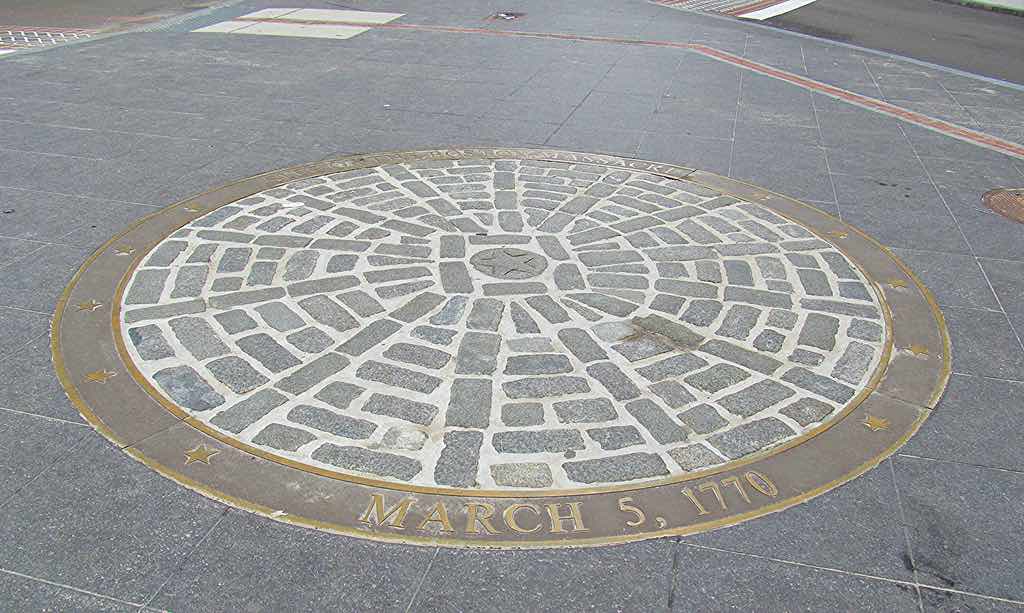 Faneuil Hall, the Cradle of Liberty. First built in 1742 as an old market building at the town dock. Town meetings used to be held here between 1764 and 1774. Samuel Adams and others lead cries of protest against the imposition of British taxes on the American colonies.

Frederick Douglass, William Lloyd Garrison, and Lucy Stone brought their struggles for freedom here in the 19th century. Market stalls on the first-floor service shoppers much as they did in Paul Revere’s day. Entrance is Free. (Nearest T: Government Center, State, or Aquarium.)

Paul Revere is known for his midnight ride from Boston to Lexington, warning all the people along the way that the British were coming. He owned this home for over three decades and it is Downtown Boston’s oldest building, dating back to the late 1600s.

The Old North Church was Boston’s second Anglican church. It is most famous for sending the message from Paul Revere that the British were coming by lighting the steeple with lanterns. Paul Revere had convinced congregant Robert Newman to alert the American militia in Concord, Massachusetts to British troop movements.

Newman placed two lanterns in the church steeple and alerted the militia to the approaching British army as Paul Revere began his ride to warn John Hancock and Samuel Adams.

Historic cemetery in the North End.

The Bunker Hill Monument is for the history buffs. For those who are unfamiliar with the history that dates back to 1775, a short history lesson is given on the site of this revolutionary war landmark.

Climbing to the top of the monument is FREE, but during the months of April, May, and June, a pass must first be obtained from the nearby Bunker Hill Museum, which is issued on a first-come, first-served basis. Timing: 9 AM-5 PM daily (mid-Mar to Nov), 1 PM-5 PM daily (Dec to mid-Mar). 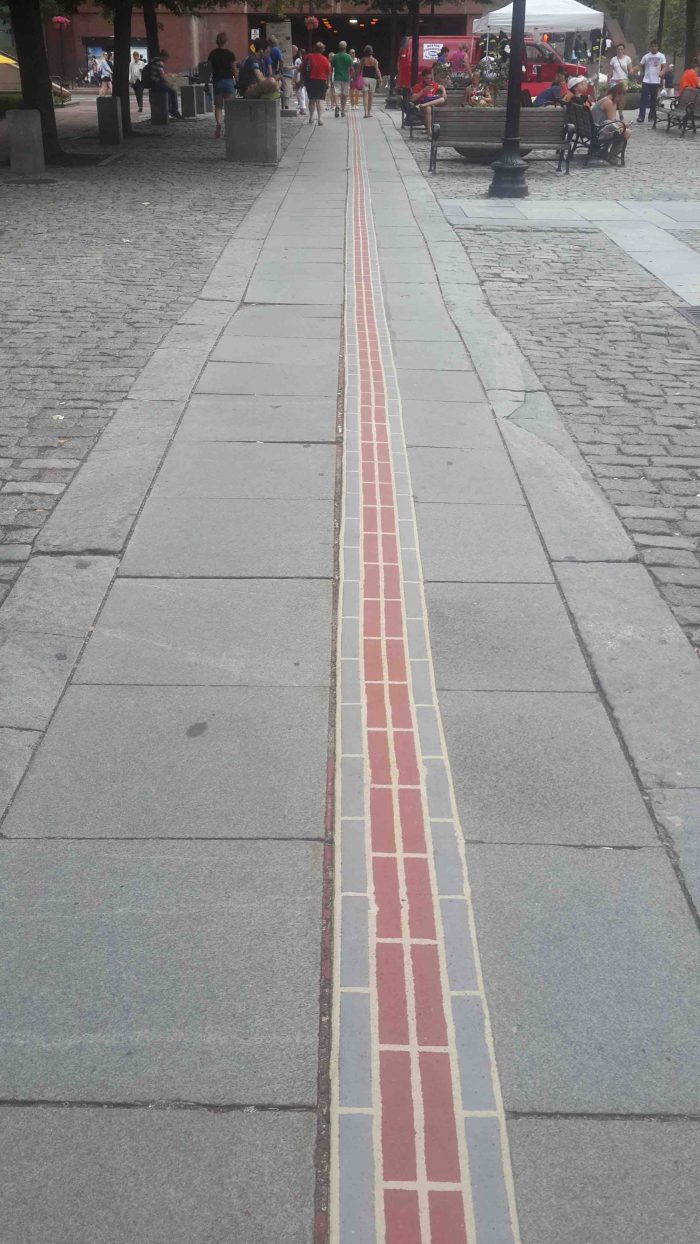 Just follow this paved red-brick road all the way.

If you are starting in the park like everyone else, your best bet is to take the Red Line or Green Line to Park Street station. If you’re going in reverse, try Community College on the Orange Line.

If you are new to driving or have never driven in a busy and congested city, perhaps, it’s best to not drive a rental car. It will not be a fun experience and traffic will be frustrating. But, if you must drive, drive to Boston Commons Park and park your car in the underground parking. Just keep in mind, the parking fee is expensive here (above $20).

The alternative to driving your own car would be to take a taxi or call a ride share service like Uber or Lyft. Ask to be dropped at Boston Common Park near the start of the Freedom Trail.