Sioux Falls is the most popular and largest city in South Dakota. Besides the natural waterfall, the city also acts a midway point between Minneapolis and Rapid City.

This makes the city a convenient stopping point either going to or coming from the most popular tourist destination in South Dakota.

Things To Do In Sioux Falls

The natural wonder that gave Sioux Falls its name, Falls Park offers multiple viewing areas and a five-story observation tower. From there, you can view not only the impressive waterfalls but some of the city’s earliest and most historic buildings.

More than 200 collections dedicated to preserving and interpreting the history and cultures of the Northern Plains. FREE.

More than 500 animals, from penguins to tigers to baby rhinos, inhabit the grounds. There is a ticket.

Open seven days a week, hours vary. Offers visitors a look at more than 145 mounted specimens of mounted wildlife. Admission is FREE with a paid admission to the Great Plains Zoo.

Displays original art by American Indians from the northern plains.

Home to more than 80 hands-on science experiences and the giant-screen Cinedome (IMAX) theater.

Memorial built to honor the most decorated battleship of World War II. FREE.

TheSouth Dakota Symphony Orchestra is an award-winning orchestra whose season spans from Sept to May. They perform in the Great Hall of the Washington Pavilion which is known nationwide for its excellent acoustics.

Sertoma Park is a wide open area with a large number of outdoor activities for all ages. It is also home to a large butterfly house (more than 800 free flying butterflies) that contains both exotic and local butterflies.

There is a large complex right in the middle of the playground areas containing picnic tables, a perfect place for a family to stop and have a snack or lunch.

There are many outdoor trails going throughout and around the park. They are great for bird-watching. The main trail goes by the Big Sioux River, a large grassy field, several ponds, and some woods, and ideal trail for outdoor enthusiasts.

Home to the world’s only Corn Palace, a structure known for attracting crowds since the 1920s, the town of Mitchell is approximately 1 hour west of Sioux Falls. 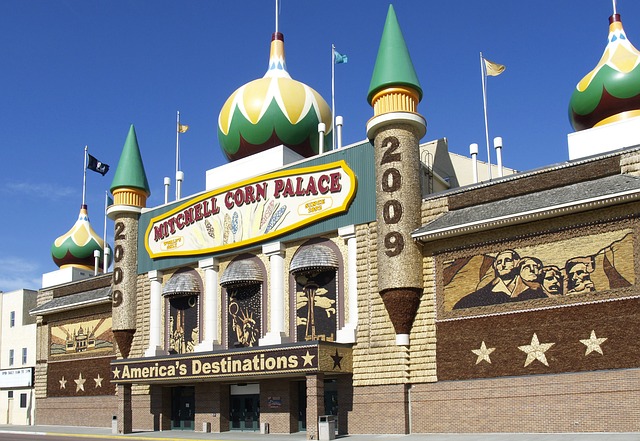 Mitchell is located in the heart of South Dakota, with rich rolling farmland leading into wide open prairies.

The original palace was built in 1892 in order to display the fertility of South Dakota’s soil. The current building is the third incarnation and was built in 1921. Each year a new mural designed by local artists related to life in South Dakota is created on the exterior of the palace.

The murals are created from a lot of corn, grasses, grains, straw, oats, etc. Inside the palace, there is a stage and arena for sporting events. Topped with a whimsical mix of onion domes and minarets, the Corn Palace appears as if drawn straight from a storybook.

Each year there is a Corn Palace Festival that takes place in front of the Corn Palace. FREE.

Palisades State Park is northeast of Sioux Falls. Buy a day pass into the park and explore the beautiful pink cliffs and rocks. You can even rock climb there if you have your own equipment.

The easiest way to get around the Sioux Falls city is by car. Roads are generally well-maintained (with the occasional summer road construction) and traffic is quite light by typical North American standards.

Most of the major attractions, shopping areas, and dining establishments are located near two major east-west roads – 12th Street and 41st Street. Minnesota Avenue also has a large selection of restaurants and shopping places.

Note: Public bus service is available but is limited and slow. Renting a car is the best way to go around the city and to explore nearby attractions. You can’t take a bus to many of the out-of-city attractions mentioned above.

Lyft or Uber, rideshare services, can be also be used to get around the city.