Rising dramatically from the central plains, the enigmatic rocky outcrop of Sigiriya is perhaps Sri Lanka’s single most dramatic sight.

Sigiriya or Sinhagiri is an ancient rock fortress located in the northern Matale District near the town of Dambulla in the Central Province, Sri Lanka.

The palace is located in the heart of the island between the towns of Dambulla and Habarane on a massive rocky plateau 370 meters above the sea level. Sigiriya rock plateau, formed from the magma of an extinct volcano, is 200 meters higher than the surrounding jungles.

The fortress complex includes remnants of a ruined palace, surrounded by an extensive network of fortifications, vast gardens, ponds, canals, alleys, and fountains.

The surrounding territories of Sigiriya were inhibited for several thousand years.

The main entrance is located on the northern side of the rock. It was designed in the form of a huge stone lion, whose feet have survived up to today but the upper parts of the body were destroyed.

Thanks to this lion the palace was named Sigiriya. The term Sigiriya originates from the word Sihagri, i.e. Lion Rock.

According to the ancient Sri Lankan chronicle the Culavamsa, this site was selected by King Kasyapa (477 – 495 CE) for his new capital. He built his palace on the top of this rock and decorated its sides with colorful frescoes.

On a small plateau about halfway up the side of this rock, he built a gateway in the form of an enormous lion. The name of this place is derived from this structure — Sīnhāgiri, the Lion Rock. The capital and the royal palace was abandoned after the king’s death. It was used as a Buddhist monastery until the 14th century.

The Sigiriya site contains the ruins of an upper palace located on the flat top of the rock, a mid-level terrace that includes the Lion Gate and the mirror wall with its frescoes, the lower palaces located behind the lavish flower gardens, and moats and ramparts which protected the citadel.

The site was both a palace and a fortress. The upper palace on the top of the rock includes cisterns cut into the rock. 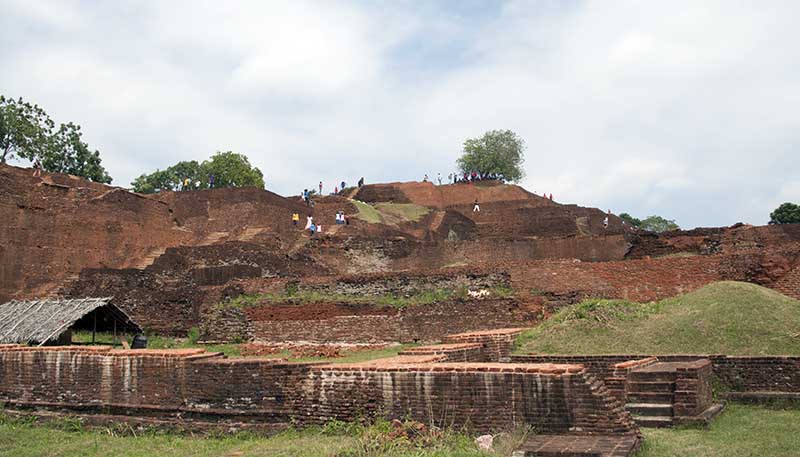 Photo: On top of Sigiriya/ The Art of Travel Partners

As quoted by an archeologist “The whole face of the hill appears to have been a gigantic picture gallery, the largest picture in the world perhaps”. Sigiriya is an abode of frescos. The paintings would have covered most of the western face of the rock, an area 140 meters long and 40 meters high.

However, most have been lost forever. More frescoes, different from those on the rock face, can be seen elsewhere though.

The true identity of the ladies in these paintings still has not been confirmed. There are various ideas about their identity. Some believe that they are the ladies of the king’s while others think that they are women taking part in religious observances. 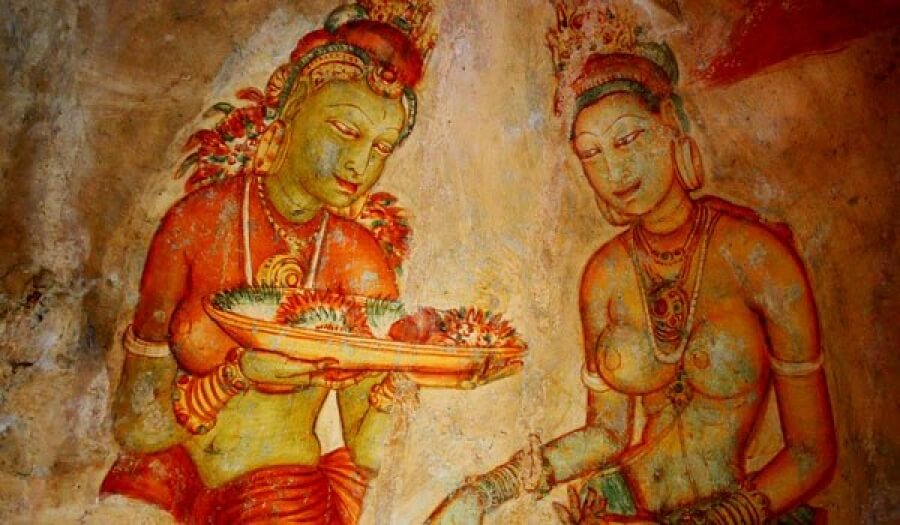 The morning time is best, as it is much cooler than it will become at midday. The ideal time would be to arrive about half an hour after they have officially started letting people in. That way, you avoid walking up behind large crowds.

How much time is required

Around an hour or maximum two depending on your speed. However, if you head up during peak times, you might take a bit longer. Especially if you want to see sights along the way and stop for photos.

Throughout most of the year, Sigiriya Rock is open from 7 am till 5:30 pm. So you can try getting in by 7 and spend as much time as you want up there.

Where to stay in Sigiriya

As long as you head up early before it gets too hot, then most people should be able to climb it without feeling too tired. The only tricky part is the last ascent when you go up metal stairs. These can be a little treacherous when wet, so some might find this a bit daunting.

Photo: Stairs which were first used to climb during the older centuries/ The Art of Travel Partners

Pidurangala Rock is hard to miss, as it’s situated right next to Sigiriya Rock! However, it is in itself a very impressive sight to behold. It is almost as high and also offers breathtaking views out across the surrounding forestland.

Many people choose to climb Sigiriya Rock early in the morning and then walk up Pidurangala Rock to catch the sunset.

Often overlooked this rock lies 2 km away from Sigiriya. It earlier used to be the abode of monks but gained prominence under King Kasyapa 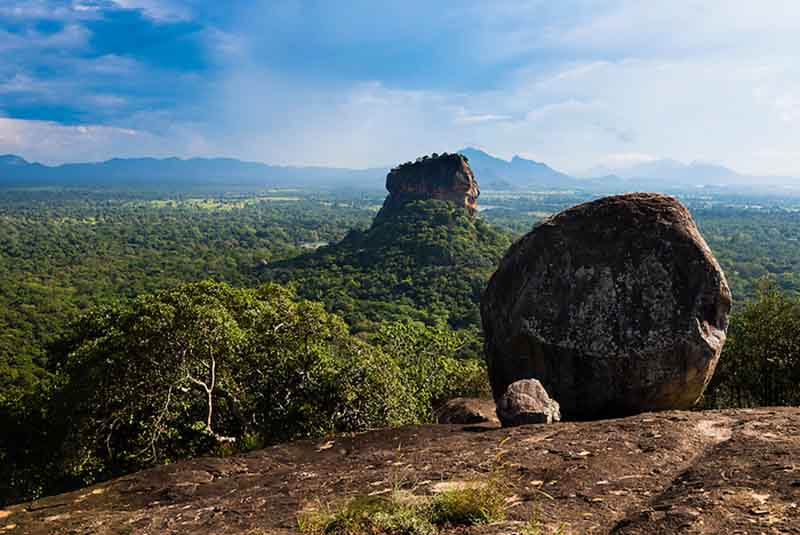 Three of the largest National Parks in the country are located in the Sigiriya Area, and they also happen to be the best places to do an elephant safari. Jeep safaris, where they fit 4 – 6 people in the jeep, costs about $30 per person and can be booked locally or through your hotel.

The journey in a bus can be rather tiresome considering there’s no direct bus straight to Sigiriya. So though there are public buses and it is a cheaper option it will take more time to reach and you will have to change buses.

The closest railway station to Sigiriya is at Habarana, 15km away. There’s only one train that runs back and forth daily, so this makes things a little inconvenient unless you time your trip accordingly. Note that taking the train is also the slowest way to get there.

Cinnamon Air operates daily flights from their domestic terminal in Katunayake to the Air Force airstrip in Sigiriya. At USD 223, it’s the most expensive way to get there but the experience you get up in the sky is unlike any other. 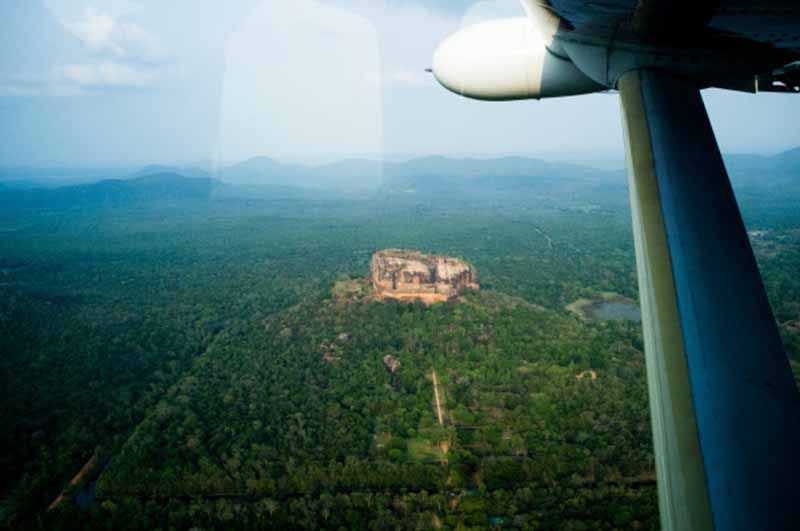 Photo: View of Sigiriya rock from a plane/ CCo

In Sri Lanka the standard voltage is 230V, and the socket Type C, D, and M. You need a voltage converter as well as an adapter. You can also try a combined adapter/ converter.

How safe is Sigiriya

As most of Sri Lanks, it is pretty safe for you to travel as long as you take precautions and are aware of your surroundings. Keep hydrated as the heat can get to you and be careful when choosing local restaurants to eat.