In the far west of Indian state of Gujarat is the lost city of Junagadh. Once a thriving city, Junagadh now carries the skeletons of history. The fort walls of Uparkot bind the lost city together. Furthermore, the Asiatic lions at the Gir National Park are the only survivors of their kind.

Towering over the city is Mt. Girnar, a holy site for Hindus and Jains that is climbed by a 9999-step staircase along peaks studded by temples that reach for the sky and look out across the plains. Walking up these stairs in pilgrimage is a unique experience of striving towards the heavens. 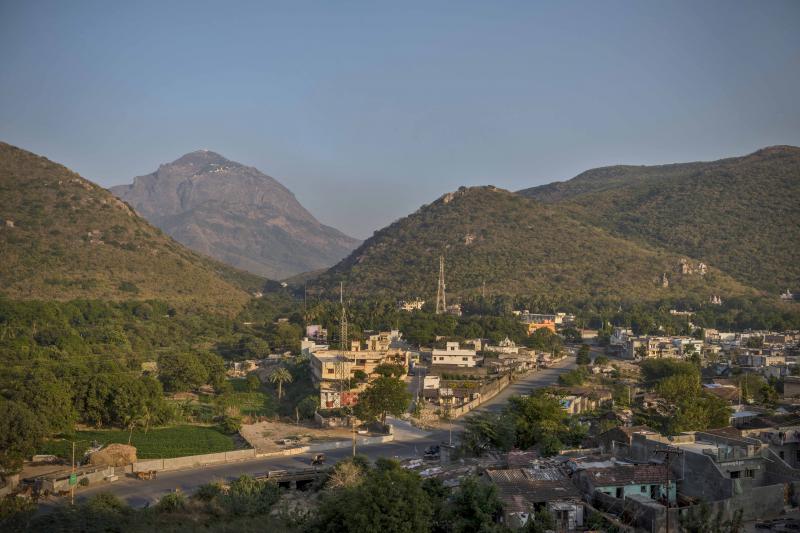 The city of Junagadh

Things To Do In Junagadh

Many worthy places await you inside the complex Junagadh Fort. It takes about 3 hours to see all these attractions. The Jamia Masjid, the Khapra Kodia Caves, and the Mausoleums of Mughal Kings are beautiful ruins to explore. Other than the Fort there is the Holy Hill of Girnar; trekking here is a joy.

Towering over the city is Mt. Girnar, which is a holy site for Hindus and Jains. It is climbed by a 9999-step staircase along peaks studded by temples that reach for the sky and look out across the plains. Walking up these stairs in pilgrimage is a unique experience of striving towards the heavens. 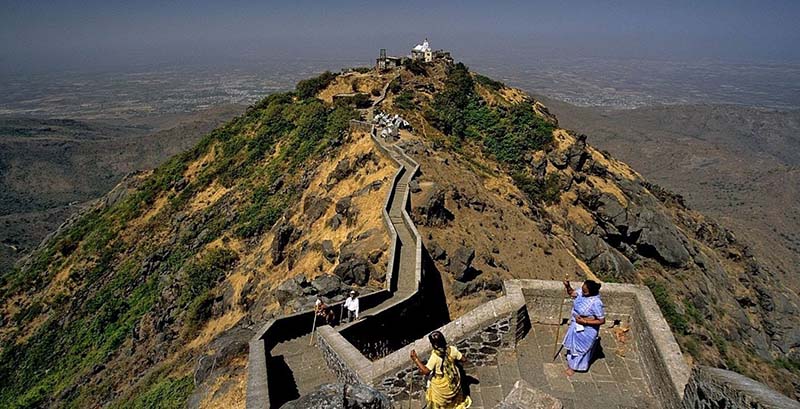 With its unique architecture, it houses the tombs of Mohabbat khanji and Bahaduddin Hasainbhai.

This monument is a unique example of Indo-Islamic and Gothic architecture with finely designed arches, elaborate stone carvings on the walls and windows, silver-decorated portals, the winding staircases encircling its four tall minarets, the old step-well in the grounds and its onion-shaped dome.

The fort is over 2300 years old and has walls towering up to 20m high in some places. There used to be a 300 ft. deep moat inside the walls which used to be swarmed by crocodiles for the fort’s protection.

Neelam and Manek, forged in Cairo and brought by the Turks are the two major tourist attractions in the fort. Also, worth visiting are the step-wells and caves in the fort complex.

At the base of the mountain, deep in the heart of the oldest quarter of the city, you can walk down into the depths of the earth in a pair of ancient step-wells that were dug out of solid rock.

Spiraling down the staircase of thousand-year-old Navghan Kuvo, plunging 170 feet into the heart of solid rock to find life-giving water at the bottom, is an unparalleled contact with the elements that sustain us. 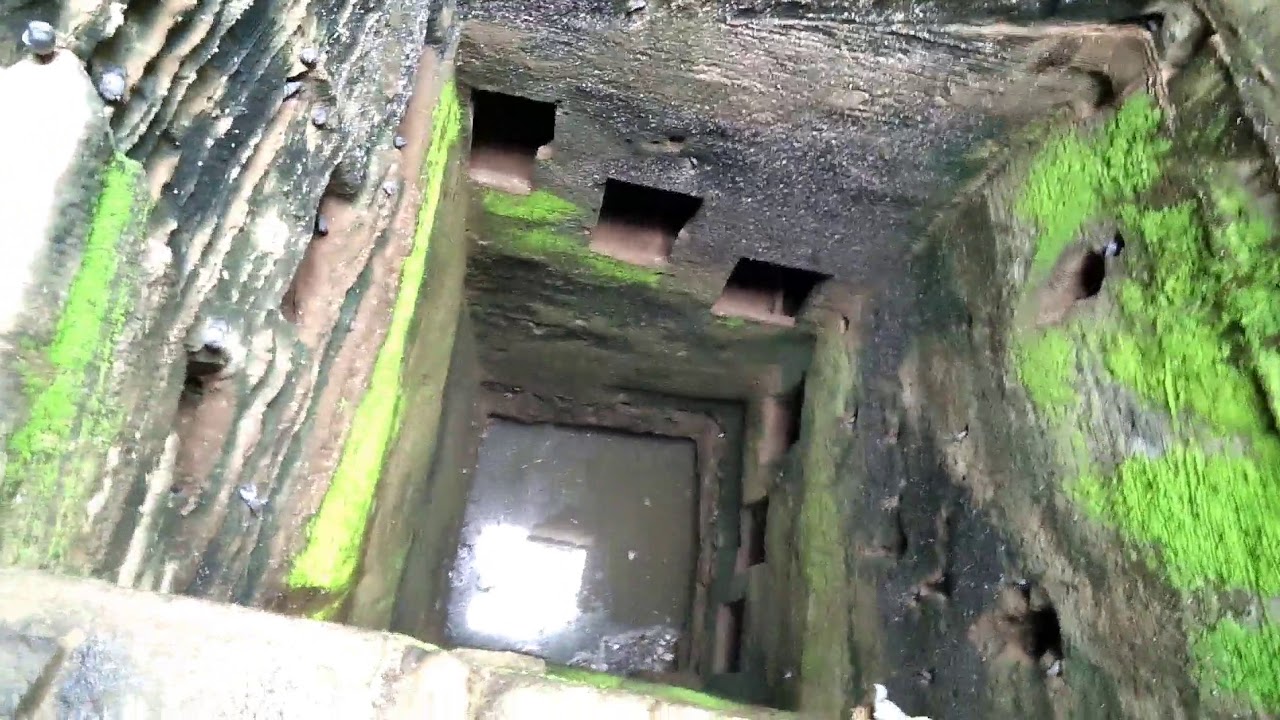 Edicts which are orders issued by royals are present here dating back to 250 BC. There are 14 Edicts of Ashoka inscribed in large granite stones. The edicts, written in Brahmi script preach the ideas of love, peace, and tolerance, and apply to persons of any faith.

The scriptures were carved into stone by an iron pen, and have knowledge of significant historical importance. Today, the rock edicts are enclosed by a modern white building, thus keeping them safe.

The Neminath Temple, built from 1128 AD to 1159 AD, is one of the main attractions. The temple complex has quadrangle courtyards, corridors, and other shrines as well, with pillars adorned with intricate carvings of Jain Tirthankars.

The idol of Bhagwan Neminatha here is said to be one of the oldest in the world, approximately 84,785 years old 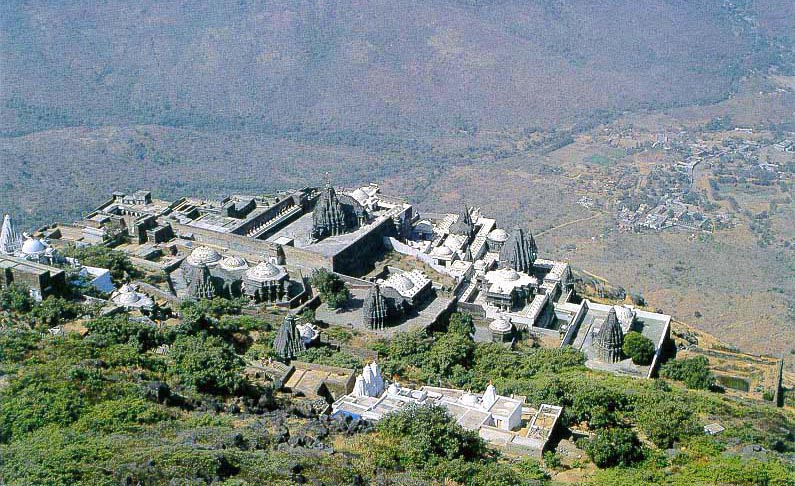 What was once a residential palace of the rulers of Junagadh is now the magnificent Darbar Hall Museum exhibiting the splendid possessions of the 19th century Nawabs. The repository has several galleries exuding with opulence and grandeur, decked with palatial rooms, goods, weapons, palanquin, etc. 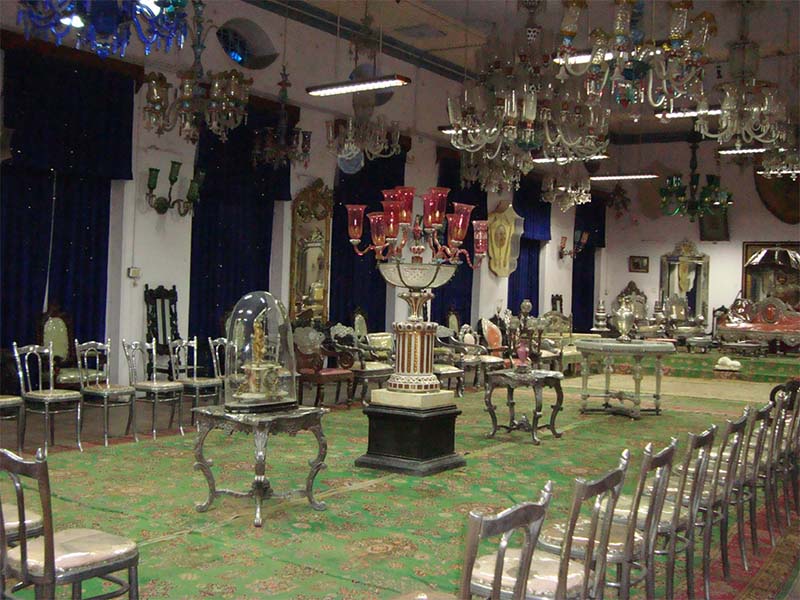 These are more like rooms carved out of stones and used as monk’s headquarters. The oldest, the Khapara Kodia caves belong to 3rd-4th century AD and are the simplest of all cave groups.

They were carved into living rock during the reign of Emperor Ashoka and are considered the earliest monastic settlement in the area. Another set of caves, Baba Pyara caves lie close to the Modhimath, which has four caves in its northern group. 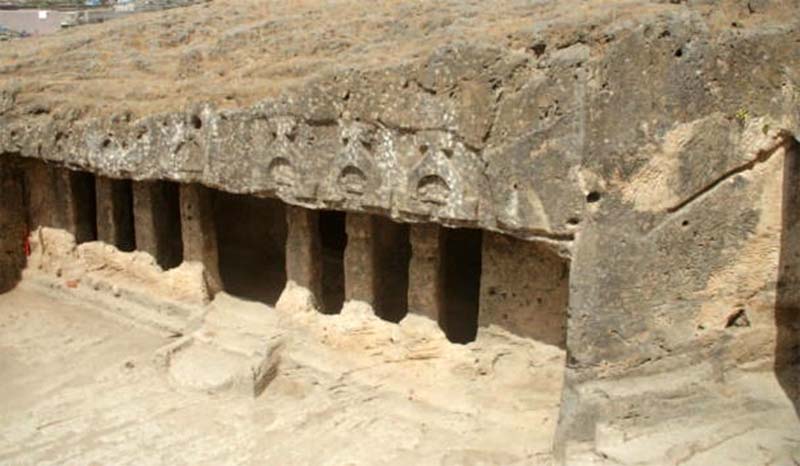 Wellington Dam, built over the Kalwa river at the foothills of Mountain Girnar is a beautiful tourist spot. The water from Wellington Dam is used for commercial and domestic places in Junagadh and adjoining villages.

The best time to visit is during monsoon when the rains fill it up and water gushes through the dam and the trees are all green. 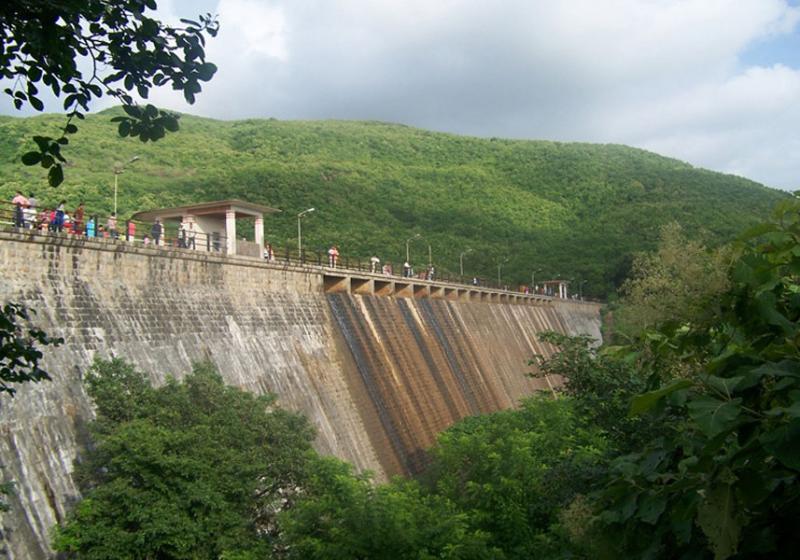 Though it is about 100 km away from the city center, it is a beautiful place to relax and get away from the city. After visiting all the pilgrimage sites you can head towards the beach to spend a quiet evening listening to the waves lashing against the shore. 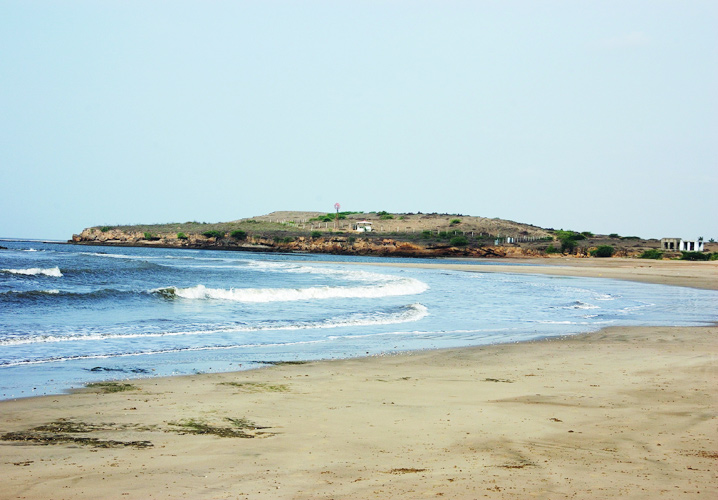 Situated on the Junagadh Rajkot Highway, Sakkarbaug Zoological Gardens/Junagadh Zoo is a massive zoological park in Junagadh popular for the purebred Asiatic lions. It also includes a variety of animals and birds like wild boar, blue bull, antelope etc.

Present inside the premises of Junagadh Agricultural University, Moti Baug is a botanical park known for its verdant greenery and lush gardens. The park also has a pond and a variety of shrubs and flowering plants. People mostly visit the garden to exercise, jog or just to sit and spend an evening.

Madhavpur is a stunning beach in Madhavpur around 75km from the city center. It is lined with gorgeous coconut trees and boasting of an ethereal landscape. The other side of the beach, across the road, has green grass and vegetation which makes the area look even more pleasant. The beach is not considered ideal for swimming though.

If you are out Shopping in Junagadh don’t look for a looming 7 storied shopping complex where attendants will greet you with immaculate manners. This quaint ancient town doesn’t have the westernized exterior of some metropolitan cities.

The shops that throng the marketplace and bazaars in Junagadh are small, some even makeshift, and some roadside establishment. That is the main charm.

Some of the items you can pick up as souvenirs are wall hangings, bandhni saris, cloth toys, devotional items, embroidered clothes, and silk saris. Bargain to get the best of the deal. Stroll along leisurely in the bazaars and roadside shops in the hub of the city to check out the items on offer.

While you are on a Shopping spree in Junagadh keep a lookout for items like Ayurvedic medicines, footwear, herbal remedies, incense stick and oil, devotional items, and mementos of Junagadh carved in marble or wood.

Situated in Uparkot area, Jama Masjid is a trademark monument of the city. Built in yellow sandstone, the mosque has a spacious courtyard covered in white marble and a huge ablution tank in the premises. The inner walls have intricate carvings and the central dome is carved in the shape of a lotus flower.

Situated on the top of the Girnar Hill, Goddess Ambe Temple or Ambe Mata Temple is a famous Hindu temple and an important pilgrimage site for the Hindus. Dedicated to the Hindu Goddess Ambe Ma, the shrine is mostly visited by newlywed couples.

Jatashankar Mahadev Temple is a Hindu temple situated on the rear side of Mountain Girnar. The temple is enshrined by God Shiva in the form of his Shivalinga which is naturally bathed by a stream flowing along and its water falling on the idol itself.

Located on the top of the Girnar Mountain, Dattatreya Temple is revered Hindu temple dedicated to the holy trinity of Brahma, Vishnu, and Shiva collectively known as Dattatreya or Datta. But you can only reach it by scaling the mountain height on foot which is a difficult trek. 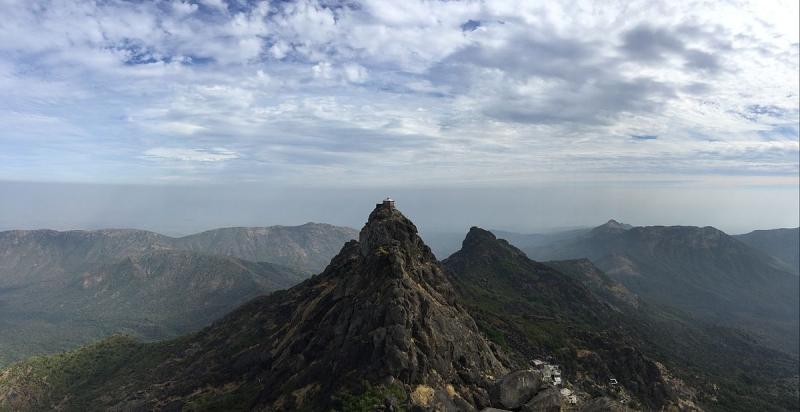 At the base of Ashwatthama Hill in the Girnar Mountain alongside a holy water pond called Damodar Kund is where you can find the temple. The temple is enshrined by Lord Krishna and is surrounded by natural beauty lush greenery. The premises also have a gaushala to tend to cows.

Reaching Junagarh is easy once you reach Rajkot. You can take a flight to Rajkot from any important city. From the airport, you can take a cab to Junagadh. There are also railways all over the country that go to Junagadh Railway Station. Buses also run from Porbandar (the westernmost point of India) to Junagadh.

Visiting Junagadh will force you to deal with the heat as you take a safari, roam the Uparkot Fort and much more. To avoid the sweat and high temperatures winter is a suitable time to visit. Since the heat is low, this is the most popular tourist season.

However, crowds thin during February and March. You can visit during these two months to enjoy the nice temperatures and tourist attractions all to yourself. 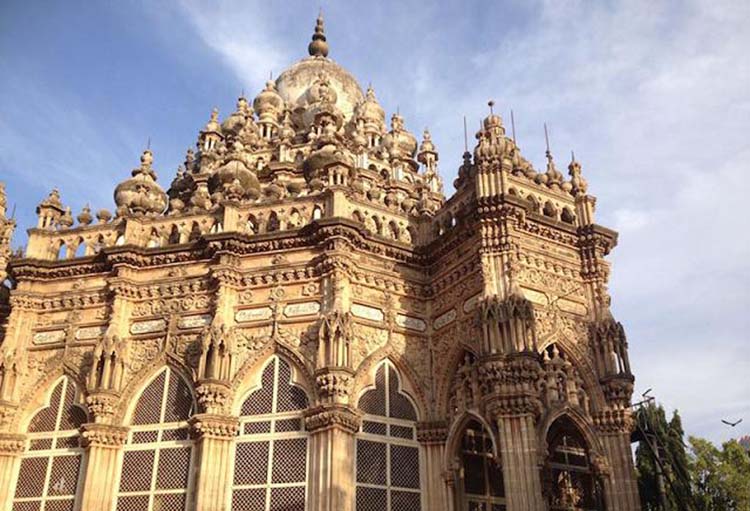