Eastern Bhutan is perhaps the most mysterious part of the kingdom. It is not as visited by tourists and travelers because of the distance from the International Airport found in Western Bhutan, but Eastern Bhutan is idyllic for the adventurer and trekker at heart.

In this part of Bhutan, population wanes and what dominates is a sense of thick conifer forests, deep cliffs and gorges, with unique villages found in areas with the highest elevation.

A journey here will not only expose you to the natural beauty of the regions,  it’s social, cultural, traditional dimensions and some of the oldest spiritual practice in the country but also its unique community of Brokpa in Merak.

Photo: A street at Wamrong/ CC0

Things To Do In Eastern Bhutan

Despite this remoteness, the east is surprisingly densely populated. Most of the population live in remote settlements; secreted high above the road or in isolated valleys, some are home to minority ethnic groups comprising fewer than 1000 people.

Trashigang is one of the most rustic parts of Bhutan. Its commercial areas are not as developed, but what it lacks in amenities, it more than makes up in natural wonders, earning it the name “Jewel of the East.” Its elevation ranges from 600 meters to 4,000 meters above sea level, so pace yourself when acclimatizing.

Other than being the main area of cross-country barter between countries like India and Tibet, the East-West Junction is also one of the principal markets of the Brokpas, a semi-nomadic group whose origin is still being debated. They can easily be spotted because of their unique mode of dressing.

Also called as the Fortress of the Auspicious Hill, it overlooks the Dangmechu River, the longest river in Bhutan. At one time, the fortress was the center of power of all of Bhutan’s Eastern Region.

Inside the courtyard, there is a painting of the yeti, said to roam this area, as well as Choegi Gyelpo, the god of death. Their three-day Tsceshu or festival held sometime at the end of every year is dedicated to Gyelpo or Yama in order to appease him. 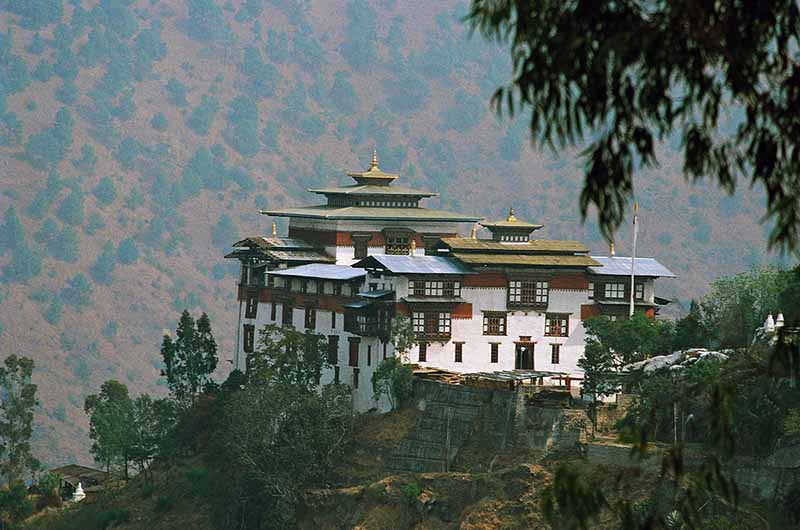 The stupa was built in the 18th century by Lama Ngawang Lodrö, the nephew of Shabdrung Ngawang Namgyal in order to subdue a harmful demon believed to have been living at the site where the chorten is now located.

Mongar offers some of the most outstanding sights in Bhutan. On your way to the town proper, you will be greeted by deep gorges and cliffs, and thick fir forests.

In Mongar, you’ll find the ethereal Rhododendron. Rhododendron is a flowery woody plant that usually signals spring as it blooms from late winter to early summer. At the garden, you will see over 1,000 species and varieties of rhododendrons, collected from all over the world.

Lhuentse Rinchentse Phodrang Dzong, as it is correctly known, sits high on a rocky outcrop overlooking the Kuri Chhu valley, with near-vertical drops on all sides. Renovated several times, the most recent one being due to an earthquake in 2009.

A three-day Tsechu fills the dzong to capacity in December/January. The 100 or so resident monks see few tourists and are very friendly, which explains why visitors here have more freedom to explore than they do in any other dzong in Bhutan.

If you really want to go off the beaten path, Lhuntse is three hours away from Mongar, and is one of the most isolated districts in Bhutan.  There are very few developed roads and only one gas station.

While it is isolated, it holds an administrative significance as the ancestral homeland of Bhutan’s royal family. Must-visits in Lhuntse are Lhuntse Dzong, the administrative and religious center, Kilung Lhakhang, and the Jangchubling Monastery.

There are no paved roads going to Khoma Village. It is a two-hour walk from Lhuntse Dzong. But if you are really into culture and textiles, Khoma Village is a worthy endeavor.

Some of the most talented Bhutanese weavers are found here, weaving the distinct pattern called Kishuthara, the most complicated patterns, which takes about six months to finish.

This art and craft institute south of town was opened in 1997 to provide vocational training opportunities for those who are not continuing in the higher education system.

Ten of the Zorig Chusum (13 traditional arts and crafts) are studied here, including thangka painting, embroidery, sculpture, metalwork, and wood-turning. You can visit the school, watch the students at work and take photographs, though the selection of crafts for sale is rather disappointing.

This is the oldest town in Bhutan, and it is an intercultural mix of Indian, Tibetan, and Bhutanese lifestyles. It shares a border with Assam, India. Since cross-border trade is the main livelihood, Samdrup Jongkhar is a little more developed as a town and was where the British used to hold their forces during the occupation.

Make sure to also visit the Zangdopelri, a collection of statues in the middle of town that serves as the religious center of Buddhist faith in Samdrup Jongkhar.

Trashiyangtse is made up of 1,500 sq km of forest land, the majority of which belongs to the Bomdeling Wildlife Sanctuary. Trashiyangtse is home to Bhutan’s national butterfly (yes, you read that right), Ludlow’s Bhutan Glory, considered as the holy grail for many butterfly enthusiasts, and is found in this region of Bhutan.

The Wildlife Sanctuary is also home to other animals such as the red panda, barking deer, Himalayan black bears, and several big cats like leopards and tigers.

The northern parts include glaciers, snow peaks scree slopes, alpine pastures and scrub and glacial lakes and valleys. The central parts include ridges and valleys covered in scrubland, conifer forest and broadleaved forest. The southern and lower part consists of more ridges, valleys and river gorges.

The best time would be during the months of April, October, November. The beginning of summer, post-monsoon or beginning of winter. The months which are not so ideal for the tourists are January, February, July, August as the weather can be a little harsh.

The diet in the hills also includes chicken, yak meat, dried beef, pork, pork fat, and lamb. Soups and stews of meat, rice, ferns, lentils, and dried vegetables, spiced with chili peppers and cheese, are a favorite meal during the cold seasons.

Zoedoe is another type of cheese made in the Eastern districts, which is added to soups. Zoedoe is normally greenish in color and has a strong smell.

Taxi is the main means of transport for tourist. You have shared cabs, taxis for private people and the bus organized by your tour operator. But most towns in Eastern Bhutan are isolated and you will have to travel on foot to get to quite a few destinations apart from the major towns.

The roads are dirt roads and you should be up for a bumpy ride for most parts of it.

Generally, your stay will be organized by tour operators when you book the tour. If not you can always check out online options like booking.com and other sites to give you a good offer.

Most stays are in simple farmhouses or homestays as the Eastern part of Bhutan has not yet been developed for tourism.

How Safe is Eastern Bhutan

Bhutan is a very safe place and, though crime rates are rising, they are still at very low levels. Barking dogs are an annoyance at night and you should bring earplugs if you want to get an uninterrupted night’s sleep.