The ruins of Anuradhapura in Sri Lanka are one of South Asia’s most evocative sights. This destination is visited in large number by the people of Buddhist religion and is the major Buddhists pilgrimage’ spot in the nation.

Today, several of the sites remain in use as holy places and temples. Frequent ceremonies give Anuradhapura a vibrancy that’s a sharp contrast to the museum-like ambiance at Polonnaruwa.

The sacred city of Anuradhapura is made up of monastic complexes dedicated to different sects of Buddhism including Theravada, Mahavihara, and Mahayana. It also has four monumental stupas (Jetavana, Ruyanvelisaya, Mirisavati, and Abhayagiri) 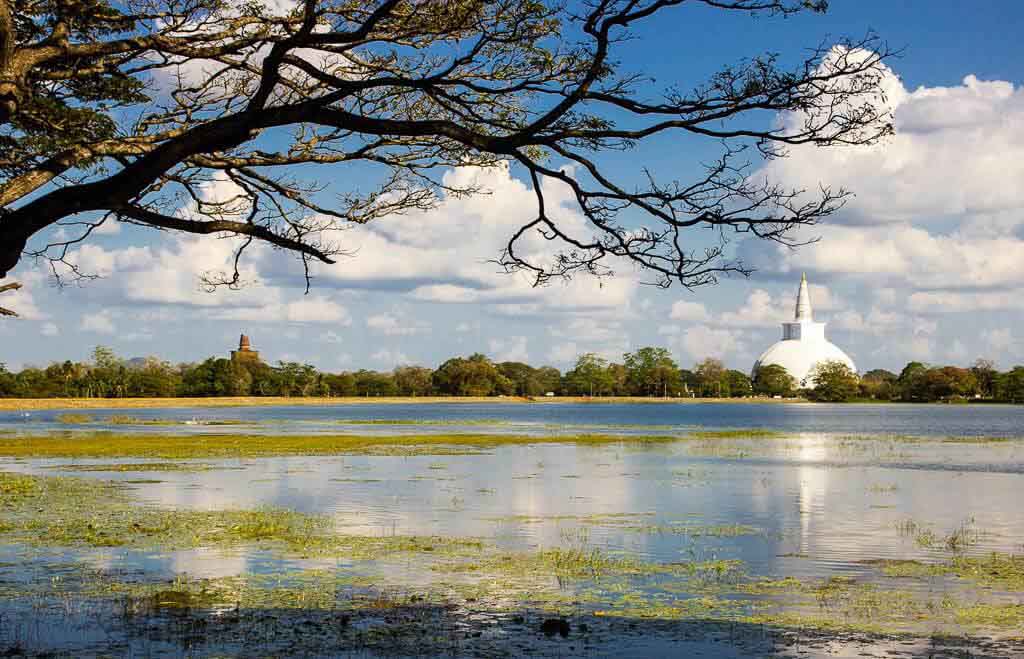 Photo: History and nature combines in this beautiful city of Anuradhapura / CC0

Things To Do In Anuradhapura

The stupa in this monastery complex is the largest stupa here, Spanning 122 m in height and 113 m in diameter, it appears massive. It used to be the centerpiece of the Jetavanarama monastery.

Built with bricks made of sand and clay, the Jetavanaramaya stupa is as much a testament to ancient engineering as it is to spirituality 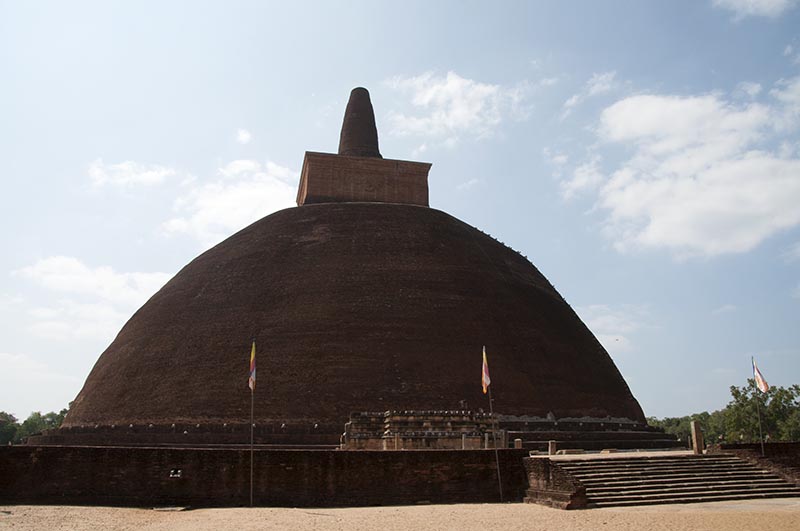 Photo: The massive stupa made with bricks at the monastery/ The Art of Travel partners

The Isurumuniya Vihara is a monastic complex carved out of solid rock. Built by King Devanampiyatissa, it was used to house 500 ordained Buddhist monks or Issira.

Typically, Issira were children from noble families in high castes willing to dedicate their lives to the teachings of Buddha and the path to enlightenment. Once they were ordained, they lived apart from the rest of Anuradhapura society. 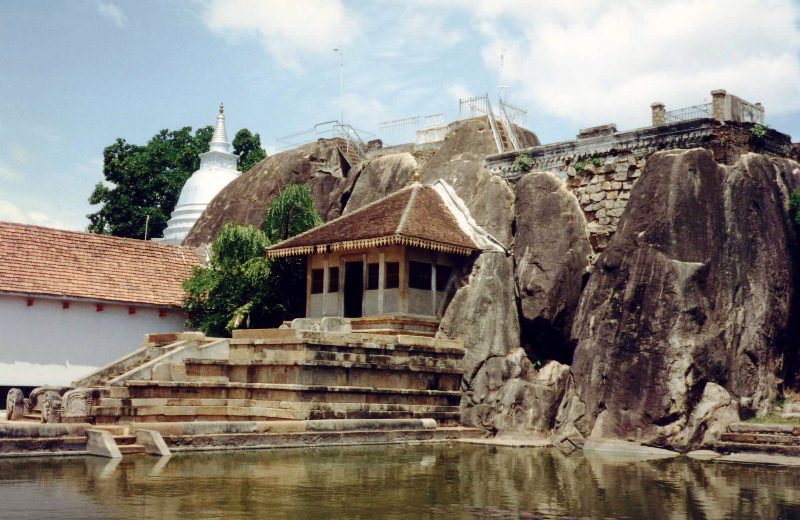 A Sandakada Pahana, or Moonstone, is a distinctive Sri Lankan architectural element developed during the later years of the Anuradhapura Kingdom. Moonstone is a semi-circular carved slab of stone traditionally placed at the entrance of a Buddhist temple.

The Sandakada Pahana at Abhayagiri Monastery dates back to 1st century B.C. A lotus blossom leaf is depicted in the center and is surrounded by rows of animals, each of which represents a stage of life. 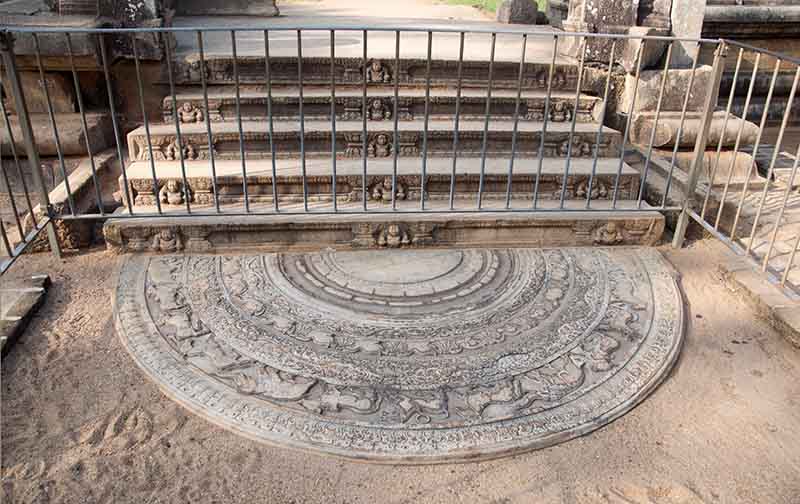 Photo: The moonstone, specialty of the country / The Art of Travel Partners

Located at the north end of Anuradhapura is the Abhayagiri Vihara monastic complex. It was constructed by King Vattagamini in 88 B.C. and had the capacity to house 5,000 monks at a time.

The Anuradhapuran’s were master engineers, which can be seen by their elaborate irrigation systems. The twin ponds here feature underground ducts used to filter, fill, and empty the pools of water. In addition to their impressive plumbing, the design of the pools shows an eye for elegance.

The Ratna Prasada, or Jewel Palace, is a monastic complex built during the 1st century that was used by a sect of monks who practiced Mahayana Buddhism – a split from the Theravada school of thought that dominated Anuradhapuran religious life.

The building, which was an enormous structure in its heyday, was demolished during the Dravidian invasion around the 8th century. It was later rebuilt during the reigns of King Mihindu II and King Mihindu IV. 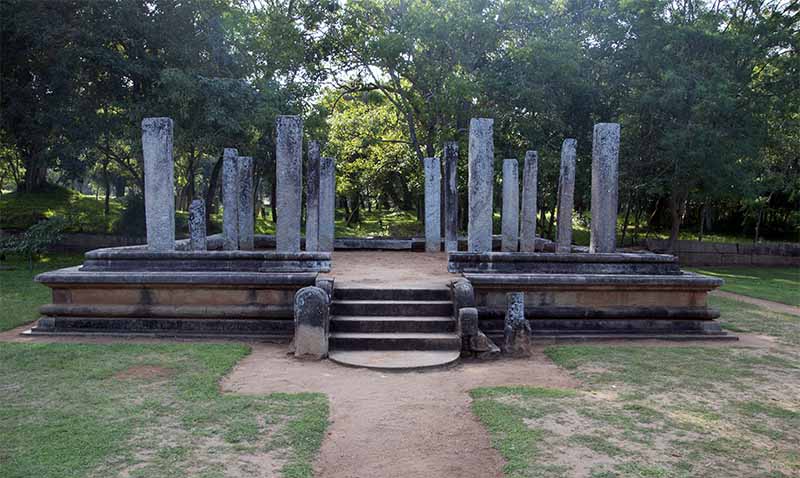 Photo: The ruins left at Ratna Prasada / The Art of Travel Partners

From the Ruwanwelisaya stupa complex, a five-minute walk along a sidewalk promenade, past picnickers and curious monkeys, brings visitors directly to the Sri Maha Bodhiya, or the Sacred Bodhi Tree.

This sacred fig tree was propagated from the original Bodhi Tree under which Siddhartha Gautama achieved enlightenment. Siddhartha Gautama was the young Indian prince who founded the Buddhist religion. He is also referred to as Gautama Buddha or known simply as the Buddha. 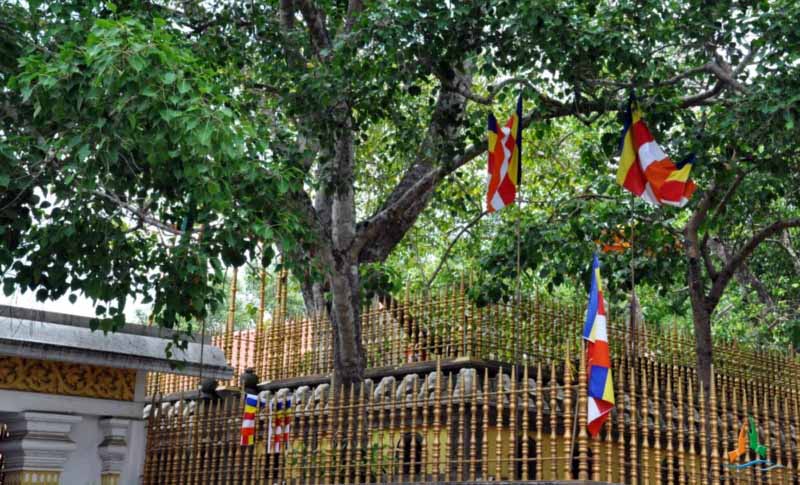 Photo: Bodhi tree, from the original tree where Buddha was enlightened / CC0

Known as the “Great Stupa,” the Ruwanwelisaya stupa is an enormous white structure which is older than the Jetavanarama stupa by over 100 years. King Dutugemunu, who became ruler after defeating King Elara, commissioned its construction in 161 B.C.

The gleaming white monument is quite large, with a height of 91.4 meters and a circumference of 290 meters. It is the second highest stupa in Anuradhapura and continues to be an important place of worship.

Photo: Ruwanweliseya or the Great Stupa / The Art of Travel Partners

Mihintale, or “Mahinda’s Mountain,” eventually became the cradle of Buddhism and Sinhalese culture. For centuries, it was a complex of cave dwellings, monasteries, and stupas used by monks. Thankfully the ruins of some of these buildings can still be seen today, making Mihintale the perfect day trip from Anuradhapura. 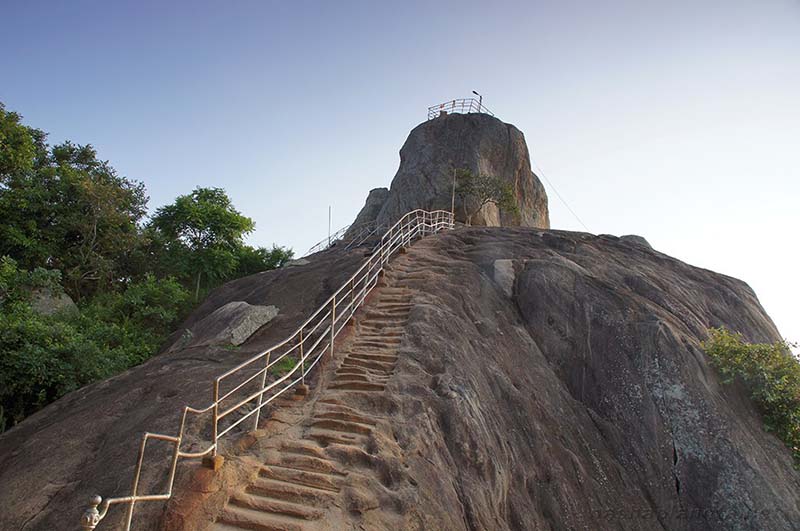 There are many types of outdoor activities that can be done in this historical site. After site seeing, you can go to one of the tour operators to help you in discovering the outdoor sports. Some of the main activities are

Between October and November, sporadic rains occur throughout the country. December through March is the most popular and the driest time to visit.

When traveling between cities, buses and trains are convenient. Buses can be really crowded and are seldom air-conditioned. Though trains are slower and can be crowded as well, they often considered the more comfortable mode of transportation.

When in the city, tuk-tuks, buses, taxis, or simply walking, are all viable forms of transportation. You can also hire cars and drivers for a day or rent a bicycle.

There are several souvenir shops in the Anuradhapura Old Town where postcards and souvenirs are sold. The New Town has clothing stores, supermarkets, and a handful of bookshops