The Ultimate Guide to US National Parks Road Trips Across America

If you are like us, chances are you love road trips and you want to visit all the National Parks in the United States. But, the United States is a vast landmass and if you work a full-time job or run a business, you have limited vacation days. Plus, traveling requires planning and money.

In 2019, we finished our quest to visit all 50 US States as “the First non-US born Couple”. During our 5 years long adventure, we made numerous road trips, drove more than 15,000 miles, visited more than 100 US Cities, and explore over 30 National Parks.

We thought, sharing our journey will be a helpful resource for other wanderlusters who are planning a similar adventure.

Before we jump into the best ways to visit the America’s National Parks and various google maps routes, let’s take a quick step back and reorient ourselves on what is our goal here.

The goal here is to visit most (if not all) of the US National Parks.

There are 61 National Parks in the United States. If you’ll try to drive to all of them in one stretch, it will be more than 15,000 miles of driving and it will easily take you over 3 months. But, we are not going to propose that. Enjoying nature is opposite of rushing!

Therefore, the purpose of this guide is to help you save money and time while enjoying the beauty of the North American continent. It’s not a record making or breaking quest, it’s a carefully thought-out itinerary for anyone who has a busy life and day-to-day responsibilities. Jobs, businesses, family, health concerns, and so on.

Depending on where you live or if you are flying from abroad, you can start anywhere (on any of the loops) and then make your way towards Eastcoast, Westcoast, Midwest, or the South.

Since California has the most National Parks in the contiguous United States, let’s start here.

Below is the trip we planned for ourselves along with our friends who live in the San Jose area. Please note, we live in Boston (on the opposite coast) and the tickets to San Francisco is usually the cheapest among all California airports. So, we made San Fransisco as our start and end point.

Depending on where you are coming from or if you happen to live in California or Oregon, you can tweak the journey to your liking and whatever best suits your situation. 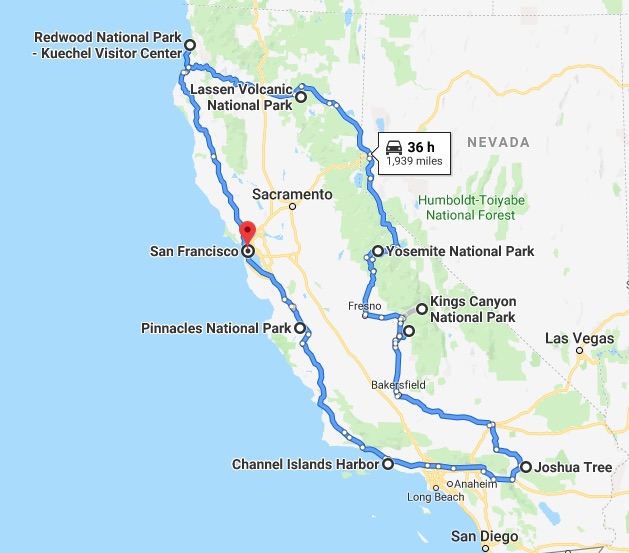 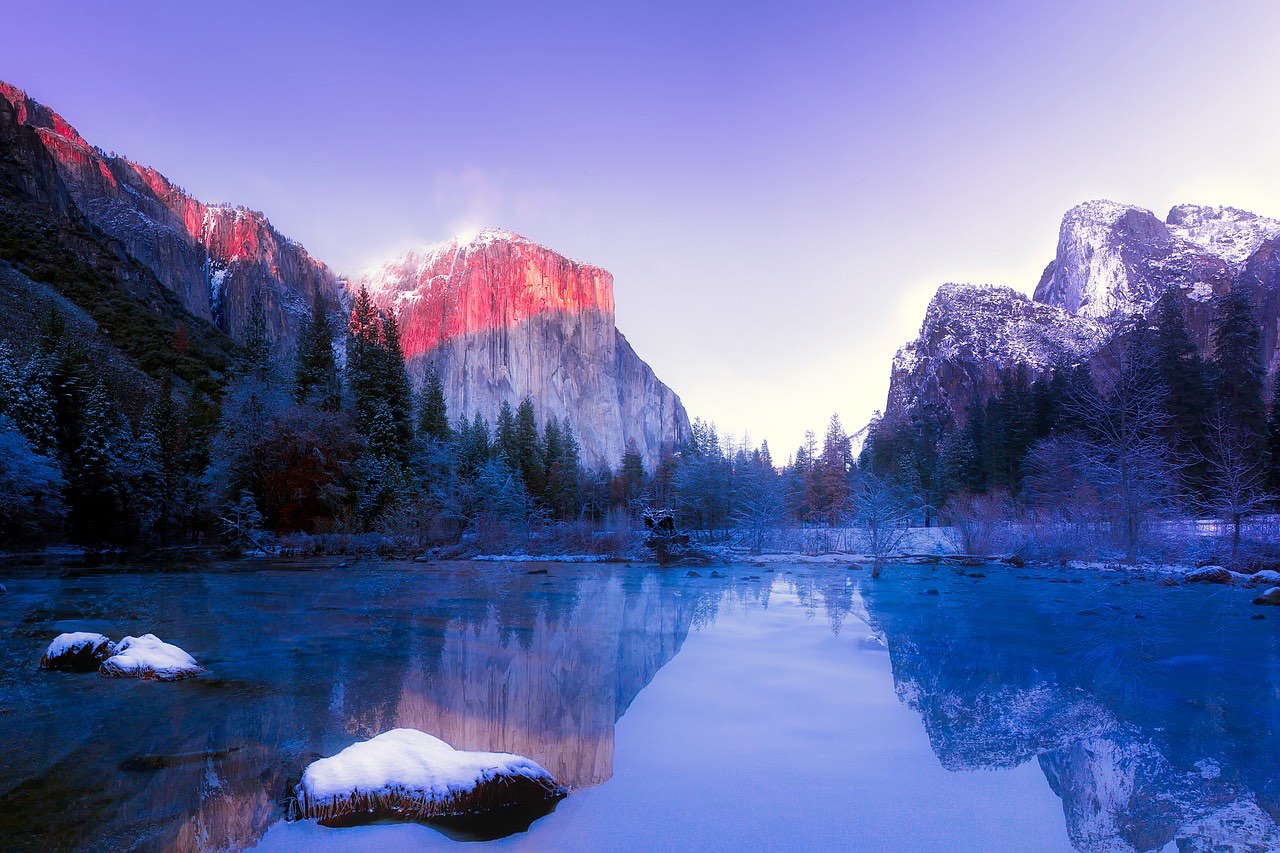 This loop includes the States of Washington and Oregon on the west-coast, and the states of Idaho, Wyoming, and Montana.

We flew to Seattle from Boston and started south. Portland city should not be missed and there are plenty of scenery near Bend so we added those as out stops. Crater Lake National Park is a short drive from Bend.

In Idaho, we made Boise our night stops and Idaho Falls as a stop for Grand Teton National Park. 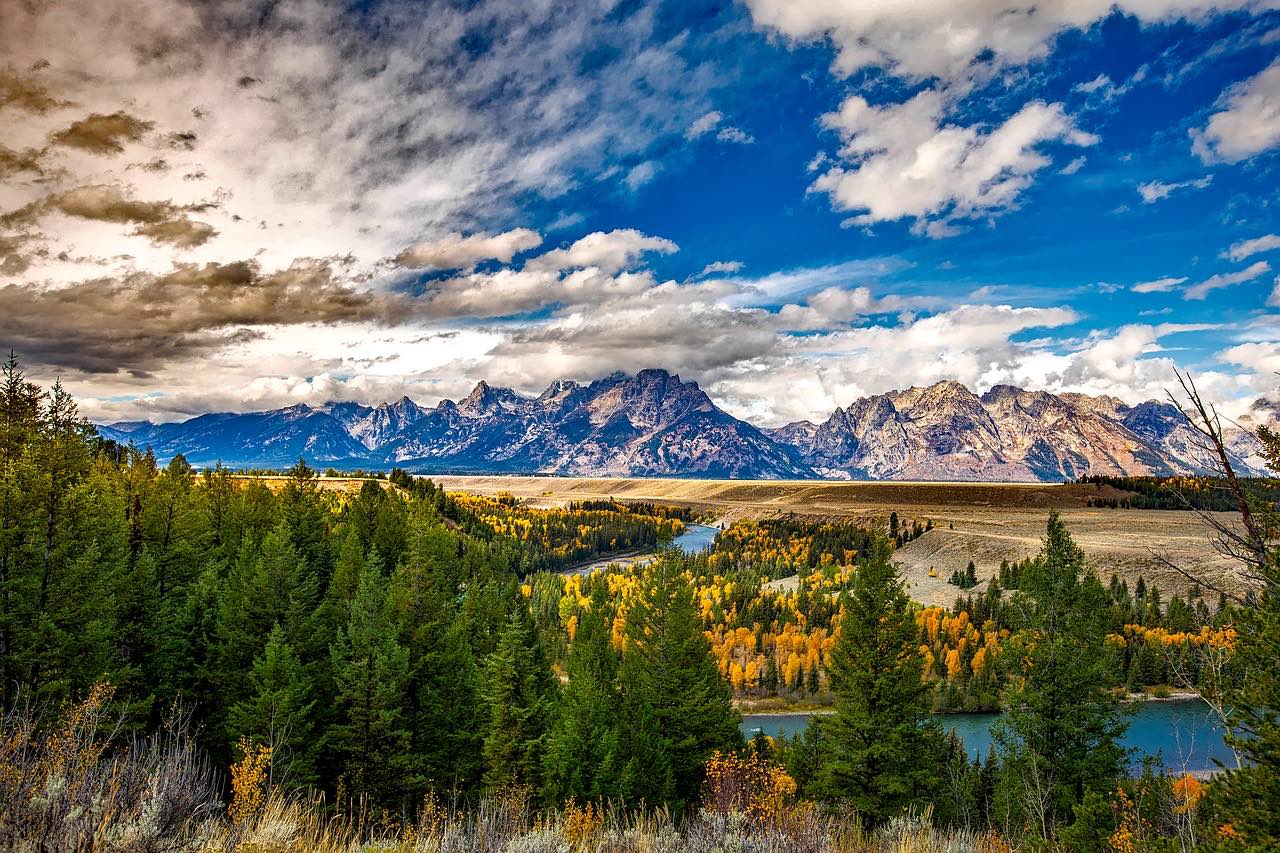 From the Grand Teton, you head directly north into the Yellowstone National Park and you should give it at least 2 days. There is just too much to see here. Also, note that in terms of the size, Yellowstone is larger than the state of Delaware and Rhode Island combined.

Continuing north, we passed through Choteau and made East Glacier village our pit stop for entry into the Montana’s crown, Glacier National Park. Again, the weather is unpredictable and allow yourself a few extra days so you don’t miss the breathtaking beauty of many green, blue, and turquoise colored glacier-fed lakes. 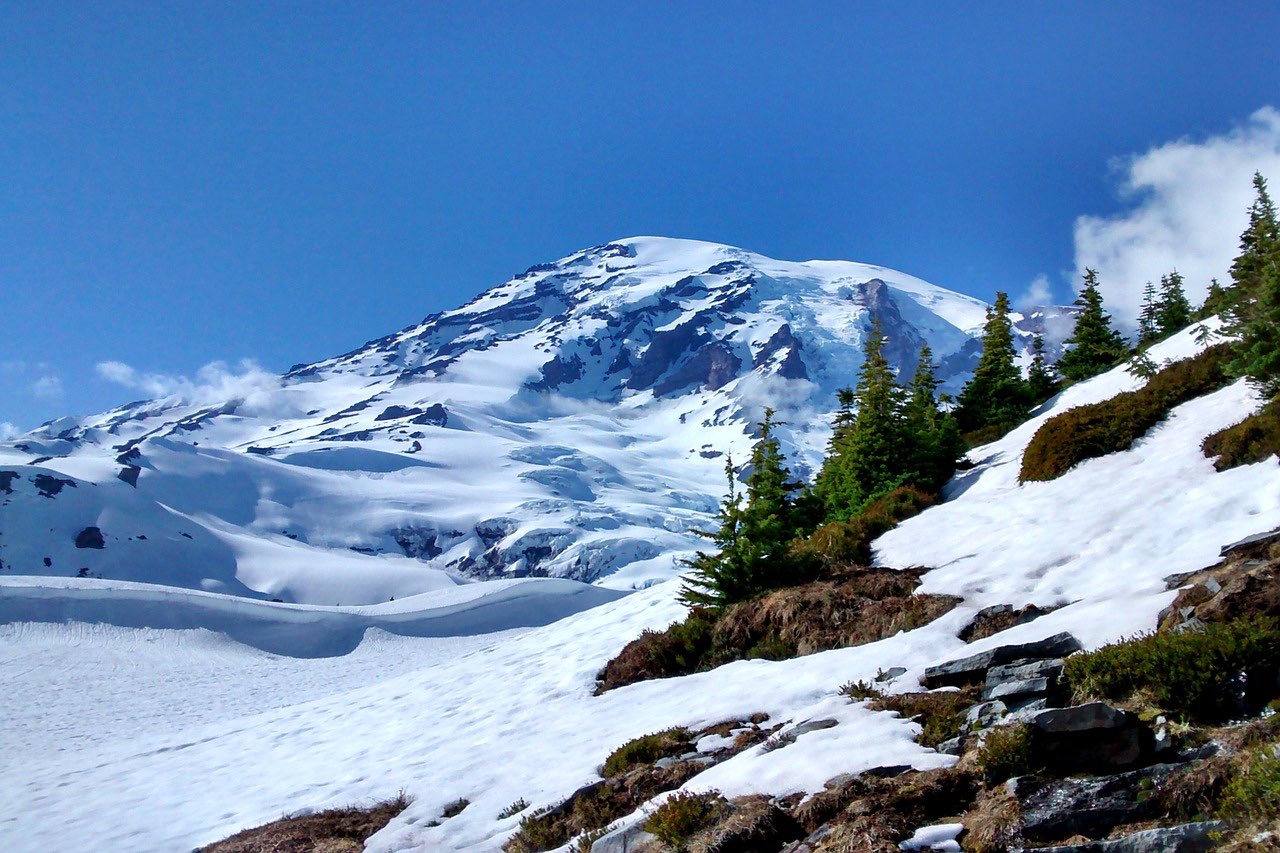 After that, you can head west and if you want you can explore Spokane on your way. Continue further west to North Cascades National Park, then head south to Seattle. Then explore Olympic National Park and Rainer National Parks.

Visit the Space Needle and the famous fish and farmers marker – Pike Place. 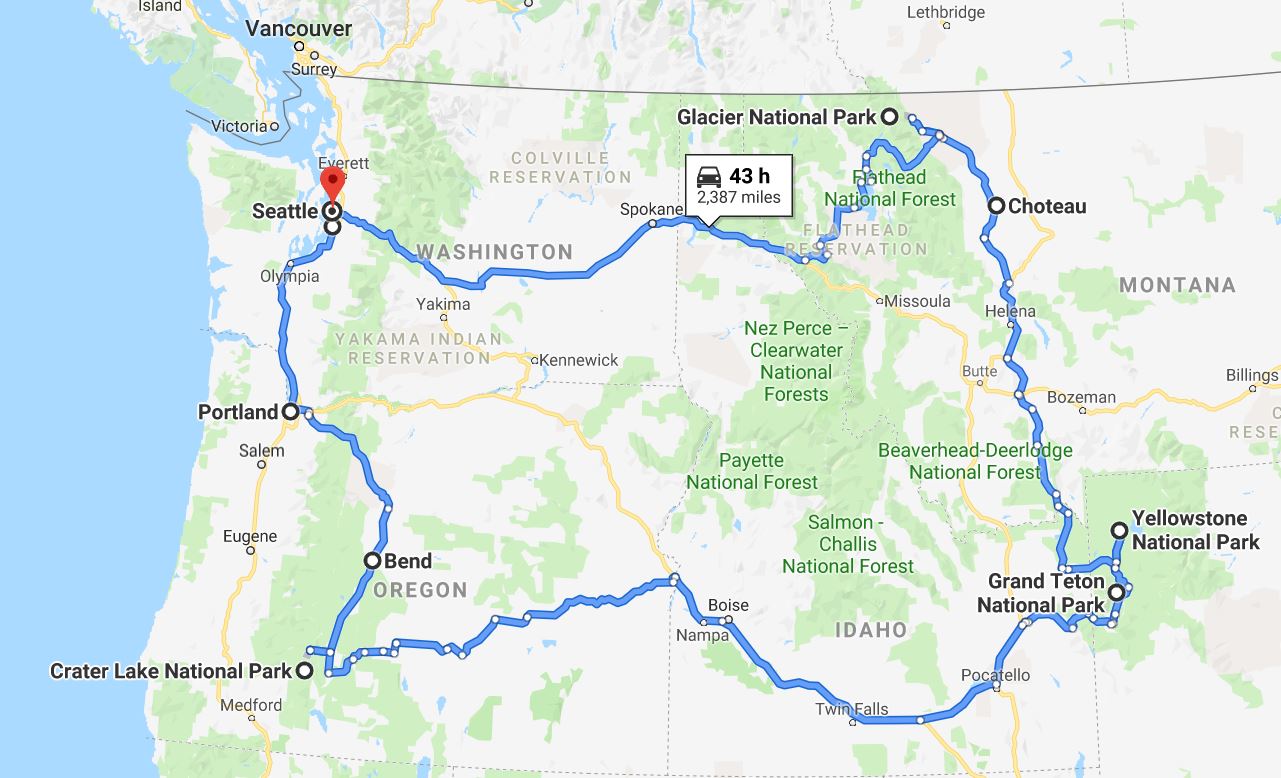 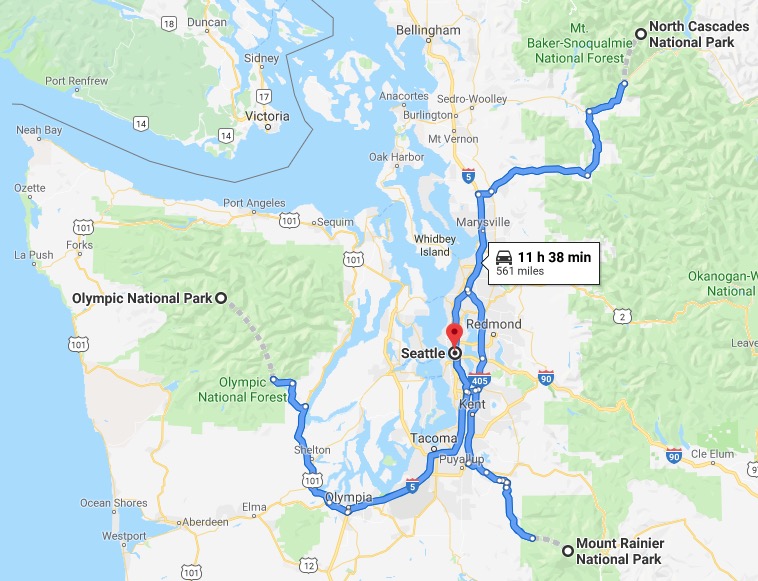 Links to open in Google Maps

The above two loops (California loop and Pacific Northwest loop) covers 15 National Parks out of 61 total. Woohoo! You are off to a great start.

You have already achieved almost 25% of your goal.

We flew from Boston to Denver and this time our eyes were set on the magnificent beauty of Colorado’s Rockies and the reddish desert of Utah. 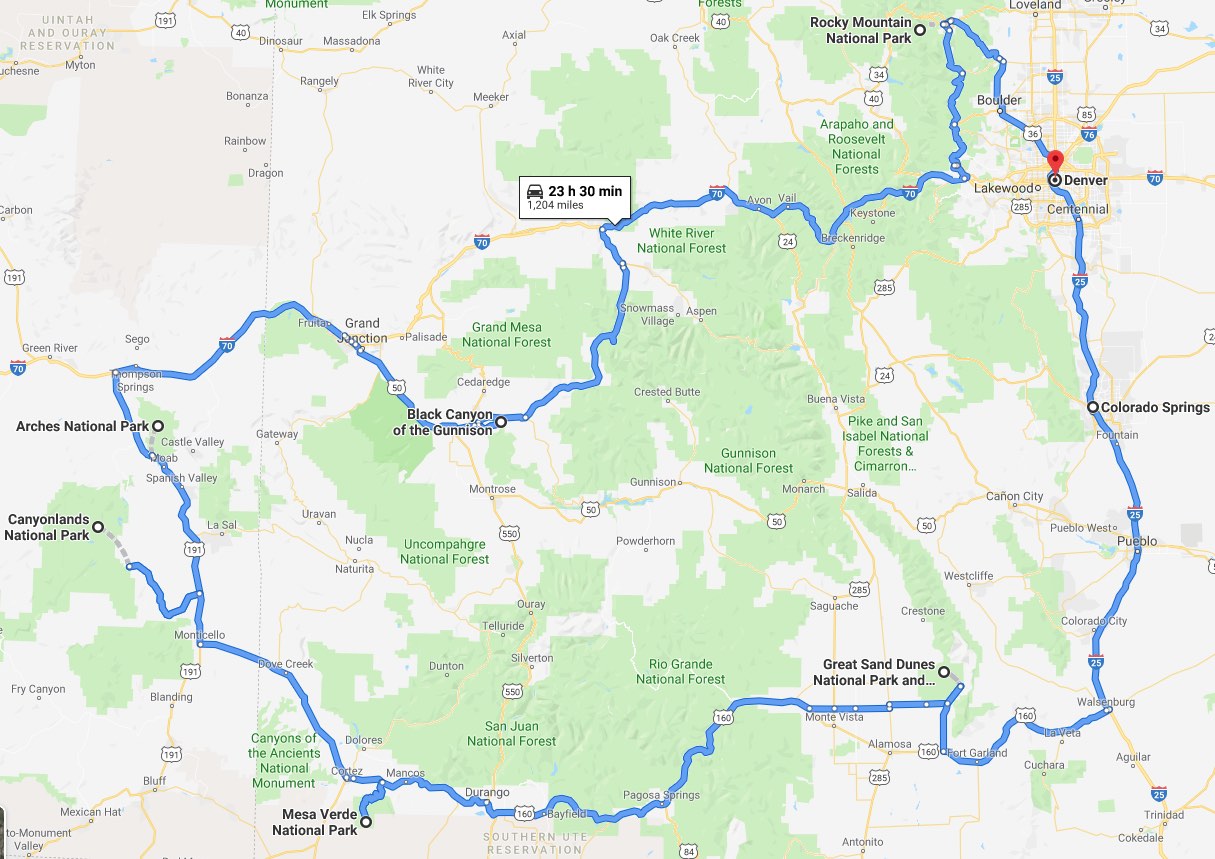 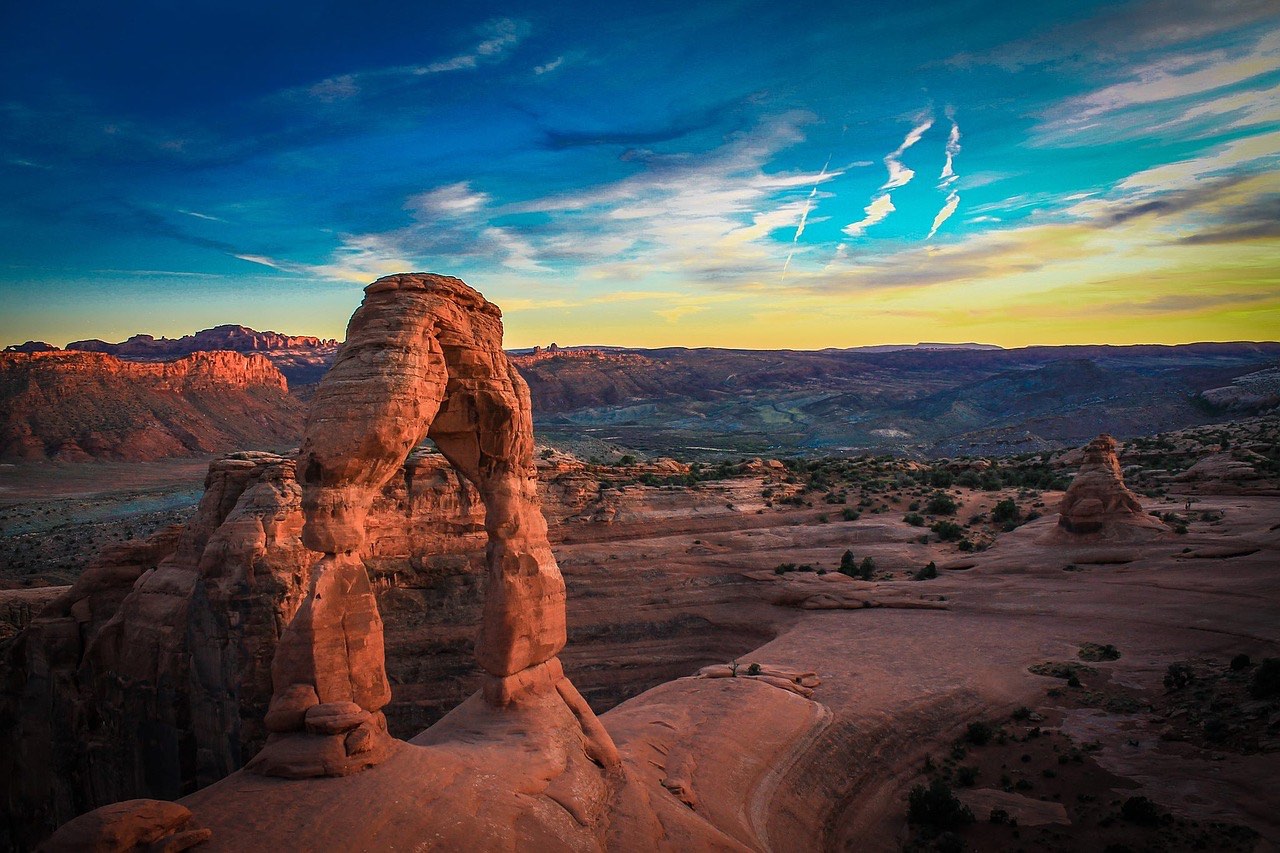 Next, we flew to Las Vegas from Boston (the tickets are usually cheap to Vegas from almost anywhere in the United States). This time, we focused on the great Canyons of Arizona and the remaining wonders of Utah, including Westworld’s Monument Valley. 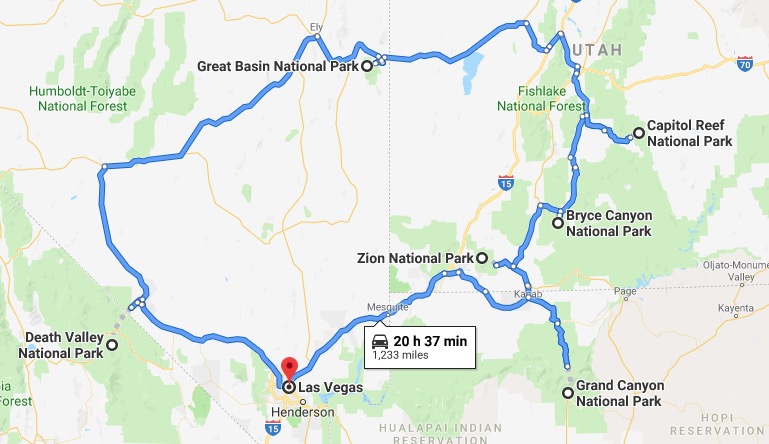 The above two loops gives 12 National Parks which brings your totals to 27/61. This is getting exciting, isn’t it! You have just made 4 trips from your home base (wherever it may be) and you are already 44% done towards your milestone!

This time we flew from Boston to Minneapolis as the tickets are again usually cheap and it’s the biggest airport for the next 5 National Parks road trip loop.

Theodore Roosevelt National Park in North Dakota is the best place to see wild bisons and wild horses. Whereas Wind Cave and Badlands in South Dakota is a unique geographical wonders. 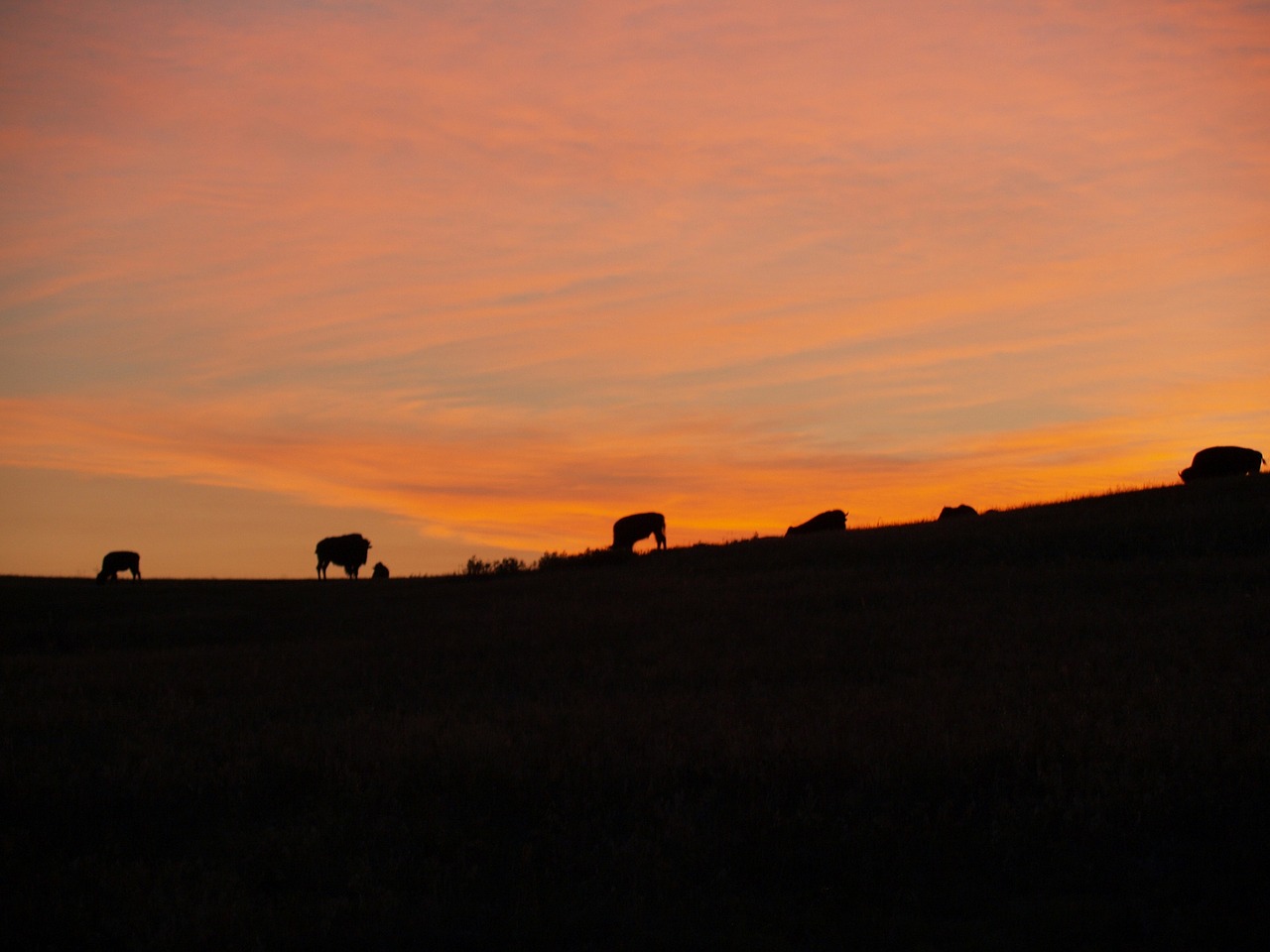 Minneapolis and Michigan bordering with Canada and surrounded by the Great Lakes is amazing during the summer time.

Talk about driving across the entire country from the comfort of your own rental car or RV. After making this 5th trip, you are more than halfway done. Your totals after visiting the above 5 National Parks now stand at 32/61. 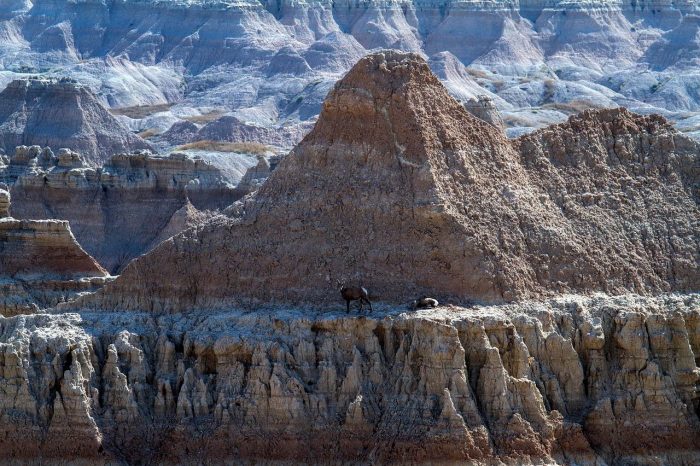 You have now visited more than half of all National Parks in the United States. Congratulations!

Let’s shift gears and head to the South now for a long road trip before we continue our journey into the Midwest and Northeast and Atlantic South.

This last trip will wrap up everything in the South, Pacific Northwest, the Rockies, and the West Coast. And you have two choices in terms of where you want to start and finish your road trip: Phoenix, Arizona or Albuquerque, New Mexico.

Depending on whether you are flying in or driving and whichever city seems to be nearer and cheaper, you can pick either one and do this loop. You have 5 National Parks to cover in this trip: 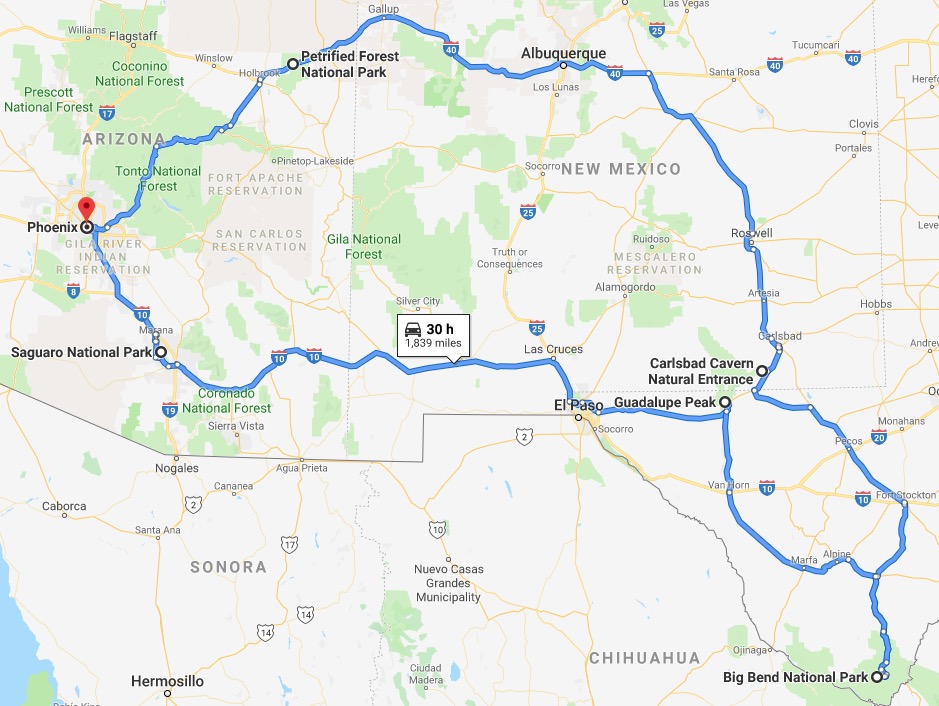 You have now 37 national parks out of 61 total. 😉 Talk about wandering around!

The goal of this big road trip is to finish everything remaining except the National Parks of Alaska (eight), Hawaii (two), Florida (three), and Maine (one). By doing this almost 3500 miles long loop, you’ll end up with 47 National Parks out of 61 total.

Now, that’s almost near-80% finished! And, you are just 4 trips away from finishing your adventure. 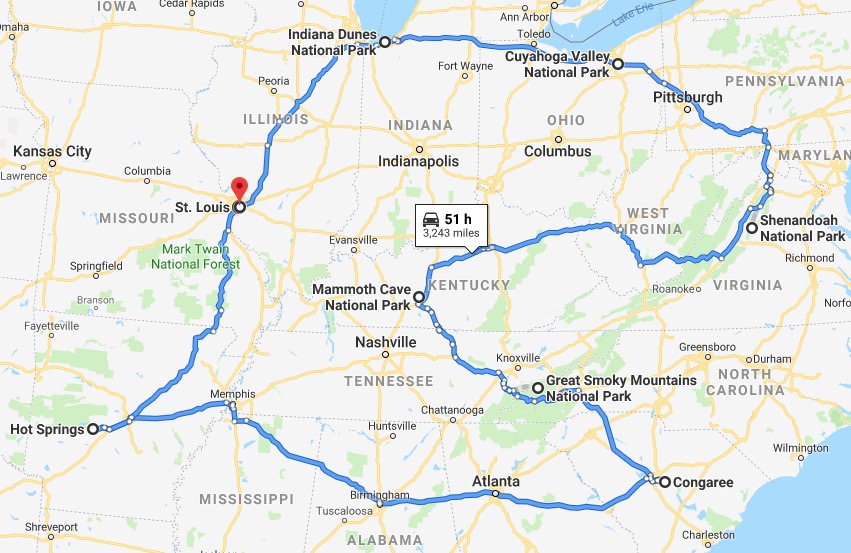 In the above loop, you have got two newest National Parks of the United States, the St. Louis Gateway Arch and Indiana Dunes in Indiana. On this trip, you’ll also pass through great cities such as St. Louis, Chicago, Pittsburgh, Atlanta, and Memphis.

Florida has three National Parks. Everyone has heard of Everglades National Park and the gators but did you know, Florida also has two marine area that are protected National Parks: Biscayne and Dry Tortugas.

Now you are “50 National Parks visited” kind of person. 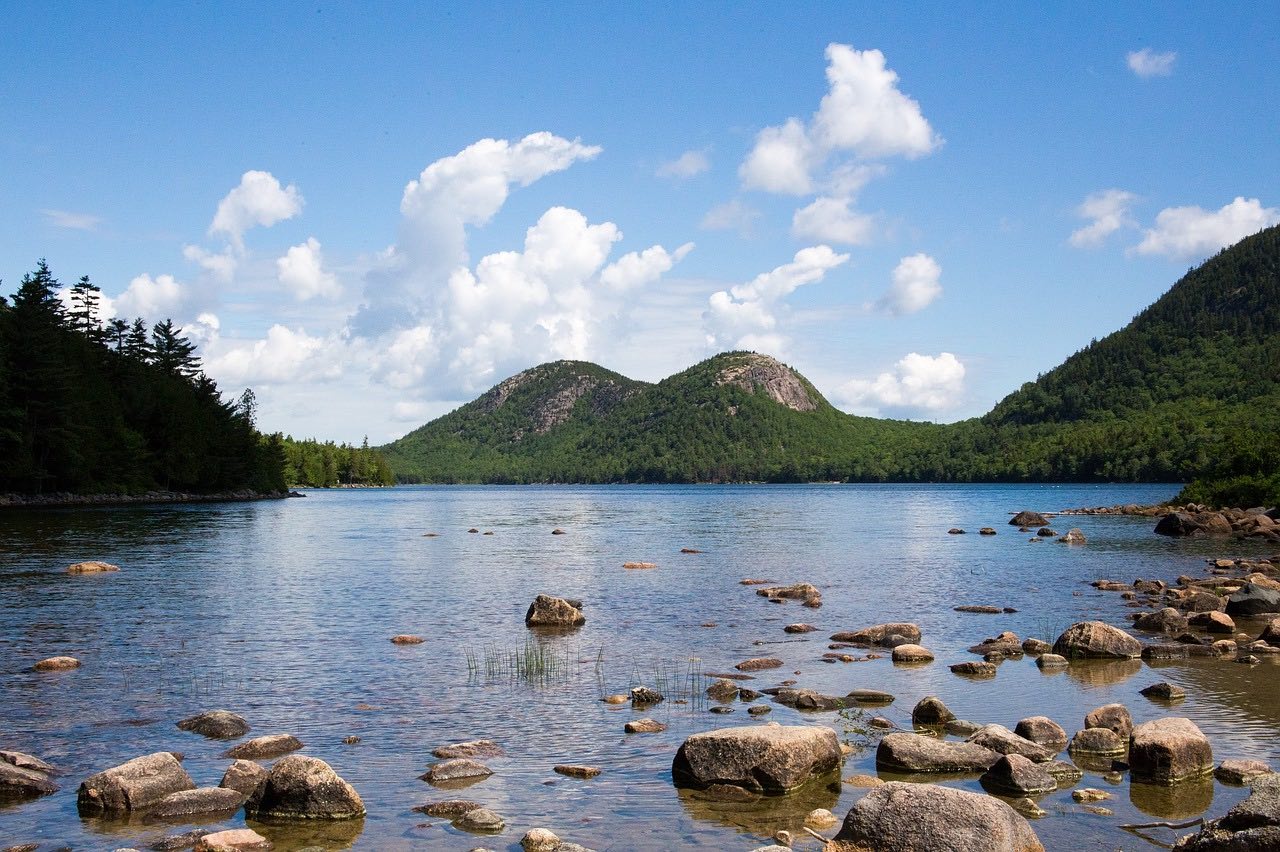 For your 51st National Park, fly to Boston or Portland, Maine and then drive to Bar Harbor, Maine and enjoy the scenic beauty of Acadia National Park. It’s amazing during the Fall colors.

Since we live in Boston, we have been to Acadia numerous times and in all seasons. Maine has a beautiful coastline and Acadia is the crown jewel.

Woohoo! Congratulations! You have just finished 51/61 and all of the National Parks in the Contiguous United States.

You can pat on your back and take a moment to allow yourself to celebrate. This is quite a milestone! Not many people have seen this beautiful country coast-to-coast and you are among the lucky few!

Then head south to Juneau, Alaska to visit Glacier Bay National Park. It’s accessible only by ship or plane.

Next, head north to Denali National Park and then continue further north to the Gates of the Arctic National Park. Upon return, either from Fairbanks or Anchorage, you may want to take a flight to the last remaining national park in Alaska, Kobuk Valley National Park. 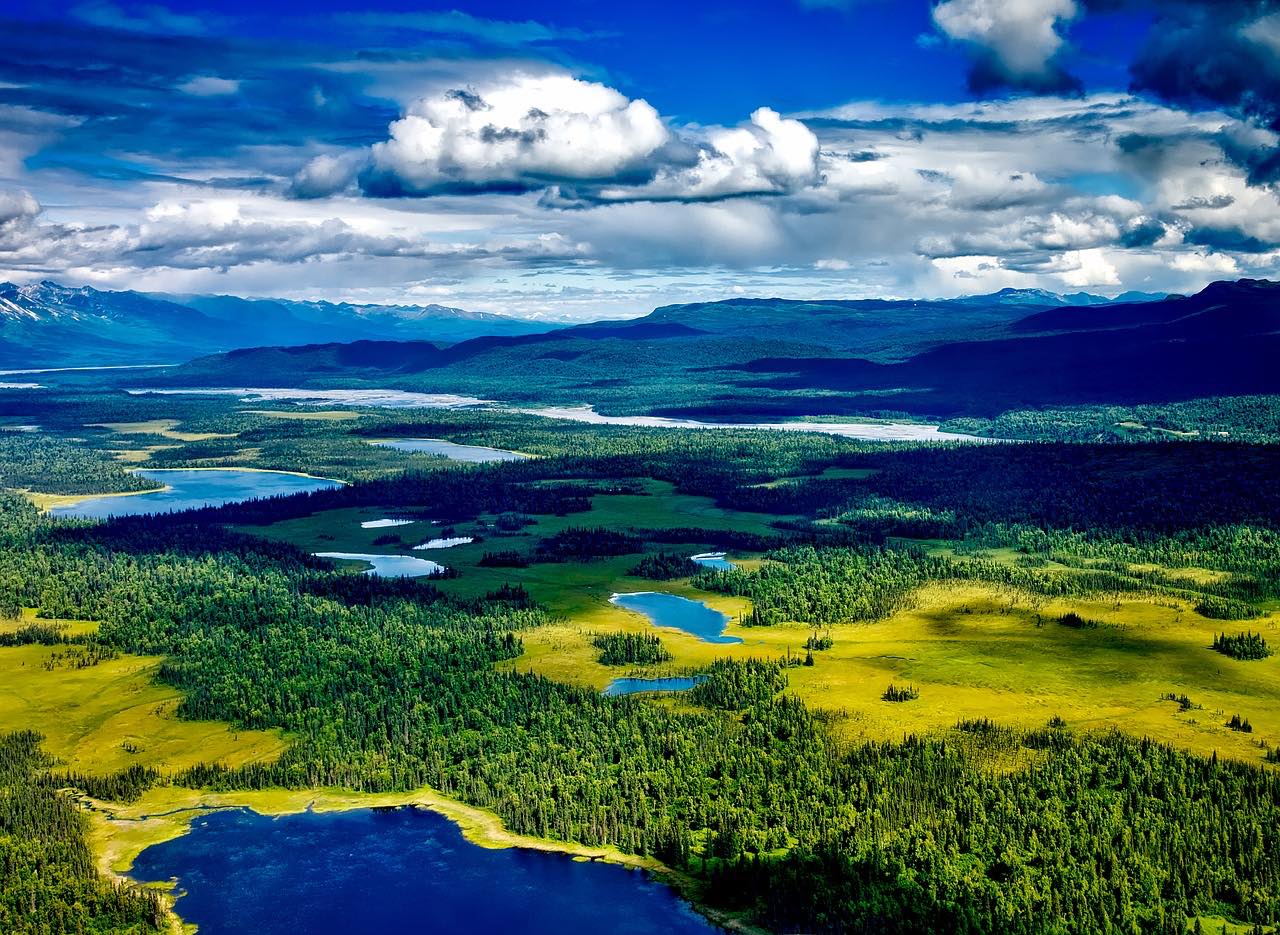 What could be a better a place to finish this epic adventure than in Hawaii. Hawaii was the 50th state of the US and it has 4 major islands that everyone visits to: Oahu, Big Island, Maui, and Kauai. 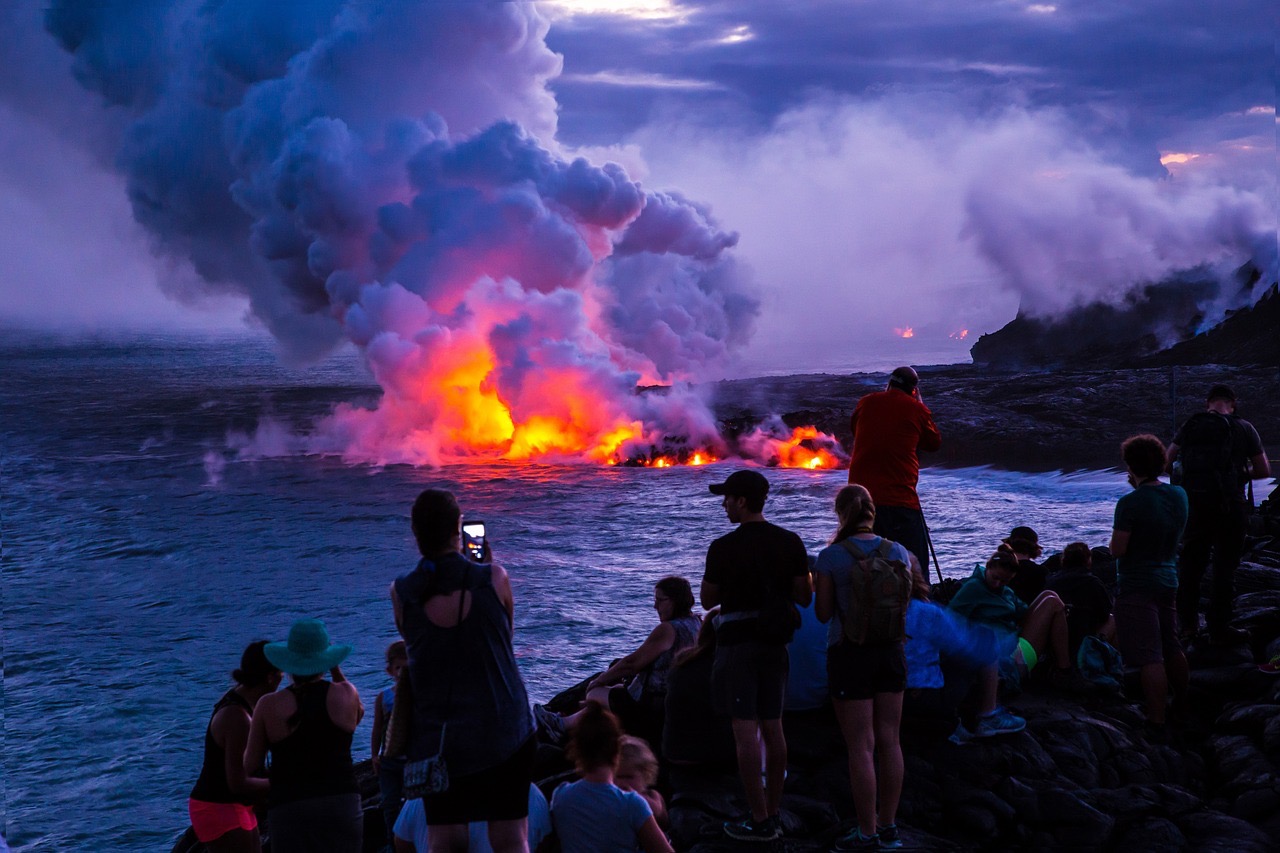 Congratulations once again, now you have visited all 61 US National Parks!

If you are wondering what’s next, check out our Ultimate Travel Bucket List page to start new adventures!

Note: The cover photo is of Yellowstone National Park, our favorite national park along with Hawaii’s Volcanoes National Park.