How I spent My Summer Vacation In Manali

Summers in India can be grueling. That is what pushes me every year to visit a hill station – to cool off. This year, I chose not to go alone but in a group. I didn’t know any of my crew initially, but once we decided on the trip, everyone was in.

As we were doing a group tour, we thought it would be better to have a long train journey in order to get to know each other. And so it began the mega journey of 2018.

Amidst all the shouts and bustle of the train, we managed to bring life to the train. Innumerable rounds of antakshari (it is a game where you can sing songs ), and playing Buff as well as UNO, we finally reached New Delhi.

We had to ride from the Nizamuddin station to Manali overnight, which is about 500 km.

We all were tired beyond belief, and it took us more than 3 hours just to get out of Delhi region. Once we made it close enough to Chandigarh we liked to stop at Dhabas which is a specialty of this region.

The Pahalwan Dhaba is famous, but foolish me and my sister we made it to Baskin and Robbins to have some ice-cream rather than having the typical Haryanvi lassi. 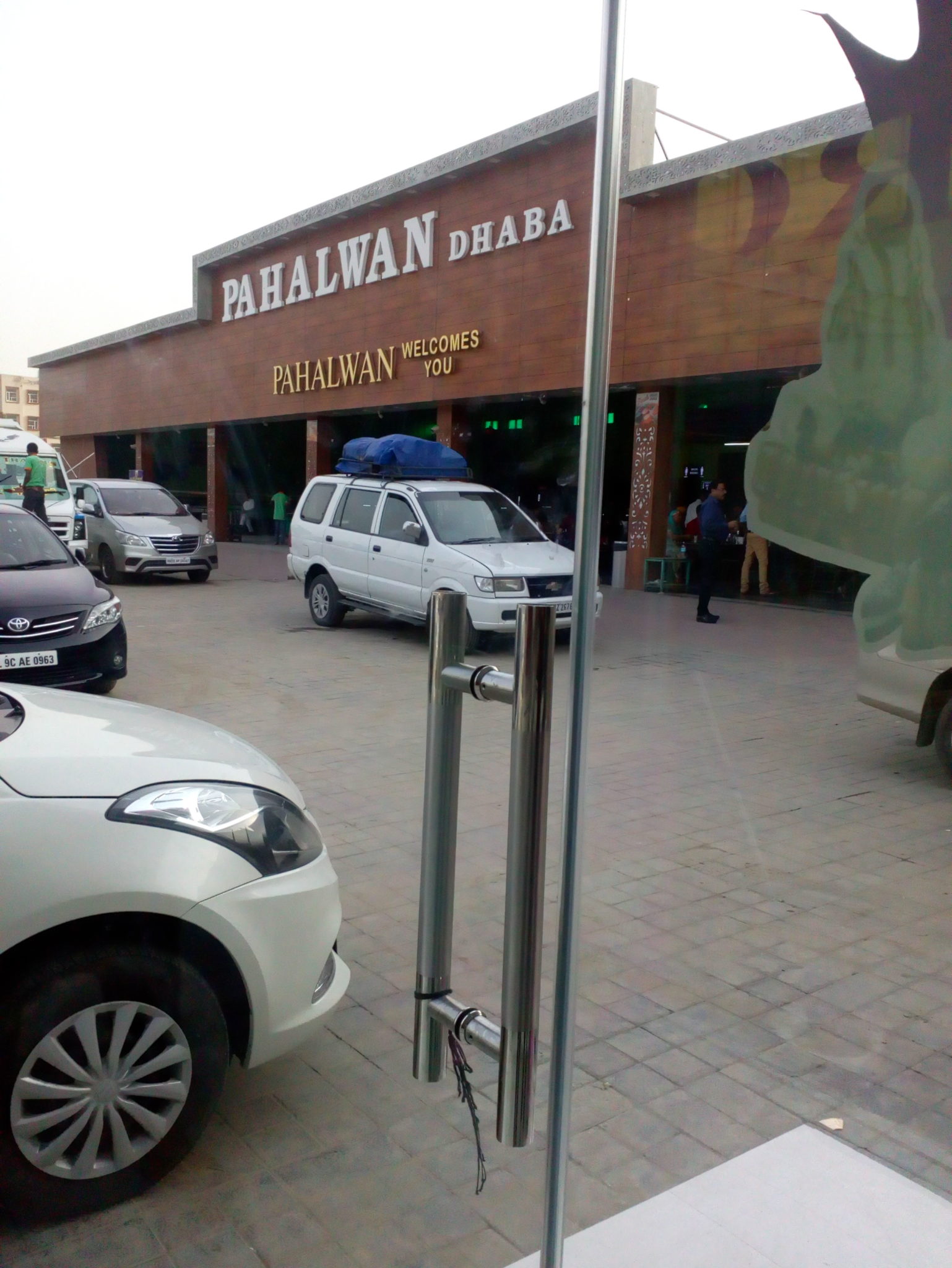 Later we just stopped at another Dhaba where we had some tea, and as you can see clicked some shitty pictures. I love driving out into the night, but it was a risky thing we were doing because the road from Chandigarh to Manali is hilly and the terrain is difficult.

That too we had only one designated driver who had been driving for hours. My main goal was not to let him doze off. So off went into the night.

I have been to hilly areas but is not any area have I seen such fast driving, because people value their lives there. Yet on my road to Manali, I thought it is gonna be my last night the way Ravi- our chauffeur was driving. We even had to wait at many stops just to take a break and free ourselves from the muscle cramps.

My best moment was when we just waited at a place for coffee at around 3 in the morning, we were already up in the hills. It was cold and I had to light a cigarette and share it with my friends so we get to keep ourselves warm.

Just sitting there in the night with the cold mountain wind blowing and burning off the cigarette was a moment I am unlikely to forget anytime soon.

I did not sleep a wink throughout the ride, I used to bump Ravi’s shoulder to let him know that he was sleeping. But finally watching the first rays of sunlight filtering through the mountains gave me a giddy excitement which I hadn’t gotten in a long time.

Two days of long journey, and a sleepless night, and I was at Hanogi. This shaky bridge would give anyone a heart attack. The wind was loud above the Beas River, and my one step there make it shake. Goosebumps! 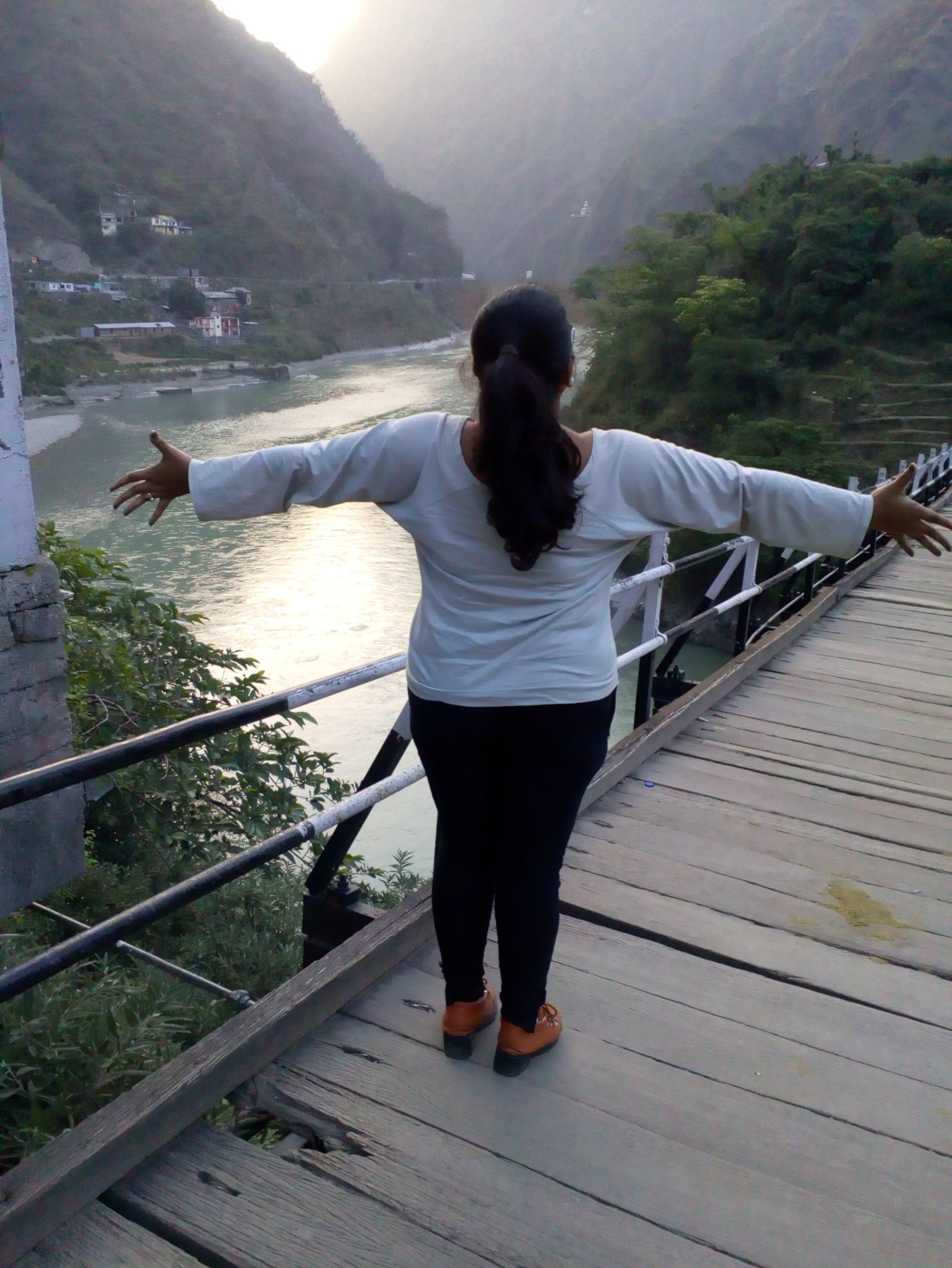 It took another two and a half hours to reach Manali. My first glance at it and I could not believe it. My eyes went straight to the mountains. And that is the closest I had yet been to a snow-laden mountain. I could not thank my hotel staff enough because the view was gorgeous. I could spend days sitting there and staring outta the window.

But whatever it may be we needed a power nap and refreshment before we explored. After a yummy lunch of  Egg Fried rice (Pahari food is love)  at a local joint, we headed off to see the thrills Manali had to offer. We decided on visiting places that would not demand much of our energy, tired to the bones? Yeah.

THINGS TO DO IN MANALI

You can walk anywhere in Manali, it is better that way. Around the summers it is one of the most visited places. There was honking of cars everywhere which I don’t like one bit. So we walked our way to Hadimba Devi temple. I had looked at this marvel in pictures. 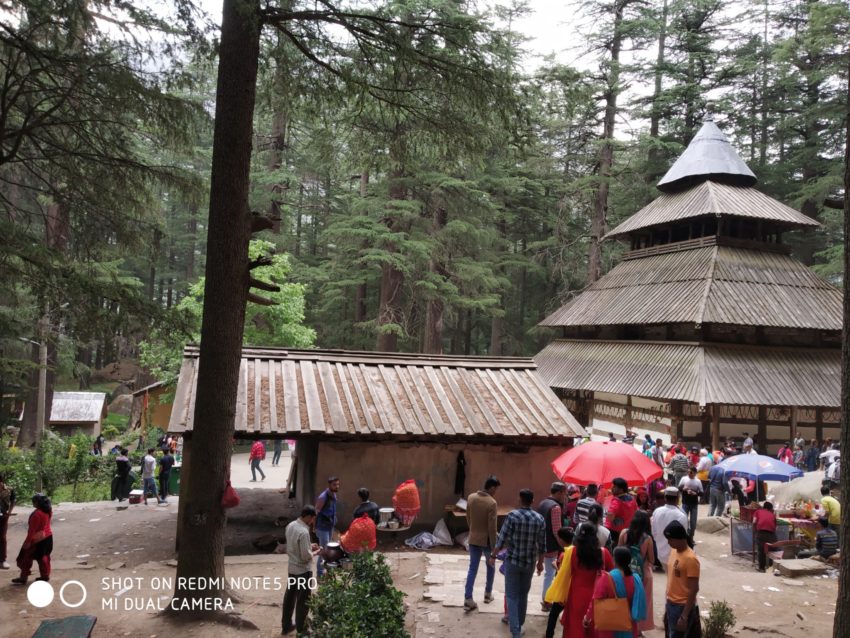 But up close it was surreal. I hate crowds. So when I tried to enter the temple and saw the line of devotees. I scratched the idea of going in. But I spend my time in Van Vihar. Which is close to the temple and a quiet place to sit and relax.

One of my best experiences of the first day in Manali was in the club house. The club house is a place for sports- from indoor to outdoor. The first thing I did there was water zorbing.

I am out of shape so it is no wonder I  took breathing breaks while being on my all fours and trying to get the big ball rolling in the water. It was exciting and draining as well, I effing loved it. 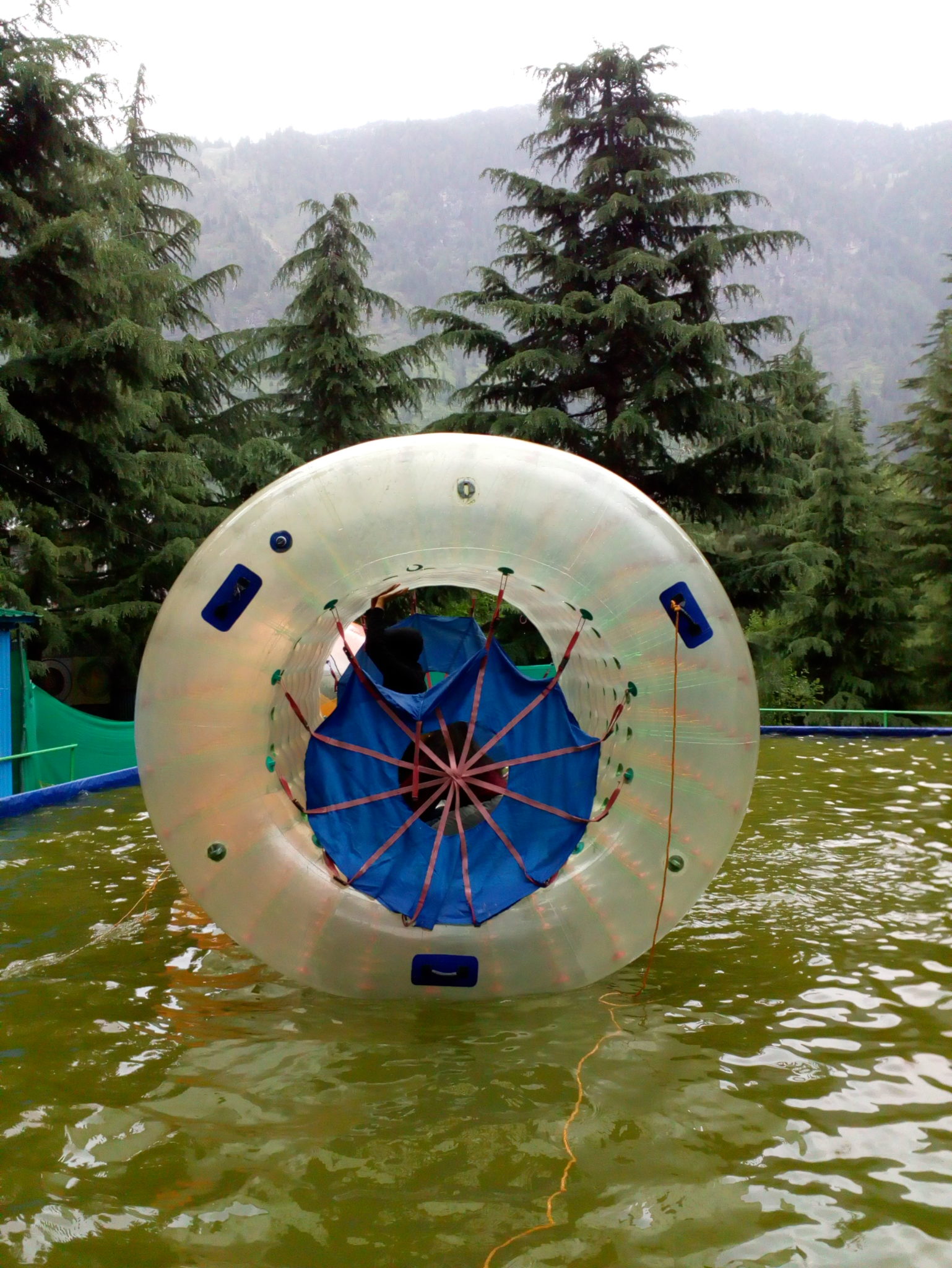 After getting out of breath by zorbing, we headed off indoors to play some pool. To be honest, I got no idea how to handle a stick. But those amongst us knew, taught me how to do it. And I clearly learned how to hit it.

Our time in the Club House didn’t just end there we spent an insane amount of money on per chance games like shooting, archery and yes a silly one was “Drop all the glasses with a wall”. We wanted to head to Vashist Springs, which is a holy place with hot water springs. But it was already too late, so we decided against it.

The Hotel we stayed in had served us delicious dinner. If you travel up here and do not taste Rajma Chawal then your traveling here  is futile. So make sure that you taste a plate of it, and once you have done it you will wanna do it again and again.

From the day I planned on coming to Manali, Rohtang had been up on my list. It is one of the most dangerous roads in the world and it takes you up into the Antarctic like beauty of the mountains. But sadly just few days before we arrived there was snowfall. And roads to Rohtang were close.

So we settled for a place in lower altitude, the road to it was nearly as tricky as Rohtang – we went to Marhi. At an altitude of 11,000 ft, it still had snow left in the summer. The temperature was below the freezing point. And just when I had started playing with snow it started raining. 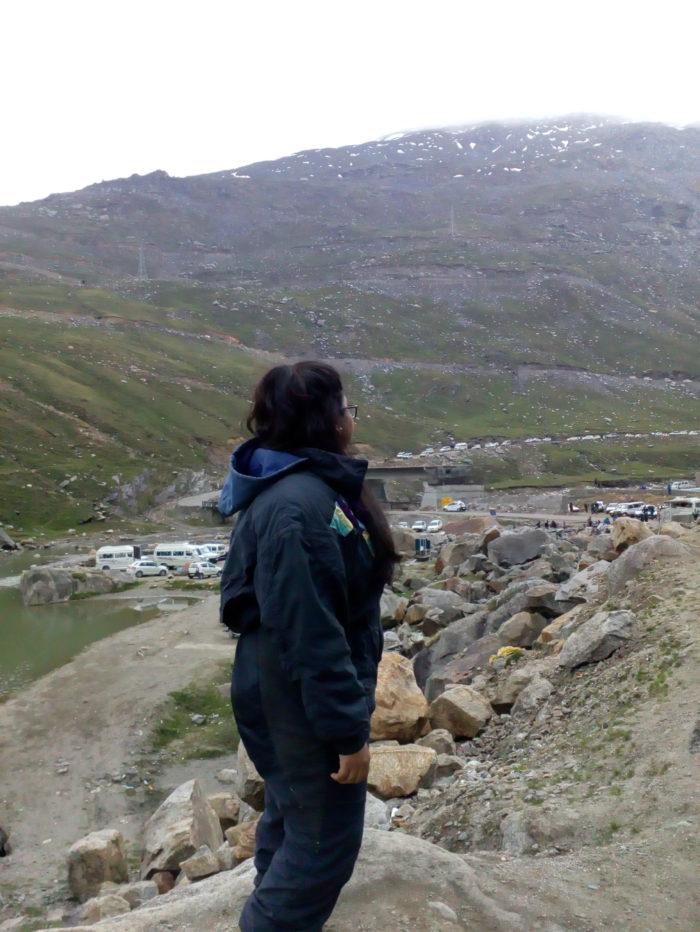 I can’t tell you enough how much I loved this place. It had an army camp just above the mountain and on the way you encounter lot of army trucks going. It is really commendable how these brave-heart soldiers survive here.

It took half of our day to come back from Marhi, and we made a point of getting out of our snow suits in public which was the goofiest thing I have ever done.

Then we headed to Solang Valley also known as the snow point( though there is no snow here during the summer). It is famous for skiing during winter. I so want to travel here during winter, to just catch the snow in time. 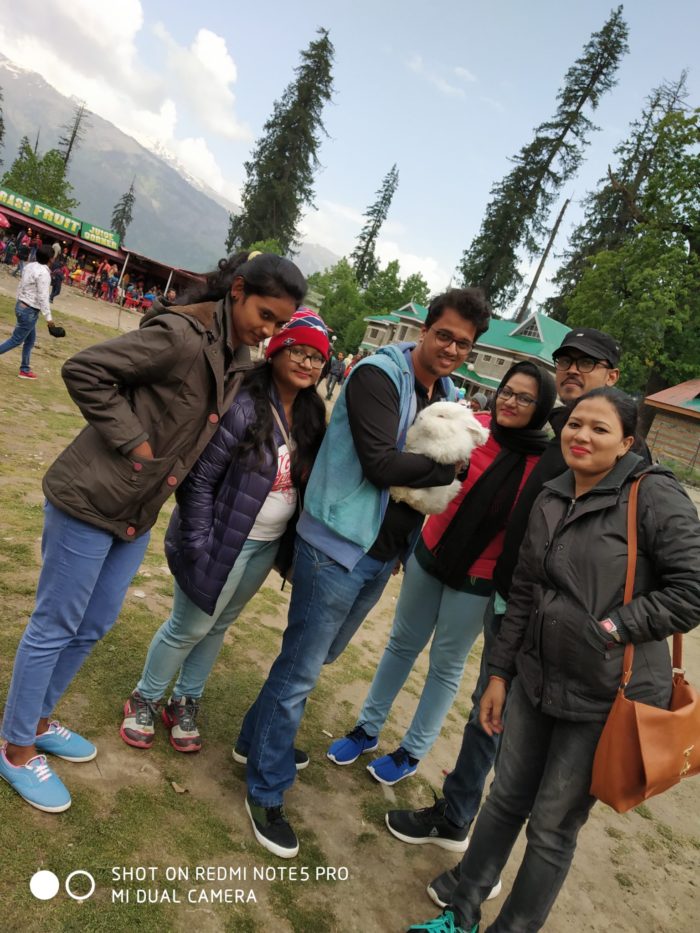 There wasn’t much to do here during summer because it just looked like a barren piece of land. Something caught my eye here, and it was paragliding.

Our whole gang wanted to do Paragliding but as soon as the instructors saw us, they hiked up their prices, demanding 3000 Rupees from all of us. And that paragliding did not even have a proper height to it. We chucked the idea away, disappointed.

When something outsmarts your budget, what do you do? You do something far more exciting at a meager cost. That is what happened to us. We saw an old man with a bunch of horses, near the Shiv temple just outside the Skiing center.

It was my sister’s idea to go talk to him, and boom! We landed a deal. He decided to take us all to the shiv temple on horseback for 12 km. And he charged much less than we had expected. So yay!

In no time we hopped on. But, damn my luck, I got the naughtiest of them all. His name was Sheru (meaning Lion in Hindi). He reared his head and galloped here and there, once I was on his back. Thank God! He did not throw me off.

The first few minutes of the ride, I feared for my life, but soon enough, I drank in my surroundings. We were walking straight into the foothills of the mountain where the Beas River originates. 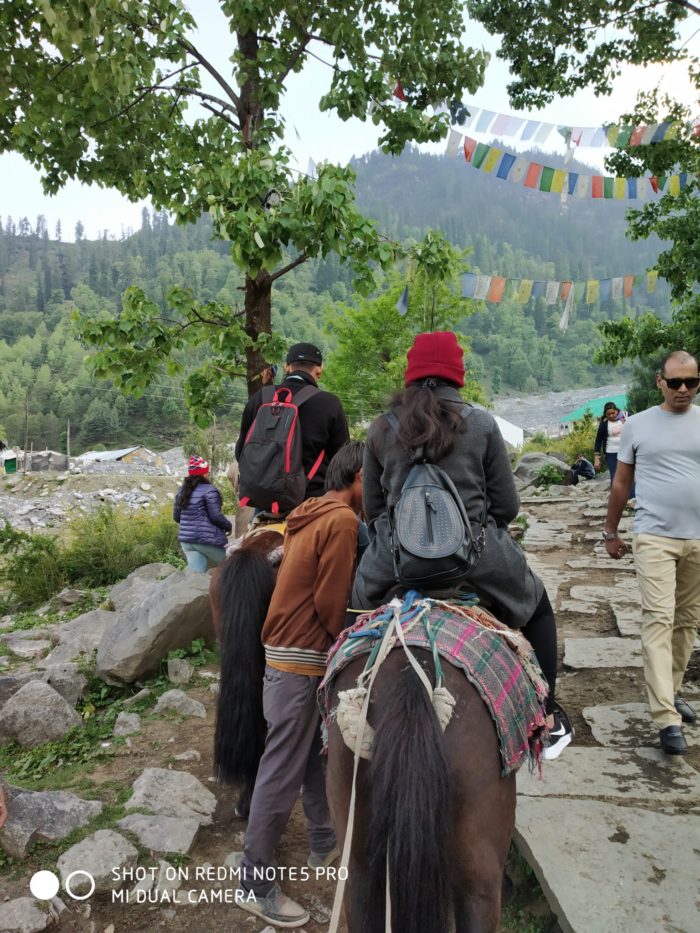 Imagine, being on a horseback, hopping through the rugged terrain with the glaciers winding across your path, this experience was my favorite as of yet. Our guide who led us towards the temple, was an old Himachali man, he told us about himself. How now people prefer riding the hotshot snow motorbikes rather than taking a horse, and how we were his first ride of the entire day.

While he talked I talked to Sheru, calming him down. When we went uphill I had to lean backward, and when we went down I had to lean forward. “ Easy there Sheru Boy!” was all I had to say. Once we reached our location, it was so cold there. We had to sip a cuppa coffee.

Taking rest for a while, we started our journey back, and now I had trouble getting up on Sheru, because I am a shorty. Our guide was old so he wasn’t able to push me up even though he tried. And after my several attempts, there came a local who lifted me up easily so I straddled. Everyone around the coffee stall laughed out loud, and I turned tomato red, yet I looked around and waved at him, shouting a huge thank you. 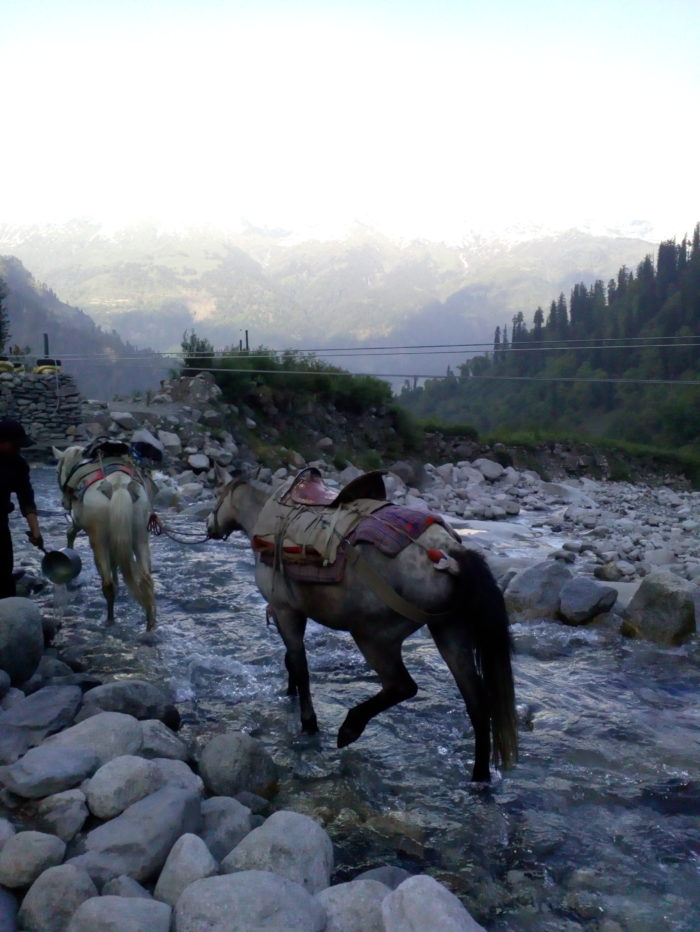 The journey back was victorious, how you might ask. Let me tell you. When we were on our horseback perched up high, that too walking in an imposing line, everybody down riding the motorbikes looked up at us. And my inner goddess just did a twirl!

Going local and sustaining the local business is the best possible way to travel. That point got proven that day.