While most travelers to Bhutan visit the capital city Thimpu and Paro, Bhutan offers much more. Many travelers skip Central Bhutan (either due to lack of time or because of the poor road conditions) but do not make this mistake.

Central Bhutan is known for its evergreen mountains and neatly cultivated valleys. It comprises of the country’s cultural heartland, accented by several of Bhutan’s oldest and most significant temples and monasteries.

Many spectacular festivals are celebrated here for the spiritual. While there are also dozens of great day hikes throughout the region for the adventurous souls. 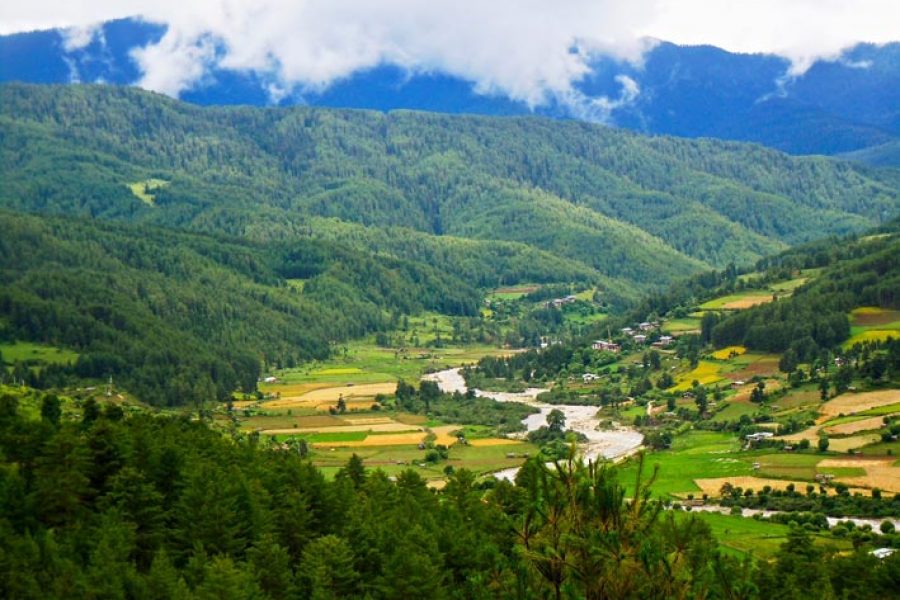 Things To Do In Central Bhutan

Culturally, Central Bhutan is closer to Eastern Bhutan, and as the East the predominant school of Buddhism is Nyingma. The towns, however, have been developed with a mixture of both Eastern and Western design.

The Bumthang region is known as the spiritual heart of the kingdom, as it was here that Guru Rinpoche cured a local king of a spirit-induced ailment in the 8th century CE, an event that resulted in the king, and finally the whole country, embracing Buddhism.

Bumthang offers something for every kind of traveler: hiking, spiritual experiences or just lazing around doing nothing. Jakar Dzong, Jambay Lhakhang, Kurje Lhakhang, and Tamshing Lhakhang are some of the most visited monasteries, located amidst nature.

Kurjey Lhakhang in Jakar is a temple built around a cave with a body print of Guru Rinpoche embedded in the wall. Guru Rinpoche practiced meditation here on his first visit to Bhutan and as such, it is the earliest Buddhist relic in the country.

One of Bhutan’s most sacred monasteries. A body print of Guru Rinpoche is preserved in a cave around which the oldest of the three buildings are built. The original building was constructed in 1652 by Trongsa Penlop, while the latest addition was added by the late Queen Mother Ashi Kesang Wangchuk in 1990.

Jambey Lhakhang is located in Jakar. This is one of the 108 monasteries that were miraculously constructed by King Songten Gampo in one night. The monastery is located between Kurjey Lhakhang and Jakar Dzong.

Tharpaling Goemba is located in Chhumey. Founded by the Dzogchen master Longchen Rabjam in 1352, the monastery was also home to the famous Nyingma guru Jigme Lingpa in the 18th century. It is located at 3,600m and is home to around 150 monks. It can be reached by an unpaved road. 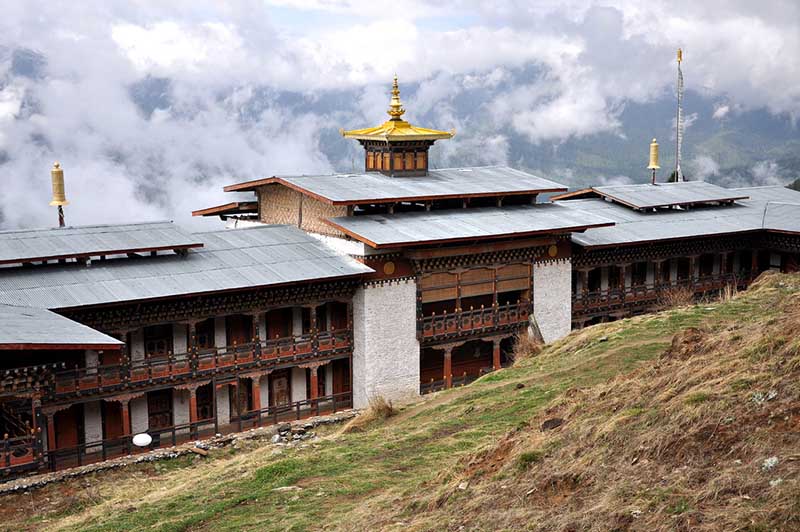 This commanding dzong, high above the roaring Mangde Chhu, is perhaps the most spectacularly sited dzong in Bhutan, with a sheer drop to the south that often just disappears into cloud and mist.

This Dzong is connected by a succession of alley-like corridors, wide stone stairs, and beautiful paved courtyards. The southernmost part of the dzong, Chorten Lhakhang, the first hermitage built here. 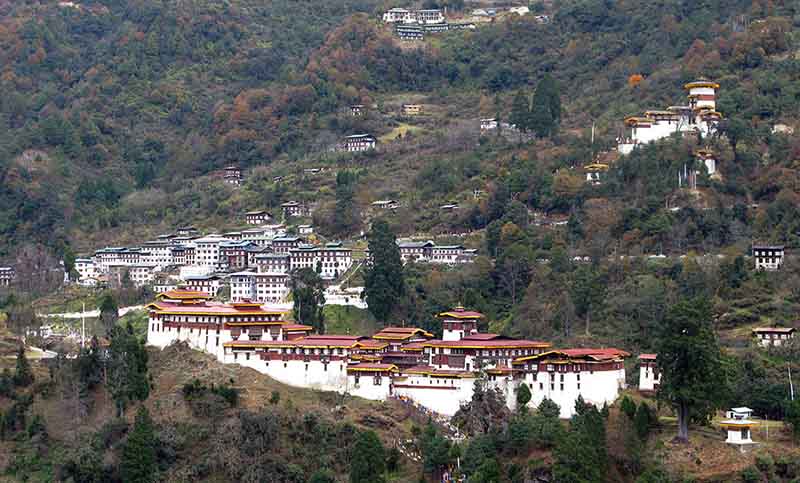 Tamshing Goemba situated in Jakar is monastery established in 1501 by the local Buddhist saint Pema Lingpa. The two-story building contains some lovely frescoes and has a very low ceiling (apparently Pema Lingpa was very short!)

In addition, there is a 500-year-old suit of metal chain made by Pema Lingpa located on the first floor. It is considered auspicious to circumambulate the temple three times with the chain draped over the back and shoulders. 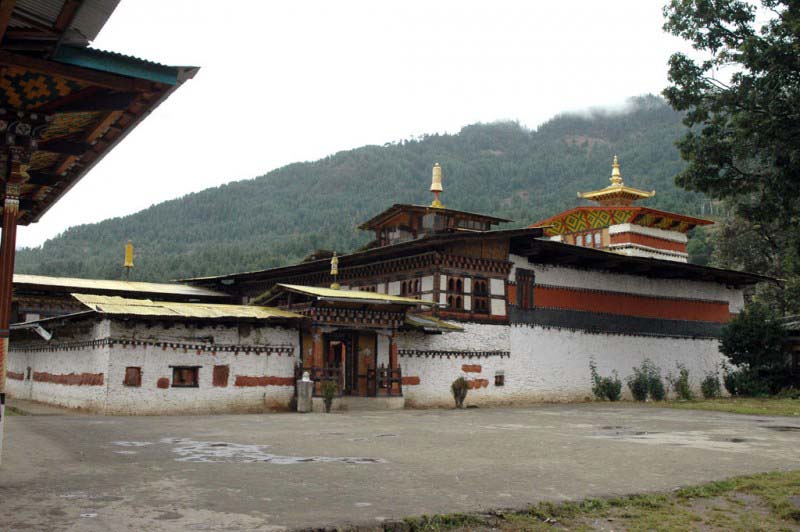 Sumthrang Lhakhang, Shinyer Village, Ura. Several-hundred-year-old monasteries with a lot of simple but beautiful artwork. Those visiting in January should notice the two flowering trees near the main gate, while other trees of the same variety lay bare.

Legend states that these trees sprouted from a walking stick placed at the gate by the monastery’s founder, Gyelwa Lhanangpa.

The valley of Phobjika is also popularly known as Gangtey. This pristine valley is a small village with some homes that are spread far and wide, amidst the green farms.

During the winter (October to mid-February) a rare species of black-necked crane visit this valley in large numbers. You can watch them at the Black Necked Crane Park in Gangtey. There is also the famous 17th-century Gangtey Monastery, enriched with paintings depicting Buddhism. 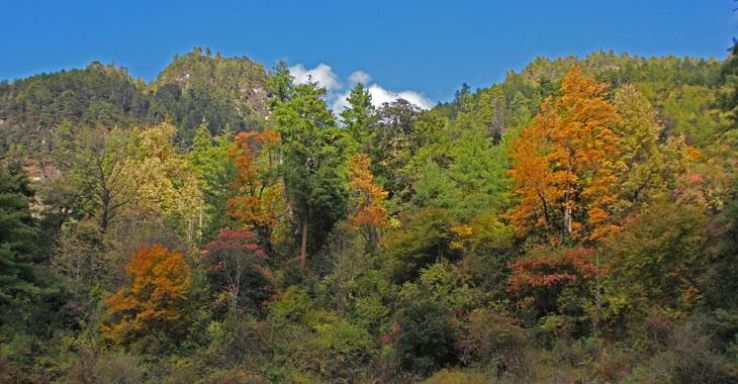 Festival is an essential part of the Bhutanese culture and spirituality. The traditions of wearing masks began in the 8th century and it has immense significance for the mask dance during Tshechus.

Colorful masks are the reasons why the mask dance festivals in Bhutan appear to be appealing. Masks are usually carved out from the woods and redecorated with brilliant colors, beads matching with the costumes of traditional mask dancers or performers.

The best time would be during the months of April, October, November. The beginning of summer, post-monsoon or beginning of winter. The months which are considered not so ideal for the tourists are January, February, July, August as the weather can be a little harsh.

Taxi is the main means of transport for tourist. You have shared cabs, taxis for private people and the bus organized by your tour operator. But many towns in Central Bhutan are isolated and you might have to travel on foot to get to a few destinations apart from the major towns.

The roads are dirt roads and you should be up for a bumpy ride for most parts of it.

Generally, your stay will be organized by tour operators when you book the tour. If not you can always check out online options like booking.com and other sites to give you a good offer.

Most stays are in simple farmhouses or homestays as the Central part of Bhutan has not yet been developed for tourism.

How Safe is Central Bhutan

Here you do not have to worry about people, theft or robbery. But you do need to be aware of Bears. The area has a large population of bears, so be careful and take precautions when walking in isolated areas.