Casablanca is the cosmopolitan, industrial, and economic heart of Morocco, and its largest city. The awe-inspiring Hassan II Mosque and happening nightlife and architecture of colonial times buildings are worth at least a day of your Moroccan itinerary.

However, please note, Casablanca is a mixed bag of Moroccan extremes. On the one hand, you’ll find Casablanca the most liberal and progressive of Morocco’s cities. Yet, on the other hand, the poverty, prevalent in slums on the city’s outskirts, has led to high rates of crime, drug use, prostitution, and the rise of Islamism.

The ancient city of Casablanca was founded by Berber fishermen in the 10th century BC and was used by the Phoenicians, Romans, and the Merenids as a strategic port called Anfa.

The Portuguese destroyed it and rebuilt it under the name Casa Branca, only to abandon it after an earthquake in 1755.

Afterward, the Moroccan sultan rebuilt the city as Daru l-Badya and it was given the name Casablanca by Spanish traders who established trading bases there. 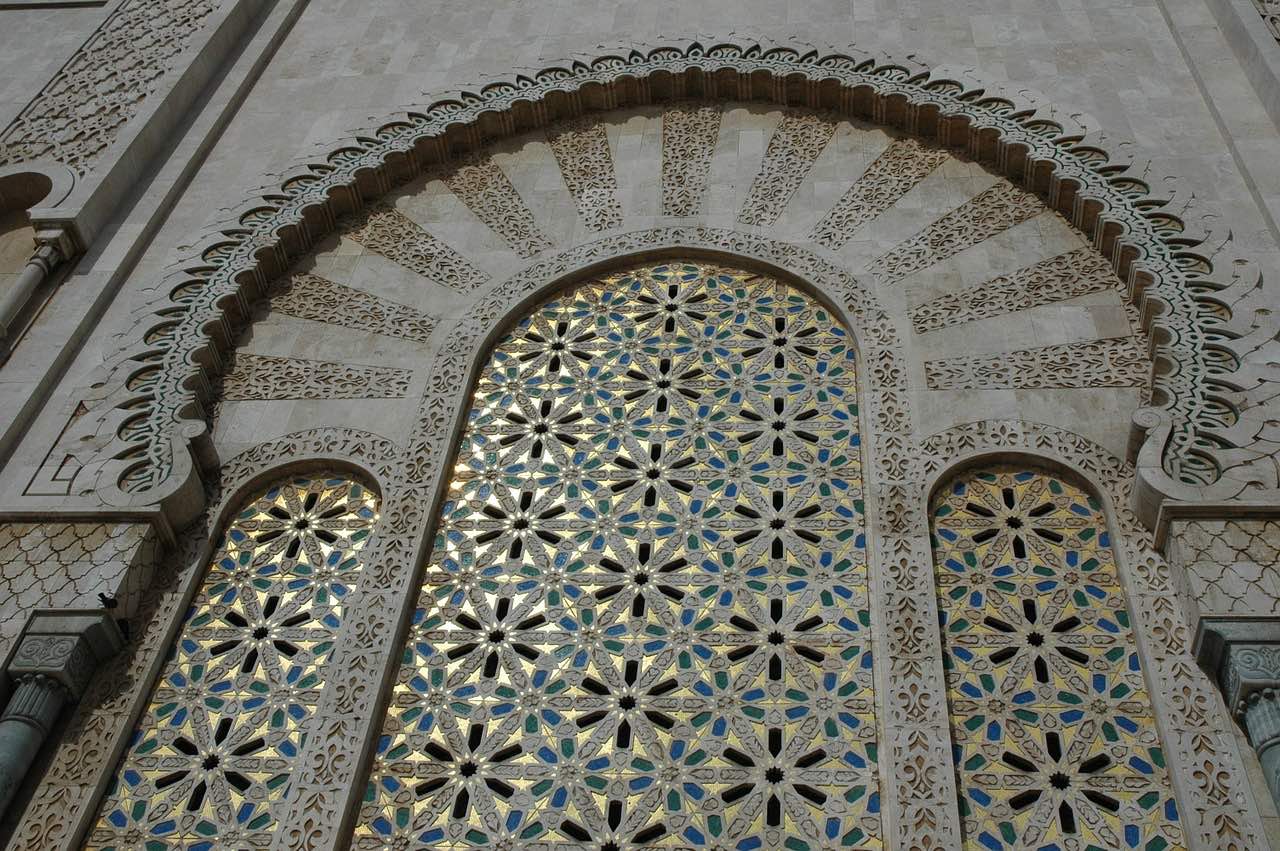 The French occupied the city in 1907, establishing it as a protectorate in 1912 and starting construction of the Ville Nouvelle, however, it gained independence with the rest of the country in 1956.

Things To Do In Casablanca 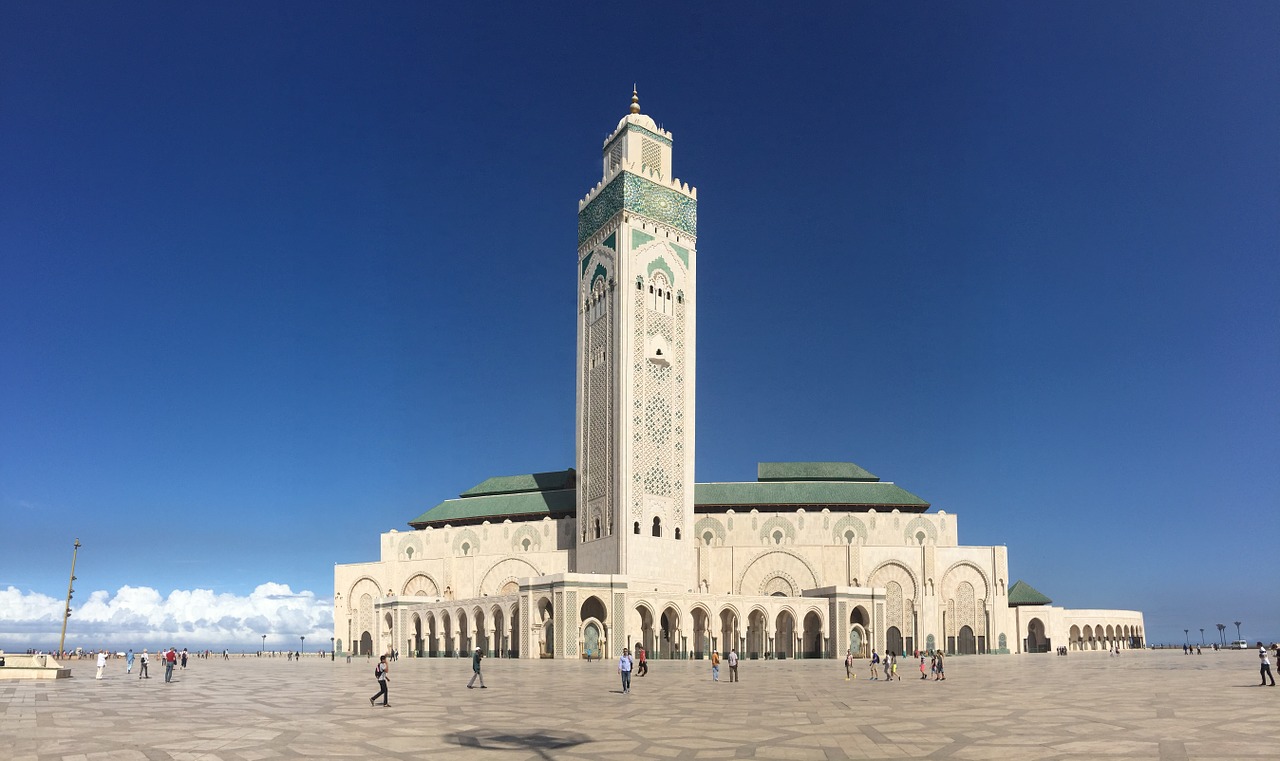 The largest mosque in Morocco and the seventh largest in the world, with the tallest minaret in the world. It opened in 1993, after 7 years of construction.

It is one of the two main mosques in Morocco open to non-Muslims. Beautiful interior complete with water features, a roof that opens to the sky, a huge hammam in the basement (not in use), and beautiful tile work. 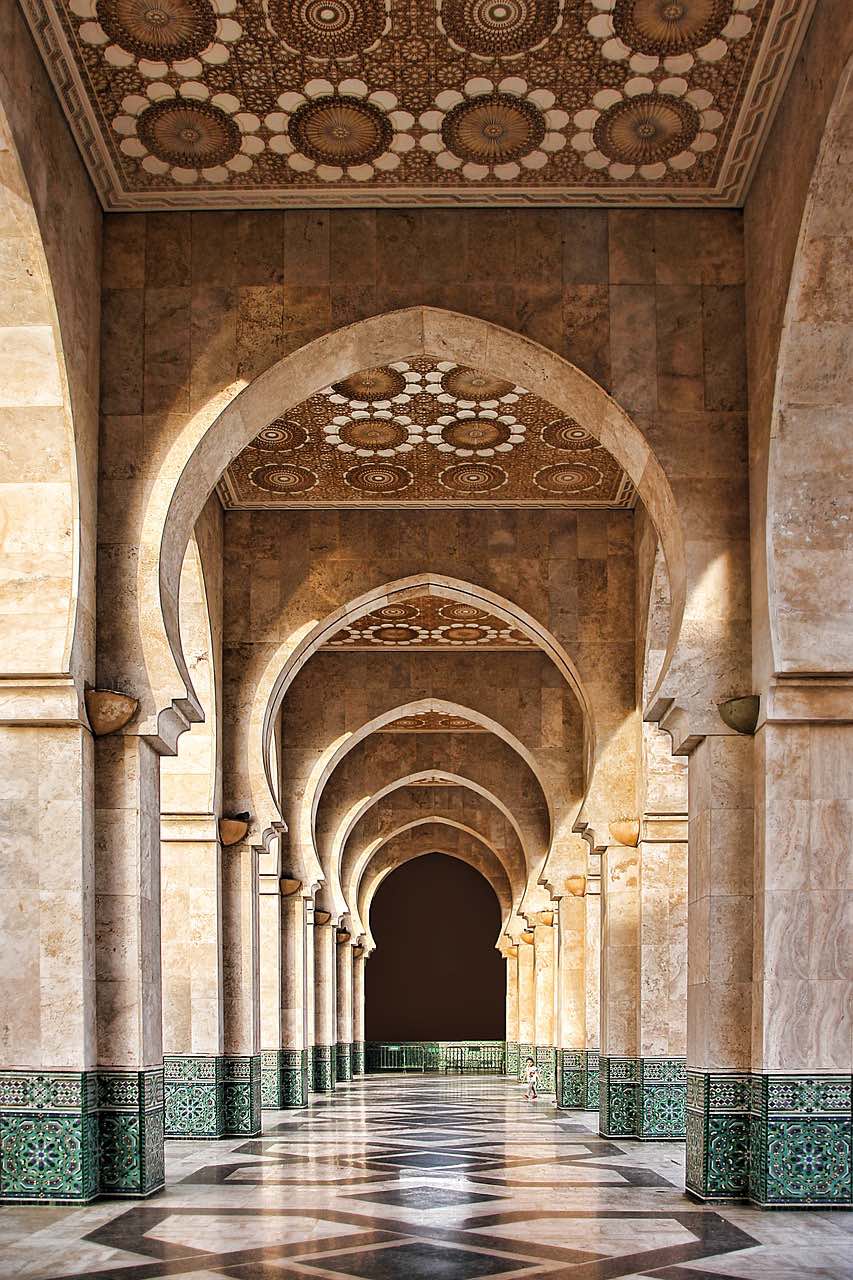 A neighborhood on the ocean, west of the Hassan II Mosque. Decades ago it was a thriving resort area – hotels line the ocean side of the Boulevard de la Corniche, and nightclubs line the other side.

Most look like they’ve seen better days. Along the Boulevard de l’Ocean Atlantique are many newer, fancier hotels. The Corniche is also home to many western fast food chains.

A new western-style movie theater can also be found here, but the best option is to walk up and down the street, resting at one of the many ocean-view cafes. 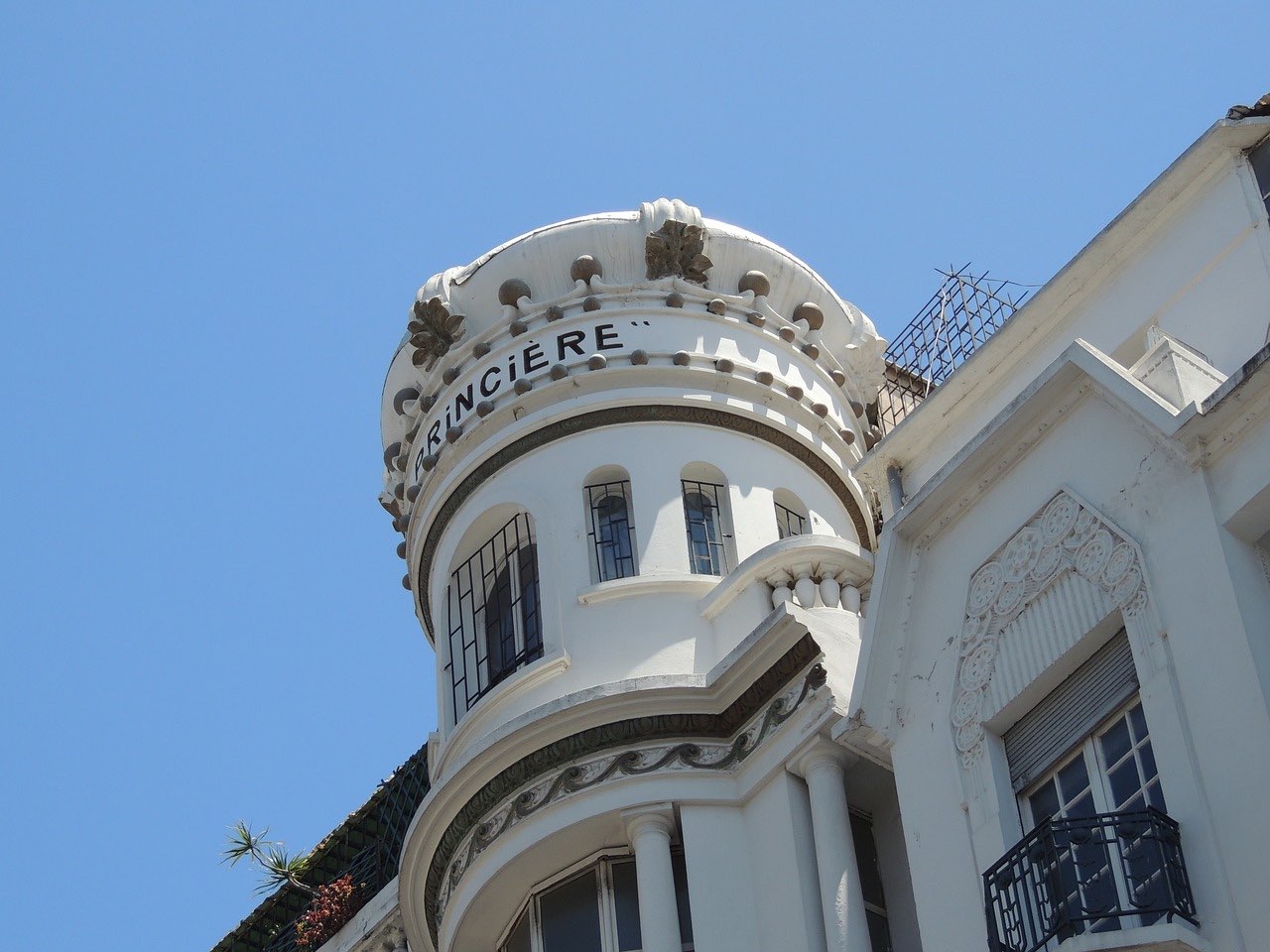 Built on a rock off shore, well past The Corniche, and only accessible at low tide. The shrine itself is off-limits to non-Muslims, but visitors are permitted to explore the tiny, medina-like neighborhood that has sprung up around it.

A better bet is to walk to it along the beach and catch a view of the beautiful white walls before taking a cab to less remote areas.

This is a Hispanic-Moorish building comprised of more than 60 ornate rooms with delicately carved wooden ceilings. There are many stuccoes and intricate wrought-iron railings as well as beautifully tiled floors.

While entrance may be free it is not easy to get in. You need to find a guide to accompany you. Ask around – especially if you speak some French – it is worth it. To get there take bus 81 on Boulevard de Paris.

Come here to send your postcards in style! Built in 1918, the façade is composed of both round and rectangular shapes. Once you approach you will get a good view of the excellent mosaics.

Located north of the Place des Nations Unies. There is a small traditional walled town in the north of Casablanca. Again, note, if you are in town it’s worth a visit, but it is nothing compared to the glories of Fes or Marrakesh.

This art gallery exhibits a bizarre collection of modern welded sculptures by artists from all over Morocco.

This is one of the best places to see modern Morocco. Businessmen come out in droves at lunchtime to have their food in the sunshine on this modern city square. Great chances to take beautiful scenery shots too.

Located slightly southwest of Parc de la Ligue Arabe on Bvd Brahim Roudani. Run by the charity ONA, it is a place for the Moroccan art scene. free of charge. 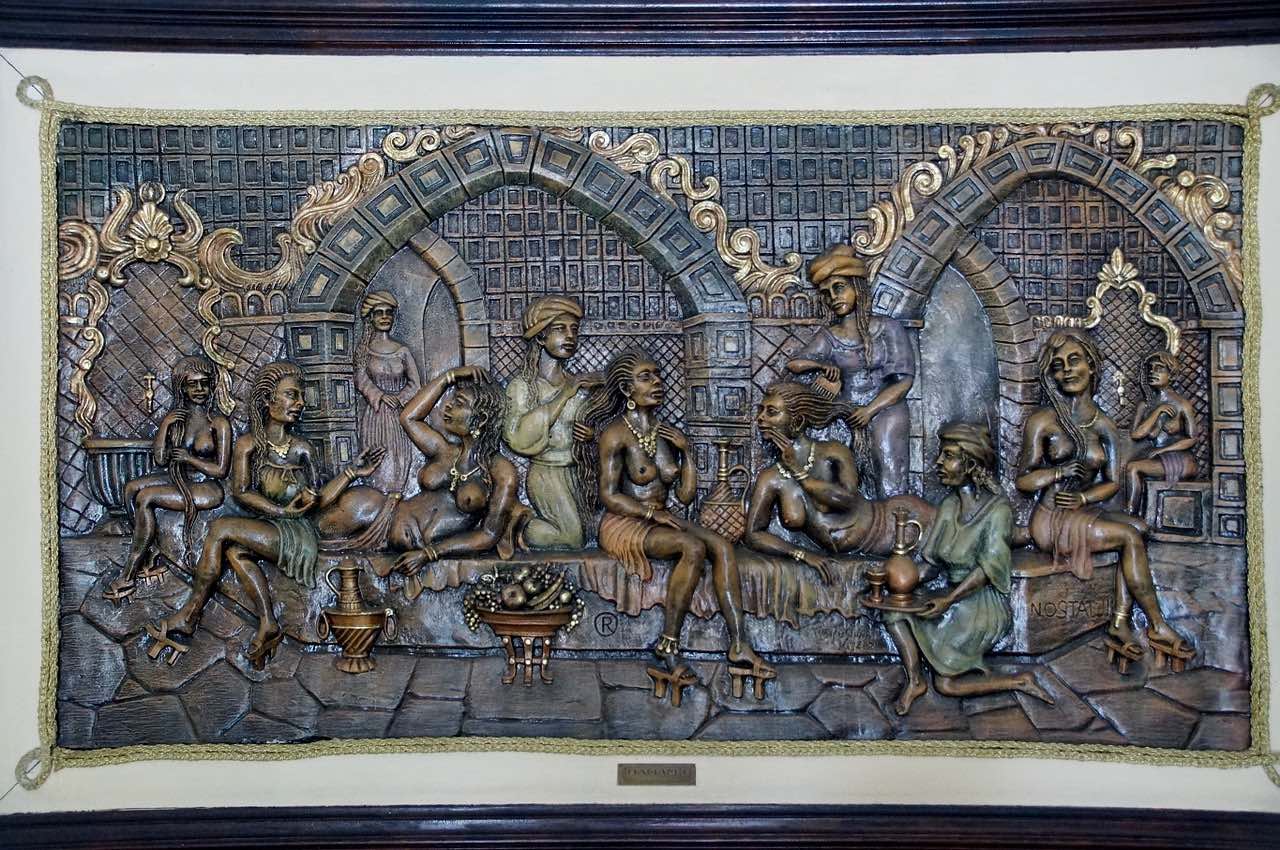 Hammam means Turkis Bathhouse in both Arabic and Turkish. By the way, if you are curious, a Turkish bath is a type of bath in which you sit in a very hot steamy room, then wash, have a massage, and finally swim or shower in very cold water 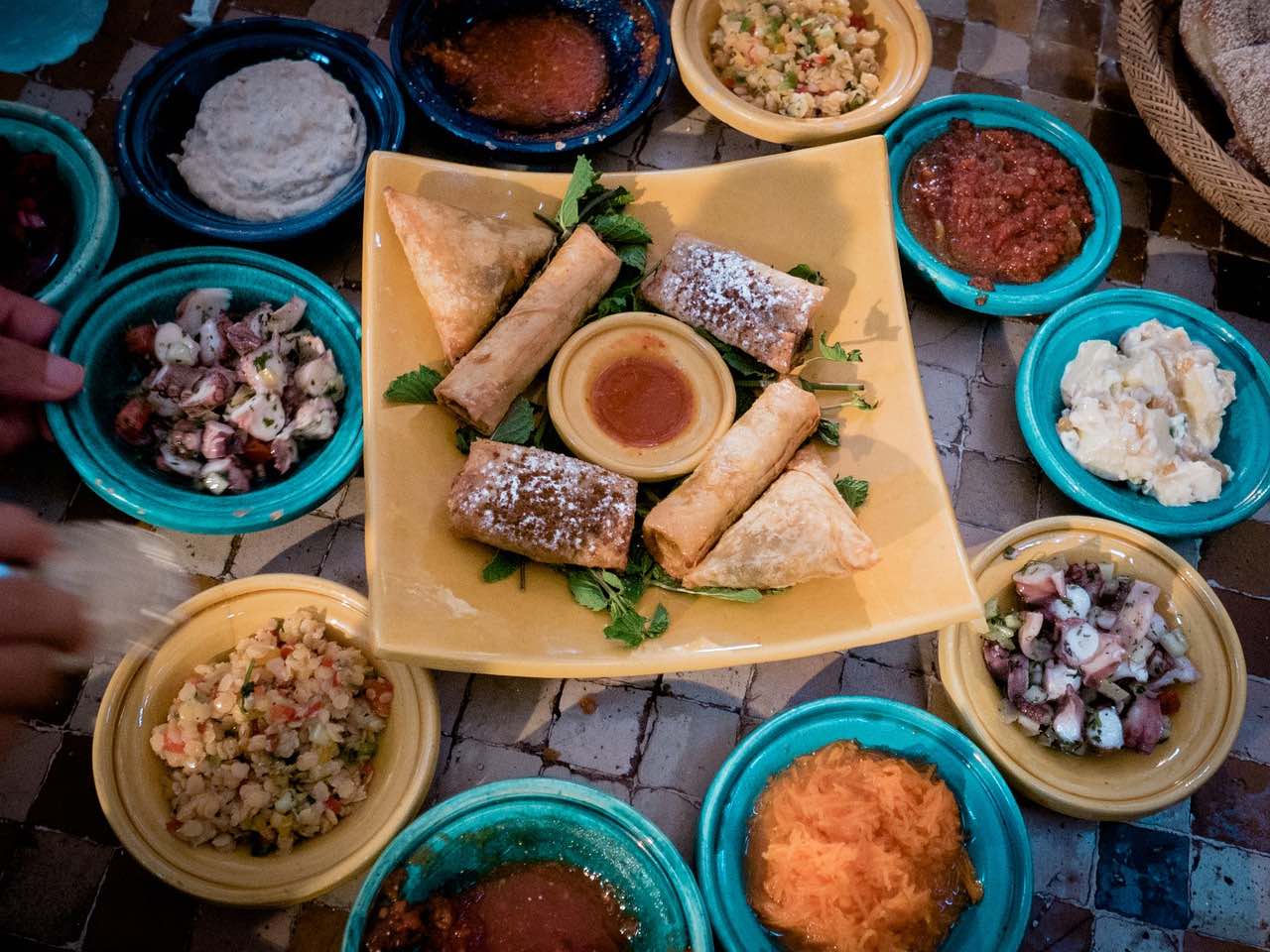 Note: Restaurants in Morocco are like restaurants in Spain – they don’t open until around 19:00 at the earliest, and most people don’t eat until much later. Be sure to call first and make sure your restaurant of choice is actually open.

Casablanca is served by all of the mobile companies that can be found elsewhere in Morocco. Inwi, Orange, and Maroc Telecom are the most common.

Mobile phones can be bought in any of these store’s stands, and most do not run on calling plans. Rather, recharge cards can be bought in corner stores that contain a number to call. When that number is called, the company adds the price of the card to your account’s balance.

Alternatively, more than one SIM card can be bought and changed in and out of the phone, if users need more than one phone number.

Internet access is available in cyber cafes around the city. Service is usually around €1 per hour.

Wifi: You’ll find wifi access in many hotels and in some places such as America Café or La Brioche Dorée, usually those labeled a bit “trendy”

Mobile Internet: Phone companies offer mobile internet services that plug into the USB port of your computer (there are no Mac-compatible devices.) These services can be had without signing a contract, and are recharged in the same manner as a telephone.

How Safe Is Casablanca

Almost all of the things to see in Casablanca are in the north of the city; very few maps even show the southern end of this sprawling metropolis. Common sense will alleviate 99% of problems; try to look as little like a tourist as possible, do not flash large quantities of cash, and so on.

Faux guides are much less of a problem here than in the rest of Morocco and are limited mainly to the area around the Old Medina. It is inadvisable to walk alone in Casablanca at night. Women, as in all Moroccan cities, should dress modestly to avoid harassment (which almost always consists of lewd comments, but nothing physical.)

Casablanca is unlikely to provide North American or European travelers with any headaches. Despite being a major population center and seat of commerce, the majority of the town is less than 50 years old and could easily be mistaken for Los Angeles or Madrid.

Food is as European as it gets in Morocco, with pizzas and hamburgers as frequent as tajines and couscous. In some areas, such as the Maarif and Gironde neighborhoods, seeing a man in a djellaba or a donkey pulling a cart of vegetables are rarities. If even the trappings of Moroccan culture such as these are too much for you, any hotel bar or restaurant is going to be just like home for a few hours.