Andhra Pradesh is a state in Southern India that is bordered by Karnataka, Tamil Nadu, and now the new Telangana. It is mainly comprised of the coastal Andhra and the interior Rayalaseema and is home to numerous beaches and temples located all over the state.

The most notable and visited place in Andhra is the Tirupati temple. Known as one of the richest temples in the country, people flank in huge numbers to get a glimpse of the diety. It also has several beaches in its coastal districts such as Rushikonda, Mypadu, Suryalanka etc.

Things To Do In Andhra

Andhra Pradesh a lot to offer. If you are into temples, you have Tirupati. If you are into nature, you have numerous caves such as Borra Caves, Undavalli Caves, and the country’s second-longest caves named as Belum Caves which is described as the Grand Canyon of India.

If you are looking for relaxation, visit the hill stations or the beaches, its valleys as summer can get unbearably hot in many cities. Or, head to one of the awesome beaches!

Visakhapatnam, also known as Vizag, it is famous for its beaches, caves, and the Eastern Ghats as well as wildlife sanctuaries. About 30% of the city is covered with greenery. Major landmarks in the city include their lighthouse, Beach Road, VUDA Park, Visakha Museum and Matsyadarsini (an aquarium).

The beach road along the Sea

The INS Submarine Museum and Anti-submarine warfare aircraft museum opposite to each other is the only of its kind in the world, both the hunted and hunter of the wars. Erra Matti Dibbalu (red sand dunes) situated between Visakhapatnam and Bheemunipatnam is a geo-heritage site in the country.

The capital city of Amaravati is known for its Buddhist history with the Amaravati Heritage Centre and Museum situated in town on the bank of River Krishna. The Archeological Museum has majestic Buddhist monuments, galleries and an elegant bronze statue of Lord Buddha.

The Dhyana Buddha Statue at the state capital of Amaravati

The state has numerous important temples and pilgrimage centers.

Tirupati is a pilgrimage city in the extreme southeast of Andhra Pradesh in Chittoor district. It is also called Tirumala (called as Tirumala Tirupati), which is a sacred temple town famous for Sri Venkateswara Temple. It is one of the most ancient and sacred sites in the country. 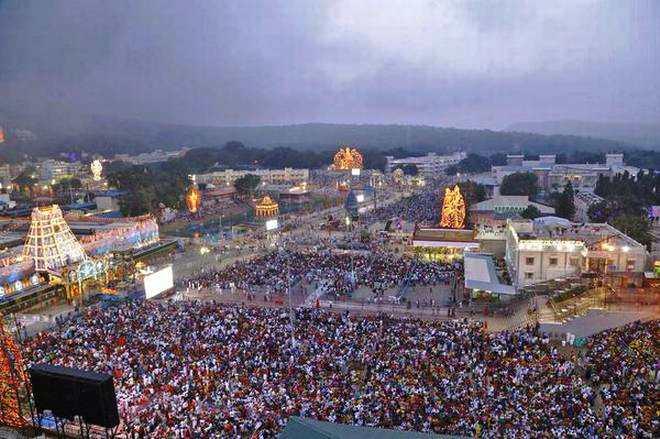 The crowds at Tirupati (It is crowded every day!)

It is one of the important heritage sites in Andhra Pradesh highlighting the legacy of Vijayanagara Dynasty.

It was founded in the 16th century. ‘Lepa-akshi’, means a village of the blinded eye, because of a story of how the royal treasurer stole from the state treasury to build this temple and then blinded himself to avoid punishment. 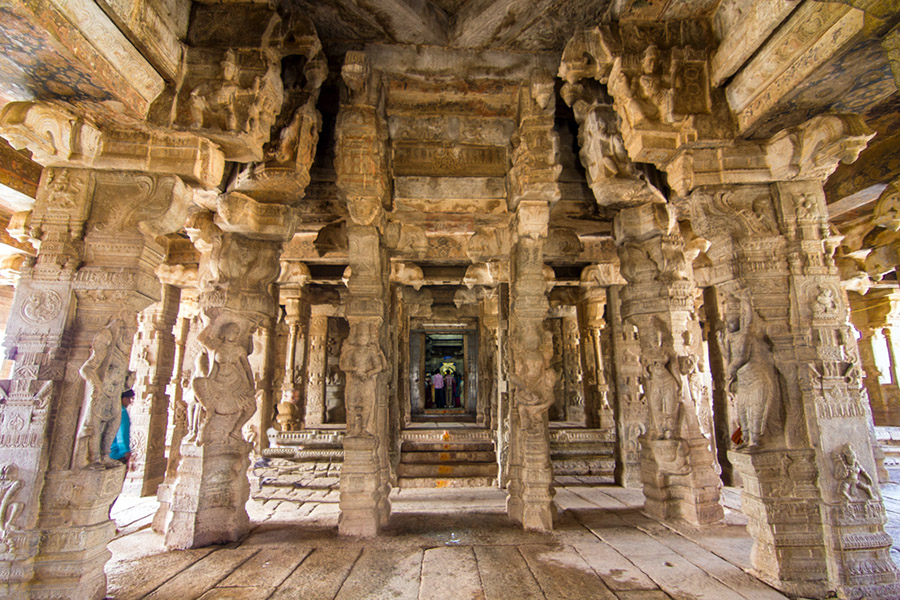 Lepakshi is the center of some of the finest temple architecture and paintings. Lepakshi consists of three important shrines dedicated to Shiva, Vishnu and Veerabhadra. It is known for a hanging column where you can pass a piece of cloth under it and it comes out the other end.

Srikalahasti, popularly known as Kalahasti is one of the ancient and most important Shiva Kshetras situated in Chittoor district of Andhra Pradesh. Srikalahasti is famous for Srikalahasteerswara Temple( Srikalahasti Temple) built in 10th century.

The entire temple was carved out of the side of a huge stone hill. This temple features 120 feet high enormous and ancient gopuram over the main gate. Visit during Maha Shivratri (Feb/March) 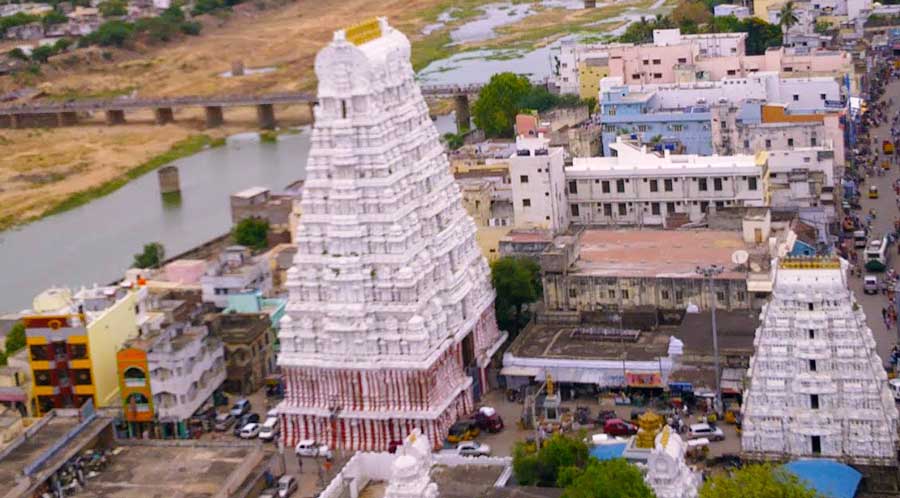 Located on the Eastern Ghats at an altitude range of 900 to 1400 meters above sea level, is home to a number of tribal communities. Spread over an area of 36 sq. km, Araku is a perfect tourist destination with a pleasant climate, lush greenery, waterfalls, and streams. It is popular for its famous coffee plantations.

Araku has some interesting places to visit including Borra caves, Tyda, Katiki Falls, Tribal Museum & Padmapuram Botanical Gardens. The coffee plantations are a must visit for those who want to indulge themselves in the flavors of nature. 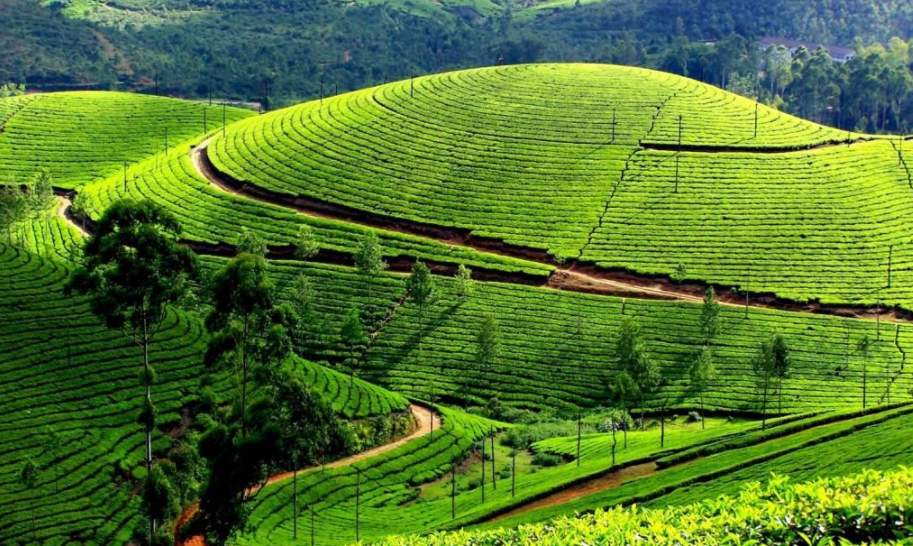 Plantation at the valley

Tourists can enjoy tribal folk dances like Dhimsa and Mayuri. One can also visit the Araku Tribal Museum which has rich tribal tradition and artifacts and displays related to Eastern Ghat Tribal Culture.

These caves, the largest underground structure open to the public in India is made of black limestone. It has a maze of sixteen cavernous paths ( with limited ventilation and freshwater underneath ) and a pit cave entrance that makes this hidden gem accessible to adventure seekers 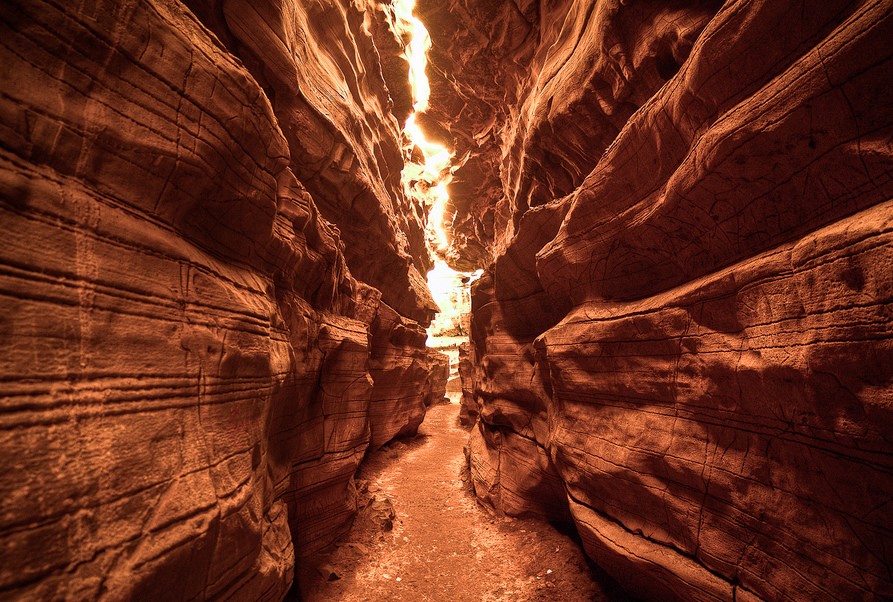 The narrow path through limestone at the caves

There are numerous natural formations and sinkholes all through the caves. There are numerous wonders like waterfalls which disappear into the lap of mother earth, a rock shaped like a bed with a pillow, recliner seating. Visit it to get into a magical underworld, with amazing rock formations.

Rajahmundry is ranked amongst the oldest cities in the Indian subcontinent. It was built by Chalukya king Rajaraja Narendra during the 11th century.

Rajahmundry is a blend of various qualities like picturesque landscapes, monuments of cultural importance, ancient temples and adventurous tourist spots that make the place unique, interesting and suitable for tourism for all ages. This is one of the major Pushkara Ghats on Godavari River which are held once every 12 years. It is a holy congregation which sees millions of devotees taking a dip in the River Godavari. The last Pushkara was held in 2015. 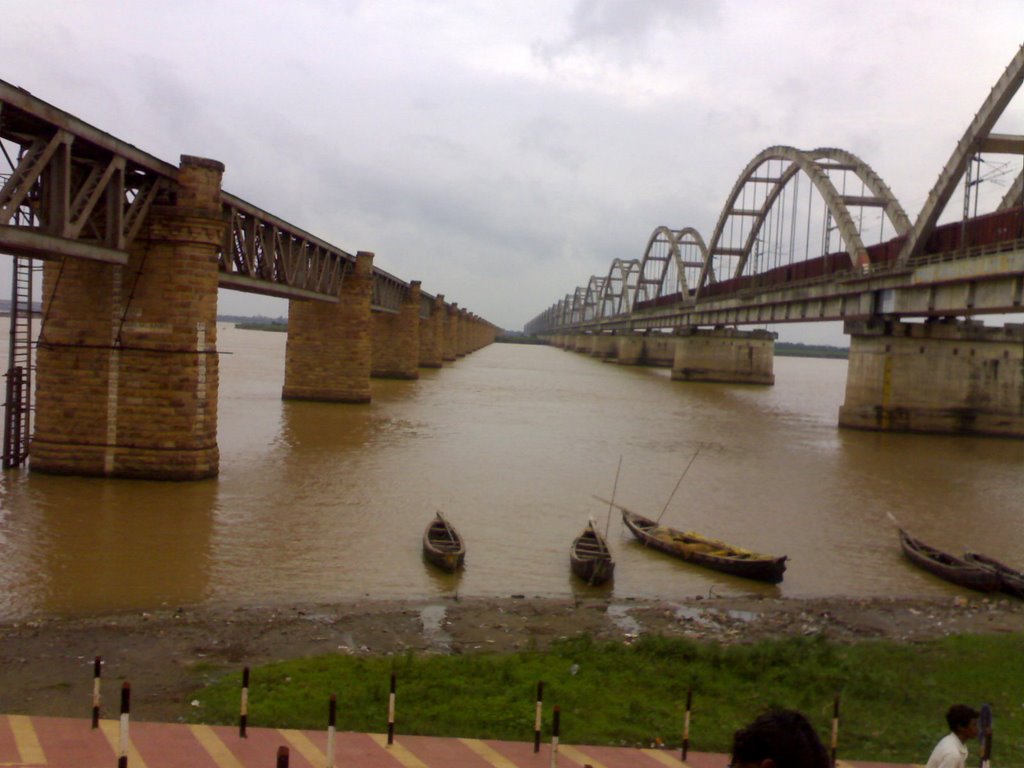 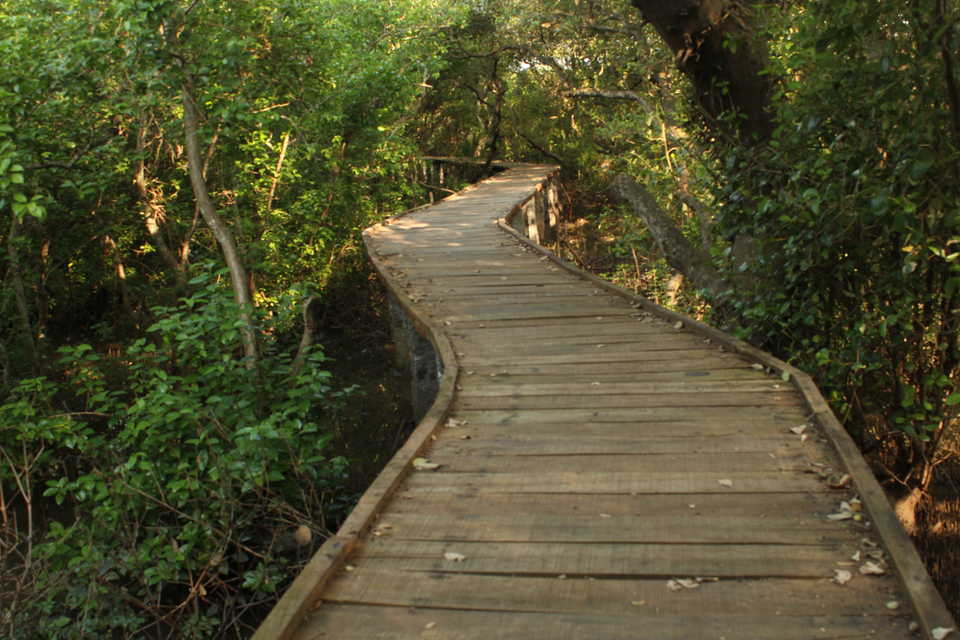 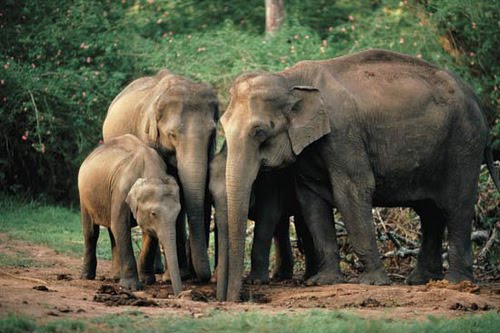 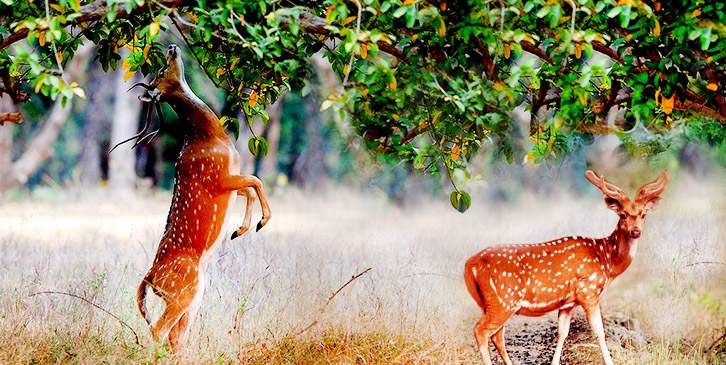 This beach located in Vishakaptnam is famous for its clean water and well-maintained shore.

Bheemunipatnam popularly known by its abbreviated form Bheemili is a neighborhood in the city of Visakhapatnam, India. The town was named after Bhima a character in the Hindu epic Mahabharata and has numerous beaches along the coast. 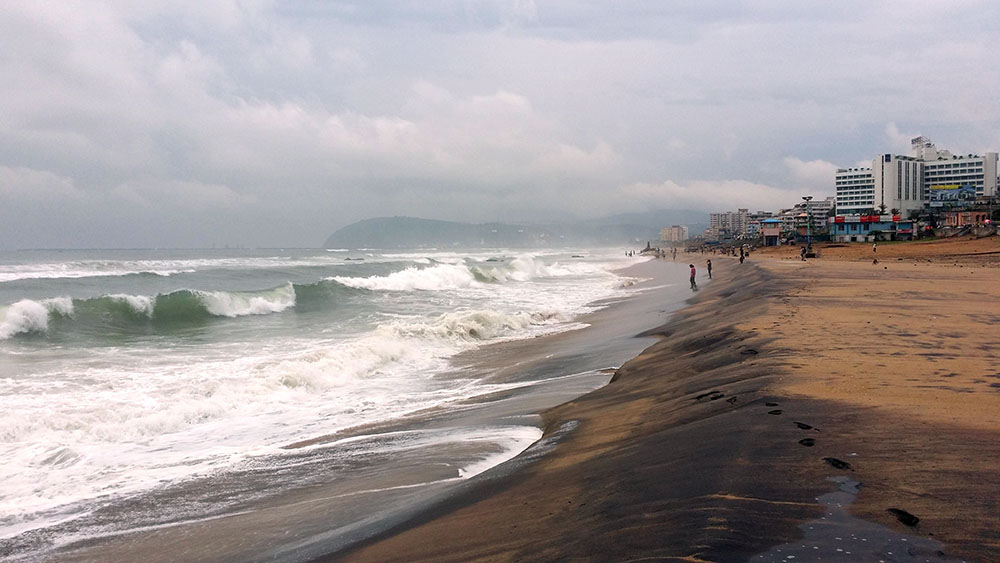 Adventure seekers should head to these spots:

Weather is hot for the most part of the year with high humidity along the coast and relatively dry in the interior areas. The monsoons in June and the return monsoons in October provide adequate rainfall for the rain-dependent agriculture in the state.

The best time to visit is November until February when it’s relatively cooler. The hottest months are April, May, and June and is best avoided.

This state has rich art and culture. It is best known for its dance form called Kuchipudi, which originated here. 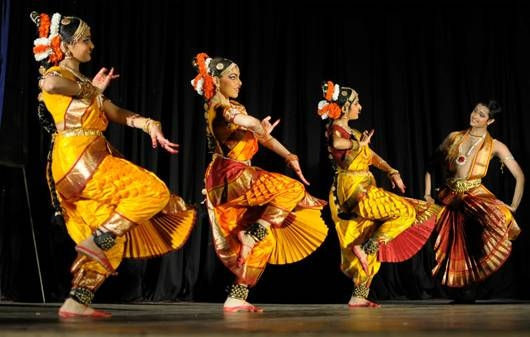 Machilipatnam and Srikalahasti Kalamkari are the two unique textile art forms practiced in India. There are also other notable handicrafts present in the state, like the soft stone carvings of Durga. Lac industry is also famous, producing lacquered wooden products.

Many famous Carnatic singers are from this state. The Telugu film industry is the second largest in India after Bollywood. Might be worth catching a movie in any of the local theatres to understand the fanfare.

Telugu is the official language and is spoken by the majority of the populace. However, most educated people will also be able to speak Hindi and English.

English is widely spoken in major cities. Minimal knowledge of Telugu is extremely useful, though not essential. 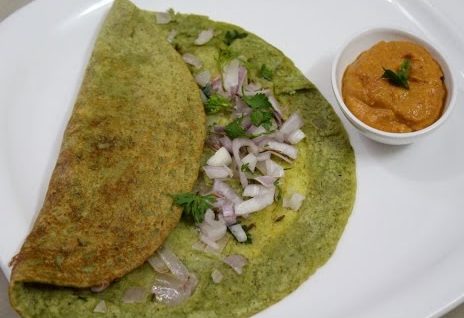 But the most famous and worth trying dish is their Biriyani. Flavored rice, with all the right spices served with raitha (yogurt with cucumber, onions, and tomatoes) is a must-have in this state.

A plate of Chicken Biriyani

There is no international airport in Andhra Pradesh. Visakhapatnam, Vijayawada, and Tirupati are moderately busy airports that handle domestic traffic.

You can also move from one part of the state to another by train. Most of the major cities are connected by a network of trains and it is convenient. You can book your ticket from IRCTC.

Local state buses are also an easy way to traveling around the city. APSRTC is their state-run buses which are safe and connects you from one place to the other. You can even check for private bus deals on online sites like Redbus

You can also take autorickshaws to get from one place to the other within the city. App-based taxi services like Ola and Uber also run in the major cities.

There is a variety of accommodation available. There are cheap hotels, known as lodges because hotels are generally understood to be eating places. There are private hotels as well as government-operated guest houses called Punnami Hotels.

If you want to splurge there are numerous 5-star hotels and resorts in the main cities and tourist towns for you to indulge in. Depending on your budget you can check in on online sights like Make my trip or Yatra to get the best deal.

How Safe Is Andhra

Always try carrying a mobile phone and always keep emergency numbers like 100 for police, 101 for fire and ambulance and 104 for health emergency with you.