A strange yelping noise echoed up the cliffs to meet me. The noise rose and fell on the wind and sounded much like a crying baby.

I quickened my pace along the dusty path eager to see down into the coves. Another gust of wind brought more plaintive cries to my ears.

I reached the headland and stopped short on a grassy bluff and peered over the crumbling edge. Far below me was a shingle beach that teemed with activity. 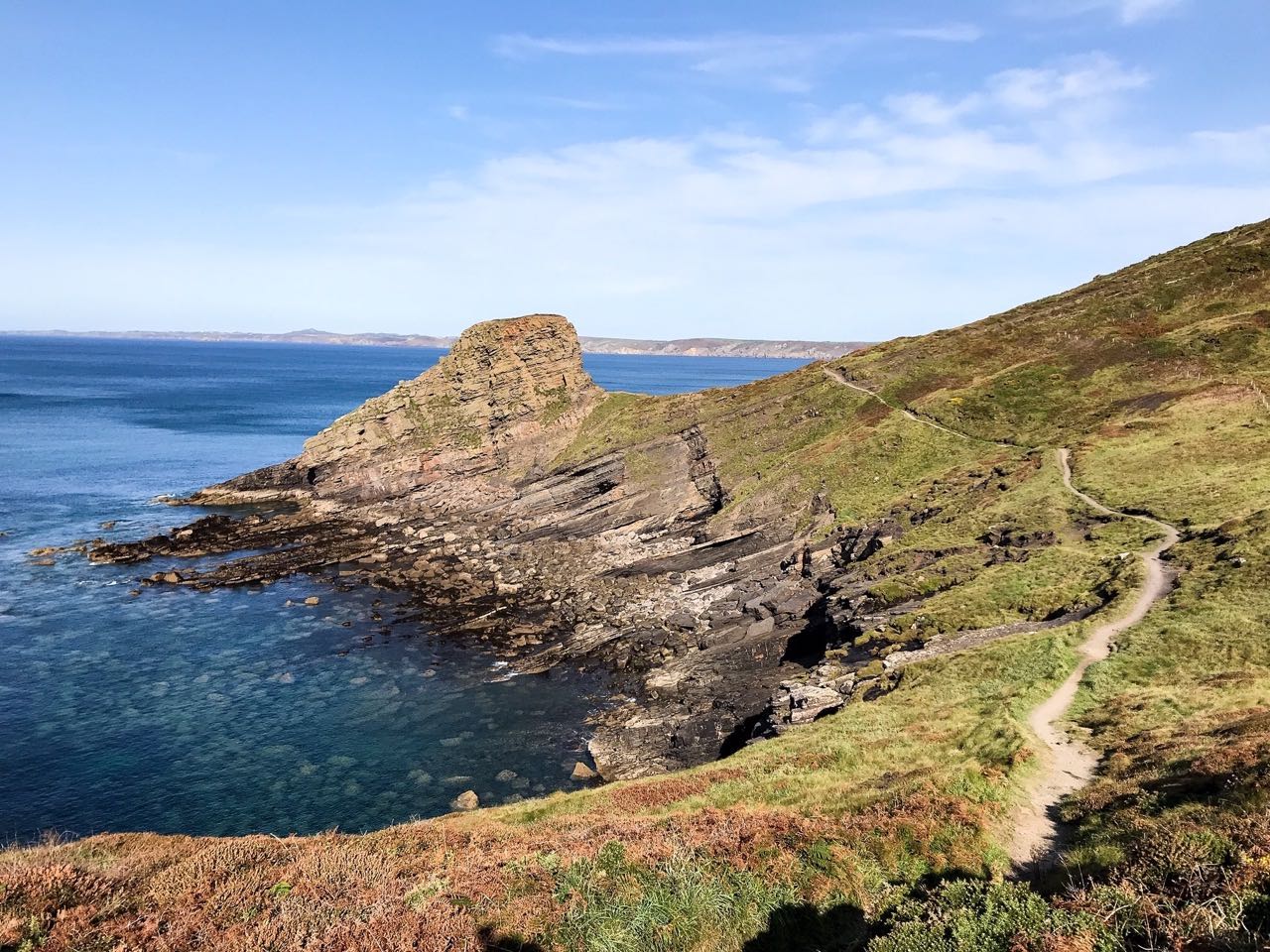 Large figures moved in and out of the turquoise waters, their grey bodies dipping into the surf and diving amongst the waves.

Farther up the beach one of these creatures advanced past the tide line and slid ungracefully across the sand into the foaming sea. I couldn’t believe my eyes. A colony of Atlantic grey seals, right here in the UK. 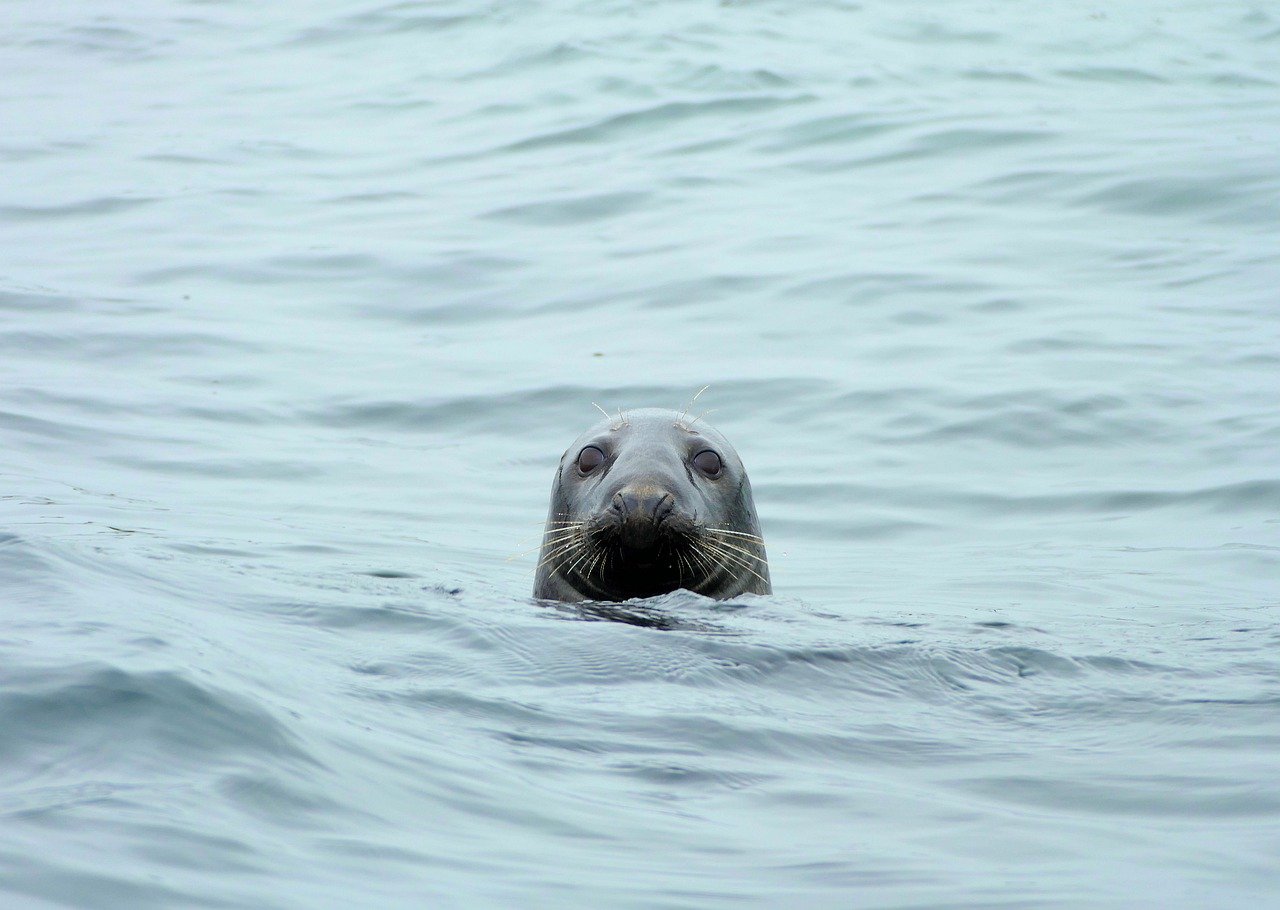 This incredible evening occurred in mid-September whilst I was walking the Pembrokeshire Coast Path – a 186-mile National Trails hike located in the south of Wales. 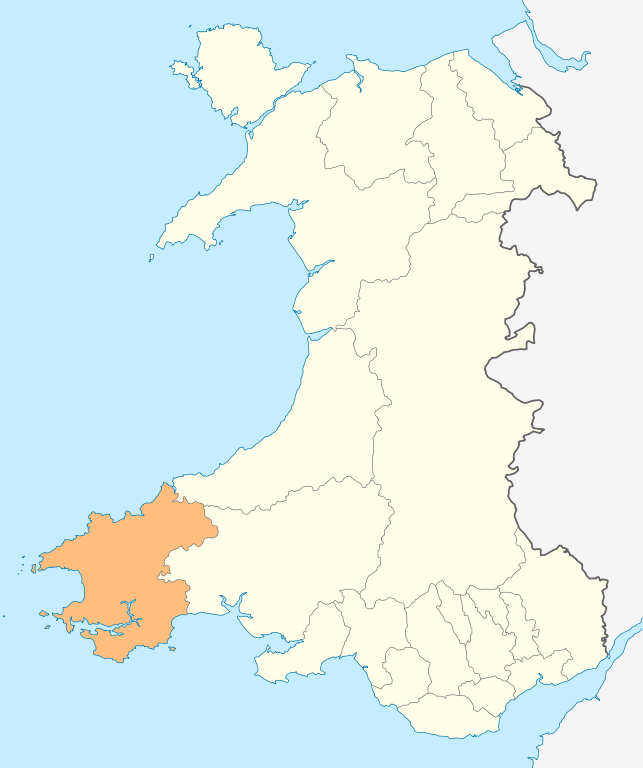 The route crosses 35,000 feet of ascents and descents which is equivalent to the height of Mount Everest!

The path is populated by 14 harbors and some bigger fishing villages such as Tenby, Pembroke, and Fishguard.

It is renowned for its rugged heathland and windswept landscape due to the harsh weather that blows off the Irish Sea. It has 58 beaches and is, for the most part, a relatively untouched area of coastline. 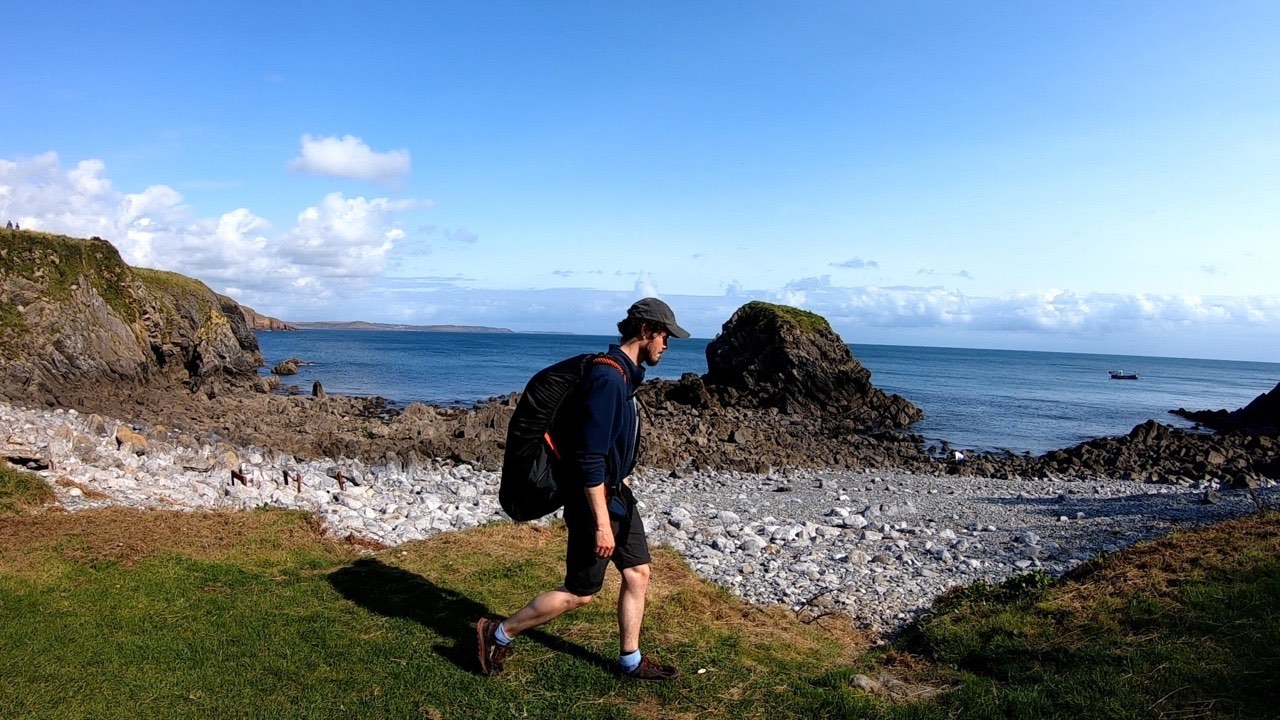 It was this level of wilderness that attracted me to walk the path in its entirety. Following a series of travel restrictions and lockdowns in the UK, I felt an urge to spend some time exploring the local National Parks in my home country rather than planning to jet abroad only for the trip to get canceled.

Prior to this, I’d walked the 84-mile Hadrian’s Wall Path in northern England. This hike stretched from the east to the west coast which amusingly gave me the right to say I’d walked across the UK.

Despite this, I still wanted to step it up. I felt I had more in me and yearned to do something even more adventurous. 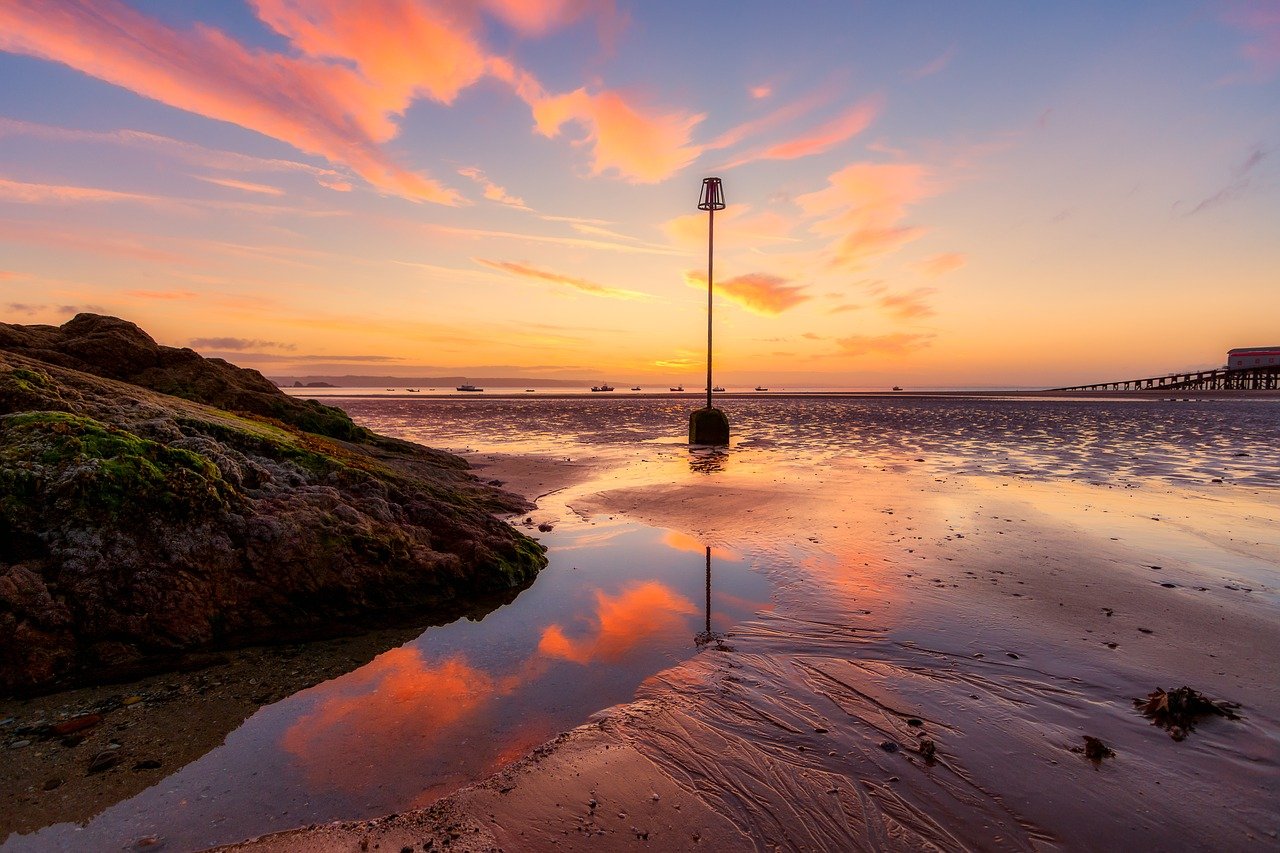 The Pembrokeshire Coast Path seemed like the perfect challenge I’d been looking for. It gave me that added element of raw nature whilst also allowing me to explore an area of the country I’d never visited before. 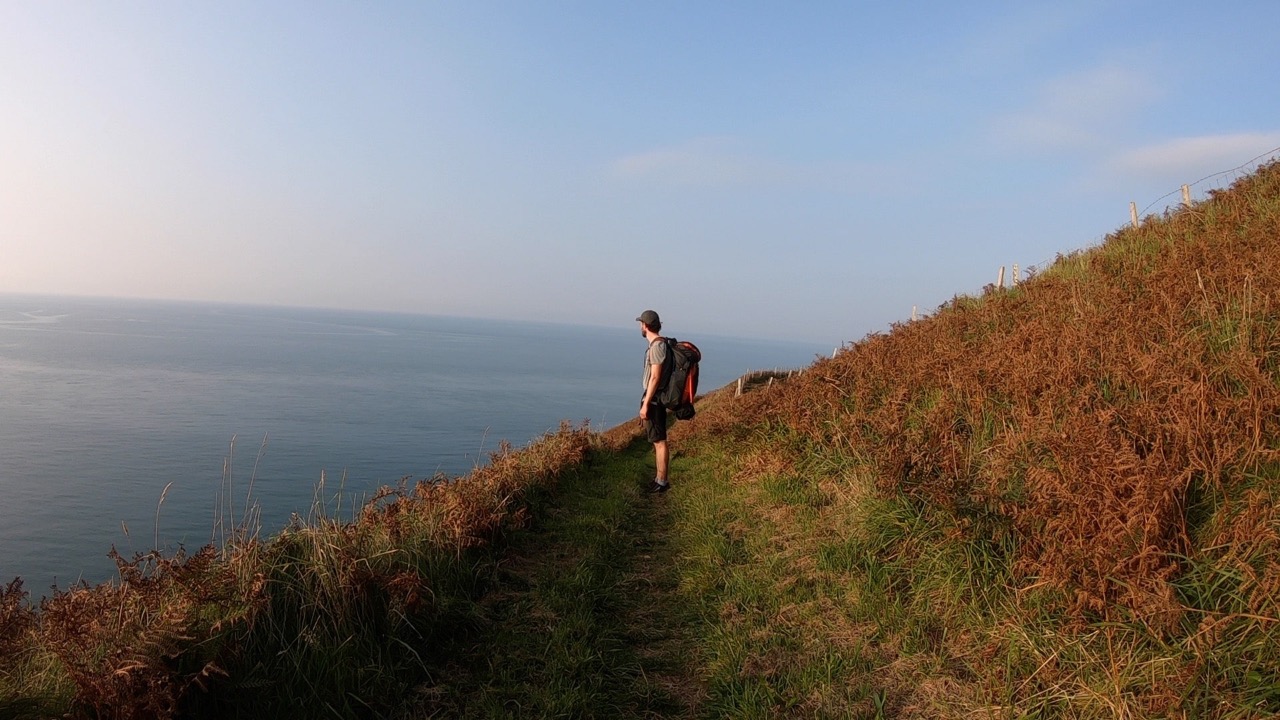 In fact, the path is known as “Gwlad Hud a Lledrith” in Welsh, which means “The Land of Mystery and Enchantment”, and it’s this remoteness that makes it the perfect home for a breeding seal population.

During the autumn, adult seals flock to the secluded beaches and hidden coves of the Pembrokeshire Coast National Park to raise their pups.

Throughout the rest of the year, there’s only a small population in the area and it’s unlikely you’ll see any – let alone up close on the beaches. However, during the 3-4 weeks where their pups can’t swim, the colony remains close to the shore at all times.

Despite knowing this, I still felt strangely aloof about the whole thing. As if it was some myth that could never actually happen. The idea of being on an empty, sweeping beach in the UK watching a colony of seals teach their pups how to swim seemed too good to be true. 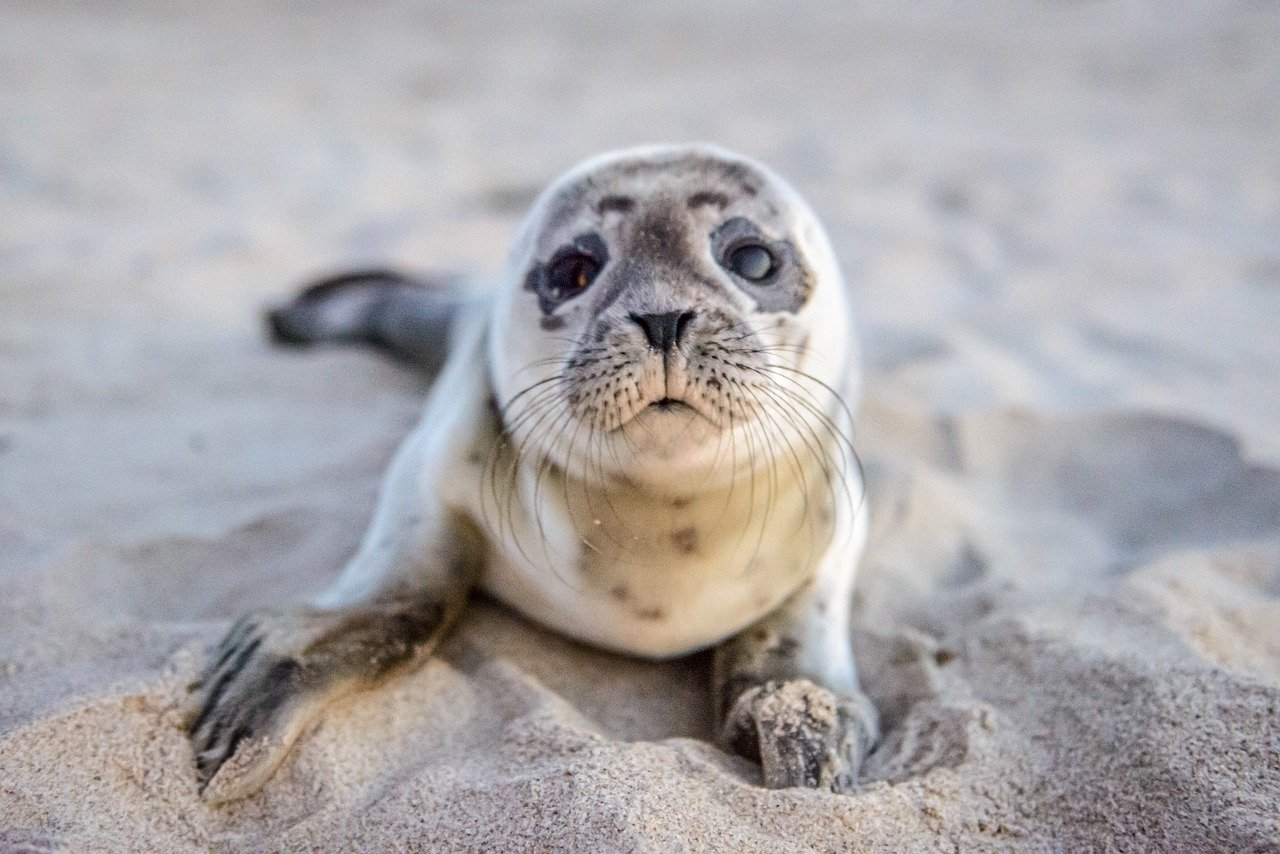 Yet there I was, witnessing exactly that. The more I stared, the more the animals seemed to appear from their camouflaged hiding spots amongst the rocks.

I began to recognize small white shapes, about the size of a house cat, flapping at the base of the crumbling cliffs. Those strange noises suddenly had their source.

The fluffy pups lay on their backs in the sun creating quite a racket, clamoring for attention. They moaned and cried out, calling for their mother’s milk.

I dropped my heavy backpack on the floor and sat beside a patch of ferns to watch the amazing natural dynamic unfold below me.

Occasionally the pups would fall asleep and go quiet, or sometimes a tired-looking mother would shuffle over and flop beside her pup for it to have a drink.

I was blessed with crisp blue skies and the cliffs were lit orange by the low Autumnal sun.

Rays of light illuminated the water so clear that I could see the adults diving down and foraging amongst the seaweed, catching fish and collecting crustaceans to eat.

They looked so sleek gliding under the water which only made it more comical seeing them try to move clumsily overland.

Some of the bigger seals rested out to sea glancing about with their whiskered heads bobbing up and down in the water.

From this distance, they looked much like dogs and I had to squint sometimes to convince myself otherwise.

As the sun lowered in the sky the calls and movements of the animals began to dwindle. Growing tired, I pitched my tent right there overlooking the cove. 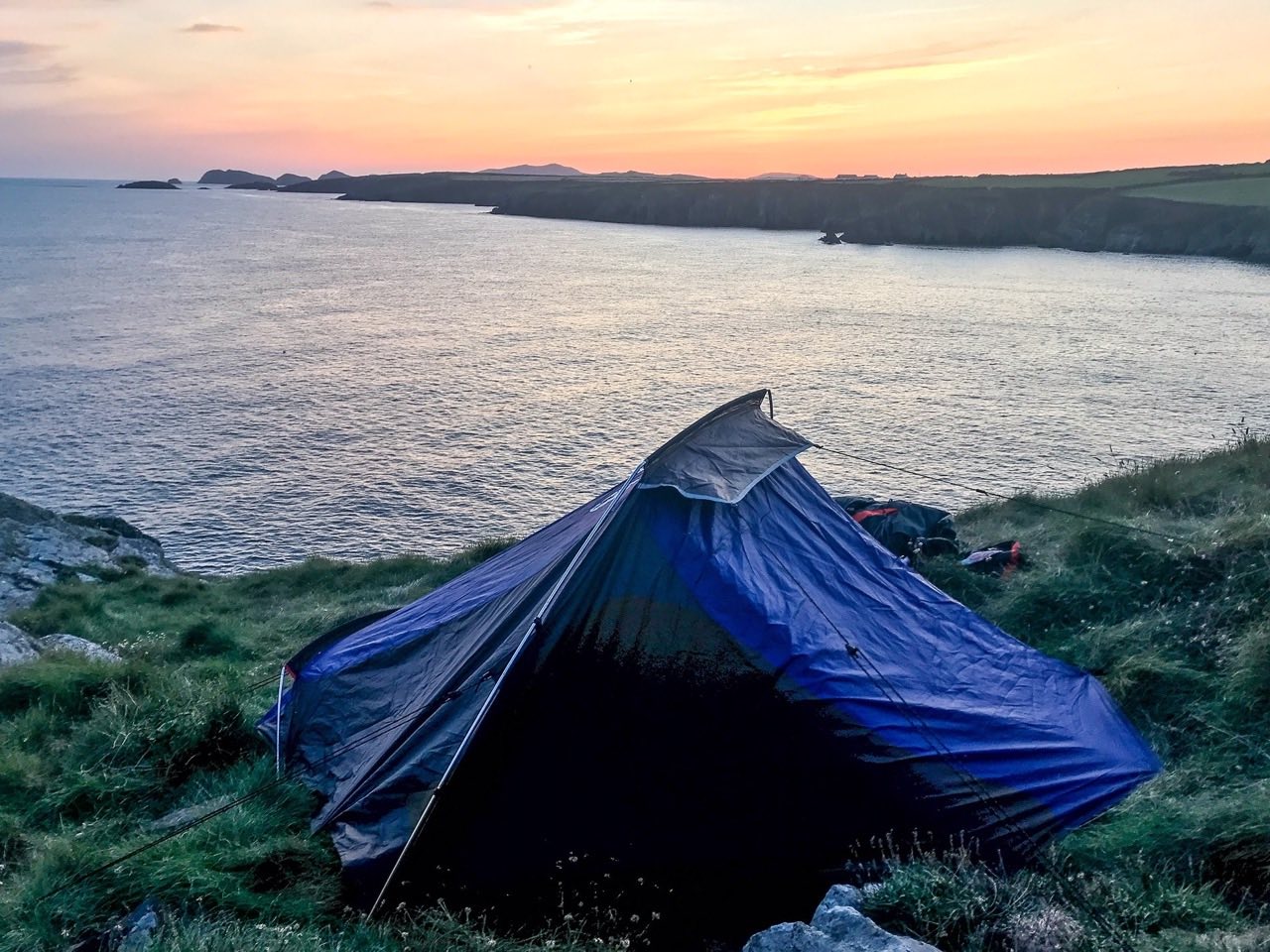 I set up my cooking equipment and sat staring at the seals, almost in a trance. The wind gently swept through the grass and rippled the canvas of my tent. The blue flame from my stove hissed and the water clicked and rolled in the pan.

I ate a pouch of spicy tomato pasta and sipped at a steaming mug of tea as the sky ran red and the animals fell silent. The shadows lengthened on the beach and the sea turned slate grey as darkness descended.

I put on my hat and gloves and watched my breath rise into the starlit sky. The moon drifted above the ocean and cast a white glimmer onto the tops of the cliffs.

I could see no glow of urban settlements on the horizon nor hear the sound of any human noise. Only the swash of waves and the occasional scuffle of blubber against stone. 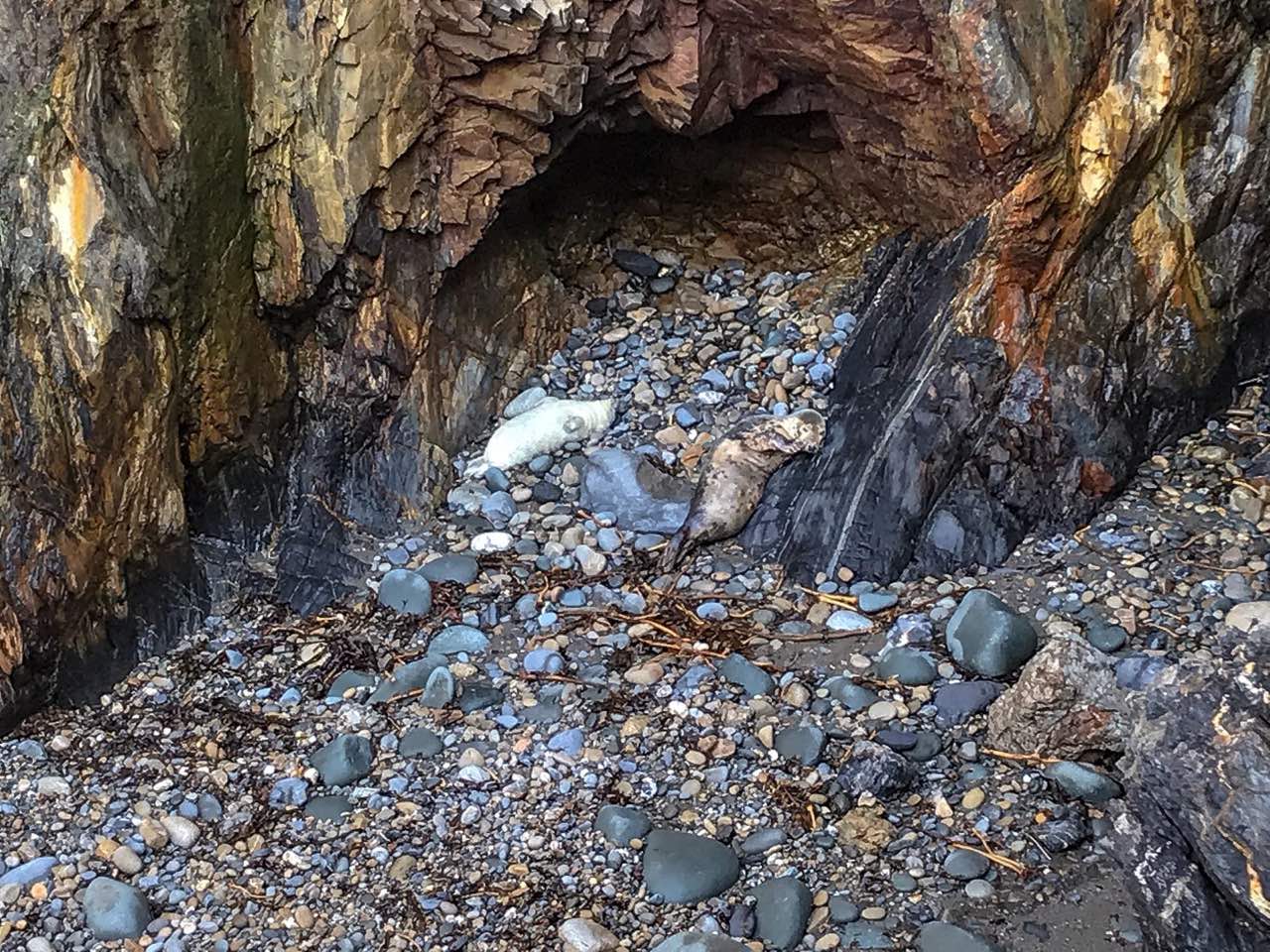 I lay in my sleeping bag that night thinking about what I’d set out to achieve on this walk. To have an adventure. To explore my home country. To find some of its untouched pockets of nature, and most of all, to have an experience I’d never forget.

As I drifted to sleep listening to the sound of waves lapping against the beach and a groaning seal roll over in the sand, I felt I’d accomplished exactly that. 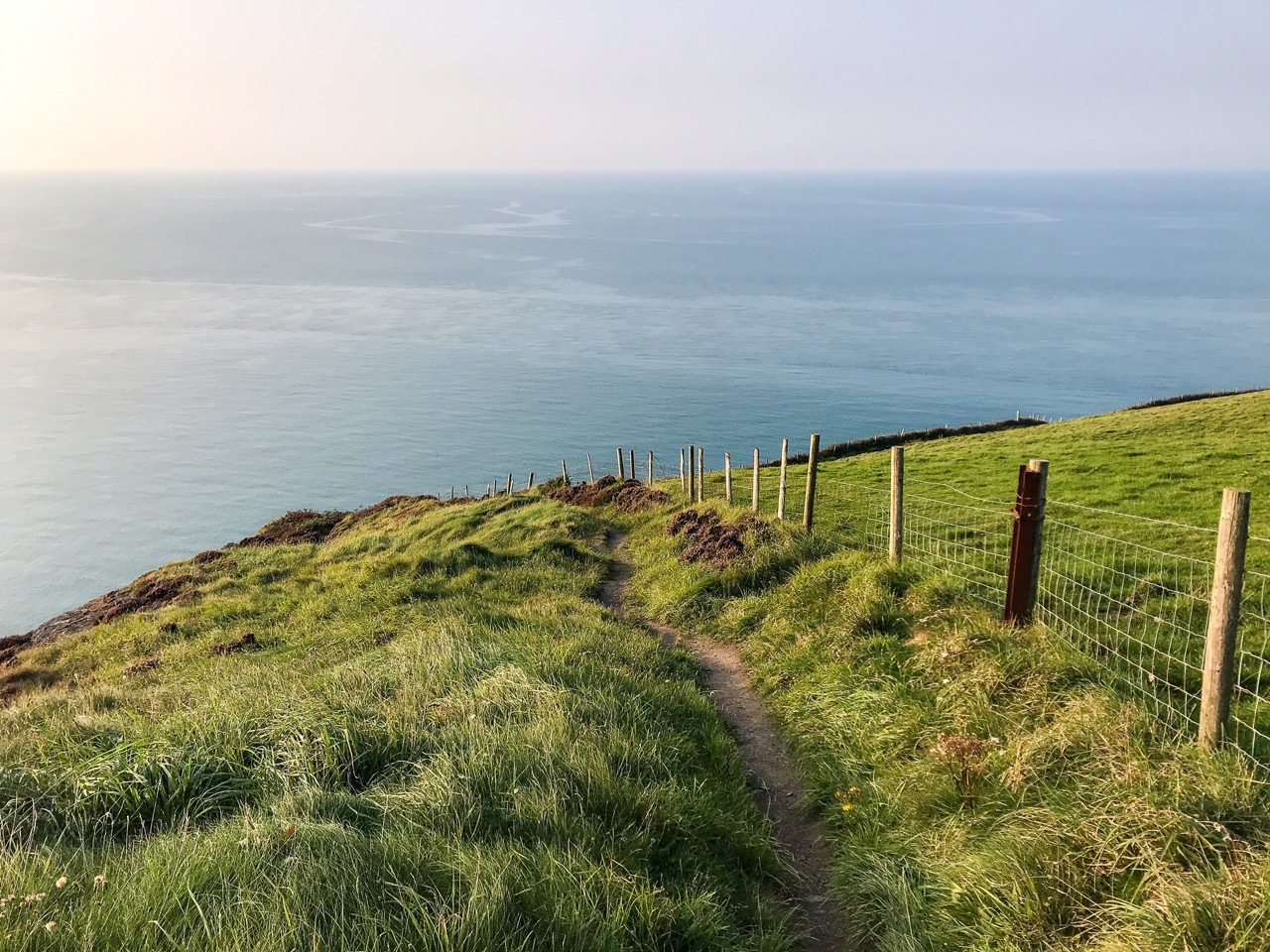 My name is Matt (Twitter @MattWalkWild). I’m a 24-year-old Biologist and adventure traveler. I’ve visited 42 countries around the world and particularly love wild and natural landscapes. I write about all things hiking, camping, and walking. I want to encourage others to experience the amazing outdoors and inform them about how to explore it just like I do! Check out my website: mattwalkwild.com